Why does the United States arm the Arab countries of the Persian Gulf? 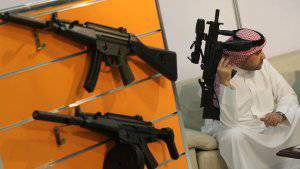 In the military doctrine of the Cooperation Council for the Arab States of the Gulf (GCC), only two countries today are considered potential aggressors - Iran and Iraq. Moreover, Iraq, before its occupation, was in the first place in terms of threats to the national security of the Arabian states, primarily for Kuwait and Saudi Arabia. Today, the main threat to the GCC is not considered Israel at all, as a collective enemy of the Arab nation, continuing to hold the Palestinian territories and Islamic shrines of Jerusalem, whose defender the Saudi king positions himself, namely the Islamic Republic of Iran, from which no threat emanates and which does not claims no inch of arab land.

В previous article The author addressed the issue of the US military presence in the Persian Gulf, noting that it is not limited solely to the presence in the region of military personnel, warships, aircraft and military bases of the United States, and includes such a component as supplies on a massive scale of weapons and military equipment (IVI ) in volumes that significantly exceed their needs to ensure security and defense against a potential external aggressor. As such, if we carefully analyze the military doctrines of the GCC in general, and each of its members in particular, are only two countries today - Iran and Iraq (previously Iraq, before its occupation, was in the first place in terms of threats to the national security of Arabian states, primarily for Kuwait and Saudi Arabia). That is, today the main threat to the GCC is not at all Israel being viewed as a collective enemy of the Arab nation, continuing to hold Palestinian territories and Islamic shrines of Jerusalem, whose defender the Saudi king positions himself, namely the Islamic Republic of Iran, which does not emanate any threat that does not claim any inch of arab land. This is also confirmed by the periodic statements of many high-ranking officials of the GCC countries, primarily the Saudi and Bahraini, as well as the United Arab Emirates, who accuse Tehran of occupying three disputed islands - Abu Musa, Small and Big Tombs in the Strait of Hormuz.

However, instead of creating a collective security system in the Persian Gulf with the participation of Iran and Iraq, including using Russian proposals to this effect, the monarchic regimes of the Persian Gulf prefer to go their own way within the framework of the regional military structures of the GCC. The reasons are as follows: First, the conservative regimes of Arabia are not satisfied with the republican system in Iran and Iraq, with its significant democratic attributes and election of power. Second, the United States and Great Britain do not want normal relations between the Arab countries of the Persian Gulf, on the one hand, and non-Arab Iran, on the other, otherwise how to deal with the principle of "divide and rule"? Third, the fear that large in terms of population of the territory and economic potential of Iran and Iraq may "absorb" the small principalities of Arabia, introduce them into the orbit of their influence, and hence reduce the influence of Washington and London on them. Fourth, the Anglo-Saxon desire to preserve the severity of the Sunni-Shiite conflict, artificially fomented in the West and in Israel, in order to prevent the unification of the Islamic world in the Middle East with its gigantic energy resources into a single whole with common goals to protect their interests, primarily oil, gas and political, from external players. Fifth, the fears of a number of GCC members, primarily Saudi Arabia, Kuwait, Bahrain and Qatar, that Tehran can use Shiite communities in them to shake the domestic political situation in the conservative Wahhabi and Sunni monarchies.

Hence, the warmed up US ambitions of the Council’s countries to create armed forces equipped with the most modern weapons and military equipment. Moreover, Washington not only earns huge amounts of funds for its military-industrial complex on military orders, but also has the Shield of the Peninsula in the person of the GCC armies and their general rapid reaction forces (SSR), including the most combat-ready parts of various military branches of the six member countries of the Council totaling about 20 thousand people, are based near the Saudi city of Hafr al-Batin, near the southern border of Kuwait, and are under the command of the Assistant Secretary General of the GCC for Military Affairs; They were in the 2011 year in the occupation of Bahrain to rescue the king from popular unrest, the main, along with Israel, ally in case of another armed conflict in the Persian Gulf, either a war with Iran or launching bombing attacks on its nuclear facilities.

In the interest of expanding and deepening the military-political partnership with the Arabian monarchies, in May 2006. Washington launched the program of the so-called Gulf Security Dialogue, which is implemented in the following main areas: 1) Discussion of issues related to ways and means of improving the defensive capabilities and combat capability of the Arabian Armed Forces; 2) Regional security issues (Iran, Lebanon, the Arab-Israeli conflict, etc.); 3) Problems associated with non-proliferation of weapons of mass destruction in the region; 4) Problems of combating terrorism and ensuring the internal security of the GCC countries; 5) Ensuring the security of the infrastructure of the Arabian states, primarily of the hydrocarbon industry; 6) Problems associated with the development of the situation in Iraq. The dialogue is a meeting of high-ranking political and military leaders of the parties every six months. From the American side, as a rule, the Minister of Defense, the head of the National Security Council, the chairman of the Committee of the Chiefs of Staff of the US Armed Forces, the commander of CENTCOM.

The following figures indicate the scale of US military supplies to the GCC countries. In total, from 1981 to 2006, playing the threat map from Iraq and Iran, the United States sold over $ 72 billion worth of weapons and military hardware to Arabian partners, of which Saudi Arabia was worth 57 billion. The United States intends to continue to carry out large military supplies to the GCC member countries. In 2010, Washington announced new plans for the supply of US arms and military equipment to the GCC countries. In the next few years, the Arab countries of the Persian Gulf will purchase weapons worth over $ 120 billion. The Pentagon has already announced its plans to supply XiNUMX F-84 fighter jets with various ammunition, missiles and material and technical support, as well as the modernization of 15 to Riyadh in service with the KSA Air Force F-70 aircraft. The sum of these deals alone amounts to $ 15 billion. Other US contracts with Saudi Arabia are also being considered, in particular, these are Apache Longbow Block III attack helicopters, some versions of multi-purpose transport and training helicopters, and air-to-air missiles - ground and air-to-air. In addition, in early April, Saudi Arabia 60 asked the United States for information on the cost of repairing and upgrading ships previously purchased in the United States. The potential amount of the transaction is estimated at $ 64 billion. At the same time, it is very significant that in 2011 Riyadh refused to sign a modest MTC contract with Moscow, although it was initialed. Apparently, the KSA realized that this kind of “handouts” could not buy Russia in terms of tightening anti-Iran sanctions.

Increasing the volume of military-technical cooperation with the countries of the Persian Gulf, the United States is actively exploiting the thesis about the threat from Iran. Washington has managed to convince the leaders of these states that Tehran is striving to possess nuclear weapons, to expand Shiite fundamentalism, to create a so-called "Shiite arc" or "Shiite crescent." At the same time, the US administration is not at all embarrassed by the fact that Iran’s spiritual leader Ayatollah Khamenei issued a fatwa (equal to the presidential decree) on the inadmissibility of creating nuclear weapons in the country. And to confirm this, literally the other day, the new Iranian President Hassan Rouhani from the rostrum of the 68 session of the UN General Assembly officially declared that Iran does not pose any threat to the world as a whole, or to the region separately, that there is no room for nuclear weapons in his country's military doctrine that iranophobia poses a serious threat to peace and security. On the contrary, they began shouting even more that the Iranian leadership was already inciting the Shiite communities of Bahrain, Saudi Arabia, Yemen, Lebanon and other Arab countries to speak out against the authorities represented by the Arab Sunni. Bahrain, where Shiite Arabs make up two thirds of the country's population, is considered to be the most vulnerable, but it is practically excluded from power. In Riyadh, they seriously fear that Shiite unrest in Bahrain could spread to the Eastern Province of KSA, where the richest oil fields are located and where the predominantly Shiite population is.

Hence the recent American initiative to create a regional ABO and ABM system, to which Washington has already been able to pull all the GCC countries. Within its framework, Qatar and the UAE have already announced their intention to purchase THAAD missile systems from Lockheed Martin for a total of almost $ 8 billion. In particular, Qatar’s application includes 2 THAAD batteries for 6 launchers each, 150 interceptor missiles , 2 fire control, 2 radar AN / TPY-2 and 1 radar early warning. Total worth 6,5 billion. And the UAE is planning to purchase 9 PU THAAD, 48 anti-missiles and related equipment worth 1,1 billion dollars. These complexes will also be purchased by the other four GCC countries, and they interact with other US missile defense systems, including the IJIS ship complex, as well as the Patriot, PAC-2 and PAC-3 ground systems, which are in service with most of the Council’s countries.

It is clear that all these weapons are intended to contain Iran and to prepare for a possible war with it, if Washington makes an appropriate decision. But plans for new purchases of American weapons only add fuel to the fire, given that in the light of the Arab "color revolutions" the situation in the Persian Gulf is already tense. And no matter how it happens that these weapons will be used against their own regimes by disgruntled masses of Arabian monarchies, if the “revolutionary flow” has reached them, given that the wind of democratic and political changes is already blowing on the peninsula, and the new generation of these countries wants to live by the norms of Wahhabism 18-th century.