30 September 2013
35
Heavy Tanks M6 series were produced during the Second World War, however, since these machines did not participate in hostilities, they are known only to a narrow circle of experts stories armored vehicles. Although the Heavy Tank M6 is technically rather interesting. Serious errors in the design and a large mass in many respects predetermined the fate of the machine. 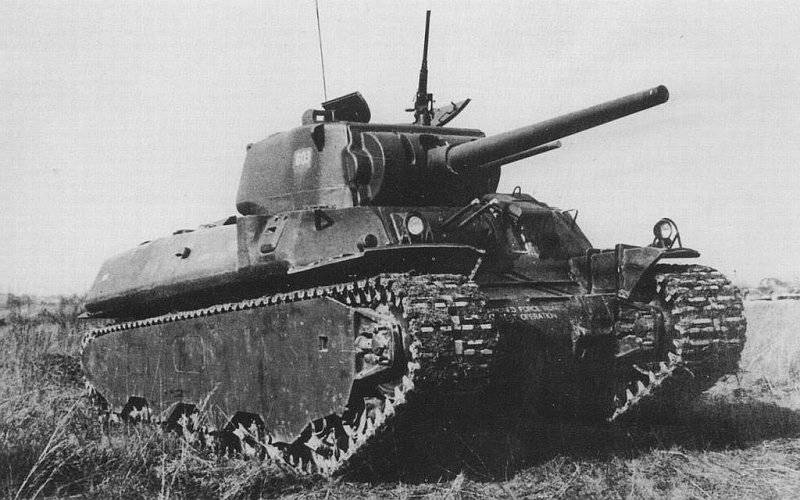 In the United States until the Second World War, tank production was practically neglected. Before 1939, there was not even such a unit, all tanks were under the command of the infantry command. Among the tanks that were in service, there were practically no modern heavy tanks. The entire fleet of cars of this class consisted of several dozen Mk.VIII tanks, made back in 1919 — 1920. Mk.VIII - the final of the development of the British "diamond tanks" of the First World War Already by the 1930 years these sedentary and poorly protected tanks (booking protected only from light rifle weapons) hopelessly outdated. There was no question of using them as combat vehicles. The maximum that they were capable of is to become an educational tool. It should be noted that no work on the creation of the replacement of these machines was carried out in connection with the meager funding of the American armed forces during the interwar period.

With the beginning of World War II and the success of the German tank forces on the battlefield, the interest of the US military to tanks increased significantly. The US military decided to first of all upgrade its pre-war medium tank - М2А1. The main armament - the 37 mm gun - was replaced by an 75 caliber mm gun. This machine has become known under the designation M3 Lee Grant. In September, 1939 revived the heavy tank program. By order of 22.05.1940, they formulated the initial concept for the new heavy tank. For the most part, she repeated the concept of the 1930-ies - a multi-tower tank with a relatively modest reservation. 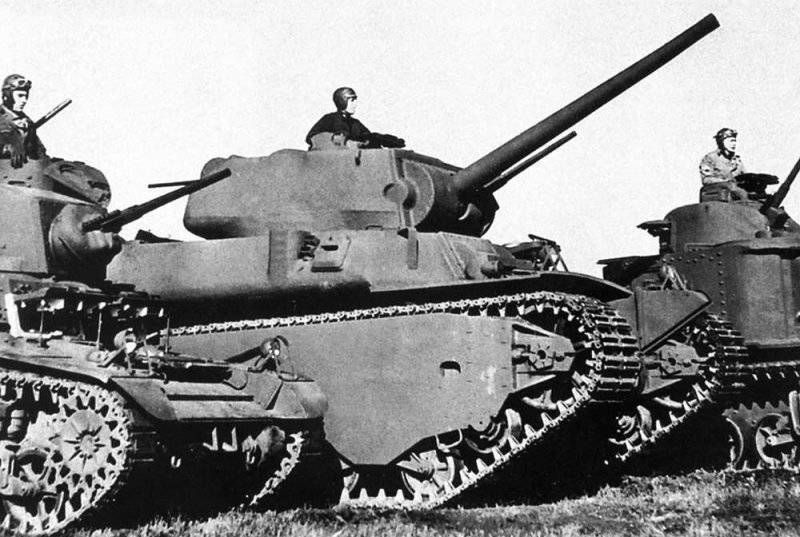 Given the tactical and technical requirements, the mass of the new tank should be from 50 to 80 tons. Later, the US military decided that the specified range of masses was too large and clarified the requirements according to which the mass of the car should be within 50 tons. Estimated booking - sheets of thickness 75 mm and more.

The heavy tank was thought to be a heavy breakthrough machine. The start date for the development of the new heavy tank is 11, July 1939. It was on this day that the project was given the name “Heavy Tank T1” (heavy tank T1). Development was carried out by Baldwin Locomotive Works.

The crew consisted of a 6 man: a commander, a gunner, a loader, a driver and an assistant driver who actually performed the duties of a machine gunner. The workplace of the tank commander was located to the left of the gun, for it was provided for commander's turret. To enter the exit of the crew members a total of 3 hatch was provided. 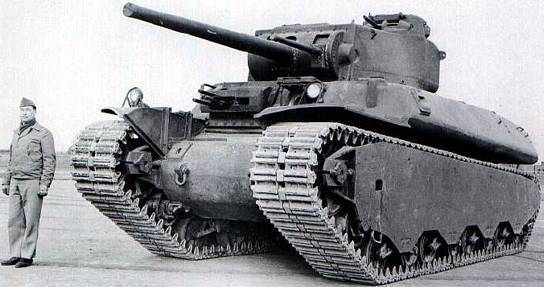 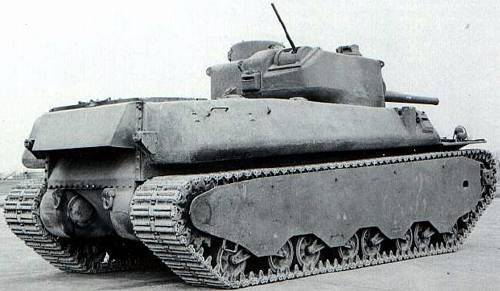 Pilot T1E2 as it arrived at the Aberdeen Proving Ground 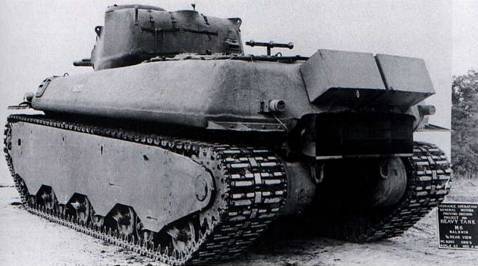 Heavy tank tower cast. To balance the system of twin guns, the back of the tower was extended. A commander's turret and a bracket for installing an anti-aircraft machine gun were mounted on the turret.

As an engine for the American heavy tank, the Wright G-200 engine was chosen. At 2300 rpm, the engine developed the power of the 960 HP.

After a lot of experiments, the designers chose the Hydromatic transmission as the transmission.

In the undercarriage of heavy tanks used 8 small road wheels (interlocked in pairs) on board. The suspension had vertical buffer springs. The undercarriage was protected by special armored screens. The upper parts of the hull sides were located above the tracks.

As the main armament served as a modernized anti-aircraft gun Т9 caliber 75 mm. As an additional weapon, the M5EXNNXX 1 mm gun was paired with it. The commander of the tank firing a machine gun. The assistant driver in charge had two machine guns at once. In the body of the tank were made three small loopholes for firing from personal weapons. 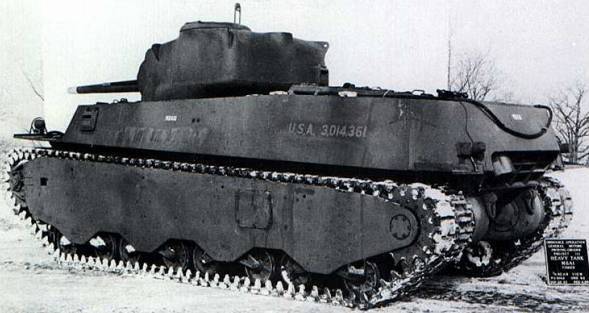 Production pilot heavy tank M6А1 at the site of General Motors, 22 January 1943. Outwardly, there are almost no differences from the serial M6, with the exception of the welded body

In the summer of 1940, the company-developer received an order for the manufacture of a test batch in 50 tanks.

The first modification of the heavy tank was T1-1. From the prototype, it differed gas-electric transmission company General Electric. In April, 1941, the next version of the machine - T1-2. This heavy tank was equipped with a T16001 double-disc clutch. However, during the tests it found a huge number of flaws. Transmission and brakes, as well as the mechanism of rotation of the tower worked very. During the tests, the power steering system failed. Despite the identified shortcomings, the car with some improvements and additions launched in production. Probably, this decision was influenced by the day of testing - 08.12.1941. The tests were carried out the next day after the attack on Pearl Harbor, the US military simply was afraid to enter the war, not having a heavy tank armed with. The serial car should have received the following improvements: the number of machine guns from the shooter was reduced to one; the place of the driver was equipped with two periscopes; another periscope equipped the workplace shooter; the commander's turret was dismantled, replacing it with a two-wing hatch. In addition, a large number of less significant changes were made. However, for the launch of mass production of American heavy tank was too "raw." In this regard, in the course of production, modifications were made, which caused the appearance of a number of modifications:
The T1 tank had a molded hull, equipped with a Wright G-200 engine and Hydromatic transmission;
The T1E1 tank also had a cast hull and a Wright G-200 engine, but was equipped with an GE electric transmission;
The T1E2 tank had a Twin Disc torque converter;
T1E3 tank - in this modification the cast hull was replaced by a welded one using a number of cast parts. 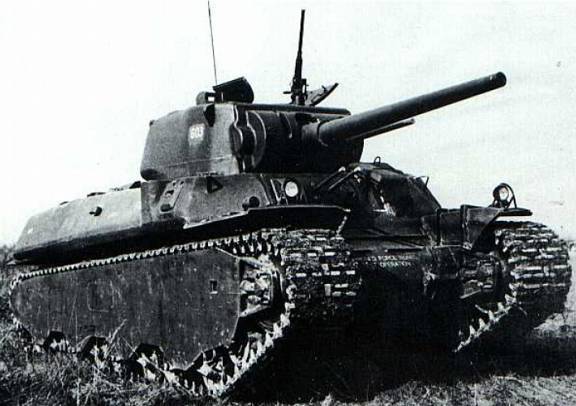 26 May 1942, the first American heavy tank received the serial designation M6, and the modification T1EX3 - M6A1.

The initial order for the M6 tanks was 1084 vehicles. Soon it was reduced to 115 units, and in 1944, production was stopped altogether. Tankmen simply didn’t need these cars, due to excessive weight, they couldn’t fit them into their tactical schemes. For the same reason, work on the next modification - T1-4 suspended. True, the US Army Supply Service increased the order to 230 tanks, outlining the supply of 115 vehicles to the UK.

However, further the American heavy tank M6 met with resistance in the army, more precisely, from the commander of the armored forces D. Divers, and the production of machines was sharply reduced. Over the entire production period (November 1942 - February 1944 of the year), 40 tanks of this series were produced, of which: М6 - 8 units; М6А1 - 12 units; M62 - 20 units. In addition to these machines have released another 3 tank series M6.

In July, the 1944 year, when heavy tanks were again required for the European theater of operations, one М6А2 was modified by mounting the turret with an 105 caliber mm gun. It was planned to deliver 15 М6А2 with such tools to Europe, but the idea was not accepted. The tank modified in this way received the designation M16A2EXNNUMX.

The M6 heavy tanks were generally prototypes. Limited mobility - the cause of poor combat qualities. Military tests that took place in the 1944 — 1945 years revealed the imperfection of the constructive solution, the main idea of ​​which was to use the 120 mm caliber cannon to fight tanks. According to the test results, the vehicles were not accepted for service and did not take part in the hostilities.

Heavy tanks M6 used for training purposes. In addition, the machines of this series were used as experimental equipment for testing various units and assemblies. In July 1944, on one М6А2, a new turret with a 105 mm caliber gun was installed (according to other data, the caliber was 120 mm). The 15 heavy tank series was planned to be redone and shipped to Europe, but these plans were not to be realized.

Ctrl Enter
Noticed oshЫbku Highlight text and press. Ctrl + Enter
We are
From French "diamonds" to French "Christie"Fast and protected: modern armored cars of foreign countries
35 comments
Information
Dear reader, to leave comments on the publication, you must to register.