Sergey Rogov: “The sword of Damocles hangs over our science” 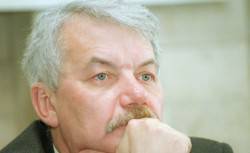 Like all academicians, Sergei Mikhailovich did not go on vacation in the summer. It was necessary to prepare a thorough and convincing research that would show the role of the Russian Academy of Sciences in modern Russia, and would save both the authorities and the scientists themselves from the many illusions that prevail in society.


The work “New shock therapy and“ Reform of the Russian Academy of Sciences ”prepared jointly with colleagues at the institute. The realities of Russian science ”he presented at the General Meeting of the Russian Academy of Sciences. In the monograph, the role and place of science in our life were presented integrally and volumetrically, it was told about the fate of scientific research in Russia, as well as about finding a way out of the impasse. The fact that we were in it, it seems, no one has any doubts.

Have you heard the opinion of the famous scientist "at the very top"? At first it seemed to me that this would happen, but the study of Academician Rogov, as well as other recommendations coming from the Russian Academy of Sciences, was not only not heeded, but did not even get to know them!

I asked Sergei Mikhailovich at the meeting about the reaction that followed after sending his work to all the “instances”. He answered shortly:

- Silence. It is unprofitable for them to discuss this ...

It is a pity, because it is impossible to make decisions about the fate of science and the Russian Academy of Sciences, not knowing and not understanding what is happening with them and around them.

- Your overall assessment of the situation - what is it?

- The Russian Academy of Sciences in the past century has repeatedly faced enormous difficulties, but it held out and provided a foundation for our future. Despite beggarly financing, the RAS is the most effective sector of Russian science in terms of the number of scientific publications, not to mention their quality. But today we face the real threat of the final destruction of basic science, as happened with applied science in Russia in 1990 ...

It is planned to create a super-bureaucratic model of management of Russian fundamental science and its financing. Officials will have the unlimited right to establish, reorganize and liquidate scientific organizations and appoint their leaders. The age-old tradition of the democratic self-government of the scientific community will be destroyed.

It is planned to change the role of the scientific institutions themselves, turning them into a kind of “supporting platform” for temporary scientific groups. The key object of funding in the new model will be the “scientific laboratory of groups of scientists” with a significant reduction in the share (less than 50 percent) of the estimated funding of organizations. The official pseudo-reform will lead to the elimination of the existing scientific infrastructure and the destruction of existing scientific schools. There will be a massive reduction of scientific organizations and the dismissal of scientists. The communities of scientists by branches of the RAS department will also be destroyed, which will lead to the fragmentation of the scientific community.

- On this account, a masterpiece of bureaucratic thinking is proposed, which, it seems, formed the basis of the draft law on the reform of the RAS.

- In the past two decades, the number of officials in the country has increased several times, many new organizations, firms and foundations have appeared. Even graduates with higher education diplomas have become ten times more than it was in the entire Soviet Union. The bureaucratic apparatus grew rapidly. Has this All-Russian process touched the Academy of Sciences?

- Throughout this time, there has been a process of de-modernization and de-intellectualization of Russia. The USSR in terms of domestic spending on R & D, which reached about 5% of GDP, was among the world leaders. The country had a powerful system of basic and applied research, in which almost 1,5 million researchers worked - about one quarter of all scientists in the world. Industry science was represented by approximately 5 by thousands of institutes and design bureaus, testing stations and was supervised by the relevant ministries. The concentration of enormous resources has made it possible to achieve a technological breakthrough in a number of branches of the military-industrial complex, including the nuclear and aerospace industries, instrument-making. Although during the Cold War, the scientific complex had a clear military-industrial bias (3 / 4 R & D expenditures were directly or indirectly defensive), and some areas of research were victims of ideological dogma, fundamental science and many branches of applied science in the Soviet Union world level.

The state of Russian science and education, starting with 1990-s and up to today, continue to be crisis. As a result of the “shock therapy”, most of the sectoral institutions, which were the main link between science and production and the main element of the innovation process in the country, ceased to exist. Applied science was destroyed when branch ministries disappeared.

- Comparison of what died and what was born - the unrestrained growth in the number of banks and other various financial institutions, offices, stock exchanges, buy-sell complexes, etc. - speaks for itself ...

- Disappear mainly engineering professions, technical specialties and all that is necessary for modern production and science. Employment in the science sector in Russia from 1992-2011 decreased in 2,5 times, and the number of researchers - almost 3 times. And the process of reduction continues. Today, many researchers are deprived of the expected career prospects and do not see a clear path of their professional and career growth. This causes the outflow of scientists abroad. According to the estimates of the Institute of Economics of the Russian Academy of Sciences, by the middle of the 2000s, more than 800 thousands of researchers had emigrated. Every year the country leaves up to 15% of university graduates. In addition to these traditional forms of “brain drain,” new ones have appeared, such as the “leak of ideas.” Many scientists living in Russia work according to scientific programs carried out in the interests of foreign customers. Thus, they “emigrate” without going abroad, and the results of their research belong to a foreign employer.

Russia fell back to 4-place in the world (after the United States, China and Japan) in the number of researchers.

The current situation poses a threat to Russia's national security. If you do not change the approach to science, then the primitive structure of the economy will be preserved, the country's scientific and technological gap will increase, the international competitiveness of domestic products will be further reduced and the status of the raw material appendage of world leaders will be humiliating for Russia.

Russia's share in the global export of high-tech products is 0,2%, including aerospace products - 0,6%, chemical products - 0,6 pharmaceutical products - 0,4%, scientific instruments - 0,3%, electronics - 0,1%, computers - 0,0%. Talking about the “energy superpower” is self-deception. It’s time to understand that in quantitative terms we will never be equal to the United States, China, the European Union and India ...

- Well, what about Skolkovo, Rosnano, Kurchatov Center, and other trendy entities that are proclaimed as “leaders of the innovative path of development of Russia” and who consume the lion's share of funds allocated to science?

- The idea that the Russian state spends too much on science (0,82% of GDP) does not correspond to reality. According to this indicator, Russia is far ahead of the United States, Germany, Finland, South Korea, Sweden and several others. The Russian Federation today spends on fundamental research a significantly smaller share of GDP than countries — the leaders of scientific and technological progress. We are lagging behind Switzerland by 4 times by this indicator, by France and USA by 3 times, by Japan by 4 times ...

- And yet: what about Skolkovo and the rest?

- In recent years, state budget spending on innovation has really increased. But they were mainly financed by Skolkovo, Rosnano, the Kurchatov Institute, megaprojects, industry projects, university science, and so on. There have been repeated attempts to create a "parallel Academy", that is, a massive allocation of budgetary funds for structures that enjoy financial and tax advantages from the state. However, these costs were unproductive and almost did not bring any visible results.