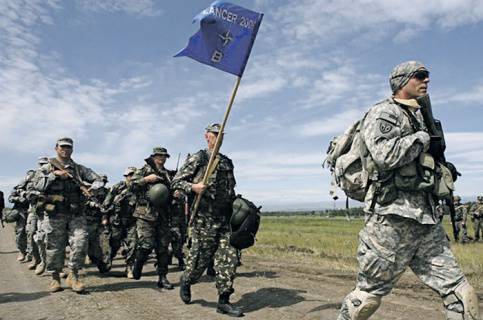 The units of the Georgian armed forces will be part of the NATO Rapid Reaction Force since 2015, the country's defense minister Irakli Alasania told 16 on September. According to him, the decision of the North Atlantic Alliance was made three weeks ago, and this is "the highest recognition of the Georgian armed forces." From the point of view of the chief editor of the National Defense magazine Igor Korotchenko, a closer relationship between Georgia and NATO in the form of its participation in the bloc’s rapid reaction forces may have a rather negative effect on the entire region. “First, Georgia is an aggressor country, which still does not recognize such responsibility. Secondly, this may lead to Georgia becoming a springboard for US actions in the region, ”Igor REGotum quoted Igor Korotchenko as saying.

As is known, the decision to deploy the NATO Rapid Reaction Force was taken in Brussels at a meeting of the 28 defense ministers of the countries - members of the alliance, held on February 21 – 22. Their creation was provided for in the “Chicago defense package”, adopted last May at the NATO summit, and involving two initiatives: “smart defense” and “united forces”. The central element of the second initiative of the Chicago Defense Package, called the "united forces", was precisely the creation of the NATO Rapid Reaction Force, which will be in constant readiness.

According to the secretary general of the alliance Anders Fogh Rasmussen, these forces, formed from components of the ground forces, air force and navy of the countries - members of the block, will receive priority funding, they will constantly train, become "a school of cooperation and at the same time a tool for rapid response." As you can see, the Rapid Reaction Force will be the most important component of the Alliance OAS, which are created on the basis of Art. 3 North Atlantic Treaty. This article defines that “in the interests of more effectively implementing the objectives of this Treaty, the Contracting Parties, separately and jointly ... will maintain and increase their individual and collective capacity to fight an armed attack”. Thus, in order for units of the Georgian Armed Forces to become part of the NATO Rapid Reaction Force since 2015, the country must be admitted to the alliance. Otherwise, there will be a violation of the North Atlantic Treaty.

Naturally, Georgia will become or not a member of NATO, the leadership of the alliance will decide on the basis of this Treaty. For example, at the end of May, Colombian President Juan Manuel Santos announced: in June, the country's Defense Ministry and NATO will sign an agreement on the exchange of classified information, which will allow "to begin the process of rapprochement and cooperation with a further goal to join Colombia into the alliance." Colombian neighbors in Latin America reacted very negatively to its NATO ambitions. However, in NATO, these concerns were quickly removed. As a source in the alliance explained to the Kommersant newspaper, talk of Colombia’s potential membership is meaningless, since the 10 article of the North Atlantic Treaty, signed in Washington in 1949, states: “any European state capable of contributing to the security of the region can join NATO ". The alliance explains: to begin with, at least theoretical talk about the expansion of NATO beyond Europe and North America, it is necessary to change the basic document - the Washington Treaty of 1949. However, some changes to this contract have already been made. As you know, NATO in 1952 disregarded the 10 article of the Treaty and accepted Turkey, which is located in Asia, into the alliance. In this regard, an addendum was made to Article 6 of the Treaty, clearly stating this fact: “For the purpose of Article 5, it is considered that an armed attack on one or more Contracting Parties includes an armed attack: on the territory of any of the Contracting Parties in Europe or North America, the territory of Turkey ... (highlighted the addition made. - Auth.). "

In addition, Turkey’s admission to NATO led to a violation of another international legal instrument. The fact is that military-political alliances operate on the basis of the UN Charter, in which Article 51 speaks of the right of each state to collective self-defense. In particular, in the North Atlantic Treaty, Article 5 contains a reference to this provision of the UN Charter. How this right every state can realize is determined by its article 52. It provides for the possibility of existence for these purposes only “regional agreements or bodies for resolving such issues relating to the maintenance of international peace and security that are suitable for regional actions ...”, that is, the possibility of creating a global union is excluded. Since the concept of "region" can not cover the entire globe or most of its continents. Therefore, in the North Atlantic Treaty, the region includes Europe, the North Atlantic Ocean and North America, and article 10 determines that only European states can be members of the alliance in the future, and thus the requirement of Article 52 of the UN Charter was met.

Today, the same picture is observed with the possible accession of Georgia to NATO, as in the atlas “All countries and territories of the world. The New CIA Geographical Reference Book ”(The World Factboor 2007, USA) states that Georgia is geographically located in South-West Asia. It seems that the current ideologues of Georgia’s accession to the alliance adhere to the Soviet interpretation of the geographical border between Asia and Europe, when it was considered to be considered in the Transcaucasus to coincide with the Soviet-Turkish border. Thus, Georgia’s accession to NATO would also mean a violation of Article 10 of the North Atlantic Treaty, and most importantly, the UN Charter. The constant assertion in NATO circles that the expansion of NATO automatically means the expansion of a democratic space in Europe has already become a dogma. Meanwhile, one of the principles of a democratic political regime states that "everything is permitted, except as prohibited by law." The question arises: how can we expand the democratic space in Europe, violating international legal acts?

It seems that the desire to make a fighter for democracy from NATO also explains the nature of the requirements for a future member of the alliance. In particular, 26 June at a press conference during his visit to Tbilisi, Rasmussen noted that “the complete Euro-Atlantic integration of Georgia is our common goal. If Georgia satisfies the necessary requirements, it will definitely become a member of NATO. ” What are these requirements, the Secretary General of the Alliance told in Tbilisi back in 2011 year. First of all, according to Rasmussen, it is necessary to improve the electoral reform. Secondly, the “rule of law” must be strengthened. And thirdly, as a result, it is necessary “to continue judicial reform and connect the civil sector to these processes”. How successful Georgia has been in carrying out these reforms under the leadership of President Saakashvili and NATO patronage, Prime Minister Bidzina Ivanishvili said in a recent interview with the Israeli newspaper Sof Shavua: He is talented, he deceived the whole world ... He appeared as a democrat. Everyone supported him, but then they guessed that he was building an authoritarian regime ... "

Apparently, it is for this reason that the NATO Secretary General did not speak in Tbilisi about the most important requirement for any candidate member of the alliance - the absence of unresolved territorial problems. This was not mentioned either in the 2011 year or later. That's when at the Bucharest NATO summit in the spring of 2008, Georgia was promised to be admitted to the alliance, then there, apparently, it was a question of the need to solve problems with Abkhazia and South Ossetia. As a result, this conversation pushed Mikhail Saakashvili, as an ambitious and authoritarian leader, to force South Ossetia to return to the Georgian jurisdiction in August 2008. Doug Bandow, former Special Assistant to President Ronald Reagan, is now a researcher at the American Conservative Alliance for Defense Policy Analytical Center, in the article “Electoral shock in Georgia: Tbilisi, time to get rid of NATO aspirations” published in Forbes in October 2012. , he wrote: “The biggest failure of Saakashvili’s foreign policy was the beginning of the war with Russia in 2008, in which he was defeated. Just as Georgia left the Soviet Union in its time, Abkhazia and South Ossetia separated from the Georgian state, and not without the help of Moscow. However, these republics had the same right to independence as Georgia, when it was separated from the USSR. Alas, Saakashvili believed that the right to self-determination extended only to his people, and invaded South Ossetia, despite the presence of Russian troops there (the Russian peacekeeping contingent. - Auth.). ”

It is possible that they are waiting in the North Atlantic alliance when the Georgian leadership finally realizes that the people of Abkhazia and South Ossetia do not want to live as part of Georgia and even NATO will not force them to do so. So, sooner or later, Georgia will have to recognize the state sovereignty of these republics. That is, the alliance seems to have decided to act on the principle of “resolve itself” and only then decide on the issue of Georgia’s joining the bloc. Moreover, the experience of Kosovo, which gained independence from Serbia thanks to NATO, is in full view. In the meantime, NATO officials are postponing this process, putting forward various demands on Georgia, the fulfillment of which takes years. Otherwise, what happened on April 12 at The National Interest in the article “Dangerous Drift of Georgia Towards NATO”, may happen what Doug Bandou wrote about: “It is assumed that NATO should make America more secure. But the advance of NATO to the borders of Georgia will increase the likelihood of war. In the case of the beginning of hostilities of Tbilisi with Abkhazia and South Ossetia, Moscow could be drawn into them, and this will lead to a confrontation between NATO and Russia. As a result, war can begin, which the West has been able to avoid throughout the Cold War. Of course, it will be mostly the Americans who will fight - and this conflict has a dangerous chance of becoming a nuclear one, especially given the relatively weak non-nuclear forces of Russia. ”

And it’s not at all true that this scenario of a venerable specialist in international relations is fiction. Here is what former US Secretary of State Condoleezza Rice writes in her book “No Honor Above,” about the first meeting of the National Security Council after the start of the August 2008 war. “The meeting was rather stormy, there were many hot statements about Russia. At some point, Steve Hadley (National Security Advisor to the White House) intervened, which he rarely does. This happened in the midst of tumultuous talk about what the US could have threatened. “I want to ask a question,” he said in his usual restrained manner. “Are we ready to go to war with Russia because of Georgia?” There was silence in the room, we calmed down and started a more productive conversation about measures that could be taken, ”recalls Condoleezza Rice. I would like to hope that the correct conclusions were drawn from the situation described in the United States, the main ideologue of Georgia’s joining the alliance during the times of President George W. Bush. Although after it, nothing actually changed. This is confirmed by another NATO candy for Georgia in the form of a promise to include the units of the Georgian armed forces in the NATO Rapid Reaction Force in 2015.

Ctrl Enter
Noticed oshЫbku Highlight text and press. Ctrl + Enter
We are
Bridgehead for US actions in the region: experts on the inclusion of Georgia in the NATO Rapid Reaction ForceNikolay Silaev, Andrei Sushentsov: Georgia after the elections and prospects for Russian-Georgian relations
Military Reviewin Yandex News
Military Reviewin Google News
116 comments
Information
Dear reader, to leave comments on the publication, you must to register.