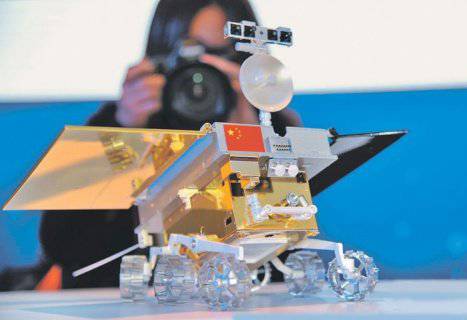 China develops its own technology based on growing exports.

Moscow and Beijing demonstrate opposite approaches to financing innovation. Russian officials support isolated projects like Skolkovo, while China is increasing its investment in its own research based on growing exports of high-tech products. In terms of expenditure on research and development in the past year, China confidently ranks third in the world after the United States and united Europe. Such news reported yesterday by the Chinese statistical services. At the same time, Beijing confirmed plans to launch its own lunar rover as early as December 2013.

China does not want to be just an assembly shop anymore and is rapidly increasing its investments in its own development in order to establish a full cycle of export production using Chinese technologies. As the official press organ of the People's Republic of China, “Renmin jibao,” reported yesterday, “today China ranks third in the world in terms of total investment in research and development, gradually reducing the gap with developed countries and advancing in strengthening its status as a great power in science and technology ".

The victorious pathos is confirmed by the official statistics of China, as well as by the calculations of the Ministry of Finance and the Ministry of Science and Technology of the PRC: in 2012, the total investment in research and development throughout China amounted to more than a trillion yuan, at the current exchange rate it is about $ 168 billion. In 2012, China invested in innovation 18,5% more than in 2011. According to the Global R&D Report, China accounted for 2012% of global research and development (R&D) spending in 14,2. Indeed, in terms of this indicator, China is second only to the United States, which accounts for 31,1%, and to united Europe, with a share of 24,1%. At the same time, China has overtaken Japan, whose share is 11,2%, and Russia, with a very modest global share of 1,9%.

It seems that China’s investment in its own technologies is already bearing fruit. Neighboring rich countries complain about the growing flight of their scientists to China. This, in particular, is spoken by Japanese officials, where local scientists, it would seem, are in ideal conditions. One of the reasons for such a “brain drain” is a wider range of opportunities for scientists to implement their own projects - right up to the final export product.

A symbolic example of the success of China in the field of technology is the project of the Chinese lunar rover, which is scheduled to launch this December. We are talking about the launch of the first Chinese lunar mobile module, which is part of the third Chinese lunar sounding satellite, Chang'e-3. As reported by the Xinhua News Agency, during this mission, a space telescope based on the Moon will be installed for the first time, the lunar rover will be equipped with an 360-degree panoramic camera, an infrared spectrometer and an X-ray spectrometer for the first time.

China’s desire to establish a full cycle of development and production of high-tech export products domestically could serve as an example to follow. Against this background, the Russian approach to innovation looks pretty flawed. Attempts to pinpoint investments in innovations by creating such science cities of the future as, for example, Skolkovo, so far have not yielded any noticeable effect. At least they do not lead to technology breakthroughs and export growth. Judging by the Chinese experience, the effect of enclaves like Skolkovo will not be until they are built into the full chain of high-tech export products.

In the list of exporters of high-tech products, Russia occupies a very unenviable place in the world. For example, according to the calculations of foreign researchers, the United States and the European Union export aerospace products to 89 and 88 billion dollars a year, respectively. Russian aerospace exports only slightly exceed 1 billion dollars a year. In other words, the United States and the EU - each of the leaders - export aerospace products almost one hundred times more than Russia. But we are talking about the most modern industry in our country.

Approximately the same ratio of Russian exports with other countries in the field of electronics, pharmaceuticals and computer equipment.

Interviewed experts find several reasons for Russia's lagging in the innovation sector. These are mistakes of the state approach to innovation, an unfavorable business environment and underdeveloped competition. “The effect of scale is still impossible to ignore. When the volume and variety of its own production exceeds a certain level, its complexity inevitably begins to grow, and technology - to improve. Obviously, in a country with the second-largest GDP in the world, which is the “world assembly workshop,” this critical level has long been passed, ”says Allianz Investments analyst Ariel Black. “The large volume of the market in which Chinese manufacturers work is the main competitive advantage of Chinese innovators.” The volume of the Russian market, of course, is incomparable with the Chinese, so successful commercialization of research by Russian scientists will be difficult without focusing from the very beginning not only on the domestic market, the expert continues. “However, the problem of low returns on investment in research and development is wider than the mere inclusion or non-inclusion of export products in the production chain. The main trouble is that the economic realities, the conditions in which the largest companies exist and compete, do not encourage them to introduce new technologies, ”adds Cherny.

The first vice-president of the Russian club of financial directors, Tamara Kasyanova, recalls that a number of major international companies that previously used China as an assembly shop decided to return production to their homeland. In such circumstances, China is forced to change its approach to the import of technology. “But today it is difficult to talk about completely Chinese developments. Basically, they take as a basis the models of one or another product of foreign manufacturers and, after completion, produce a new Chinese product, ”notes Kasyanova. “Our scientists would work with great joy for the good of the country, but the main problem is the lack of necessary conditions. The salary of researchers remains low, and at the expense of the enthusiasm alone you cannot feed the family. Often laboratories are not properly equipped. To the request to replace the equipment in most cases the answer is: “There are no funds in the budget”. What kind of science development can we talk about if conditions are not created? - asks Kasyanov. “But on the other hand, the country's leadership is spending huge amounts of money on innovative developments, and not everyone understands what, for example, the same“ nanotechnologies ”are. Yes, and the corruption component in this process is clearly not a nanoscale. ”

“Russian science, if not to take the defensive direction, has always been focused on basic research. This was her problem in the 90-s, when the scientific personnel potential was largely extinct or went to foreign research centers. Applied science, in fact, needs to be created anew, and without industrial application and the demand for its development, the situation will, at best, be preserved at the current level, ”said Alexander Mironov, director of the audit department of Ural Union. At the same time, the high-tech manufacturing industry, which we should have had to stimulate industry science, is not itself in the best economic state.

Exports of countries by leading industries, in billions of dollars *

* 2011 data for the year Source: US and Canadian Institute, Main Science and Technology Indicators Database.