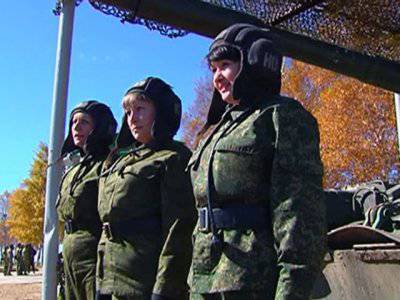 In the Amur region began to prepare the first in the Russian army of women-tankers. Within half a year, two crews will master combat vehicles. And next year they will take part in a tank biathlon, which is decided to hold regularly.

The appeal to these novice tankers is not yet known. But this is no longer an excursion. Three friends Natalya, Olga and Elena - crew tank T-72. For two weeks now they have been studying the device of this military machine every day, learning to hit various targets on simulators, and using a headset.

“The girls are very emotional when they hit the target, clap their hands, rejoice, they like it, they want to do more and more, and they want to show it all at the training ground,” said platoon commander Peter Dvoretsky.

At the tankodrome, the tasks are the simplest: to get into a tank, start a formidable car and start off. With this task, Olga Douzhenko, the future driver-mechanic, copes perfectly well. There is no fear of an armored vehicle. The women's crews in the motorized rifle brigade of the Amursky Arms Association were formed after the Ministry of Defense decided: tank tank biathlon competitions will now be held annually and both men and women will take part in it.

"I made a decision, I selected two crews to have a spirit of competition between them. Of course, women were selected voluntarily. Everyone expressed a desire, they want to serve. While in my practice, there were no women crew members, if the experiment succeeds, we will appoint women to the position of tank commanders, driver, "- says. Vasily Mushlanov, commander of a motorized rifle brigade of the Supreme Military District.

In the experimental T-72 crews, only women are military personnel. Natalya Sulikova has given the army more than one year, in her part she is in charge of the warehouse. In the tank she was immediately recognized as the main one. She is the crew commander, responsible for everyone.

“We have been serving for a long time, I want the spirit of the competition, in the brigade we have this structure. We want to try it, there were a lot of people willing, we were chosen,” said Natalia.

Male colleagues to the training of experimental crews are serious and responsible. Orders are not used to discuss here. But please help.

Now six future tankers are trained in driving in their unit. After the exams, the best crew will undergo fire training in a tank training regiment in the Khabarovsk Territory. Then the most interesting will begin - the competition for the right to be the best tank crew in the country.

Ctrl Enter
Noticed oshЫbku Highlight text and press. Ctrl + Enter
We are
T-72B3 was declassified at the tank biathlon in Alabino
Military Reviewin Yandex News
Military Reviewin Google News
198 comments
Information
Dear reader, to leave comments on the publication, you must to register.