They were frightened by Putin’s surcharges. Latvian Defense Minister saw a threat in Russian allowances for veterans of the Great Patriotic War 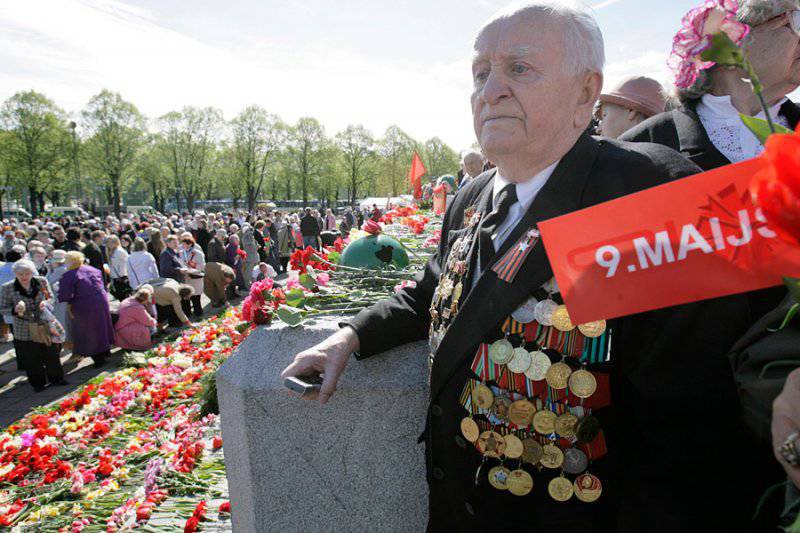 The Minister of Defense of Latvia accused the Kremlin of trying to "split the Latvian society" and even draw Latvia into the Eurasian Union. So he responded to the draft Putin decree on benefits for veterans of the Great Patriotic War living in the Baltic States. The leaders of the Latvian opposition in an interview with the newspaper VIEW noticed that the minister had decided to show another scare story on the topic “Russians are coming - Latvian, do not give up.”


Latvian Defense Minister Artis Pabriks accused Moscow of trying to split Latvian society. The reason was the draft decree of the President of Russia on benefits to veterans of the Great Patriotic War living in the Baltic countries.

According to Pabriks, the decree is aimed at splitting Latvian society. “This is a clever diplomatic move, and with this step the President of Russia shows the attractiveness of his policies for citizens of neighboring countries,” he said.

According to the minister, this is due to Russia's intention to create a Eurasian Union, uniting the former Soviet republics. “At the same time, this step raises concerns about an even greater split of society in Latvia,” said the Latvian politician, noting that this is not a financial, but a political and symbolic step.

According to Postimees, Pabriks pointed out that in Latvia, too, we should think about steps that would unite the society, and not split it even more.

“For example, the question of social guarantees to people who once served in the Soviet army but refused Russian military pensions has not yet been resolved. It is necessary to think about the corresponding symbolic steps from the Latvian side in order to convince people of the attractiveness of Latvian politics and make them patriots of our country, ”he said.

The draft law is posted on the website of disclosure of information on the preparation of federal regulatory legal acts and the results of their public discussion. The discussion of the project ends on October 5.

Now additional one-time financial assistance from Russia is paid from time to time to veterans - Russian citizens living in the Baltic republics. The last time this happened was in 2010 on the occasion of the 65 anniversary of the Victory in the Great Patriotic War.

According to the document, participants and disabled veterans of the Great Patriotic War, as well as their widows, blockade of Leningrad, former prisoners of concentration camps, prisons and ghettos and representatives of some other categories will be eligible for life-long monthly material support. Lifetime monthly material support will be from 500 to 1000 rubles per month.

As stated in the explanatory note, the decree was caused by the infringement of the rights of veterans in the Baltic countries: “Veterans of the Great Patriotic War living in Latvia, Lithuania and Estonia are deprived of their rights in many spheres of life. By the will of the political elite of the focal countries, from defenders of the Motherland, they suddenly turned into “invaders”, often subject to prosecution. This is taking place against the backdrop of the line realized by Vilnius, Riga and Tallinn for the glorification of former members of the SS forces. ”

One of the leaders of the opposition party “Harmony Center” Janis Urbanovich considers Pabriks’s attack as a manifestation of overt populism.

“I think that this is not the first statement of such a Russophobic persuasion, it is connected only with his desire to run for the European Parliament. The Russians and the good initiatives of the Russian president, as always, have nothing to do with it, he just decided to show another horror story on the topic “Russians are coming - Latvian, do not give up,” as humorists here joke, ”said Urbanovich to the newspaper VZGLYAD.

According to him, the Latvian treasury does not indulge its veterans. “All our pensioners, except for new retired officials and retired politicians, are in distress. They come out with petitions and calls for demonstrations. There is financial support for the repressed, but I don’t know if there is something similar for the participants of the Great Patriotic War, ”he added.

“I don’t know what happened to him lately, he gives out pearls one by one. Today, he has already been compared with Zhirinovsky, and it seems that he is really on this path. As for the veterans of the Great Patriotic War, their situation is very difficult, they do not receive any benefits, ”the deputy explained.

According to Tsilevich, there are certain benefits for politically repressed and “members of the national liberation movement,” whose veterans receive benefits.

“Neither the Red Army veterans, nor the former SS legionnaires fall into this group. In general, this is an extremely difficult and painful question, until we managed to get things moving off the ground, despite the initiatives of the President of Latvia, who offered to respect and take care of all veterans, regardless of who fought on which side, ”said Tsilevich.

Tsilevich blames Pabriks for double standards. “As for the split of society, I don’t know in which society the distinguished Minister of Defense lives. The society has long been split, and this was done exclusively by the hands of Pabriks and his associates, ”he believes.

We add that on September 7 a regular rally of pensioners was held in Riga. About a thousand people reminded the authorities of the continuing decline in their standard of living. The rally participants adopted a resolution demanding to ensure the most fair indexation of pensions and introduce a system of state medical insurance for pensioners.

Ctrl Enter
Noticed oshЫbku Highlight text and press. Ctrl + Enter
We are
Not all Kievans were afraid of the Poroshenko ban on St. George ribbonThe action “Military service under the contract is your choice!” In Rostov-on-Don: future contract servicemen, exhibitions and “Russian Knights”
Military Reviewin Yandex News
Military Reviewin Google News
73 comments
Information
Dear reader, to leave comments on the publication, you must sign in.