Worthy son of his people 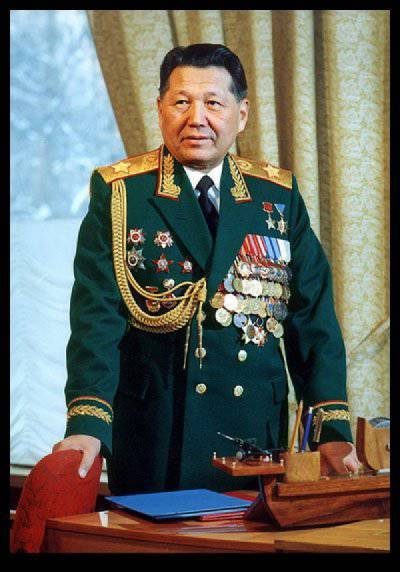 On September 26, a farewell ceremony was held in the Kazakh city of Almaty with the Hero of the Soviet Union, Army General Sagadat Nurmagambetov, who passed away last Tuesday at the 90 year of life.


Sagadat Kozhakhmetovich Nurmagambetov was born on 25 in May of 1924 in the village of Trudovoe, Akmola region, and went through a life path typical of millions of people born at that time in the Soviet Union. In 1942, he was drafted into the Red Army and sent to Turkmenistan at a military school in the city of Kushka. Since April 1943, Sagadat Kozhakhmetovich participated in the liberation of Krasnodar Territory, Ukraine, Moldova, Western Belorussia, and Poland. He commanded a machine-gun platoon, a machine-gun company, a rifle battalion as part of the 5-th Shock Army. 27 February 1945 of the year for the exemplary performance of command missions during the breakthrough of the highly fortified enemy defenses on Polish territory, showing courage and bravery to him was awarded the title Hero of the Soviet Union.

War Major Nurmagambetov ended in Berlin. His battalion participated in the assault on the building of the Reich Chancellery. In April, 45 th in street battles with large groups of faustnik and machine gunners, he destroyed over 450 and captured 1.560 by the Nazis and eliminated nine strong points. In these battles, Major Nurmagambetov was wounded.

When the last volleys of the young, but already with great combat experience, the 22-year-old officer died, they were sent to study at the Military Academy named after M.V. Frunze. After her graduation in 1949, he served in various staff and command positions: a senior officer of the operational management of staff of the Turkestan Military District, commander of motorized rifle regiment, chief of staff of motorized infantry division, the Chief of Staff of the Civil Defense of the Kazakh SSR, deputy commander of the Central Asian Military District, the first deputy Commander of the Southern Group of Forces.

In October 1991, by a decree of the President of the Republic of Kazakhstan, General Nurmagambetov was appointed Chairman of the State Defense Committee, and in May 1992, the Minister of Defense. 23 May 1994, he was awarded the title Halyk Kaharmany (People's Hero) with the award of the Golden Star number 1. In November 1995, S. Nurmagambetov retired with the rank of army general, was an adviser to the president of the republic. After the collapse of the Soviet Union, General Nurmagambetov headed the creation of the armed forces of Kazakhstan, which today play an important role in ensuring regional stability, including within the framework of the Collective Security Treaty Organization.

The President of the Republic of Kazakhstan Nursultan Nazarbayev sent a telegram of condolences to the family and friends of Sagadat Nurmagambetov in connection with his death. It notes that the whole life and activity of Sagadat Kozhakhmetovich is a model of honest and devotional service to his homeland and people.

Ctrl Enter
Noticed oshЫbku Highlight text and press. Ctrl + Enter
We are
Reports from the militia of New Russia for 7 September 2014 of the yearAzerbaijan hosted a military parade
34 comments
Information
Dear reader, to leave comments on the publication, you must to register.