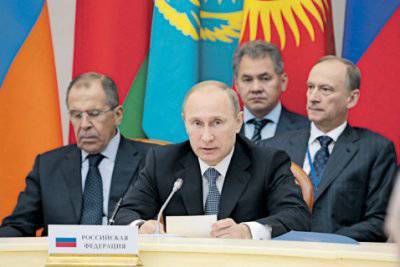 Last Monday, a meeting of the Council of Ministers of Foreign Affairs, the Council of Ministers of Defense and the Committee of Secretaries of the Security Councils of the countries members of the Collective Security Treaty Organization was held in the city of Sochi in the Rodina sanatorium. And this, if someone does not remember, Armenia, Belarus, Kazakhstan, Kyrgyzstan, Russia and Tajikistan. Then in the sanatorium "Rus" - a meeting of the Collective Security Council, which includes the heads of states represented with the CSTO. The main topic of conversation among the leaders of the allied countries was, of course, Afghanistan, the alarming situation that is already taking shape on the southern borders of the Central Asian states and will probably worsen even more after the withdrawal of US and NATO troops from this troubled, torn by international terrorists.


“We are concerned about the development of the situation in Afghanistan in connection with the 2014 factor of the year,” said the head of the Russian Foreign Ministry, Sergey Lavrov. “It is important not to let this situation negatively affect the entire region.” Practically all participants spoke at the meeting of the Collective Security Council on the state of affairs on the border with Afghanistan. But the most emotional was, probably, the speech of the President of Tajikistan Emomali Rahmon. Every year on our northern border occurs before the 280 clashes. They have already killed 160 Tajik border guards. Dushanbe is increasing the border contingent there. There were 4 thousand soldiers and officers in green caps, now 16 thousand, in the near future there will be 20 thousand, but guarantees that peace will be established on Pyanj (along the banks of this river most of the state border between Tajikistan and Afghanistan) order, no. Both professionally trained people and reliable technical and engineering systems for guarding state frontiers and military equipment that can stop not only smugglers, but also combat troops of terrorists who are trying to break into the country are required. The head of Tajikistan has listed in detail the types of weapons that he would like to receive from the allies for these purposes.

Such assistance was promised to him. In the near future, according to Russian President Vladimir Putin, Tajikistan will receive all the weapons it needs. In addition, the 201-I Russian military base will be significantly strengthened (according to the information that was heard on the margins of the meeting, its composition will be increased to the scale of a reinforced motorized rifle division). True, the Russian border guards, as stated by the CSTO Secretary General Nikolai Bordyuzha, will not be in Tajikistan. Although some experts suggested that a decision would be made in Sochi on their direction to the Afghan border.

“There is no need to send Russian border guards to Tajikistan, the border units of Tajikistan are staffed with 100 percent,” said Nikolai Bordyuzha. At the same time, he stressed that "they need to be given the means that will enable them to control the border successfully and effectively enough and prevent possible breakthroughs of bandit formations."

Russian President Vladimir Putin, who assumed the chairmanship of the CSTO next year, said that Russia considers it necessary for the organization of allies to focus on priorities such as strengthening security cooperation mechanisms at the external borders of the CSTO responsibility zone, and improving joint operational and combat training of the bodies. management and the formation of collective security forces and facilities, the preparation of the CSTO Peacekeeping Forces for practical participation in peacekeeping operations, and akzhe strengthen the fight against modern threats and challenges. First of all, with drug trafficking, including from Afghanistan, and international terrorism. To increase the foreign policy coordination of the CSTO member states on key issues of international and regional security, and to develop cooperation between the CSTO and other international organizations.

But the situation after the withdrawal of NATO troops from Afghanistan may not come back only in Tajikistan. Near Kyrgyzstan, where there are strong inter-clan contradictions that can be heated and fueled by religious extremists. And because Russia is taking measures to strengthen security in this country. Sergei Koshelev, head of the Main Directorate of International Military Cooperation of the Ministry of Defense, told reporters in Sochi that the military "are taking preventive steps to form and develop effective security mechanisms in the region."

These measures include increasing the potential of the Kyrgyz Armed Forces, supplying Bishkek with weapons, military and special equipment, which will begin at the end of 2013. Particular attention is given to joint combat training activities to be conducted by Russian and Kyrgyz troops following the example of the Kyrgyz Army battalion exercise held in early June, which involved airplanes and helicopters from the Russian Kant base.

As a result of the meeting of presidents, ministers and secretaries of the security councils of the CSTO countries, it became clear that in the future 2014 will not have easy life for any of the allies.

Ctrl Enter
Noticed oshЫbku Highlight text and press. Ctrl + Enter
We are
Su-30M arrived in Kazakhstan!Alexander Lukashenko wants to give dynamism to the “Union of Seven”
Military Reviewin Yandex News
Military Reviewin Google News
11 comments
Information
Dear reader, to leave comments on the publication, you must sign in.