Experts: "Terminator-2" will be in demand in the world market 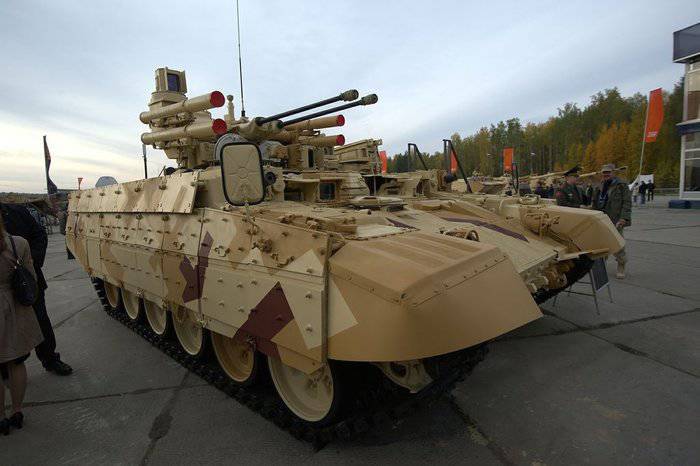 The previous modification of the combat vehicle was previously exhibited, but was not completely understood by foreign partners.

New support combat vehicle modification tanks Terminator-2, the world presentation of which took place at the Russia Arms Expo-2013 exhibition of weapons, military equipment and ammunition, which opened in Nizhny Tagil on Wednesday, has good export prospects, according to Rosoboronexport.

He noted that the previous modification of the combat vehicle had already been exhibited two years ago, but was not completely understood by foreign partners. But after the first deliveries of this equipment took place abroad, the situation changed. “There were deliveries of“ Terminator ”to foreign partners, who showed that the car actually responds to its name as a tank support combat vehicle,” said I.Sevastyanov.

The fighting machine of fire support of tanks is distinguished by a high level of security, firepower and controllability. It is able to fight with tanks, infantry fighting vehicles and other armored targets of the enemy, repel attacks of helicopters and low-flying aircraft, destroy fire installations, as well as hit infantry using grenade launchers and anti-tank complexes.

A distinctive feature of BMPT are all-protection protection, highly effective means of searching and detecting targets, an automated fire control system and multi-channel weapons with a large ammunition load.

In the arsenal of BMPT there are two 30-mm automatic cannons and an 7,62-mm machine gun paired with them, two 30-mm automatic grenade launchers, four supersonic missiles, a large ammunition load to the automatic arms.
On the first day of the RAE-2013 business program, foreign experts voiced the current trends in the arms and ammunition market, reports EAN.

In particular, Christopher Foss said that military vehicles would become more “voracious”, they would require more power. In general, military equipment should be all-weather, and manufacturers will be forced to move to the manufacture of hybrid units. Reliability and maintenance costs of equipment become more and more important factors. New active market participants, such as China, Turkey and other countries, set the tone.

After 90-s, the defense industry was left without personnel and retained the old machine park. From here, according to Dmitry Rogozin, and all the problems of the industry that will be solved in the next one or two years.

Ctrl Enter
Noticed oshЫbku Highlight text and press. Ctrl + Enter
We are
In the center of Moscow a nest of “aliens” appeared: the installation with the eggs of the “fifth column” was exhibited in Novopushkinsky Square and at the editorial office of Echo of Moscow on the NewNew combat vehicle "Terminator" will be presented in September
Military Reviewin Yandex News
Military Reviewin Google News
72 comments
Information
Dear reader, to leave comments on the publication, you must to register.