Who benefits from the Kenyan terrorist attack? 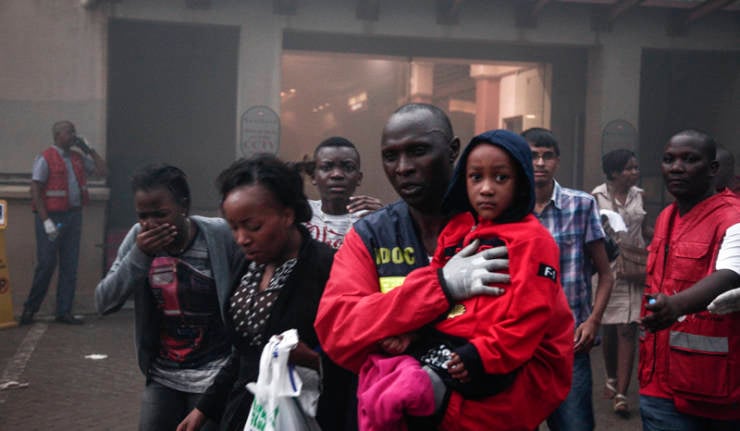 After the capture and murder of the hostages in Nairobi, the press and independent journalists are trying to find out if there is some kind of background to the terrorist attack and is there anyone behind the Somali Islamists.


According to the official versions of the incident, Al-Shabab, which controls a large part of Somalia, wanted to avenge Kenya for supporting the forces of the recognized Somali government, which with the help of the African Union peacekeeping forces (AMISOM) in 2011, took control of the Islamists. over the Somali capital Mogadishu. 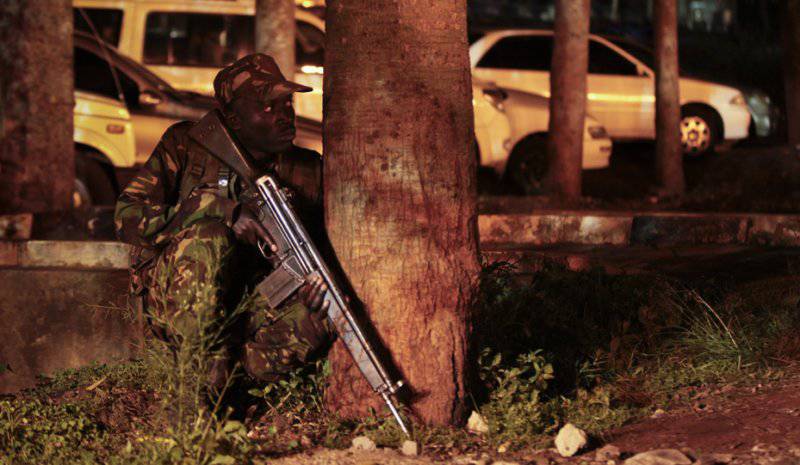 Investigators are just starting work at the site of the loudest terrorist act in Kenya, and most likely no one has any doubt that the bold takeover of the shopping center was carried out by the Al-Shabab militants, and not only Somalis participated in the seizure. According to some reports, terrorists from the United States and the United Kingdom who have links with al-Qaeda. Many sources reported that she was leading the White Widow terrorist group, Briton Samantha Lewthwaite, wife of Jarmain Lindsay (Jermaine Lindsay), one of the suicide bombers who organized a series of explosions on public transport in London on July 2005. 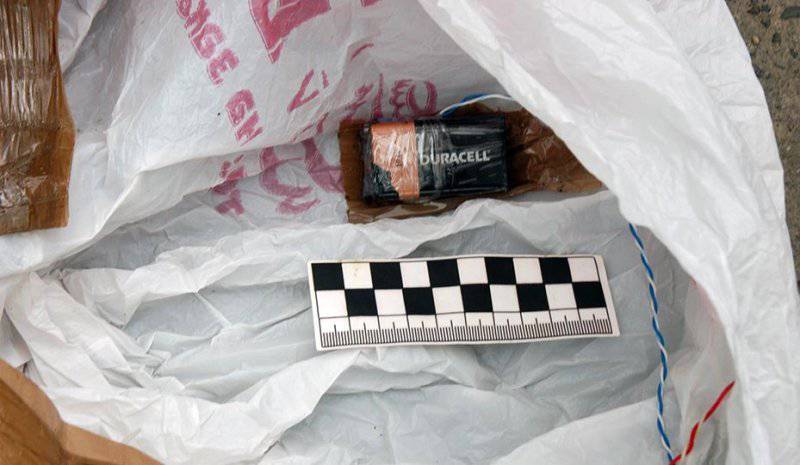 - "Al-Shabab" grouping needed a big demonstration effect "
However, some Internet users express doubts that Al-Shabab had sufficient resources to organize a terrorist act of such magnitude. Moreover, the organization’s terrorist attacks in Mogadishu fully allowed it to achieve its goals of intimidating opponents, and an attack on a popular center of expatriates in Nairobi could lead to an international retaliation. 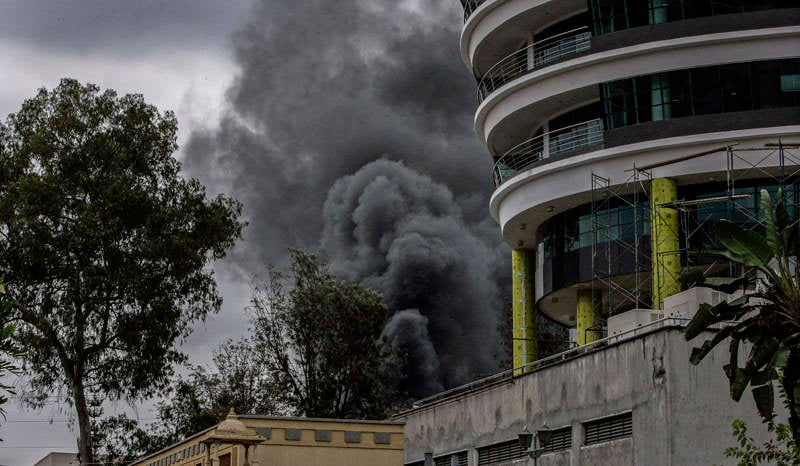 As the famous network activist Tony Cartalucci (Tony Cartalucci) notes on the pages of The Activist Post, the fact that relatives of Kenyan President Uhuru Kenyatta, his nephew Mbugua Mwangi and his bride, were killed in the attack, and his older sister, Christine Wambui, was nearly shot. Pratt, clearly indicates a high level of planning for this operation. 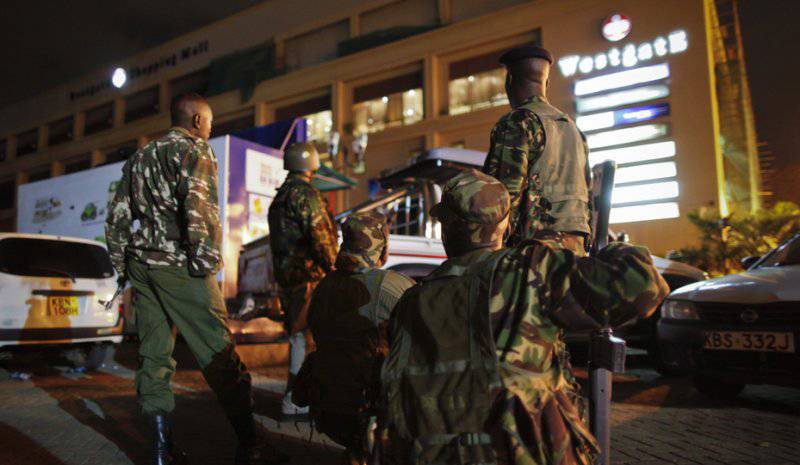 As Kartalucci notes, Kenyatta was able to win the 2013 presidential election of the year, largely due to prosecution by the International Criminal Court (ICC) and anti-Western rhetoric. Many Africans see the ICC as the embodiment of neo-colonialism and one of the main tools of the United States, Great Britain and the European Union to influence undesirable rulers and wage psychological warfare. For example, during the civil war in Libya, the ICC published false reports about the capture of Muammar Gaddafi’s son, Seif al-Islam, in order to demoralize his supporters.

By and large, the ICC has thrown a direct challenge to the African Union with its criminal cases against the Kenyan leadership. Its chairman, the Prime Minister of Ethiopia, Highmariam Desalene, directly accused the ICC of racism. Kenya is not a member state of this international judicial organization, but it is precisely its citizens who are trying to blame crimes against humanity.

Uhuru Kenyat is the son of Jomo Kenyat, one of the main fighters against British colonialism, the first prime minister and president of Kenya. The ICC accuses Uhuru Kenyatu and his entourage of financing the bloody unrest that erupted after the December 27 presidential election on December 2007: the struggle of incumbent President Mwai Kibaki and opposition figure Rail Odinji resulted in intertribal discord, which led to the death of the 2500 man.

Thus, according to Kartalucci, it cannot be excluded that just as the United States secretly supports al-Qaeda in Syria to overthrow President Bashar Assad, in Kenya, the African command of the American troops "helped" the terrorists to seize the Westgate shopping center at the right time. What could be the purpose of such assistance to terrorism? Great Britain and the United States invested heavily in the Kenyan economy under the previous president, Mwai Kibaki, and they don’t want their position in the country to be strengthened by Kenyat, who preferred to expand contacts with the West to visit Russia and China in August 2013, looking for new economic partners.

It is curious that a well-known American TV host and conspiracy theorist Alex Jones adheres to a similar opinion: in his latest program, he called the US President Barack Obama himself guilty of the attack, recalling his Kenyan roots and the alleged (but never confirmed) ) blood ties between him and the Kenyan political elite.

An Israeli analyst, Israel Shamir, in an interview with Golos Rossii, also blamed the United States for the growing terrorist threat in the Middle East and Africa: “Always, when Al-Qaeda appears, there are also Americans who are very close Paradoxically, it sounds very closely connected with it. In my view, terrorism is what the United States and its allies unleash so that they can have a good reason to intervene. Of course, there are usually serious reasons for terrorism. But apart from the bases, and weapon, logistics assistance, communication with the press. It does not grow on trees. Here, the Americans and their allies are beginning to play a big role, who have been promoting this movement up to a certain point. And then either they continue to support him, or they begin to fight him, as was the case in Afghanistan. "

The attack on the mall has already affected the economy of Kenya. According to The Christian Science Monitor, expatriates suffered the most as a result of the terrorist attack, and if they stop feeling safe, secured managers and skilled personnel will flee the country, who until recently could enjoy a very high standard of living in this African country. Kenya also runs the risk of losing the flow of tourists, on whom the service sector is heavily dependent.

It should be noted that not only US intelligence agencies are accused of planning an attack on the Westgate shopping center. Some Internet users claim that the attack is most beneficial to Kenyate. Immediately after the seizure of the shopping center, the presidential administration requested the ICC to postpone the commencement of court hearings on the events of the previous elections and postpone it from November 2013 to January 2014. Moreover, as the Mwakilishi edition reported, the ICC refused this request.

Also, the media reported that the secret services of Kenya were aware of the impending terrorist attack and it cannot be excluded that they wanted to carry out the operation "under a false flag" for some non-obvious external observer goals. It is not known whether Kenya may be interested in a full-scale invasion of Somalia and whether Kenyates had any accounts with his nephew killed by terrorists, however, supporters of conspiracy theories do not discount the most fantastic assumptions.

Terrorists from the Somali organization Al-Shabab seized the Westgate shopping center in the central part of Nairobi on September 21 of the year 2013. The military and police managed to neutralize the invaders and free the hostages only three days later. As a result of the attack, 67 people died, more than 200 were injured.