Putin’s Peace Mission: Views from the East and the West

27 September 2013
51
America, intoxicated with its own exclusiveness, which Barack Obama recently recalled, considers itself the bearer of a liberal ideology and sees itself in the front ranks of freedom fighters for individuals all over the world. However, not America, but Russia gains ever greater prestige on the planet. The reason for the strengthening of Moscow in the international arena is the unceasing attempts of the Russian leadership to resolve the Syrian crisis by peaceful means. 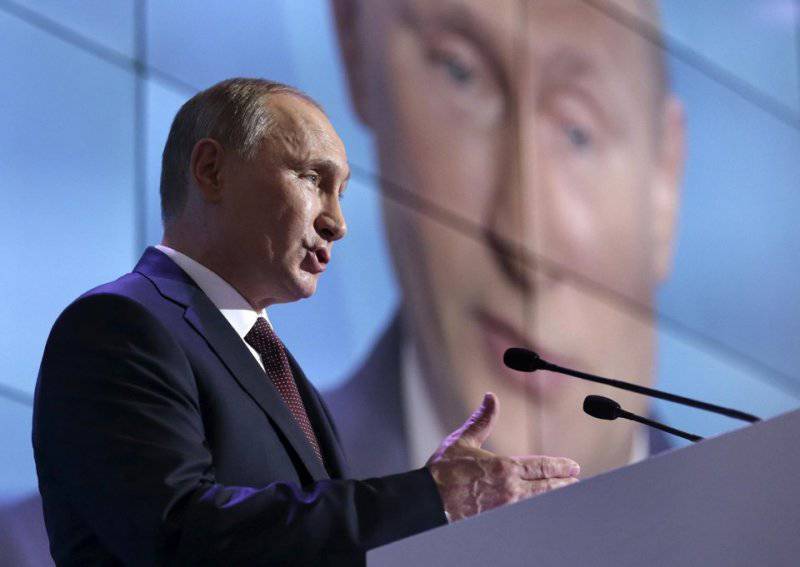 Professor-philosopher, author of more than 40 books and head of the Turkish industrial group "Bash Shirkatlar Grub" Haydar Bash website yenimesaj.com.tr (translation source - Mixednews.ru) clearly spoke on the subject of who and why today can be a leader on the world stage.

According to the scientist, the peoples of the world do not want to participate in wars for resources and play the role of extras in the play called “The Arab Spring”. And this unwillingness of mankind to fight better than others realized Putin. It was he who in a peaceful way prevented a war against Syria, the author notes.

Leaders of states pursuing a colonial policy are now losing their mission, and politicians acting peacefully are becoming true leaders. The leader, the writer notes, does not create the honors provided at official events. The world leader with its policy guarantees the safety of life, property, honor and does not harm either in word or deed.

As a Turk, Haydar Bash would probably like to see the world leader of the Turk. But alas ...

“Of course, our hearts would like a Turk to be such a person. We wish the Turkish nation and its leader to be a leader in the hearts and in reality of all of humanity as a whole. But, the one who contributes to the death of millions in Afghanistan, Iraq, Syria for any reason, the world will not accept as the center, it will only be used.

Unfortunately, those who contributed to the death, hunger and left stateless people of Syria, Egypt, Afghanistan, Libya, Tunisia, Yemen, Iraq, can not become a world leader. "

As for Putin, the desire of the New York Times to show a new world leader is connected, among other things, with Putin’s peace initiatives on Syria. In essence, Putin’s mission to protect property, life and the honor of the Muslim world from oppression of the United States and Israel is demonstrated, the author says. To this, the professor adds a mediation proposal voiced by Iran at the SCO summit.

The world was waiting for the new center, which would support the world and keep the aggressors, and waited. The scientist calls Russia such a center. The author calls Vladimir Putin the world leader.

In a review of newspapers Iran from 10-13 September "InoSMI" opinions about the new mission of Russia in the name of peace are being given.

Resalat writes that with the proposal of Russia to transfer the arsenals of chemical weapons Syria under international control, the intensity of the military conflict in Syria has declined. The newspaper led Iranian officials to respond to the Russian proposal: “Ms. Marzie Afham, secretary of the Iranian Foreign Ministry, said Iran welcomes Moscow’s initiative based on international monitoring of Syria’s arsenal of weapons, and views Russia’s desire to help the military end the military conflict as soon as possible. Syria.

In another issue of Resalat, on the front page, she posted a message about Vladimir Putin’s statement under the title: “V. Putin: "America will refuse the war after the proposals of Russia" ". Noting the efforts of the Russian leadership to prevent, in spite of Washington’s “militarism”, the outbreak of hostilities against Syria, the newspaper quotes the words of the Russian president: “It’s very difficult to force a country that is living under the constant threat of war to unilateral measures.”

Farda noted the positive attitude of the Iranian President to the Russian proposals, which he expressed during the Council of Heads of the SCO member states held in Bishkek. “The Russian Syrian chemical weapons initiative and the encouraging response of Damascus may keep the whole region from a new big war,” the newspaper quotes Rouhani.

In the next issue, commenting on the results of Hassan Rouhani’s participation in the SCO summit, Farda noted that his bilateral talks with the Russian president were the most important of all that were held during the summit with the participation of the Iranian president. Referring to the statement of the presidential press secretary D. Peskov, the publication reported on the invitation from Vladimir Putin to come to Tehran from Hasan Rouhani. V. Putin accepted the offer, however, "details regarding this visit have not yet been communicated."

It was an oriental look. Western - below.

In the edition "Newsday"Registered on Long Island, 16 September was published an article by Katie Young. A publicist pretty hard ironic about how Vladimir Putin, who recently pricked B. Obama in American exclusivity in the New York Times, “conveniently” forgot about the exclusivity of the Russians.

By the way, Katie Young knows the roots of Russian exclusivity. The latter, judging by the text, rests on the idea of ​​the "superiority" of paternalistic power and collective ties over individual rights. It is dangerous to encourage such an ideology, the journalist says without hesitation.

V. Putin’s comment on the concept of American exclusivity, which Barack Obama operates on, contains, in the author’s opinion, unintended irony, including due to Obama’s complicated relationship with this very exclusivity.

Young recalls that in the past, Obama has criticized conservatives for refusing American exclusivity. However, in the 2009 year, for the first time as a president, going abroad, Obama, in fact, downplayed America’s uniqueness, stating the following:

True, Obama immediately made a reservation. He said that Americans have core values ​​that, "despite all the flaws, are exceptional." He also stated about the unique role of American world leadership.

As for the recent speech on Syria, the journalist notes that Obama compared the exclusive status of America with the duty to protect innocent people abroad. Young finds a similar position unusual for the government. Indeed, it turns out that the concept of American exclusivity traditionally focuses on the principle of the priority of individuals over the state. Individuals have certain inalienable rights, and the government gets its power with their consent. This theory is controversial, or not, but it, nonetheless, writes a journalist, is rooted in the field of human rights.

And the Russian president blames Obama for the danger of encouraging people in their own exclusiveness. We should not forget that God made us equal, Young cites Putin’s words.

And then this passage follows:

“There are a lot of naglost. Putin's lecture belongs with the latter. If you’re in the world? Moreover, Putin’s entire political career exploiting this messianic nationalism.

Young was not too lazy to transliterate the Russian noun "insolence". The journalist speaks about Russian anecdotes, which mention the concepts of "impudence" (naglost) and super-inhibition (super naglost). Putin’s “lecture” belongs to the latter category. Apart from Russia, there is no other such country in the modern world, according to Young, whose culture would also be saturated with the idea of ​​unique greatness. In addition, the exploitation of “messianic nationalism” is the key to Putin’s entire political career, the author believes.

The uniqueness of Russia, which differs from the corrupt and individualistic West, is constantly promoted by the pro-government media and the Russian Orthodox Church, Putin’s loyal ally, notes C. Young.

In January, 2012, shortly before returning to the presidency, Putin wrote an article for "Independent newspaper", in which he declared: "The great mission of the Russians is to unite, fasten civilization." He allegedly, is a journalist, spoke of the role of ethnic Russians in a multinational country, but in combination with a well-known nostalgia for the Soviet empire, Putin’s words point to a grandiose vision of Russia's primacy in the world.

As for American exclusivity, its disadvantage can be seen in the fact that, according to Young, it is based on the idea of ​​freedom. But Russia's exclusivity is based on the superiority of paternalistic power and public interests over the rights of the individual - and this is really dangerous to encourage, the author believes.

Network commentators on the article Young spoke in favor of both American exclusivity and against it.

For example, stopbiggov believes that American exclusivity was based on freedom and for the sake of freedom, but Obama pays little attention to this concept, all the while trying to belittle the position of the United States.

Reader reaganwasright sure: Americans are different from people in any other country. The USA is the only country that welcomed migrants in due time, as a result of which it acquired the best and brightest representatives from all over the world. No other country has offered such conditions. This commentator calls Putin a “thief” and writes that all former branches of Russia have passed to members of the Politburo (in the original, “Politoboro”) and their friends. Putin and his team stole billions from the Russian people, believes reaganwasrightso "let's not praise Putin too much."

SarK0Y, speaking of exclusivity, remarks that the unions of egoists are always doomed to failure. In this he finds the reason why Russia survived on such a difficult path. Russia has never been an empire, this reader believes, it is a union of various nations.

Visitor shrubs notes that American exclusivity is based on the capture of countries or the planting of governments. The US is interested in oil, other resources and wealth, labor, as well as territory for military bases. It all comes down to making a profit, the reader notes. After World War II, no other country has destroyed so many millions of people and has not ravaged so many countries as one state did. The commentary author lists: Korea, Laos, Cambodia, Vietnam, Iraq, Libya, Afghanistan, Yemen, Somalia, the countries of Central and South America, Iran and others. Around this state has made enemies. Reminds shrubs about the atomic bombs in Japan, and about Agent Orange, and cluster bombs, napalm, white phosphorus, depleted uranium, etc. "You know," he bitterly ironizes, "we are an exceptional nation." In postscript shrubs notices that America without Russia would have lost the Second World War.

Mrs. Young, add on my own, should ask two questions. First: so whose “exclusivity” is more dangerous? And second: where will the individualists lead their road to freedom?

Observed and translated by Oleg Chuvakin
- especially for topwar.ru
Ctrl Enter
Noticed oshЫbku Highlight text and press. Ctrl + Enter
We are
Results of the week. "So I have a shaggy heightened"US National Security Interests and American Values: Primary and Secondary
Military Reviewin Yandex News
Military Reviewin Google News
51 comment
Information
Dear reader, to leave comments on the publication, you must to register.