Russian Helicopter Package in Afghanistan: a View from Brussels

26 September 2013
28
19-20 September, the author of these lines participated in the visit of Russian specialists on Afghanistan to NATO headquarters. During meetings with representatives of the Alliance, the question of Russian assistance to Afghanistan in the field of helicopters was repeatedly raised as one example of Russia's significant contribution to strengthening security in that country. For example, on September 19, Ambassador Alexander Vershbow, NATO Deputy Secretary General, highlighted the successes of Russia’s and NATO cooperation in areas such as countering drugs, providing transit for states that are members of the International Security Assistance Force in Afghanistan, and helping to strengthen the air force of this country.


Then another political officer at NATO headquarters explained in detail how Russia contributes to the repair of the helicopter fleet and the training of specialists. According to her, the idea to turn to Russia with a request for help arose from Anders Fogh Rasmussen, NATO Secretary General, during his visit to Russia in 2010. At that time, Afghanistan was acutely lacking spare parts and specialists for Mi-17 and Mi helicopters. -35.

As an illustration of the situation that developed in Afghanistan, an example was given when, after the helicopter crashed, the Afghans collected all the details that could be useful for the repair of other machines. The situation of the Afghan Air Force did not greatly save the fact that Bulgaria and the Czech Republic could supply spare parts that they produce under license. The training of technicians was also conducted, but as a NATO spokeswoman noted, “it was a very difficult process.

Russia agreed to provide the Afghan Air Force spare parts for helicopters at low prices. As mentioned, the price of the issue is several million dollars. To train Afghan repair technicians, Russia organized courses for more than three months at the Novosibirsk Aircraft Repair Plant. Three groups of ten people passed through these courses (total of 30 Afghans, which is 20% of all technicians of the country's Air Force). Moreover, the first ten people knew Russian, the rest did not. Moreover, among the second and third groups were illiterate.

Particularly noted was the fact that Russia handed over to Afghanistan one ambulance helicopter based on the Mi-17 (before that, Afghanistan had no such vehicles). From myself, it should be added that since at present 90% of all military operations are conducted by the armed forces of Afghanistan, the need for ambulance helicopters clearly cannot be satisfied with one Mi-17 machine.

On the same day, a member of the Permanent Mission of Russia to NATO met with a group of Russian specialists, who said that, in his opinion, the combat power of the Afghan Air Force would be provided mainly by Mi-17, whose number in the coming years will be about 80 machines. According to him, the agreement to create a trust fund for training Afghan specialists of the first and second levels and a pool of licensed spare parts will help Russia to solve a number of problems, in particular, to gain a foothold in the military equipment market in Afghanistan.

To the above, it should be added that according to the data for April 2013, the armed forces of Afghanistan have 36 Mi-17 helicopters and eight Mi-35 helicopters. It is expected that by 2016, the Afghan security agencies will operate more than 80 Mi-17. 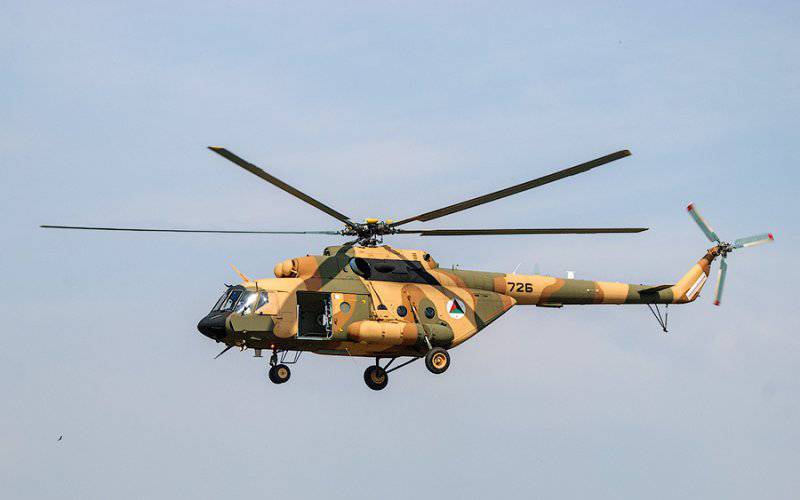 Mi-17 of Afghanistan in Kazan

The NATO-Russia Helicopter Maintenance Council Trust Fund was established in 2011. The Fund’s implementing organization is the NATO Support Agency (formerly the NATO Maintenance and Supply Agency). The initial financial and property contributions in the amount of about $ 23 million were made by Germany, Denmark, Italy, Luxembourg, the Netherlands, Russia, the USA, Turkey, Croatia, and the Czech Republic.

The first and second level of training of Afghan specialists, mentioned by a Russian diplomat, are maintenance and repair equipment and specialized and intermediate maintenance equipment. If the training of specialists of the first level has already been completed, then the training of specialists of the second level, according to the data for April 2013, has not yet begun. Given the approach of the formal date for the transfer of responsibility for security in Afghanistan to the national armed forces, courses for technicians to conduct specialized and intermediate maintenance may begin shortly.

Ctrl Enter
Noticed a mistake Highlight text and press. Ctrl + Enter
We are
Vershbow said Russia should be grateful to NATO for eastward expansion
28 comments
Information
Dear reader, to leave comments on the publication, you must to register.