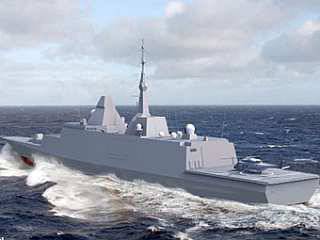 France faces serious difficulties in trying to find buyers for the ultramodern multi-purpose frigates FREMM, which the military industry of the country had recently been proud of.


According to the Eco business newspaper, experts come to this conclusion on the basis of a recent speech at the French National Assembly of Thales and DCNS corporations, who answered questions from members of the lower house of parliament.

This class of multipurpose frigates, created by France in cooperation with Italy, is intended for anti-submarine and air defense, destruction of surface ships and strikes against ground targets in the depths of the enemy’s territory. Each of them has the ability to act as a control ship of the target group. His versions can have helicopters and cruise missiles.

The manufacturer emphasizes that the FREMM is unparalleled in its class (displacement 6000 t) due to the build quality, reliability of all components used, low fuel consumption at cruising speed.

However, at present only one frigate was purchased by the state of Morocco, and still in 2007. At the same time, according to Eco, the Moroccan side was actually forced to make the deal by then-French President Nicolas Sarkozy, who demanded a kind of “compensation” for Rabat previously refused to purchase French aircraft "Rafale".

According to DCNS CEO Patrick Boissier, the president said that "the FREMM frigates created for a number of countries turned out to be too large, too technical, in particular, too automated." In this regard, the entrepreneur proposes to begin in the framework of the new Law on the military program the creation of an “intermediate” FTI frigate in its characteristics.

At the hearings in the National Assembly, the head of the Thales corporation, specializing in military electronics, in particular, Jean-Bernard Levy openly admitted that “in the form in which they were conceived and produced, it is difficult for frigates to export.” He also supported the creation of an "intermediate" version of the warship.

Experts in this regard recall that the frigate, which was highly automated and stuffed with the most modern electronics, was designed with the largest purchases in mind. fleetswho sought at that moment to reduce the number of crews of their ships. However, smaller countries do not pursue such goals in their arms procurement policy.

The cost of the multipurpose frigate FREMM exceeds 500 million euros. From the Navy of Morocco received an export order for only one of them. The French Navy under the 2005 contract ordered 11 ships, including nine in the antisubmarine defense version and two in the air defense variant. The company DCNS 18 September at the shipyard (CVD) in Lorient launched the multipurpose frigate FREMM Provence for the French Navy. Its construction began in December of 2010 and now it will be completed at the wall, and installation of onboard equipment and weapons will begin in its compartments.

According to DCNS, at present, CVD production facilities in Lorient provide for the construction of one FREMM frigate per year. In the case of an increase in the number of orders from foreign countries, an increase in output to two ships per year is envisaged.

Ctrl Enter
Noticed oshЫbku Highlight text and press. Ctrl + Enter
We are
The action “Military service under the contract is your choice!” In Rostov-on-Don: future contract servicemen, exhibitions and “Russian Knights”Morocco received the frigate FREMM
28 comments
Information
Dear reader, to leave comments on the publication, you must to register.