26 September 2013
44
Currently, trucks are used to deliver a wide variety of goods and to provide services. Modern trucks are equipped with the latest technology, which provides convenience for the driver and safety on the road. But in the years of the Great Patriotic War, even the simplest trucks made real feats - this is the transportation of weapons, ammunition and food delivery. What is the cost of food delivery along the “Road of Life” to Leningrad surrounded. About such a "hard worker" and will be discussed in this article. 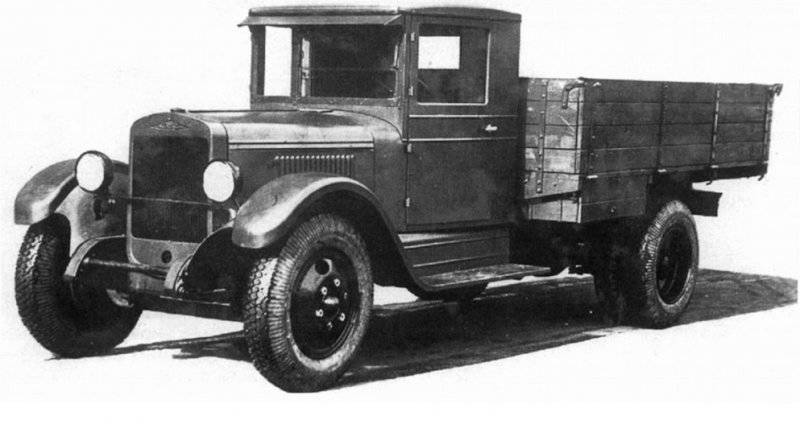 Assembly of an onboard three-ton truck of a universal purpose ZIS-5В (Stalin plant, military) at a Soviet plant

In 1931, the Automotive Moscow Society (AMO) plant was rebuilt, and proceeded to build a new AMO-2 truck. Units and components for the car was delivered from America. Soon AMO-2 was modernized, and AMO-3 and AMO-4 saw the light. AMO-3 (tonnage of tonnage 2,5) in 1933 plant was again seriously upgraded. The new car was named ZiS - Plant named after Stalin. Unlike its predecessor, AMO - 3 and ZIS - 5 cars were made entirely of Soviet-made parts. 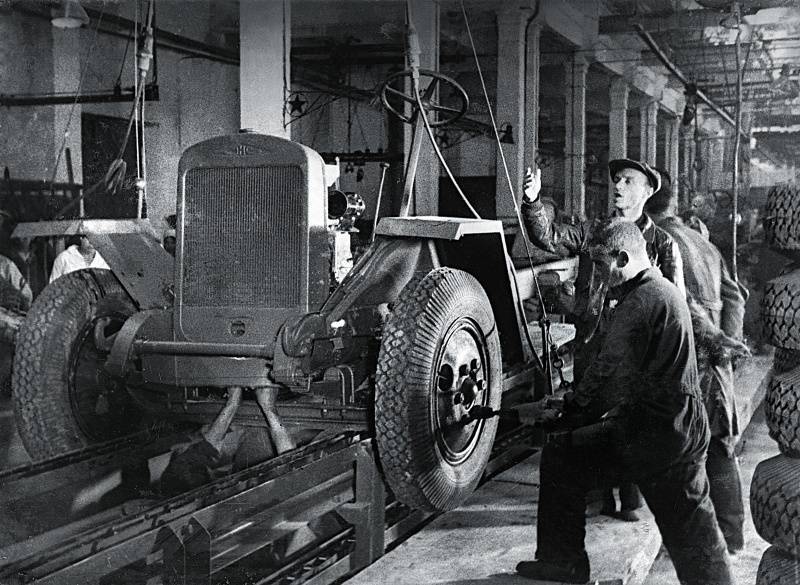 The first batch of ZIS - 5, consisting of 10 machines was assembled in June of the 1933 year. The 5 of October 1 of the year without preliminary assembly of the prototype was delivered to the ZIS-1933 conveyor. The simplicity of the design allowed to start the assembly, without any major disruptions. Serial assembly of the new car was launched in the shortest possible time.

The design of the "three-ton" (this nickname ZiS-5 received by the people, the troops also called it "Zakhar Ivanovich") was a classic for that time. The design was developed practically from scratch by AMO-ZIS engineers: Vazhinsky EI, Lyalin VI and Strokanov B.D.. The main emphasis in the development of steel were the simplification of the car and the improvement of maintainability. In addition, it was necessary to improve the quality of operational characteristics - an increase in the terrain and carrying capacity of the car.

Engine capacity has been increased to 5,55 liters, and power is forced to 73 HP. Also redid the radiator and air filter, modernized the carburetor. Both axles, the propeller shaft, the gearbox and the frame were changed. On the rear axle significantly increased ground clearance, the front brakes were replaced with a mechanical drive. Cabin ZiS-5 was significantly different from the cab predecessor. On the truck it was made without the canvas sidewall. 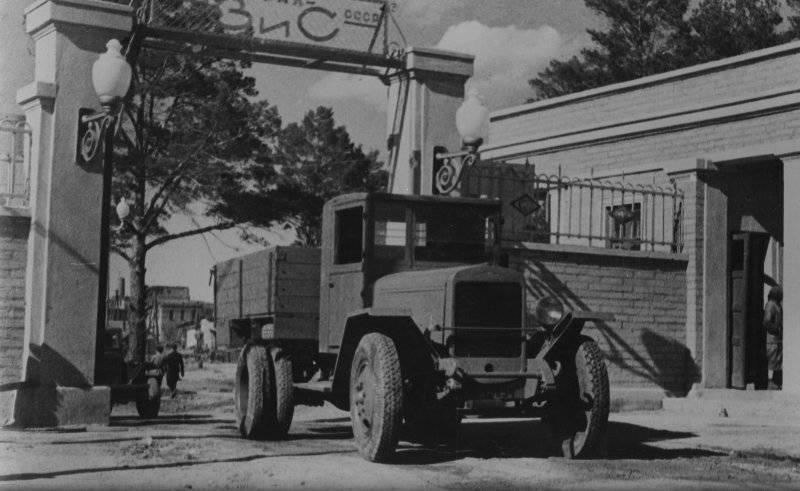 During the war years, the production of cars was constantly increasing. If in the first month there were only six or seven cars a day, then after a while the number was already tens and hundreds. The truck has proven itself on the roads and quickly gained a reputation as a reliable and unpretentious technology. As a rule, they were loaded on ZIS-5 4-5 tons, even though the car was designed to carry three tons. Despite the constant overload, the car was calm, without strain. Improved performance was achieved through the installation of low-speed engine. Traction capabilities of the ZIS-5 are very close to all-wheel drive trucks (due to the increased cross-country ability, the car could be used on roads of any category all year round).

Insufficient torsional rigidity of the carrier frame (a small omission in the design) played to increase the maneuverability, since the wheel travel increased when overcoming the irregularities. The upgraded engine was launched without any problems at low temperatures, and any low-grade gasoline was suitable for its operation. In curb condition, the truck could tow a trailer weighing up to 3,5 tons. The run to the first overhaul was 100 thousand km. 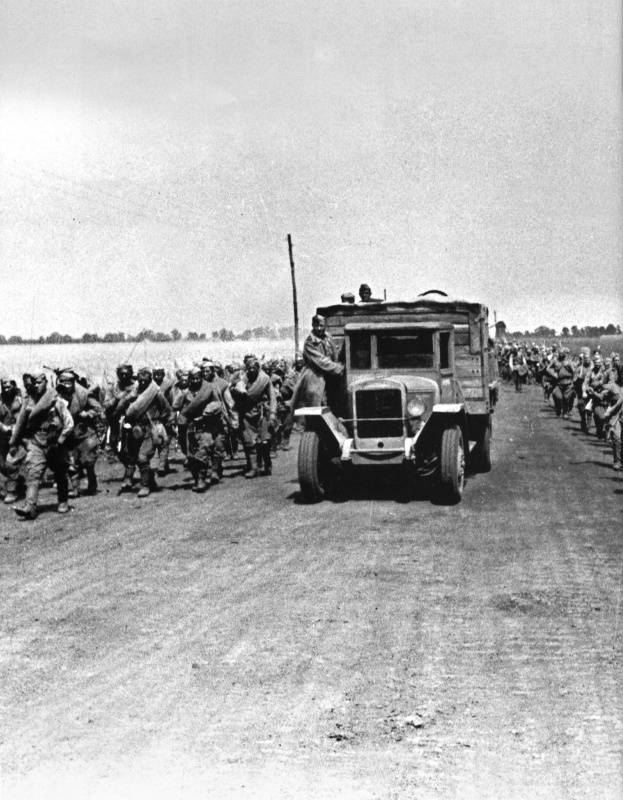 Soviet troops on the march. The infantry is moving along the side of the road, in the center - the truck ZIS-5В

During the Second World War, the design of the ZIS-5 truck was greatly simplified. Wood and plywood were used for the production of the cabin, and the wings began to bend out of rolled products (stamping was used before the war). Brakes were removed on the front wheels. The same fate befell the right headlamp. The number of folding sides reduced to one. At the end of the war, the pre-war equipment was partially restored. 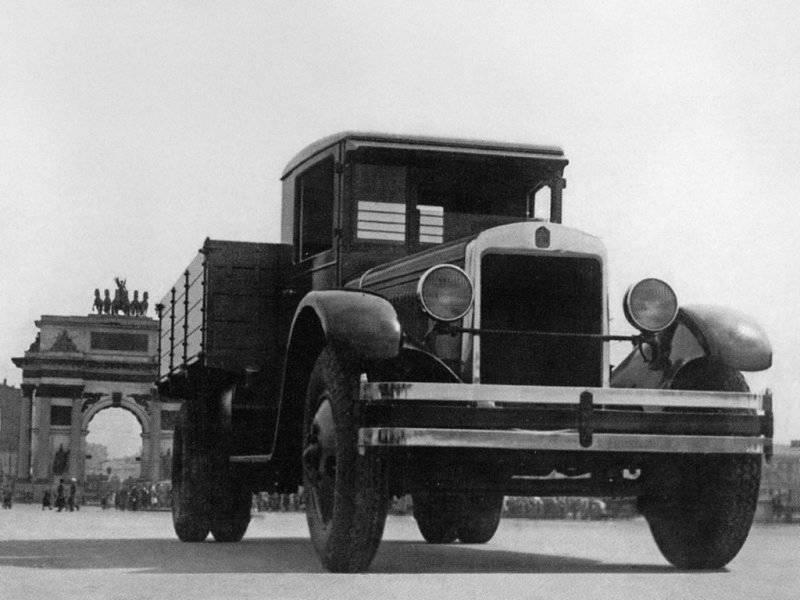 ZIS-5 was also exported to other countries. For example, in 1934, a batch of 100 pcs. 5 was sold to Turkey. The export version of the ZIS-5 was distinguished by a nickel-plated radiator and the presence of a bumper consisting of two nickel-plated steel strips. Later, a modified ZIS-14 with an extended wheelbase and a ZIS-8 bus were exported. In 1930-ies, VMS buses and trucks were exported to Afghanistan, Iran, Iraq, China, Spain, Lithuania, Latvia, Romania, Mongolia, Estonia and Turkey. A fairly large ZIS park was formed after the Soviet-Finnish war in Finland, and of course, in the territories of the USSR occupied by Germany occupied in 1941 — 1944 by Germany. 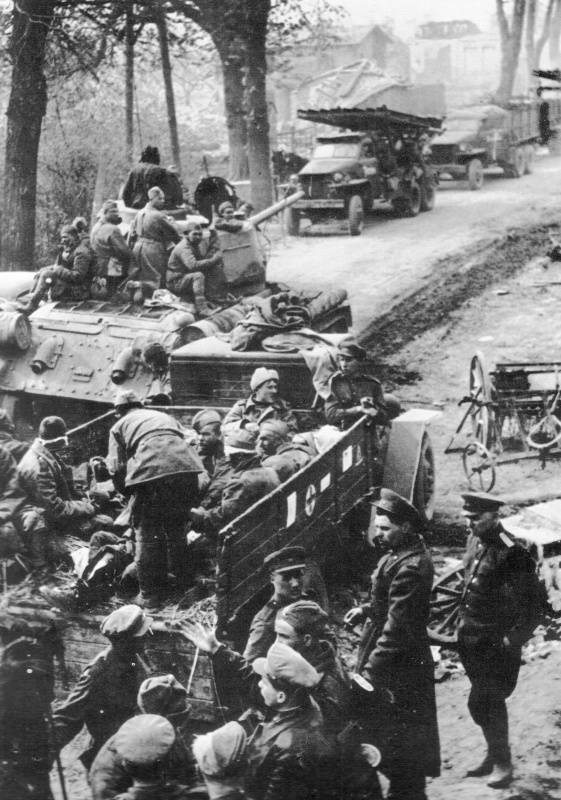 Soviet soldiers, including women, are pushing truck ZiS-5 stuck in the mud 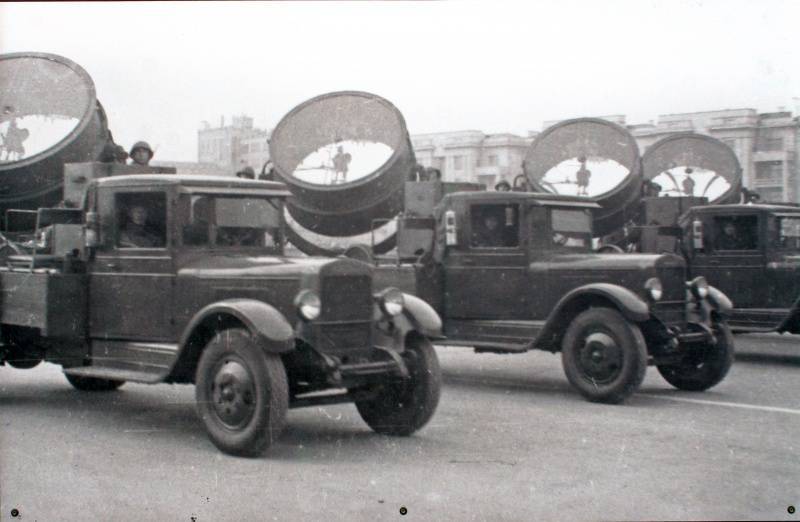 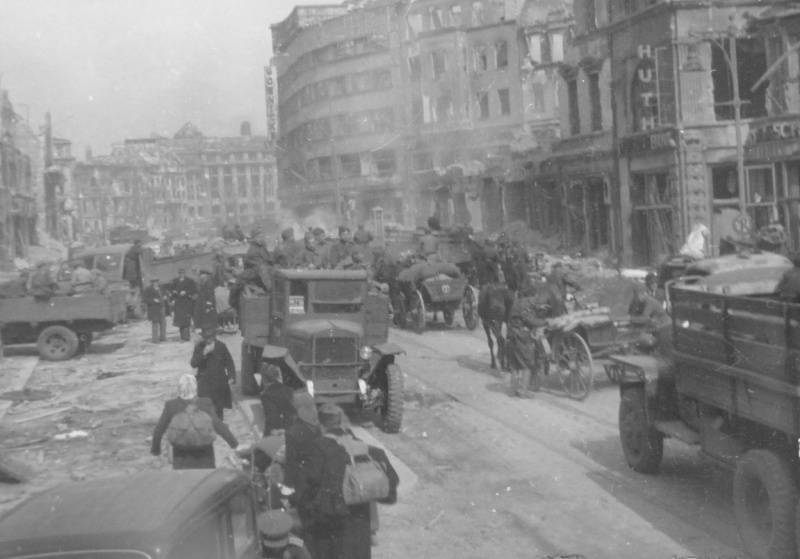 Soviet cars and German civilians on the streets of Berlin. In the center of the photo - truck ZIS-5.