Setkom "Storm" for the police and security structures

26 September 2013
12
Specialists of the research and production enterprise “VALAR”, located in the city of Ivano-Frankivsk in Ukraine, created and tested quite unusual weapon non-lethal impact - manual net "Storm". This net is designed for use by the police or peacekeeping forces to fight aggressively protesters, riots, fans. Setk "Storm" is a fairly effective and simple means of dealing with violators of public order in modern urban environments, while it is completely safe for people, said director of the company Valery Artsikhovsky.


It is worth noting that the idea of ​​immobilizing the enemy through the network is not new. It was used in ancient times, for example, in ancient Rome in gladiatorial arenas. Fighters-gladiators, who were armed with a network, called the Retiarii. Naturally, in modern conditions, no one is going to throw a network manually at a person. For this purpose, special technical devices were invented - netting kites, which can be useful to the policeman in the fight against instigators of the riots and border guards in the fight against pirates or poachers.

According to the director of the Ukrainian enterprise, one of the main drawbacks that exist in the world of analogs was the difficulty of laying and reloading the grid. “According to experience, only 50% of users can correctly lay the net on their own, while with improper styling, it will not be possible to produce an effective shot, the mesh will simply not open,” said Artsikhovsky. Specialists of the company "VALAR" decided to pre-stack the grid in special plastic cartridges, two types of "V" and "VS".

Cartridges of type "V" have a pressed and laid mesh, and the second type of "VS" - an additional ampoule, which contains a volatile tear preparation that is authorized for use by law enforcement agencies of Ukraine. To stretch the mesh used special rubber fireballs. Product developers claim that their use will not cause even the most minimal injury to the offender. Cartridges with a squib and weights of shooting are combined for shooting in a single unit - a replaceable net head. 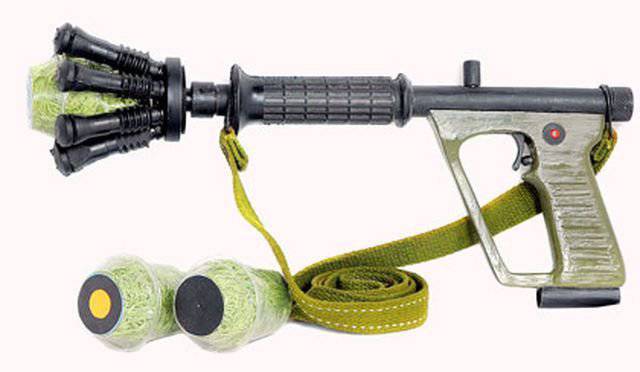 In a special pouch the law enforcement officer can carry 6 charged blocks. The reload time of the “Sturm” grid with these interchangeable heads is about 4-5 seconds. After selecting the target and pressing the trigger, the squib is triggered and a compressed mesh is ejected in the direction of the target to a distance of up to 10 meters. At a distance of not less than 6 meters from the person firing, the net is weighed down into webs with a diameter of 3,5 meters, which covers and immobilizes the target.

When using “VS” cartridges with an interval of 0,2 seconds after the mesh is opened, the process of spraying tear gas occurs. According to the director of the research and production enterprise VALAR, this mixture for some time quite effectively neutralizes all citizens covered with a grid, including those who are in a state of narcotic or alcohol intoxication. The net itself, which is made of durable fiber, has a cellular structure with 5x5 cells, see. A single thread of this network is able to withstand a tensile strength of at least 8 kilograms. It is not surprising that not only Ukrainian, but also Russian security officials began to look closely at the Storm.

Extensive ground tests of the net-thrower under conditions that were as close as possible to the combat ones, as well as the pilot operation of the model showed that there were some drawbacks in its design. In addition, comparative tests of net comets from other manufacturers from Russia, China and Ukraine were conducted. All of this, with a general positive attitude towards the model, made it difficult to actually use the Storm net comets, and often was the reason for not using them.

Tests of foreign models have demonstrated that all known net comets today have common design flaws that significantly impair their combat performance. The very idea of ​​their use and retention of the enemy through the network is perceived quite positively, but existing design flaws could sometimes lead to complete frustration in the widespread use of this technique. 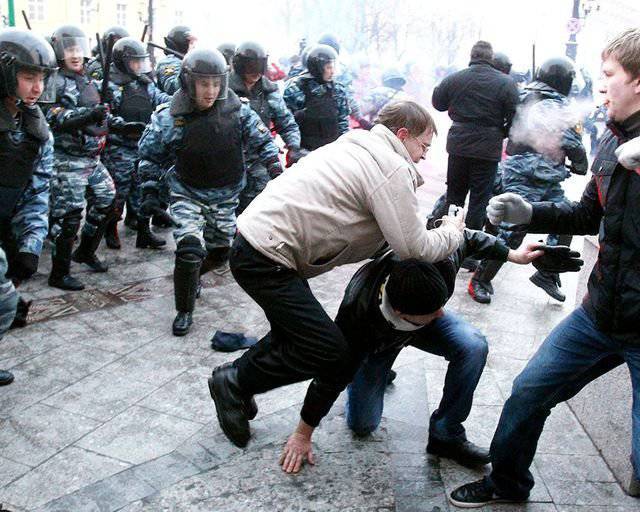 The lack of sighting devices was considered to be a significant disadvantage of the reticule, which in turn excluded the possibility of a guaranteed net coverage of the target in the conditions of time deficit and the psychological psychological tension of the user of the weapon. In addition, aiming with the direction of the body, which is now used in well-known structures, has a rather low efficiency. As the statistics clearly demonstrated, in real combat conditions only 10-15% of shots from the grid are effective and only conditionally they can be called sighting.

Also, a significant drawback of some models is the need to self-charge the grid by the user of the weapon. This operation, performed independently in artisanal conditions and not sufficiently qualified by the user, does not guarantee the correct placement of the grid, and therefore leads to the fact that it can only partially open. In addition, the long reloading process is unacceptable, since it requires a significant investment of time for re-firing, which is very important in a real combat situation, when the situation may change at any second. At its core, the reloading of many modern net komplets is not far from reloading “shompolnye guns” somewhere of the XVI century.

The upgraded Ukrainian-made mesh set began to be equipped with a laser sighting device, it is safety-safe, equipped with cartridges and can guaranteedly cover the target and immobilize the enemy at a distance of 8-10 meters. The modernization has made it possible to reduce the cost of its production technology, and also expanded the possibilities of its actual combat use. The new design allows you to repair and maintain the meshcom without the use of special tools, and changing the recharge node has reduced the time of this operation to a few seconds.

Ready-to-use cartridges for various purposes are used in the modernized Ukrainian “Sturm” grid, which have a high reliability of actuation directly at the target. They are made of plastic and filled with compressed mesh, laid on a special technology. Their design ensures full disclosure of the cartridge case and the release of the net when fired. The network is stretched by special weights made of soft rubber, which can not bring harm to a person; the initial speed of the flight of the network is about 19-20 m / s. Cartridges for metkomet are disposable and have a special color marking, which differs depending on the purpose. They are already delivered to the consumer in fully operational condition. 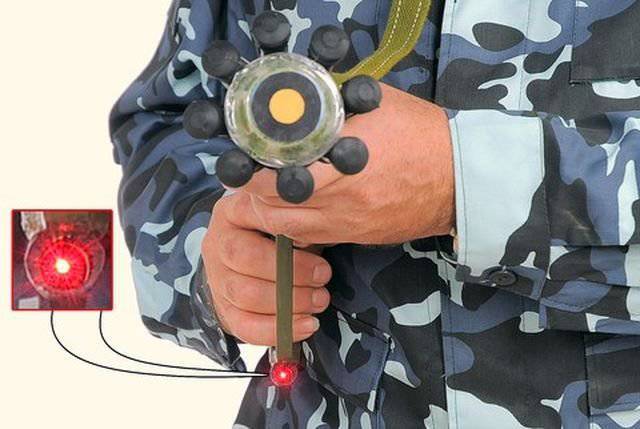 The use of the VS cartridge ensures that the affected area is treated with tear gas, which is very effective in city conditions. The cartridge uses a volatile, finely divided preparation, which includes substances that are approved for use — orthochlorobenzylidenedumalonitrile and pellargonic acid morpholide. The use of such a cartridge not only immobilizes the object, but also deprives it for some time the ability to navigate in space.

The sight of the net was placed on the end of the handle and controlled with the thumb of the hand holding it. For effective use of the net bomb for the intended purpose, the shot is performed when choosing the effective range (up to 10 meters) and aiming the target pointer at the chest level with a laser spot.

In addition, a new head “Putanka” was tested, in which Bolas technology was implemented. In this head there is a certain number of weights, which are interconnected in pairs with the help of a high-strength elastic cord. After the shot is fired, the weights fly along diverging paths and stretch the cords, and when they meet the barrier, they revolve around it, while the cord wraps around and binds the violator of public order.

It can be noted that the modernization has significantly increased the efficiency of the use of the Ukrainian “Sturm” net set for its intended purpose. The constructive solutions used in it can also be applied in other nettings, for example, “Dingo”, “Duel”, “Boundary”, “Snow”, etc. Multivariate execution of the “Sturm” setcomet allows it to be used for solving various tasks that are not only related to law enforcement. For example, for catching birds and large animals.