The villages of Tatarstan are settled by fundamentalist migrants ... New Kondopoga? 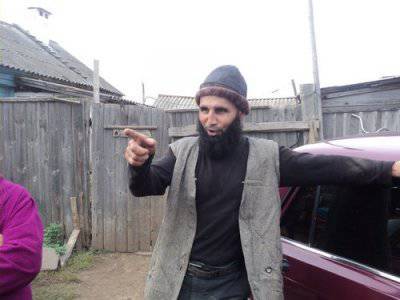 Historically, Shumkovo was a Russian village. His chronicle begins with the 1790 year, when it was founded on the orders of Catherine II to settle empty lands. The inhabitants of the village were state peasants, many of whom had managed to break out into the merchant class. In 1874-1880, the Ascension Church was built in the village. At the beginning of the twentieth century in the village were 700 yards. Today, 320 people live in the village, of which about 100 are registered Tajiks.

In Soviet times, the Tatars began to settle there, which did not cause tension. Recently, however, the traditional ethnic composition in the village began to change rapidly. Along with the Russian and Tatar population in 2000, the Tajik population visited the village actively. Information about the process of active migration of a religiously motivated population from Central Asia and the North Caucasus has been received repeatedly from different regions of Tatarstan (in the cities this is more noticeable). In order to check it, a trip was made to the village of Shumkovo, the situation in which, apparently, is already tense to the limit, with the result that we can expect a recurrence of the “Kondopoga syndrome” in this Russian village. In the Rybno-Slobodsky district itself there is still the same picture in the villages Khutor and Kachkalak. The situation is similar to that in the village of Shumkovo, there is in other areas of Tatarstan with a noticeable presence of the Caucasian and Central Asian population.

About the unfavorable social situation in the countryside can be understood at the entrance to it. The destroyed buildings of cowsheds, overgrown with weeds, is a clear evidence of this. If in the 2006 year, as reported a year ago, the regional agrarian newspaper "Zemlya Zemlettsa" had three stores (one Ripovsky and two private ones), now there is only one store that we saw. However, the all-Russian economic crisis in the countryside, creating a disaster for the villagers, in Shumkovo is also overshadowed by the ethno-religious situation.

From the Tajik population, 42-year-old Shakheretdin, who came to Russia in 1995, agreed to talk with us. After long journeys around the country (he has a second Russian wife in Yekaterinburg with his daughter), he settled in Shumkovo, bought a house, moved his first wife and his children from Tajikistan, some of whom were already born here. Stroking a thick beard, he told us that one of his son is studying at the Islamic University of Al-Azhar in Egypt, and very well relates to the Islamists ruling there, the other in one of the Kazan madrasas. The rest of the children are small. In his words, Scheheretdin himself works as a builder in Kazan, but local residents doubt the honest work of their new uninvited villagers, hinting at their dubious income related to drug trafficking. However, the residents are most worried about something else: they fear the Wahhabi expansion in the village.

“We want to build our own mosque, but the residents are against it, although we would be happy if they also prayed there,” complains Scheheretdin, hinting that the local population is completely drunk, although we have not seen drunk people in the village.

We go through the unasphalted village. We pass by one of the houses in which the Tajik family lives. The woman who saw us immediately ran into the house. Tajik children ride by bicycles. As it turned out, in the Shumkov school there is only one child from local residents, all the rest are Tajik. We meet two Russian women. We talked. "They want to build their own mosque here, not only we, but also the Tatars against." “Why is that?”, We ask. “Tatars say: there are mosques in the neighboring Tatar villages, we go there to perform all the rituals, and we don’t want to pray with the Tajiks, they have another Islam, not ours,” the women say, adding that the Tajiks are far from peaceful: the village, leading Islamic agitation, not only the Tatars, but also the Russian inhabitants are being urged to convert to Islam, and in a variety from which the Tatars themselves deny. The propaganda of unconventional Islam for the Tatars is conducted regularly, which clearly annoys the inhabitants.

The chairman of the Shumkovsky Village Council, Gabdelbar Zakirov, said that all Tajiks live legally and all have permissions to do so. The village official acknowledged that the problem of ethno-religious relations is taking place, and there have even been fights, but urged the situation not to be dramatized. “Yes, the locals are against their mosque, but we are negotiating,” Zakirov admits, not wanting to go into details.

The director of the mini-factory under construction in Shumkovo, Murat Galimzyanov, was more outspoken: "The Tatars living in the village are also against migrants, because they have a completely different, non-traditional Islam, not the same as in Tatarstan." The local entrepreneur admitted that “migrants act slyly: where they meet with decisive resistance to the establishment of their own order, they retreat, where there is no resistance, they become impudent”. Among such examples, he noted the question of the construction of a mosque: here the locals all united in strong protest, including the Tatars, who recognize the village as Russian, and for performing rites are sent to the neighboring Tatar villages. And the construction of the mosque is still frozen. But in the matter of the chaotic pasture of rams, migrants are more arrogant here: “Their cattle often walk without supervision, run into the gardens, eating planted vegetables, and if they look after it, they charge it to young children who send it to graze and, accordingly, shit right in the village orthodox cemetery or in the church, but you can't punish a child, and adult Tajiks hide behind their children. ”

The head teacher of the Shumkov school Nadezhda Kondratyeva, now a pensioner, ran to catch up with us, having learned from our neighbors about our arrival. “You have no idea what's going on here!”, A woman tells us, out of breath. According to the teacher, 7 lives in the village of very large Tajik families, among which there are polygamous ones, but the number of those who are registered reaches hundreds of people, many of whom do not live in the village itself. “Men walk around in short pants, beards are three fingers long, but after the terrorist attack in Kazan, they began to mimic clothes, wear long pants like everyone else,” notes Nadezhda Kondratieva, who turns out to be an active Internet user, from whom much has come to learn about non-traditional forms of foreign Islam for Tatarstan and notice this in their new neighbors in the village. A school teacher told us that in the village school one local child and all the other children of migrants study: “I don’t know what language the teachers speak to them”. As it turned out, the Tajiks initially wanted the building of the post office, which is a merchant’s mansion from the beginning of the twentieth century, to be turned into its mosque. However, when residents were against it, the migrants decided to build their prayer institution from scratch. “Here they cleared a place for a mosque,” ​​Kondratieff’s plot prepared for construction shows, “but we, the villagers, staged a village gathering, where everyone opposed it unanimously, including the Tatars, who said that they conduct religious rites in neighboring Tatar villages , and they will not go to the Wahhabi mosque ”.

Residents show the house, as they called it, the Tajik imam. “He lived 12 for years in North Waziristan (Pakistan), now he came here to preach,” they told us in a village shop. Home owner was not there, looked out his young children, one of whom is called Zawahiri. Imam's neighbor Pavel and his wife report that Tajiks often come to him in cars: “Sometimes 20 machines will come right away, they pray there”.

We walked to the old abandoned Ascension Church, which stands alone from the village. The temple was desecrated in the 1930s. According to residents, sometimes Orthodox youth come there on Saturday, cleans the temple from the dung left by sheep. Someone started a rumor that supposedly Kazan Metropolis plans to build a monastery near the village and restore the temple. How this is so far is unknown.

It is not clear how the secular authorities are guided both at the level of the Rybnoe-Slobodsky district and at the level of Tatarstan, if they allow people to take up villages who studied or fought somewhere in the Greater Middle East. We all believed that the colonization of the other-ethnic and foreign-religious population of Russia goes on the borders with China, but it turns out that this is already taking place in the very heart of the country - in the Volga region. It is obvious that even if the Tatar population notes that Islam is unconventional for Russia among the newcomers, is it worth it then to allow the compact living of its carriers. References “to eternally drinking” Russians and Tatars who have departed from the supposedly “pure” Islam are usually conducted by different Moscow sheiks who have assisted terrorists like Said Buryatsky and Islamist information resources on the Internet. The fact that, along with labor migration, Islamic fundamentalism is penetrating has long been noticed by experts. It is strange that local supervisory authorities are not even interested in the activities of religiously motivated migrants living in the villages of Tatarstan. Is it deliberately done this way, that they give the go-ahead to living “hardworking and non-drinking co-religionists”, who do not understand where they work and where they get such income, or because of criminal stupidity? But the second generation of migrants is growing up, which was already born in Russia, but completely cultural and civilizational values ​​that do not share it. Will we get an analogue of France or Germany, where stupid Europeans, guided by merciless tolerance and ideas of multiculturalism, are now afraid to go into some quarters of their own cities even during the day?

Before leaving, we were approached by a local resident. To the question “How do you live?” She answered: “I am afraid to say this, but it would be better if they would live in their homeland. And we would be calm from this. " We have nothing left but to wish her courage, strength and hope. “Hope and spiritual strength will appear only when an Orthodox church is restored here,” looking at the abandoned Ascension Church, a simple Russian woman crossed herself.

Ctrl Enter
Noticed oshЫbku Highlight text and press. Ctrl + Enter
We are
Tatarstan authorities will restore order in the republic - ShariaForeign religious influence on the Muslims of Tatarstan in the post-Soviet period
Military Reviewin Yandex News
Military Reviewin Google News
95 comments
Information
Dear reader, to leave comments on the publication, you must to register.