26 September 2013
2
In mid-September, the Pentagon signed a new contract with Boeing. In accordance with this document, an aircraft manufacturer must manufacture and deliver several dozen ScanEagle unmanned aerial vehicles to the US military. In addition to the devices themselves, Boeing must transfer to the customer the necessary related equipment. The total cost of all products ordered by the US military is 300 million dollars. The last drones and equipment must be delivered before the autumn 2016 of the year. 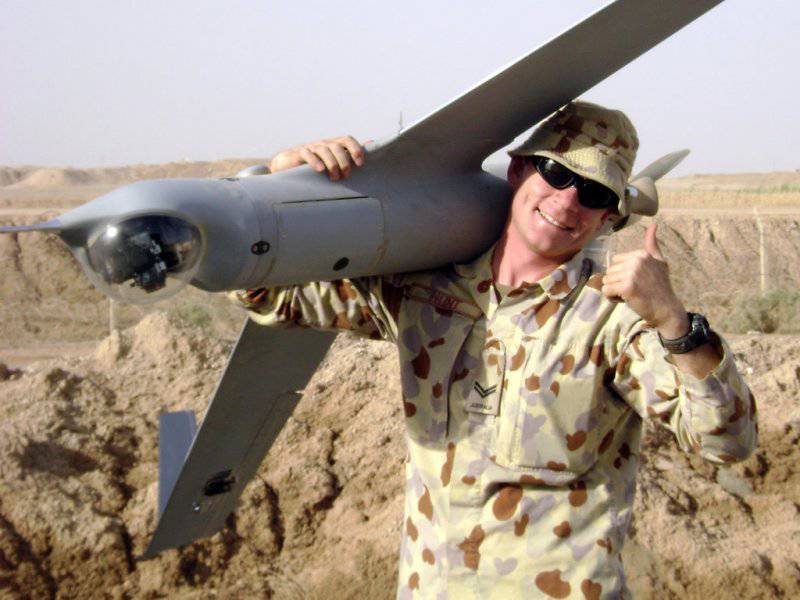 The current contract signed by the Pentagon and Boeing and implying the delivery of ScanEagle UAVs is not the first such document. The implementation of a similar contract, signed back in 2009, is currently being completed. That agreement implied the delivery of unmanned aerial vehicles with a total value of 250 million dollars for the needs of the Special Operations Forces Command (USSOCOM). Thus, having completed the execution of one order for five years, Boeing will continue to build ScanEagle drones as part of the new contract.

According to foreign media, the purpose of the new contract is to replace UAVs that have completed their service, as well as supply the necessary spare parts, etc. products. Thus, the new drones will not only complement, but also replace the existing ones in the army. The second goal of the contract is to create a new system that will support the operation of its vehicles. It is assumed that units using ScanEagle UAVs will interact directly with Boeing specialists, including in theaters of operations.

Operation of unmanned aerial vehicles Boeing Insitu ScanEagle began in 2005 year. The first users were the US Navy. The experience of using new UAVs has shown their effectiveness in finding and detecting various objects. The fact of signing a new contract suggests that the US military is completely satisfied with the available equipment and is ready to continue its operation. 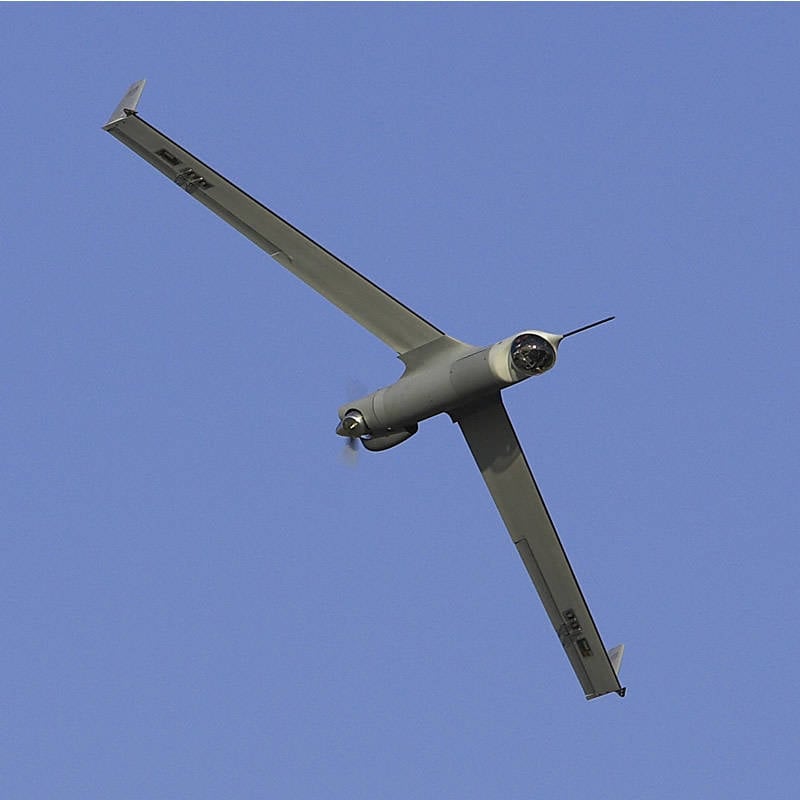 The similar successes of the ScanEagle UAV can be explained by its “origin”. Military drones were created on the basis of the commercial project Insitu SeaScan, designed to perform meteorological reconnaissance and other tasks related to the work of commercial or fishing fleet. Under an agreement between Insitu and Boeing, SeaScan has become the basis for a new military UAV.

ScanEagle is an aircraft made according to the "tailless" scheme. The UAV is equipped with a swept wing with a 3,1 span of a meter with flaps folded up. Almost the entire rear edge of the wing is equipped with mechanization. A relatively small fuselage (about 1,4 meter length) contains a piston engine with an 1,5 horsepower, driving a pushing propeller. The take-off weight of the ScanEagle UAV does not exceed 20 kg.

With such dimensions, weight, and aerodynamics, the ScanEagle drone has flight data optimized for long-term patrols of specified areas. It can fly at speeds up to 130 km / h and climb to heights up to 4900 meters. An economical engine and relatively voluminous fuel tanks allow the unit to fly for more than 20 hours. At the moment, the record is the flight 2006 of the year, which lasted 22 hours 8 minutes. Like a number of other modern UAVs, the Boeing Insitu ScanEagle does not need large, equipped platforms for takeoff. The device takes off from a pneumatic catapult and sits using the SkyHook system. The latter is a foldable boom with a system of cables. The drone flies up to her, clings to the cable and goes down to the ground. Thus, for launching and receiving the ScanEagle device, only a small platform is needed, free from any structures.

A gyro-stabilized platform for optical-electronic systems has been installed in the forward fuselage of the ScanEagle UAV. All modifications of this drone are equipped with a video camera and a thermal imager with a data transmission system to the control panel. In the course of creating new modifications, the device receives more advanced elements of an optical-electronic complex with improved characteristics.

As of the middle of the last decade, when the Boeing Insitu ScanEagle UAV was put into service, one complex cost about 3 million US dollars. The structure of one complex consists of four unmanned aerial vehicles with cameras and thermal imagers installed on them, a single control station, a video signal handling system, a pneumatic catapult and SkyHook hardware. Elements of the complex can be installed and transported on cars, armored vehicles, ships or boats. Depending on the specific basic equipment, some means of the UAV complex undergo small changes. For example, the land version of the catapult and the SkyHook system is equipped with a wheeled chassis, and on boats or ships all the elements of the complex are permanently installed.

The first flight of the drone ScanEagle took place in the middle of 2002 year. Two years later, several complexes were transferred to the troops for testing in a real armed conflict. Operation in Iraq allowed to show the advantages of the new UAV, as well as to identify the existing shortcomings. After some improvements in the 2005, ScanEagle was adopted by the US Navy. Following the naval forces, the operation of such UAVs began the Marine Corps and the Air Force. In addition, over the next few years, ScanEagle UAVs were acquired by several foreign countries. They are currently used in the armies of Australia, Great Britain, Canada, Colombia, the Netherlands and other countries.

At the end of last year, Iranian media published news, according to which Iranian air defense destroyed the US ScanEagle UAV, which invaded the airspace of the country. A little later, two more such apparatus were captured as trophies. The Pentagon has denied information about the loss of its UAVs, and a few months after this incident, it turned out that Iran had captured the vehicles of the Canadian armed forces. According to some reports, the Iranian defense industry copied the American UAV and started mass production of its own version of ScanEagle. 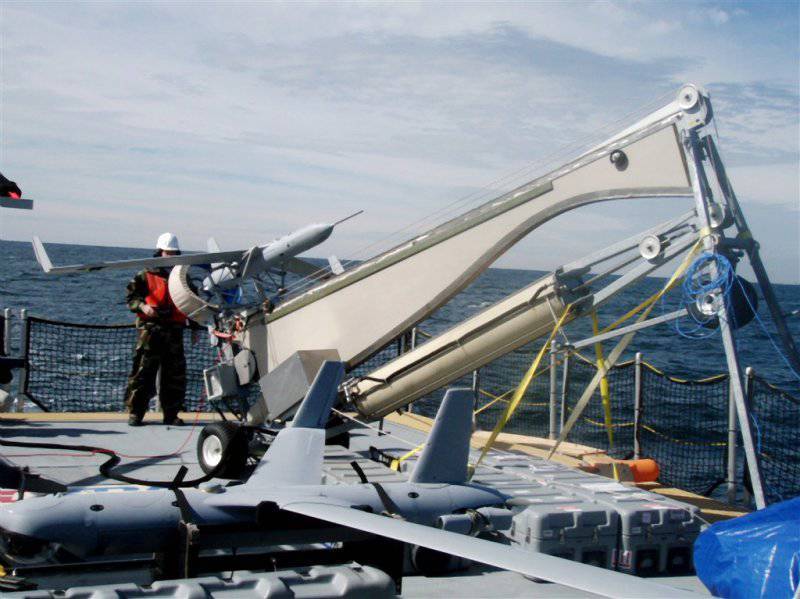 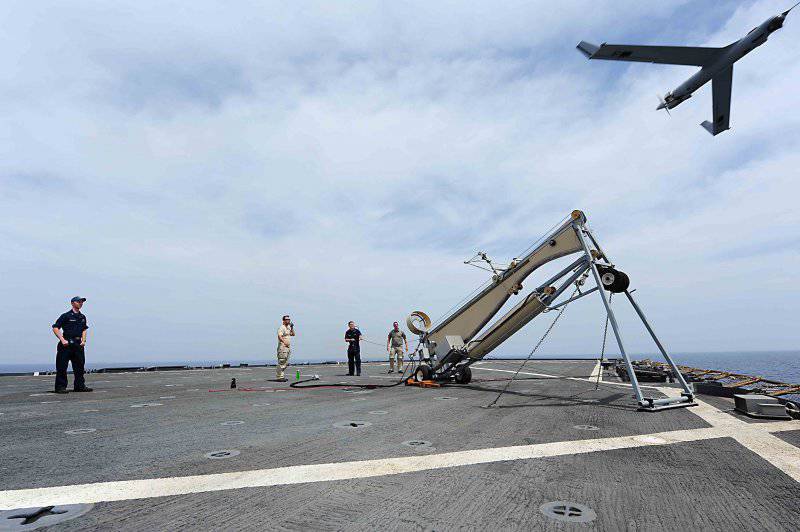 In July this year, it was announced that the Boeing Insitu ScanEagle UAV received a certificate from the Federal Civil Administration aviation USA. With this document, the drone can be used for commercial purposes. In the near future, several ScanEagle complexes will be delivered to Alaska, where they will have to deal with ice reconnaissance, monitoring weather conditions, etc. It is assumed that unmanned aerial vehicles will be able to take on part of the responsibilities of manned aircraft. This will significantly reduce the cost of some of the work now performed exclusively by airplanes.

Operation of the UAV ScanEagle in the army continues. Over the past eight years, the Navy, Air Force and ILC have managed to assess the benefits of these devices, and are not going to abandon them. So, as of the middle of 2011, all released ScanEagle made a total of 56 thousand flights with a total duration of 500 thousand hours. Due to resource development, breakdowns, etc. Features of the operation This means that ScanEagle will remain in service at least until 2017-18's.

Ctrl Enter
Noticed oshЫbku Highlight text and press. Ctrl + Enter
We are
UAVs in the post-Afghan era (part 3 of 3)Unmanned aerial vehicle Boeing Insitu RQ-21A Blackjack
2 comments
Information
Dear reader, to leave comments on the publication, you must to register.