“Feeling” of the Russian Arctic

26 September 2013
143
In the administrative center of the Yamalo-Nenets Autonomous District - in the 47-thousandth of Salekhard - the next (third in a row) International Arctic Forum is open. Its name is "The Arctic - the territory of dialogue". The forum is held under the auspices of the Russian Geographical Society (RGO), and is very representative. This time more than five hundred participants from various Russian regions, as well as from foreign countries arrived at Salekhard. Among the foreign guests are leaders of several states and international organizations: Olalavyur Ragnar Grimsson - the head of Iceland, Sauli Niinistö - President of Finland, high-ranking officials from the Arctic Council, including Patrick Borby.


The forum’s meeting was attended by Russian President Vladimir Putin and the head of the Ministry of Defense (concurrently the President of the Russian Geographical Society) Sergei Shoigu.

The main circle of topics discussed at the forum included: environmental safety issues in the Arctic region, geological exploration, intensification of work on the study of climate change. Particular attention was paid to the need to find a balance between interests in the development of huge mineral reserves in the Arctic and the preservation of the flora and fauna of the region.

The III International Arctic Forum is taking place far from a cloudless background. Two, let's say, events contribute to a certain dissonance in its holding:

the first is an attempt by Greenpeace activists to land on the Prirazlomnaya drilling platform, the second is protracted military exercises of air fleets and ground support units of the United States, Great Britain, Norway, Finland and Sweden. It is noteworthy that Finnish Lapland was chosen as the main base for the exercise, in close proximity to the borders with Russia. 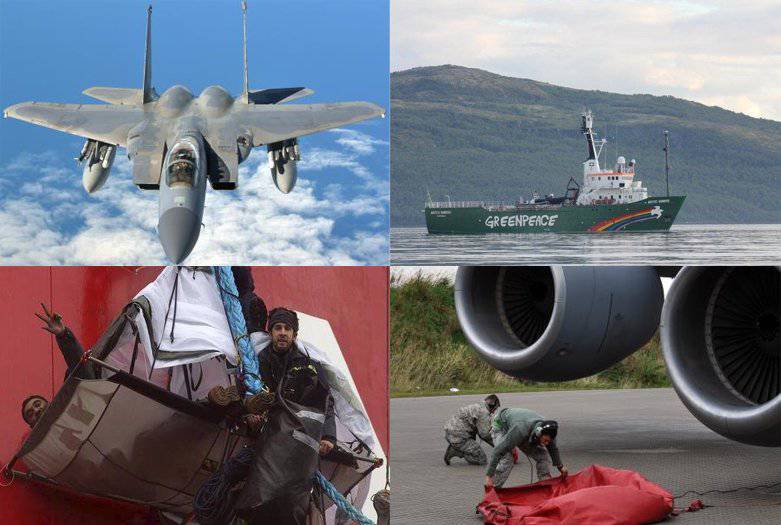 If the actual simultaneity of all the listed events is a coincidence, then the coincidence is simply unique. By the way, Vladimir Putin was asked to comment on the events related to the arrest of the crew of the icebreaker “Arctic Sunrise” by Russian border guards, using special equipment, to seriously and permanently settle on the Russian drilling platform in order to stop hydrocarbon production.

Putin replied that he did not know the details, but he is not ready to call Greenpeace activists pirates. According to Putin, the Russian border guards still acted within the framework of the law, and, delaying the crew of the "green icebreaker" that violates international norms, quote:
did not know who was trying to seize the platform under the guise of Greenpeace. Especially against the background of the bloody events that took place in Kenya, anything could have happened.

The Russian president noted that if Greenpeace activists really wanted to indicate the presence of environmental problems at Prirazlomnaya, then no one prevented them from identifying these very problems during the International Forum held in Salekhard:
I want to stress once again that we are determined to work with all our partners, with all environmental organizations. But we presume that this work will be built in a civilized way.

Recall that the detention and dispatch of Greenpeace activists to Murmansk (followed by "placement" in local SIZOs) took place after the motor boats were launched from the Arctic Sunrise icebreaker, attempting to deliver a certain capsule of long-term autonomous residence to the drilling platform. In this capsule, activists were supposed to be accommodated on the rig and prevent oil extraction on the shelf of the Russian Federation. The platform staff, whose number, according to the latest data, is up to 200 people, tried to stop the “greens” climbing upward with the help of a water attack from the hoses. Two Greenpeace members were washed into the water, from where they were taken aboard by Russian border guards. Next is the “sunny” Murmansk, the accusation of piracy and violation of international shipping regulations, the SIZO ...

It is noteworthy that Greenpeace is not the first time trying to attack the Russian drilling platform. The first attack took place about a year ago. Then there were the same attempts to get on the "Prirazlomnaya", the same hoses, but in the end everything went without a detention center. This time, Greenpeace was decided not to give another chance, and they did everything under international law - they took the offenders as a “soft spot” so that, as they say, it was disreputable. How much will be "not guided" - time will tell.

And why did Greenpeace attract Prirazlomnaya? It turns out that the “green” accountants decided that oil production in these latitudes was unprofitable, and that drilling should be stopped. What, however, is the organization that cares about the profitability of Russian projects? At first, he considers other people's money, and only then suddenly he remembers that he needs to keep his brand - and declares a possible environmental threat. An interesting train of thought and events.

In this regard, the question arises: why did Greenpeace decide to attract world attention exclusively to the Russian drilling platform, but did not react at all, for example, to the American-British-Norwegian-other military exercises in the Arctic, which dragged on for more than a whole decade? Do the “Arctic Challenge” exercises using eight dozen NATO planes and the so-called “neutral” states of Northern Europe (Sweden, for example) do not cause damage to the Arctic? Do the British Typhoons or American flying Arctic Fox or Polar Bear tankers scare away? ..

And for whom, in general, did the “allies” decide to declare their “Arctic Challenge”, conducting combat training operations in close proximity to the exclusive economic zone of Russia? The question is rhetorical. At the same time, the same Swedes, who position themselves as adherents of neutrality, declare that the exercises are in no way connected with the demonstration of military power in relation to Russia: they say, we decided to lift eight dozen military airplanes to the air in order to look at the bird markets from above or lemmings with JAS-39 to take pictures.

If we touch the goal of the “Arctic Challenge” exercises, then officially they look like this:

promotion of military cooperation between Finland and the Scandinavian countries in the framework of NORDEFCO (defense cooperation of the northern countries);

Well, military cooperation is their business, let them cooperate with whom the soul asks. But here "stabilization" and "peace enforcement" is already interesting. Since when did the stability in the Arctic break down, and who needs to be appeased? Well, not Greenpeace icebreakers and lifeboats ... By the way, why not assume that the same “Arctic Sunrise” was also a participant in the exercise - in the order of not far-reaching ideas ... Let's just say it, feeling the situation, and this probing for “Arctic Sunrise” turned out painful.

It turns out that while in Salekhard they were preparing to carry out the “Arctic - the territory of dialogue”, somewhere “in the wild, wild West” they pondered the “Arctic Challenge” - one of the most large-scale exercises under the auspices of the United States this year. Some are trying to conduct an international Arctic dialogue, while others are more accustomed to monologues and challenges. With just the names of events, it is already possible to draw a definite conclusion about the geopolitical strategy of various states.

Ctrl Enter
Noticed oshЫbku Highlight text and press. Ctrl + Enter
We are
Results of the week. "So I have a shaggy heightened"Engineering Technologies-2012. The first days of the forum
Military Reviewin Yandex News
Military Reviewin Google News
143 comments
Information
Dear reader, to leave comments on the publication, you must sign in.