US intelligence agencies - the main producer of drugs in the world? 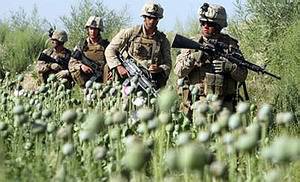 The power structures of the United States apparently have not changed at all, in their moral component, since the Vietnam War. But rather degraded even more, negative processes tend to develop.

Agence France-Presse reported that Argentine customs officers found a consignment on board the C-17 aircraft belonging to the US Air Force. weapons and drugs. “Materials not mentioned by the State Department were confiscated — from weapons to various drugs, including multiple doses of morphine,” the Argentine Foreign Ministry said.

The incident occurred last Thursday, but only 14 of February became aware of it. Apparently, the Argentine government was hoping for an apology from Washington, or some other thoughts they had, but there was no reaction from the White House. Then the case was announced to the public. Interestingly, the plane arrived to participate in the hostage rescue exercise.

Immediately I remember the American film "Air America" ​​1990, with Mel Gibson and Robert Downey Jr. in the lead roles. About the CIA's machinations of weapons and opium in Laos, with the assistance of local corrupt military.

Only after publicity, the US authorities responded by stating that the aircraft had: ordinary equipment and materials for conducting joint exercises with the Argentine federal police, including batteries, drugs and communications. “We are surprised and alarmed by the actions of the Argentine authorities,” said State Department spokesman Philip Crowley, adding that the inspection of the American aircraft was not coordinated with the American side. “We call on the government of Argentina to return our equipment,” he stressed. Whether the drugs found on board the aircraft were meant under the “equipment”, Crowley did not specify.

US intelligence services major in the drug market ?!

Historians are aware of the fact that in the past the royal family of Great Britain was the main "owner" in the drug market. About t. N. “Opium wars” were heard by many - then London made it possible to open the internal markets of China for selling opium by force of arms. Then a significant part of the population of Chinese civilization was put on drugs. China gave opium silver, losing millions of lives.

The USA became the heirs of the Anglo-Saxon policy. Dozens of US military bases scattered around the world are the perfect cover for drug trafficking. Naturally, most of the US military does not know, everything is done under the cover of secrecy. But, as is well known, “everything secret becomes apparent,” sooner or later.

Fire pours information that after the US and its NATO allies, Afghanistan were captured in 2001, Afghanistan became the main supplier of drugs in the world. Although before the arrival of the “liberators”, the Taliban movement (advocating strict adherence to the Koran) almost destroyed the opium poppy crops in the country.

State Secretary, Deputy Director of the Federal Drug Control Service (FSKN) of Russia Oleg Safonov reported that, according to the UN, since 2001, when the NATO operation “Enduring Freedom” was launched, the volume of drugs produced in Afghanistan grew in 44 times. At the same time, NATO (or rather its “owner” the White House) stubbornly refuses to support the Russian side’s proposals on the destruction of opium poppy fields, for example: with special herbicides. The fact that this position of the Alliance remains unchanged was confirmed in a recent interview with Interfax by the Russian ambassador in Kabul Andrei Avetisyan. According to him, NATO is “a firm stance against the destruction of poppy crops on the pretext that it can set up even more negatively the local population.”

Position of the Russian Federation

Russia presented the plan “Rainbow-2” to the world community, approved by the President of the Russian Federation, the proposals of the plan as a whole could fundamentally change the situation in Afghanistan if they were implemented. 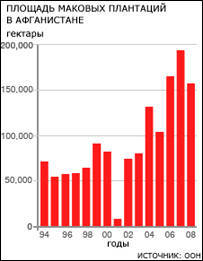 - raising, through the UN Security Council, the status of the problem of Afghan drug production to the level of threat to international peace and security;
- development and implementation of a program to boost the economy of Afghanistan through infrastructure development and the creation of at least 2 million jobs for Afghans;
- eradicating drug crops, including spraying with special preparations from airplanes;
- The introduction of sanctions against the owners of land that provide land for planting poppy;
- inclusion in the mandate of the International Security Force in Afghanistan competences and responsibilities for the destruction of drug plantations, ensuring operational cooperation, including intelligence sharing and coordinated training activities for Afghan special forces, to combat drug crops;
- The Russian Federation offers assistance by sending specialists from the Russian anti-drug agency.

According to experts of the Russian Federation - Afghan drug production can be eliminated completely.

But these plans risk remaining on paper if NATO and the United States continue their policies. Nor is it logical for the United States, the main drug dealer of the planet, under whose control most of Afghanistan is under control, to destroy drug production.