"Justice" at all costs 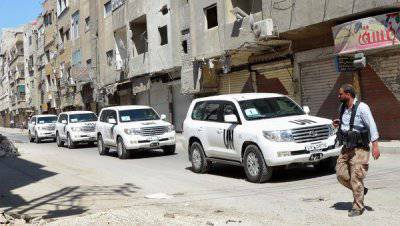 Recently, high-ranking American politicians are increasingly and more insistently calling for the start of a military operation against Syria. However, a large part of the world community recognizes that a forceful invasion is a dead-end method of resolving the current situation and can lead to both a humanitarian and a nuclear catastrophe.


Syrian authorities do not have nuclear weaponsHowever, the so-called “peaceful atom” is actively used in the country. These technologies are in demand in agriculture, industry and medicine. If American missiles hit such facilities, tens of square kilometers of the country's territory will become uninhabitable, thousands of people will receive a lethal dose of radiation. In addition, dozens of victims will be counted directly from the missile attacks themselves.

This and many other factors indicate that only United Nations peacekeeping is the only way to resolve the difficult situation in the Syrian Republic and restore peaceful life in the country. Most of the world leaders have already realized this, and therefore, at present, the Americans are left alone in their desire to strike at the army of Bashar al-Assad. Such permanent allies as Great Britain and France refused to support the United States. Washington cannot even count on the support of its own NATO bloc.

People still remember the tragedies that led to the US actions in Iraq, Libya, and the support of the opposition in Egypt. The once prosperous countries are on the verge of a humanitarian catastrophe. Continuous stream of messages about human victims.

Despite the fact that the US authorities insist on the guilt of Bashar al-Assad in the use of chemical weapons, which is the main pretext for overthrowing the legitimate president of the Syrian Republic disagreeable with the Americans, they have not presented any weighty evidence. However, the UN commission working at the site of the chemical attack has already found evidence that indicates the use of prohibited weapons by the opposition. A video was also made public showing how several armed militants charge a large-caliber mortar with special ammunition. The ammunition has the form of a hermetic blue tank with a detonator. The video shows how one of the militants, under the supervision of a specialist, twists a detonator into ammunition, after which the entire mortar crew hides in a shelter and carries out a shot.

Apparently, this is why the American authorities are trying to unleash an operation against the Syrian authorities as soon as possible. It is in their interest not to let UN specialists finish their work.

The need for a peaceful solution of the problem is recognized worldwide. The UN Secretary-General and the leaders of most of the countries in the organization insist that the parties sit down at the rehearsal table. “A political decision is the only way to stop the bloodshed in Syria,” said Ban Ki-moon.

In addition, even citizens of the United States understand the need for a diplomatic solution. A survey conducted by Reuters showed that 56 percent of Americans are against intervention in the civil war in Syria. Rallies against military operations were held on the streets of many American cities. However, Barack Obama and his administration continue to insist on the need to strike at Syrian territory, which directly contradicts the UN Charter, which states that any military operation other than self-defense is aggression.

In this situation, the main task of the world community is the preservation of peace and the prevention of arbitrariness on the part of the state, which places itself above others.

Ctrl Enter
Noticed oshЫbku Highlight text and press. Ctrl + Enter
We are
About Stalin and KhrushchevMilitary reform as an integral part of the security concept of the Russian Federation: Systematic dynamic assessment
Military Reviewin Yandex News
Military Reviewin Google News
46 comments
Information
Dear reader, to leave comments on the publication, you must to register.