25 September 2013
6
In the 1970s The American strategy was reoriented from the confrontation in European territory to local operations in various parts of the world. This situation raised the question of the need to adopt the lung rapid reaction forces. tankhaving mass and mobility like the Sheridan’s, and firepower - like the main battle tank M60A3. Among the first vehicles that met these requirements, the HSTV-L experimental tank was washed (High Survivability Test Vehicle - Lightweight - “experimental vehicle with high survivability on the battlefield and low weight”).

As a basis for the development of a light tank HSTV-L steel "Sheridan", which was armed with an ARES gun caliber 75 mm, and an experimental tank HIMAG having a mass of about 35 tons. However, this machine, developed by AAI Corporation (Aircraft Armament Industries, Maryland), was a new design. The tank had the original chassis, tower and hull. The chassis (on board) consisted of five support rollers of average diameter and three supporting rollers. The width of the track roller - 121,7 mm, diameter - 355 mm. Suspension - individual, torsion. The height of the case was reduced to the maximum. The driver and gunner were reclining in front of the hull (jobs to the left and right of the tank axis, respectively). The body in the area of ​​the engine compartment was raised. Also managed to significantly reduce the height of the single tower.

In front of the turret, an ARES automatic caliber 75 mm with an initial projectile speed of up to 3000 m / s was mounted. To the right of the gun, an 7,62-mm machine gun М240, paired with a gun, was installed, another machine gun М240 was equipped with a remote control and was placed on the turret openly near the tower hatch of the commander. The angle of vertical guidance of the instrument ranged from -17 to + 45 degrees. Automatic charging contained 20 shells. Ammunition includes anti-aircraft projectiles and sub-caliber armor-piercing projectiles with a detachable APFSDS pan. The turn of the tower was made at a speed of 57 degrees / s.

In the tower to the left of the gun was located the workplace of the tank commander. The HSTV-L tank was equipped for that time with the most modern control system. weapons. Its development was carried out by Texas Instruments. The gunner had a sight stabilized in two planes, with an integrated laser rangefinder, a television camera and a thermal imager. The optical head of the sight was located under the armored rooftop turret. The gunner's auxiliary sight was tightly tied to the gun. The commander had an independent optical panoramic sight, allowing him to search for targets and not be distracted by the solution of the task of hitting detected targets (this function was performed by the gunner). If the gun barrel tracked the position of the optical axis of the commander’s sight, its sight would “close” to the gun. The optical head of the sight was located in the center of the commander's hatch. 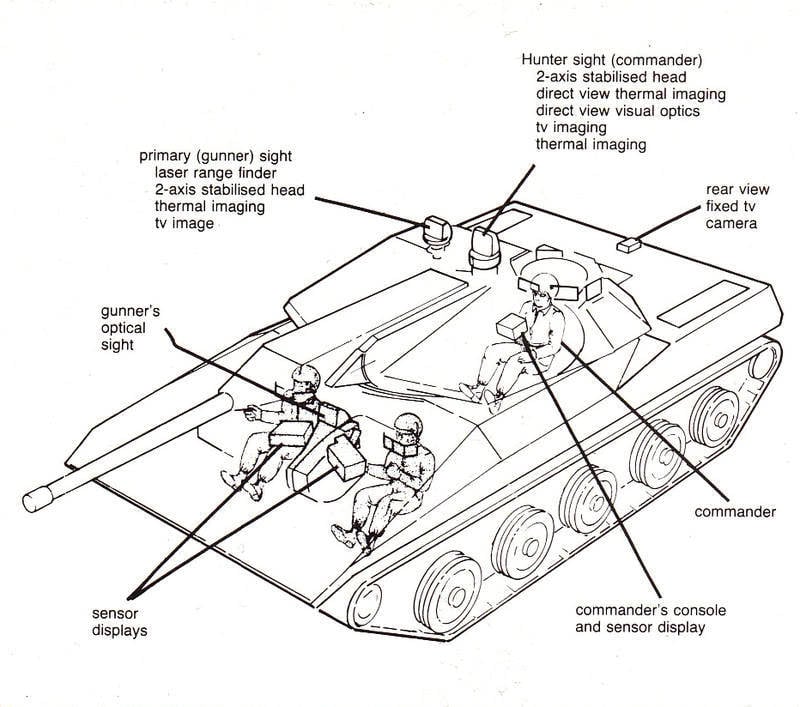 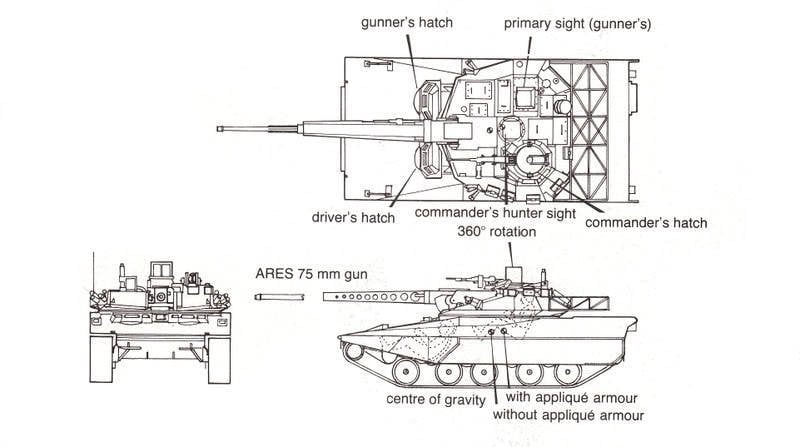 Also, eight fixed periscopic devices were mounted around the perimeter of the hatch, providing a total circular view. The gunner and the commander had night optics. The image from either of the two thermal imagers mounted on the tank could be displayed on displays that equipped all crew members' jobs. The data for firing was generated by a digital ballistic computer that automatically received data from sensors of atmospheric parameters and a laser rangefinder. Any member of the crew could fire from the main gun. The rear hemisphere view camera was mounted on the roof of the tower. The image from it was displayed on the display of any crew member.

The power plant of the tank HSTV-L 600-strong gas turbine engine "Avko 650" and hydromechanical transmission "Allison" ХХNUMX-300А with a differential turning mechanism and hydrovolume stepless drive control of rotation. The design made it possible to install the Avko 4 turbine of greater power on the tank. On an experimental sample of a light tank HSTV-L, it was possible to change the mass of the tank. The design of the chassis makes it possible to change its individual parameters to determine the required optimum performance. Suspension hydropneumatic individual. The caterpillar had a rubber hinge. The machine is equipped with a system of protection against the PPO and OMP and two radio stations.

The development of the HSTV-L light tank began in January 1979. The prototype was completed in September of the same year. Trials that began in the year 1982 continued for 10 years. They were held in Fort Louis, in the divisions of the 9 Infantry Division and in Fort Knox. 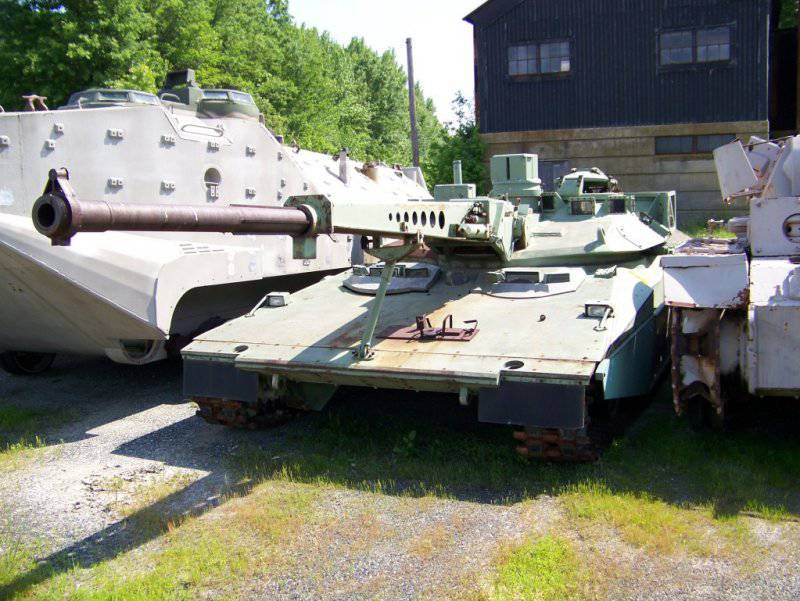 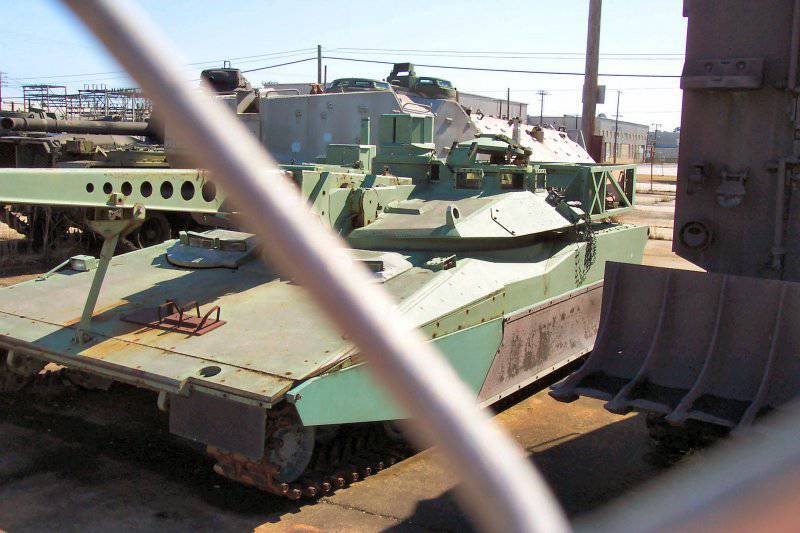 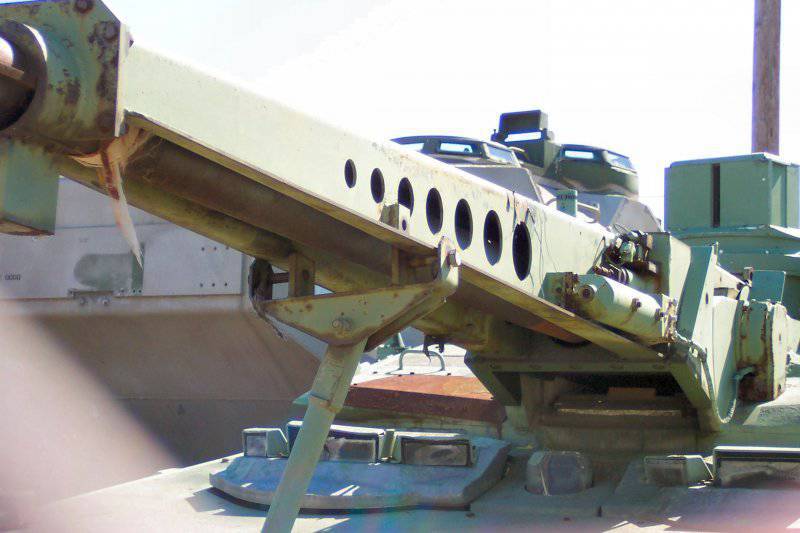 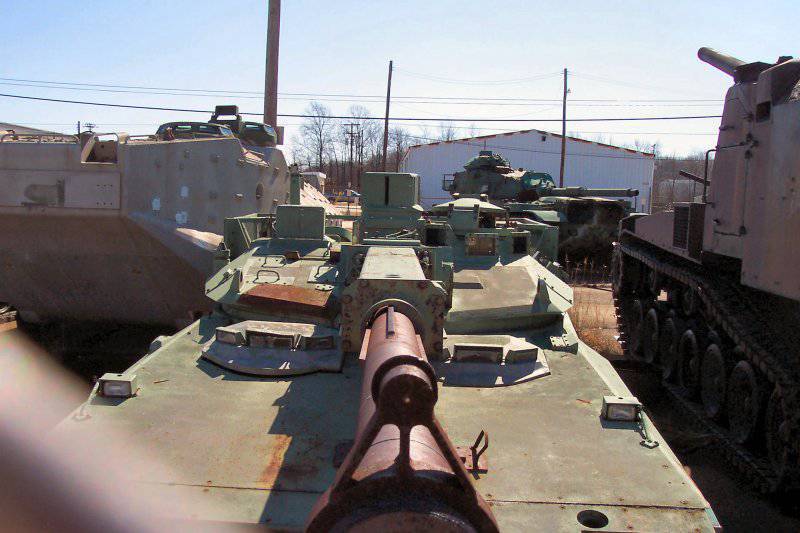 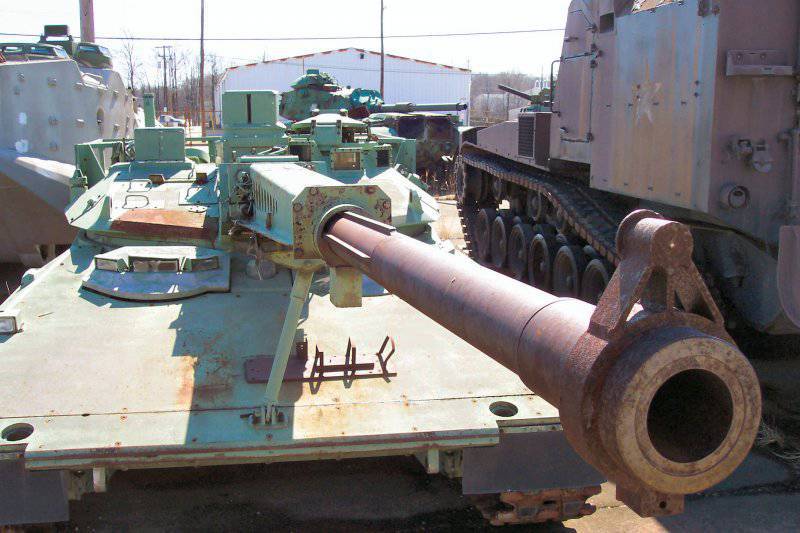 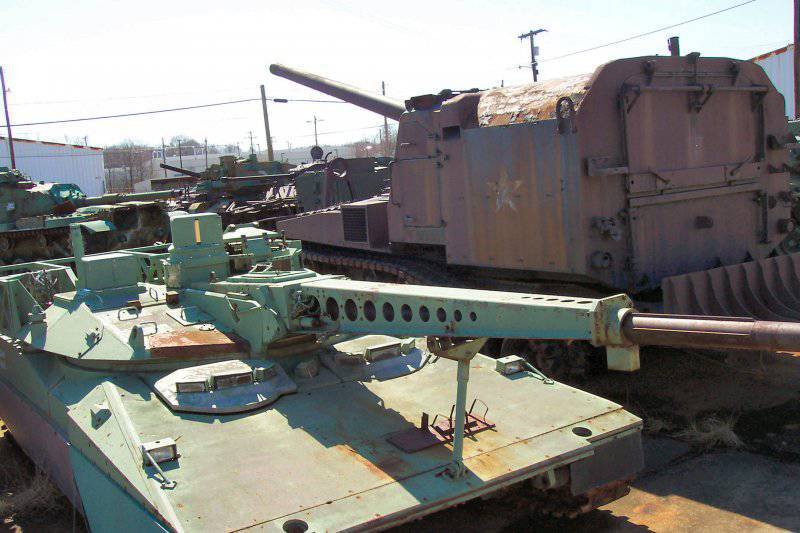 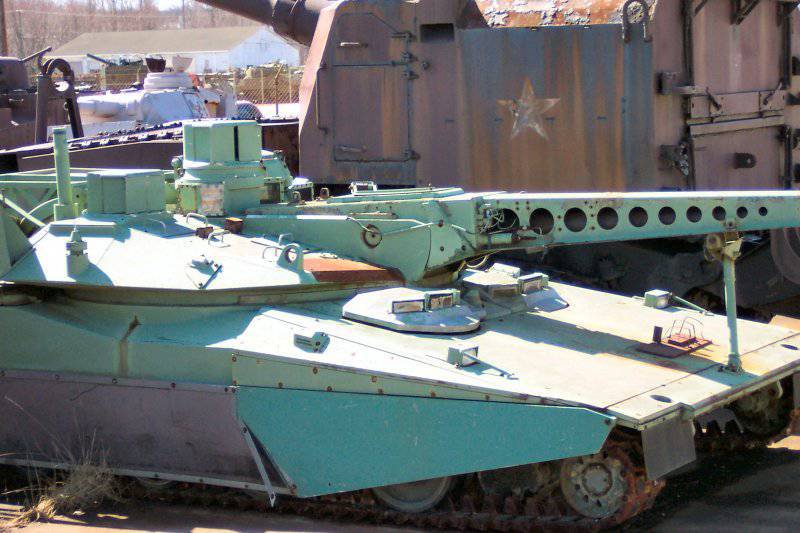 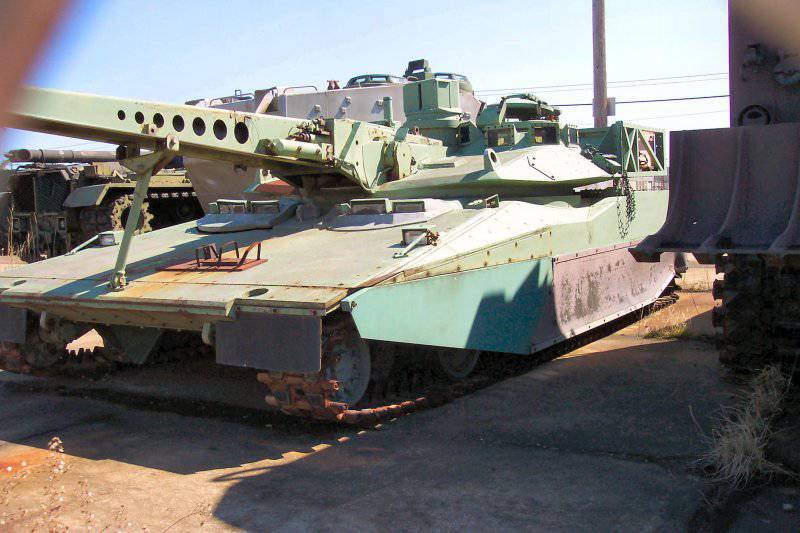 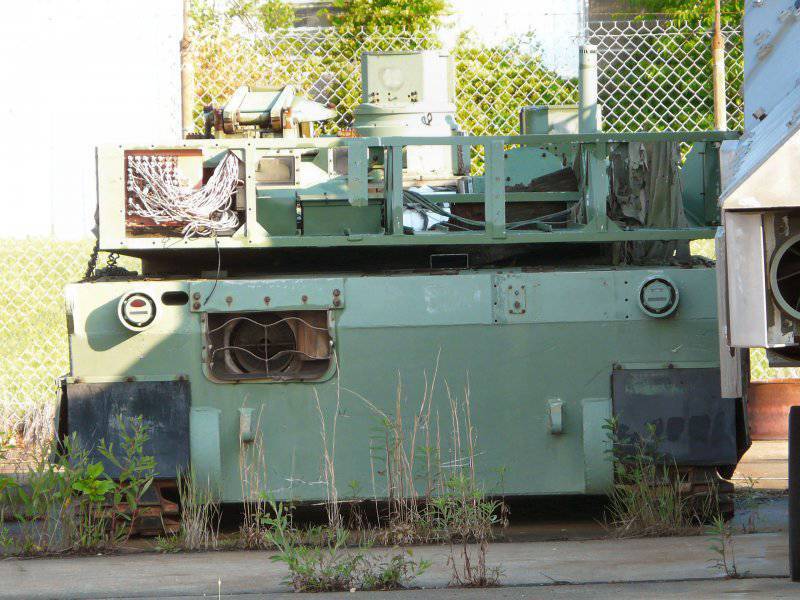 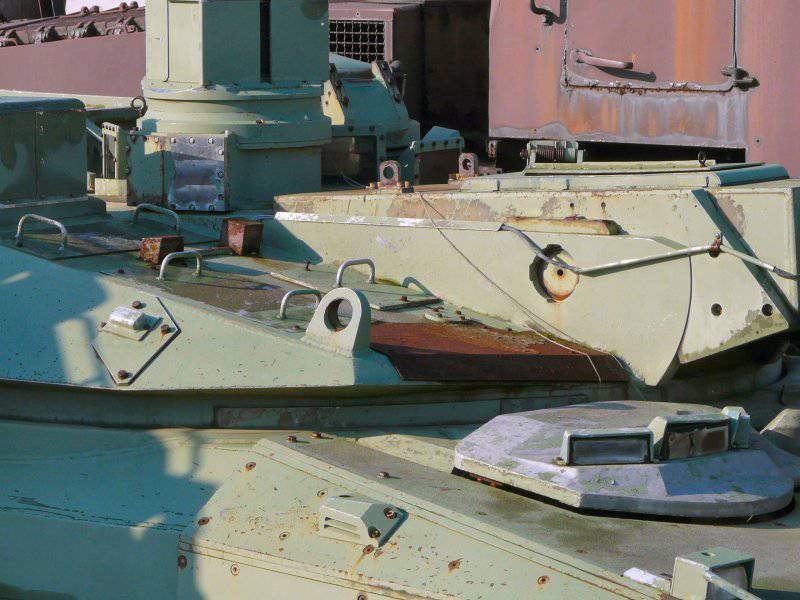