26 September 2013
29
Weapon (small, in particular) is a tool. And if the Kalashnikov assault rifle is a vivid example of a mass universal instrument, then the new large-caliber VKS sniper rifle, which will be discussed in this article, is a special tool with all its features, such as limited scope, high cost, exactingness to personnel qualifications, and the highest efficiency with proper use.


Small arms - one of the most widely replicated types of machines, often due to hundreds of thousands and even millions of manufactured products. And, of course, every developer, when creating a new design, hopes that his sample will be widely distributed and may even become popular. But there are exceptions. Speech about weapons of special purpose, which has never been and will not be massive. Here you can draw an analogy with industrial production, where most operations are performed by a universal tool. But for complex and demanding transitions, where special precision and / or cleanliness is required, special tools are used, designed and manufactured for a specific task.

The secrecy, suddenness and surgical accuracy of exposure to the “object” are the most important conditions for the success of any special operation. But in the samples of the recent past, a reduction in the unmasking factors of the shot — sound and a muzzle flame — has entailed a significant decrease in the effective firing range in comparison with the standard weaponry. A prerequisite for a low-noise shot is to reduce the initial velocity of the bullet to values ​​less than the speed of sound (as a rule, to 280 ... 300 m / s), which is necessary to eliminate the sound caused by a ballistic wave. At the same time the energy of the bullet fell sharply. The possibility of increasing the mass of the bullet to compensate for the loss of energy in standard types of cartridges is limited and does not give a noticeable effect. So the muzzle energy of a bullet of a domestic 7,62-mm intermediate cartridge with a reduced speed is about 27% of the muzzle energy standard, for the 5,45xXNNUMX mm cartridge the difference is even greater - no more than 39% of the 18H7 cartridge energy. This is less than the muzzle energy of a bullet fired from a PM pistol, and we are talking about the AK machine gun. Obviously, to ensure an acceptable range and the damaging effects of weapons with small unmasking factors, modifications of standard ammunition are not very suitable, and the use of special cartridges is required.

The VKS rifle is equipped with an auxiliary mechanical sight, when using a telescopic sight, the front sight and the diopter rear sight are folded

A notable step forward in this direction was the creation in the middle of the 1980-x in the Soviet Union 9-mm cartridge C ~.-5 7H8) based on the 7,62-mm cartridge case of the 1943 sample cartridge. The bullet of the SP-5 cartridge has an 16 g mass and initial velocity order 310 m / s, which allows for an effective firing range to 400 m and a relatively high stopping power. The level of muzzle energy of the bullet cartridge SP-5 almost 30% superior cartridge 7,62x39 mm cartridge US, while the weapon under 9X39 mm cartridges (currently developed several options) much lighter and more compact. The 9A-91 machine has a mass without cartridges of less than 2 kg and a length with a folded butt of 373 mm against 3,3 kg and 640 mm for AKMS (in both cases the length without a silencer). Naturally, the above comparison is valid only when using for low-noise firing cartridges for AK (AKM). Samples for 9x39 mm ammunition received recognition and relatively widespread, but the need for more powerful and long-range sniper weapons with small unmasking factors in counter-terrorist units remained.

The tactical and technical assignment for the development work under the code “Exhaust”, the result of which was to create a new sniper complex, including a rifle and ammunition and significantly exceeding the effective range of weapons and caliber 9X39 mm, was signed by the customer in the summer of 2001, the branch of the Tula Instrument Engineering Design Bureau - Central Design Research Bureau for Sports and Hunting of weapons (TsKIB COO). 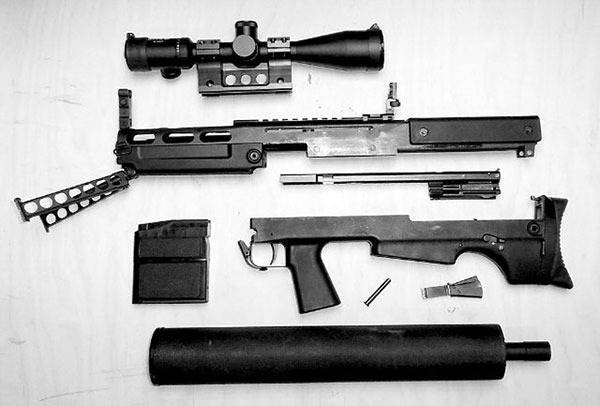 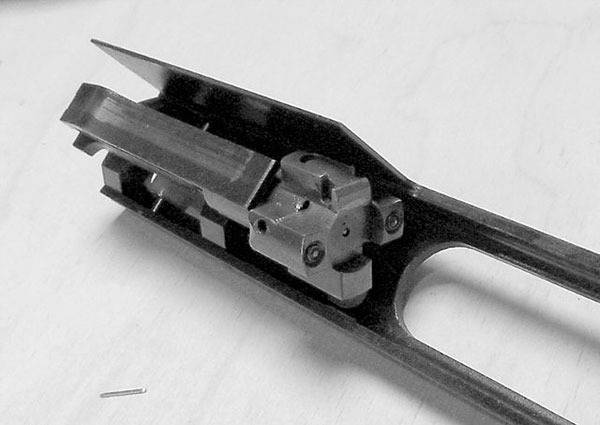 Vladimir Viktorovich Zlobin headed the team of designers who developed the new rifle and cartridges for it. In the second half of 2002, the prototype entered preliminary tests that ended in December of that year. The state tests were successfully completed in February 2004, and the 11 in May was a new) 12,7 mm VKS I large-caliber sniper rifle and cartridges for it were adopted by the Federal Security Service of the Russian Federation. The developed complex provided the 1,5 with a large effective range in comparison with the 9-mm BCC and VSK-94 sniper rifles in service with 7,62 and a significantly higher striking effect. Superiority over foreign models of low-noise sniper weapons (36 x 700 mm Grendel, modifications Remington XNUMX, SACO TRG) is even more significant.

The main tasks solved with the use of the sniper VKS complex are defeat of protected targets, including those using personal protection equipment of the IV-VI class, targets behind obstacles, shelters, automotive equipment, etc., at distances up to 600 and low noise level flameless shot. For shooting, three types of special cartridges (standard size 12,7x55 mm) with subsonic bullet speed, including armor-piercing (STS-130 UPPS index) are used, which can be used to break through the steel sheet with a thickness of 16 mm at a distance of at least 100 m. provided not only by the high energy of the bullet of this cartridge (the muzzle exceeds 3600 J), but also by the original design of the bullet.

Along with a long range of effective firing and a significant punching effect, such a characteristic as the stopping effect of a bullet is also extremely important for anti-terror units. The experience of domestic and foreign special forces during anti-terrorist operations has shown that the 5,45 ... 9 mm caliber weapons do not provide even with repeated defeat of the enemy to immediately deprive him of the ability to resist. In the context of countering terrorists, almost always operating under the guise of hostages or the civilian population, this task becomes paramount. The caliber of 12,7 mm bullet in combination with a considerable energy of the bullet provides a significant increase in its stopping effect. 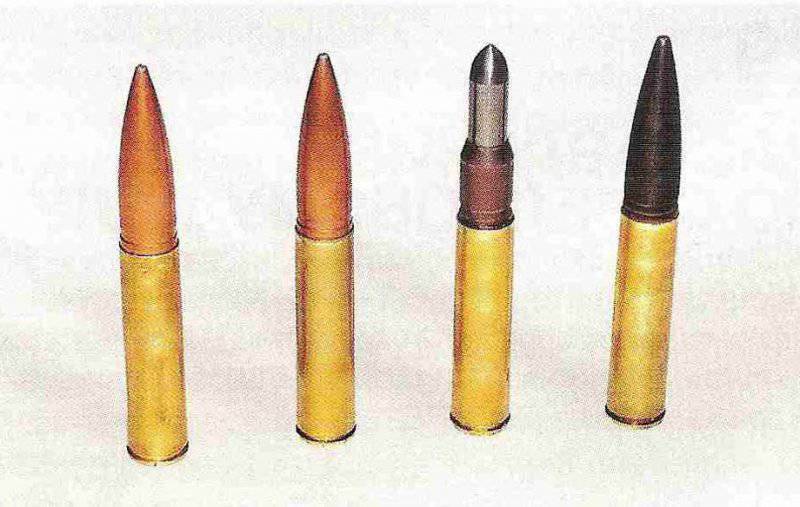 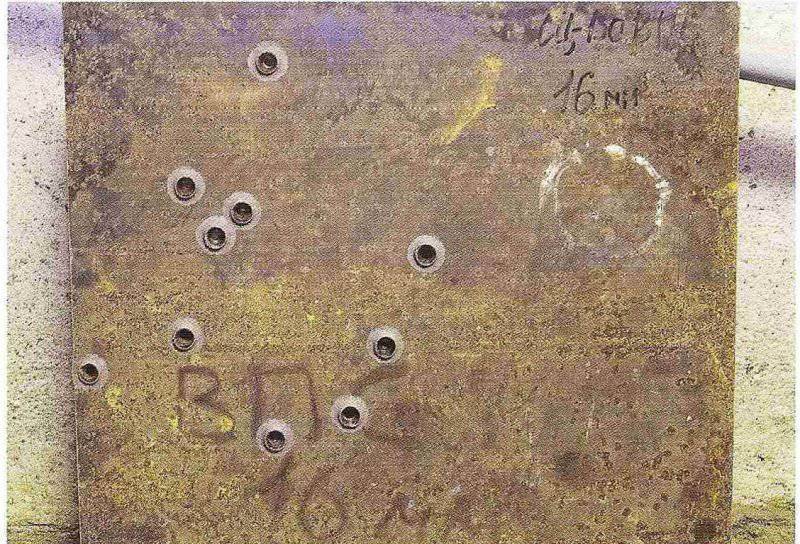 Through holes in steel sheet 16 mm thick after firing with SP-130 UPU chuck from 100 distance m. The scatter of holes is not evidence of low accuracy of shooting, for an objective assessment of the penetration action, the aiming point at each shot changes intentionally

The main characteristic of sniper weapons is the accuracy of shooting. The Tula special rifle VKS using cartridges SC-130 PT and SC-130 PT2 at least not inferior in accuracy to the SVD sniper rifle, which is a very high figure for a silent weapon.

The VKS rifle has a bullpup layout that made it possible to reduce the overall length of the weapon, a significant proportion of which is an impressive silencer, the dimensions of which are due to the high power of the ammunition used. The body of the muffler is made of a composite material that is not susceptible to corrosion and is lighter than steel. Polymeric materials are widely used in the construction, of which the forend, a magazine with a magazine receiver and a fire control handle are also made.

Manual reloading, the reloading handle located on the right side of the rifle moves progressively, which is more ergonomic than the control of the traditional "bolt" bolt. On the handle, connected with the slide frame, there is a lever for preliminary moving and a handle safety device, which excludes the spontaneous opening of the shutter. Locking the barrel is made by turning the bolt on the four symmetrically located combat stop the barrel, trigger mechanism trigger type.

Five cartridges are placed in a plastic single-row magazine, the sleeve is reflected to the right.

The control fuse box is located on the left. The rifle has a folding bipod, which when folded in its entirety is placed in the forearm. The bipod design allows you to adjust the height of the line of fire when shooting. The height of the overlay of the butt and the position of the butt plate are also regulated. The main sight is an optical one, for installation of which a universal mounting bar at the top of the receiver serves. Auxiliary sight - mechanical, diopter type, front sight and rear sight of which are folding. 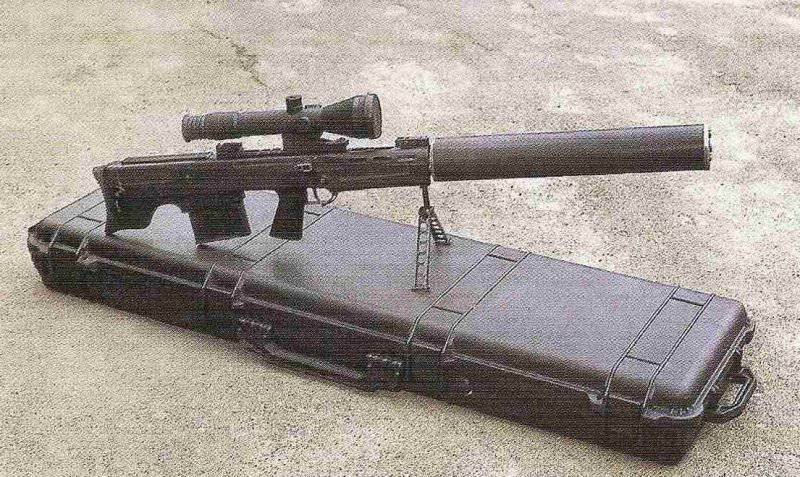 For transportation the VKS rifle is placed in a hard plastic case. 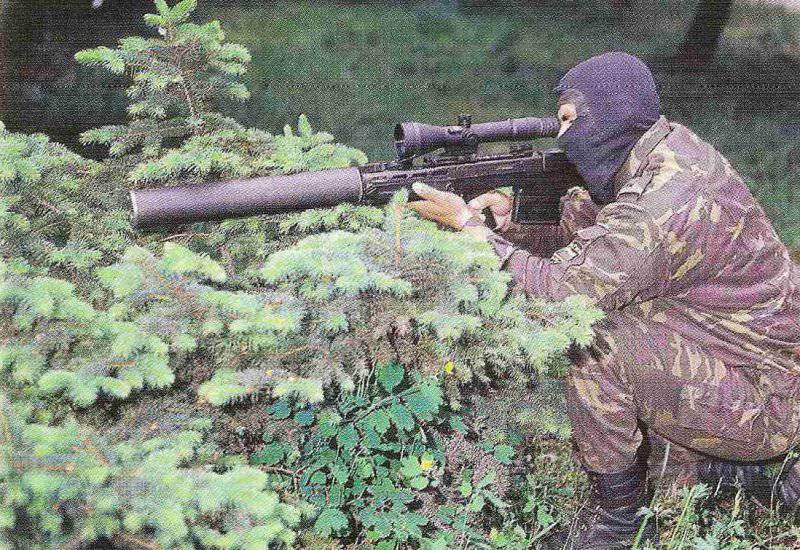 The main tactical and technical characteristics of the 12,7-mm sniper rifle VKS 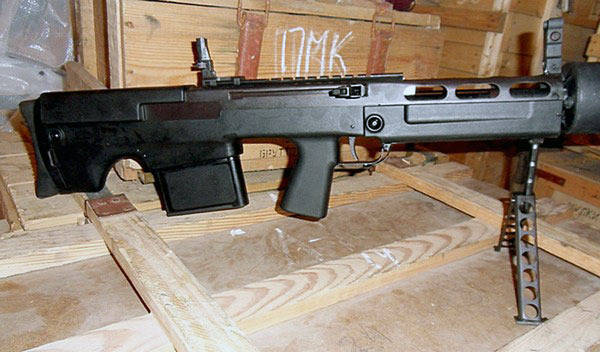 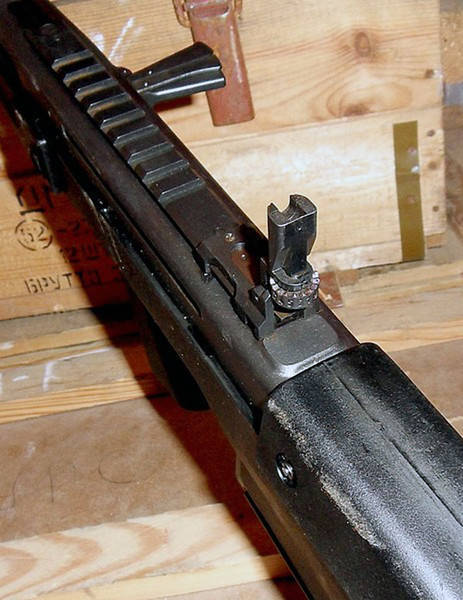 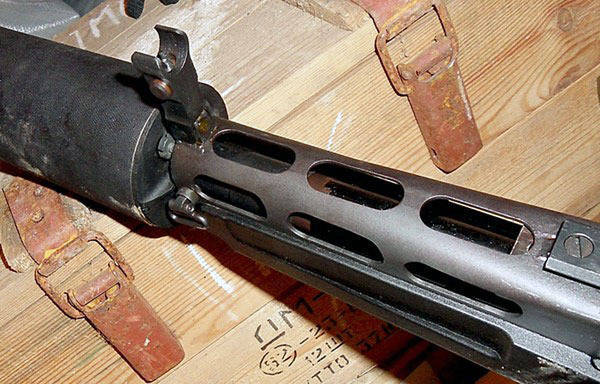 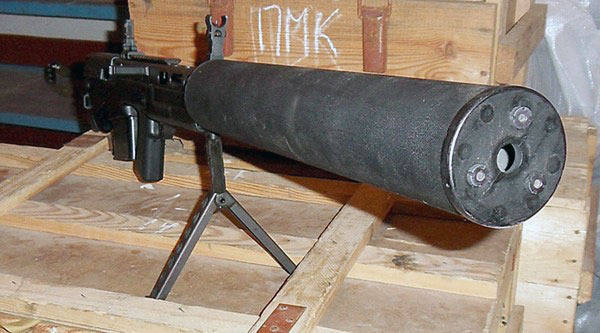 Ctrl Enter
Noticed a mistake Highlight text and press. Ctrl + Enter
We are
Dragunov sniper rifleLarge-caliber sniper rifle OSV-96
29 comments
Information
Dear reader, to leave comments on the publication, you must to register.