"Tatars must understand that they will be in a sectarian trap" 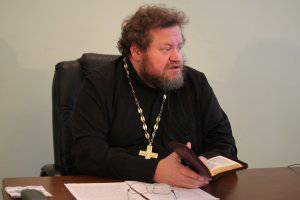 Archpriest Oleg Stenyaev is convinced that separatist sentiments in Tatarstan can only lead to the loss of sovereignty and Wahhabism ...


As reported, under the lulling of the federal center, the talk of “secularism” and the revival of “traditional moral values” in Tatarstan actually gives green light to the process of “hijabization” and the Islamization of public schools. In addition, the “Concept of the state national policy of the Republic of Tatarstan” signed by President of Tatarstan Rustam Minnikhanov, which emphasizes the need to “position” the republic as an “ethnocultural center”, is puzzling. At the same time about the "non-titular" population - and this is every second in the republic - the document says in passing.

In this regard, the chairman of the Council of Regions of the National Democratic Party (NDP) Rostislav Antonov believes that “the Kazan Kremlin sees the future of the republic as a national state, albeit as part of Russia. Consequently, the Russians of Tatarstan, as well as other "non-title" peoples, can only rely on themselves. "

We asked the well-known priest, the head of the Center for the rehabilitation of victims of non-traditional religions to them to comment on this situation. A.C. Khomyakova, Archpriest Oleg Stenyaev.

The problem with Tatarstan is that this is being done on the wave of Tatar nationalism. But Tatars must understand that if they culturally and politically find themselves outside of Russia, they will lose their national sovereignty, because they will be swallowed up by crowds of Arab sectarians who don’t recognize the very concept of a nation. The sectarian, Wahhabi mentality will prevail in Tatar society, it will be a blow to Tatar culture and tradition. This is indicated by the Muslims of Tatarstan themselves.

The movement of Wahhabism is young for Islam, it originated in the XVIII century, inspired by the British special services. This movement does not know of such a thing as respect for the elders, respect for elders, respect for national customs. They neglect all of this. Wahhabism is an example of Islamic puritanism. Tatar intelligentsia, which seeks self-identification, can expect a national tragedy. Any departure from Russia will create a number of problems for these people. If they find themselves in the legislative space, where only one of the trends in Islam will be defended, not the most dominant, then this will be a regression.

The ideas of Wahhabism have nothing in common with ancient Islam. It is the same as comparing ancient Orthodoxy with some Jehovism or the “White Brotherhood” movement. Tatars must understand that they will find themselves in a sectarian trap, from which they themselves will not be selected. Those who are lobbying for nationalist laws in Tatarstan will attack this rake, which they themselves have laid out against themselves.

Ctrl Enter
Noticed oshЫbku Highlight text and press. Ctrl + Enter
We are
Western countries' interest in the Islamic factor in post-Soviet TatarstanForeign religious influence on the Muslims of Tatarstan in the post-Soviet period
Military Reviewin Yandex News
Military Reviewin Google News
76 comments
Information
Dear reader, to leave comments on the publication, you must sign in.