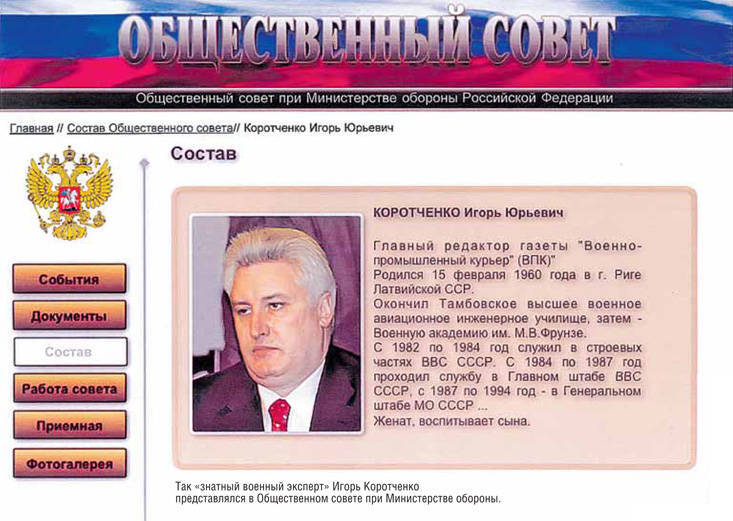 It remains to be clarified why he served in officer positions for only twelve years and was suddenly dismissed.

In 1982 – 1985, Igor Korotchenko served in the Air Force repair shop in the village of Velyaminovo, Moscow Region (his years in various positions, by the way, do not quite coincide with his official biography). In Igor Korotchenko's own stories, this small repair shop expands to the size of a large aircraft repair plant, and his insignificant position (primary officer, it should be noted) goes to the head of the leading department of this plant.

Then (1985 – 1989) Igor Korotchenko served at the Complex Technical Control Node, 406-laboratory of the Air Force General Staff. It sounds solid, but UKKTK is a very small unit responsible for the security of communications. Of course, in this military unit, the post of Igor Korotchenko was by no means the head of the knot.

The first significant increase occurred in 1989 year - Korotchenko was appointed head of the 1 group of the 992 group of the General Technical Monitoring Center (it’s possible that one or two military personnel were under his command at that time). In this position, Igor Korotchenko remained until the 1991 year.

In 1991, he was moved to the position of head of the technical control group. At the zenith of his officer career, Korotchenko sat in his headphones and listened to what others were saying on the phone.

In 1994, the officer service of Igor Korotchenko suddenly ended. He was dismissed in the rank of lieutenant colonel under sub-paragraph 2 G of paragraph 2 of article 49 of the federal law "On Military Duty and Military Service." In 1994, this meant: "If a soldier has ceased to meet the requirements set for him by the Law." In other words, this is the most defamatory article, according to which an officer from the Armed Forces could be dismissed.

So actually looks like a track record "commentator on all issues." Platoon, company, battalion is not commanded. In the fighting did not participate. Orders and medals were not awarded. To study at the Academy of the Armed Forces did not go. 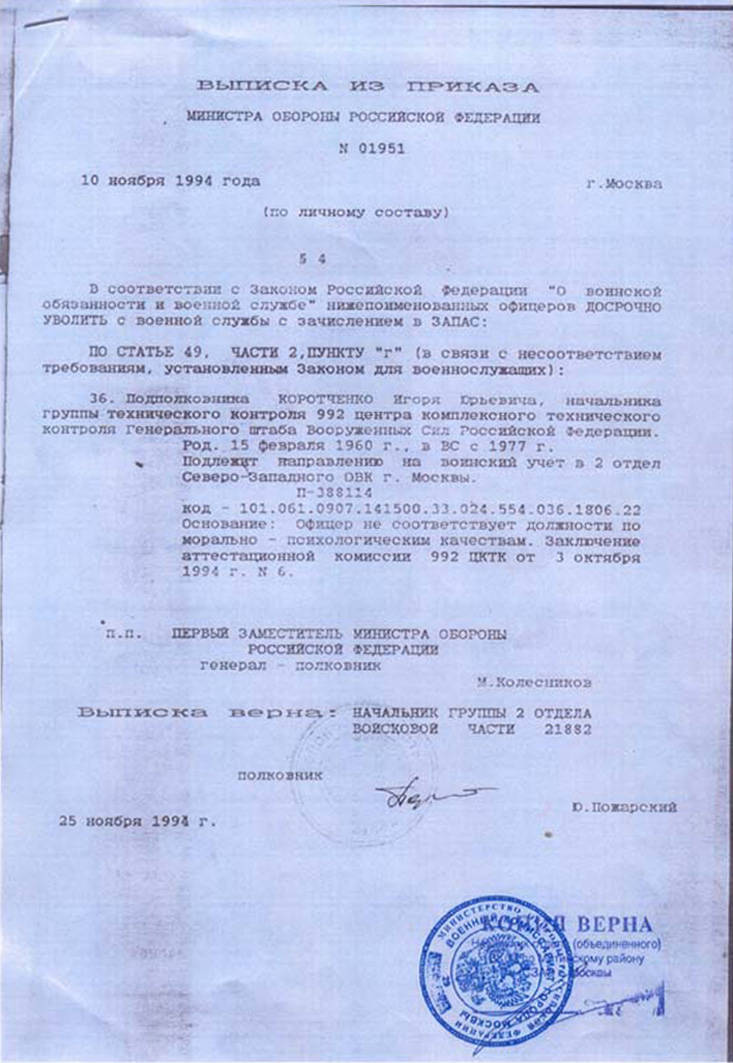 And in this way, the final of the officer service of “the most quoted military expert of Russia” looks like (the phrase was recorded with the words “double colonel”). By the way, someone who resorts to such services of a “colonel of state security” should probably still have under his hands Igor Korotchenko’s genuine record of service and a copy of the order for his dismissal from the Armed Forces. In order to be fully aware of the competence of the next comment received from the false graduate of the Military Academy. M. V. Frunze. 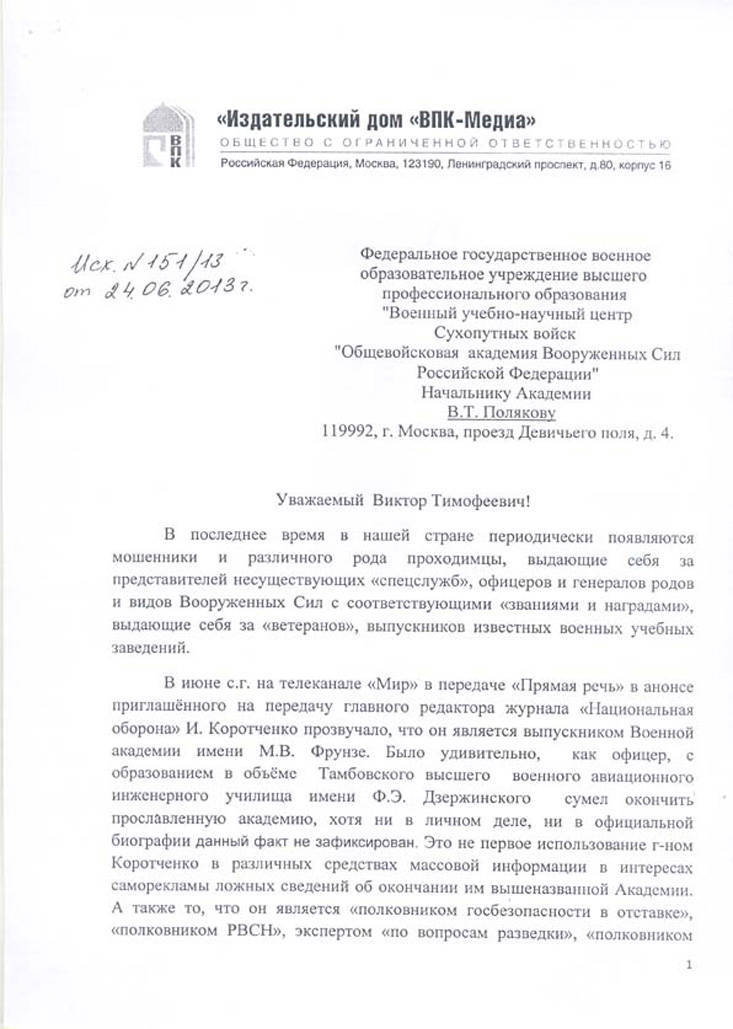 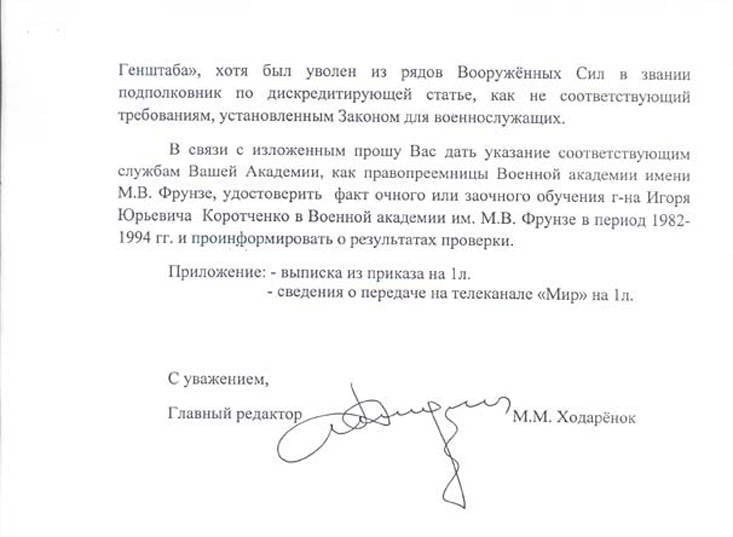 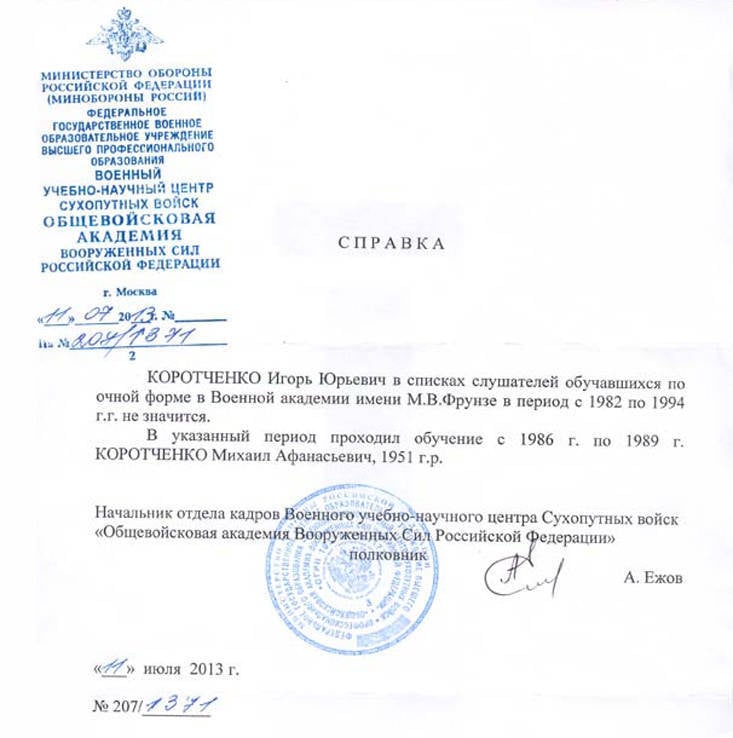 The case, of course, is unique. For a long time, the Public Council under the Ministry of Defense was headed by a reserve lieutenant colonel who was expelled from the ranks of the Armed Forces according to the most defamatory article. In the Ministry of Internal Affairs of Russia, thank God, they had somehow failed to think beforehand of putting the repeatedly convicted thief in law at the head of a similar body. And the discreditant and shirker Igor Korotchenko was engaged in "forming a positive image of the Armed Forces" (and, by the way, under the patronage of his guardians from the Ministry of Defense, he continues to do this at present). Truly, the pedophile was appointed head of the kindergarten. As for the "image formation", from this phrase alone, the thick smell of cutting budget funds just hits the nostrils.

However, in reality it’s scary after all, probably not this. High patrons of the "double colonel" and the false graduate of the Military Academy. M.V. Frunze from the military department is involved in the selection and promotion of personnel in the army and on navy. It’s just that the hair stands on end from the thought that candidates for the positions of commanders of formations and associations are selected in a similar way.

Ctrl Enter
Noticed oshЫbku Highlight text and press. Ctrl + Enter
We are
Remember brothersList of destroyed the largest and most high-tech enterprises
105 comments
Information
Dear reader, to leave comments on the publication, you must to register.