Syria and Lithuanian mercenaries: on the preparation of a new provocation 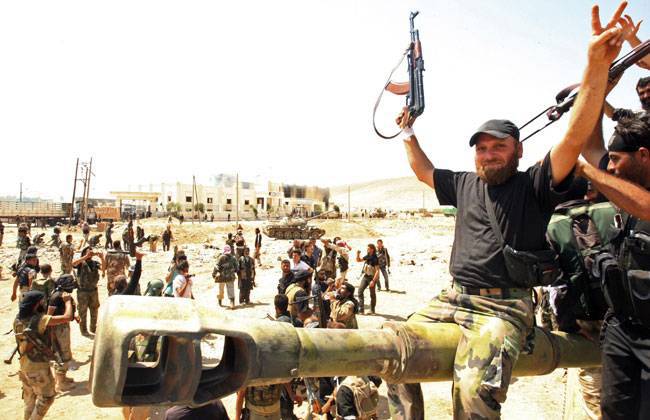 It is no secret that Lithuania sheltered the brave guys from NATO, whose task is to patrol the airspace of Lithuania, Latvia and Estonia. The welcoming Siauliais already the next day after the appearance of NATO members, apparently, beat the North Atlantic allies to the joy. The blood of the victims was shed on the Lithuanian land. So with good reason it can be argued that the integration of Lithuania into NATO is a friendship sealed with blood.


The incident with the beating of NATO members is not single. Similar incidents are repeated periodically, with all the representatives of the alliance from European countries also periodically changing on combat duty. Lithuanian aborigines more than once beat alliance members of the Belgian, Danish, British who complained to them ... They even wrote a joke about the reasons and the numerical ratio of those who beat and beat in Lithuania: “Why did they attack first?” The officer asked a dozen NATO soldiers, at night three Lithuanians beat up. The NATO members answer: "We thought there were only two of them, but then a third appeared suddenly."

According to the statement of Lithuanian Police Commissioner-General Vytautas Grigaravičius, the beating of the NATO military is “one of the consequences of drinking alcohol”, which by Western standards costs pennies in today's Lithuania. However, the problems of the guardians of the Baltic sky from NATO are not limited to beatings and an excess of cheap alcohol. In Lithuania, where, after the collapse of the USSR, the population is rapidly declining, but prostitution is a legal “business”, they also experience sharp discrimination from local “female priestesses of love”. The same police commissioner-general complained to journalists that the Lithuanian "geisha" were selling themselves to NATO members at more than three times too high tariffs. This, of course, is pure discrimination, taking into account that the list of services provided by prostitutes remains standard.

While NATO fighters are having fun with Lithuanian prostitutes (albeit at an inflated price), fellow “priestesses of love” are preparing to fight and are already fighting for the interests of the bloc far beyond the borders of their homeland. I remember the forgotten fact of stories of the ancient world: in ancient Rome, male mercenaries were equated with female prostitutes because they also traded their bodies.

Having become a member of NATO, Lithuania immediately began to increase the contingent of its troops abroad - Euro-Atlantic solidarity demanded. The then President of the country, V. Adamkus, who, incidentally, has dual citizenship of the United States and Lithuania, who loves NATO fighters as many as some compatriots, adopted a special resolution extending Lithuanian participation in "international operations" in the Persian Gulf, in the Balkans, and in Central and South Asia Say, it's better to beat the bad Muslims in their home than good NATO members at home.

For many years, hundreds of Lithuanian guys have been recruited for “peacekeeping operations” and die in hot spots like Iraq, Kosovo, Afghanistan. Currently in Lithuania, under the control of the Americans, there is a recruitment of mercenaries to be sent to Syria. Lithuanian Private Security Companies (PSCs) are directly recruiting, they have already proven themselves in recruiting personnel to assist in the conduct of NATO military exercises in Lithuania, as well as in the cases that the Americans turn in Afghanistan through Lithuania. At the same time, US private security companies are also involved; they are used to doing dirty work for special services in “hot spots” and during terrorist attacks on the territory of the United States.

High unemployment and a low standard of living in Lithuania, especially among the Russian population, create good prerequisites for recruiting. It is enough to mention that, even according to official, obviously underestimated data of the Department of Statistics of Lithuania, this level is such that over the past decade the population of the republic has decreased by more than 10% and continues to decline. Receiving the initial fee, many mercenaries from Lithuania, for some reason who believe that they will be able to survive in Syria, agree to take the rest of the money after the start of the contract.

By mid-September, about fifty Lithuanian mercenaries had been picked up, who were preparing to transfer small groups of charter flights from Lithuania to Turkey along with tourists. Preference is given to persons from 25 to 40 years who have served under contract service in the Western armies. Special forces, sappers, radio-electronic engineers, drivers of heavy trucks are in the greatest demand. That is, specialists suitable for use both in hostilities and in a post-conflict situation under the auspices of the occupation and puppet authorities (delivery of goods, protection of important objects and Western experts, assistance in the creation and preparation of law enforcement agencies, etc.).

It turns out that, on the one hand, Washington seems to be negotiating with Moscow regarding the Russian-American Framework Agreement on the Elimination of Chemical weapons Syria, which excludes military intervention, on the other hand, prepares "cannon fodder" for an armed invasion and service for the future occupation regime in a "liberated" country from the legal authorities.

Among those recruited in Lithuania are people who speak Russian fluently and have Russian citizenship along with Lithuanian citizenship ... It is very likely that after some time, the West will “discover” the sensational fact of the “participation of Russian volunteers” fighting on the side of Syrian rebels for human rights. At a minimum, this should darken the relations between Damascus and Moscow, and the maximum is to weaken the front of international support for Syria.

Even if the truth about the victims of the next upcoming provocation in Lithuania becomes the property of wide publicity, it can always be explained to the Lithuanian electorate that this is a fee for familiarizing with world civilization and human values. Or even simpler: recall that the death of one person is a tragedy, and the death of many is statistics.

Ctrl Enter
Noticed oshЫbku Highlight text and press. Ctrl + Enter
We are
What you didn't want to know about EnglandRevealed the secret of provocation in the American Boston
Military Reviewin Yandex News
Military Reviewin Google News
25 comments
Information
Dear reader, to leave comments on the publication, you must to register.