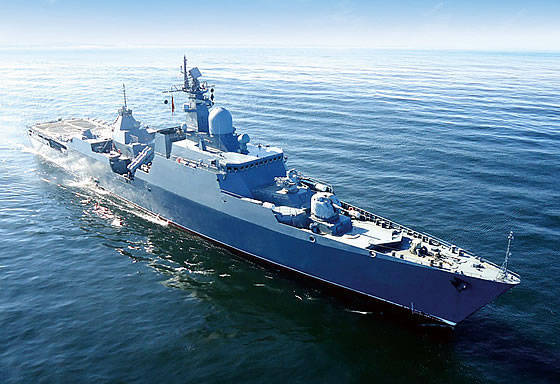 At JSC "Zelenodolsk plant them. AM Gorky "24 September is scheduled for the laying ceremony of two frigates" Cheetah-3.9 "for the Vietnamese Navy, the press service of the company reported.


The event will be attended by representatives of the Vietnamese Ministry of Defense, the Ministry of Industry and Trade of the Russian Federation, Rosoboronexport OJSC, ministries and departments of the Republic of Tatarstan, management of the Zelenodolsk municipal district, Ak Bars Holding Company OJSC, as well as representatives of the designer and counterpart organizations.

As part of the cardinal modernization of the country's naval forces, Vietnam became one of the largest customers of the Russian naval technology. The total value of the volume of orders for the supply of Russian Vietnamese WMT has become comparable with the current contracts implemented by the orders of the Indian Navy.

The largest program in the BMT segment is to supply Vietnam with six XELUM Kilo diesel-electric submarines.

Russia and Vietnam have signed a contract for the supply of six diesel submarines of the 636 "Kilo" project worth about 2 billion dollars at the end of 2009 of the year. The 636 diesel-electric submarines for the Vietnamese Navy will be equipped with the Club-S missile system.

Vietnam expects to receive a loan from Russia for the construction of not only a submarine-based base, but also for the purchase of various types of ships (including rescue ships, support vessels) and marine aircraft aviation.

It should be noted that the submarine forces and naval aviation will be new structures in the composition of the armed forces of Vietnam.

Along with the construction of the underwater fleet, Vietnam began the modernization of combat surface ships of the main class, as well as boats of various types and purposes. The lion's share of the major programs to modernize the Navy of Vietnam in the field of BNK OK and boats is also associated with Russia.

The implementation of the program with Vietnam for the supply of Svetlyak launches began in 2001. In the summer of 2002, two patrol boats from the 10412 project (an export version of the 10410 Svetlyak project) ordered by the Vietnamese Navy were launched at the Shipbuilding Company Almaz OJSC (St. Petersburg). Both boats were handed over to the customer in January 2003. The construction was carried out on the basis of a contract signed by the Vietnamese side with Rosoboronexport in November 2001.

At the same time, Vietnam expressed its intention to continue the construction program for the national naval boats of the Svetlyak type of boats (in general, then it was about building a series of patrol boats of this type from 10-12). Part of this program was developed in 2009 year. In the summer of 2009, two Russian shipyards (Shipbuilding company Almaz and the shipyard Eastern Shipyard) laid out a total of four patrol boats of the 10412 "Svetlyak" project (2 boats on each) by order of the Ministry of Defense of Vietnam.

The shipbuilding company "Almaz" delivered two boats to the customer in 2011 year.

In 2012, Viet Nam was supplied with two 10412 Svetlyak patrol boats, built by the Eastern Shipyard in Vladivostok.

The TFR of the 10412 project was developed at the St. Petersburg Central Marine Design Bureau Almaz. Boats have high seaworthiness, speed is about 30 knots. Crew - 28 people.

Svetlyak type boats are designed to protect the maritime border, coastal communications and the fight against poachers.

The second largest project in the boat segment is the program for the supply and licensed production of boats "Lightning". In 1990's 4 boats of the 1241RE "Molniya" project with the Termit rocket complex were delivered to Vietnam. In 1993, Vietnam purchased a license for the construction of 1241.8 "Lightning" missile boats with the Uran missile system. Delivery of technical, regulatory and technological documentation for the construction of these ships began in 2005 year. Since 2006, the process of preparing for production has begun. According to the contract signed in 2003, two boats of the 1241.8 "Lightning" project with the Uran missile complex were planned to be built in Russia and 10 boats under the Russian license in Vietnam. The first rocket boat “Lightning” of the 1241.8 project with the Uran-E missile strike complex was transferred to Vietnam in the 2007 year, the second - in the 2008 year. In 2010, with the laying of the first boat at the shipyard in Ho Chi Minh City, the realization of the licensed part of this construction contract from 6 to 10 of boats, calculated for the period up to 2016, began.

With the help of the Laguna marine simulator, delivered in 2002, the Vietnamese naval sailors worked on the management of four 2141Р project missile boats with the Termit rocket complex exported to this country in the 1990s.

Cooperation with Vietnam on naval simulators has been further developed. Vietnam expressed its intention to purchase an integrated simulator for three types of ships - the 1241Р project, the 1241.8 project and the Gepard frigates.

In September, Rosoboronexport signed a contract with the Vietnamese Navy for the modernization of the Laguna-2006РР simulator and the delivery of new simulators for the 1241РЭ and 1241 "Molniya" rocket boats - an electromechanical simulator weapons. Delivery was implemented in December 2007.

In the BNK OK segment, a large project is being implemented with Vietnam for the supply of frigates (the section on frigates is given in the statement of the press service of OAO Zelenodolsk Plant named after AM Gorky).

The frigates of the project "Cheetah-3.9" designed by JSC "Zelenodolsk PKB" and are designed to perform tasks such as the fight against air, underwater and surface enemy; coverage of the surface and underwater situation, setting active and passive interference; minefield setting; escorting and guarding convoys - in a conflict situation; guarding and patrolling the state border and economic zone; fighting smuggling, poaching and piracy; assistance to ships in distress; search and rescue of people at sea; flag demonstration - in peacetime.

The construction of the second pair of frigates "Cheetah-3.9" with anti-submarine armament for the Vietnamese Navy is a continuation of the work of JSC "AMGorky Zelenodolsk Plant" in the framework of international military-technical cooperation.

In 2005, a contract was signed with the Vietnamese Navy for the construction of the first pair of ships of the 11661 project “Cheetah-3.9”, and the Zelenodolsk Plant named after AM Gorky was elected the contractor. The plant successfully coped with all stages of construction, and 5 in March 2011, the national flag of Vietnam was raised on the first frigate at the naval base of Cam Ranh, the ship received the name "Din Tin Hoan" in honor of the first emperor of Vietnam, and 22 of August 2011 was held an official ceremony raising the national flag on the second frigate - "Li Tai To".

During the 15 months from the moment each ship arrived in Vietnam, a guarantee group consisting of specialists from the plant and its contractors performed work to maintain the combat readiness of the frigates, train personnel and eliminate the malfunctioning mechanisms and equipment arising during the operation.

From the moment of their launching until the signing of the final act on the completion of the guarantee works, the frigates were under the constant control of Russian specialists. Ships showed high seaworthiness in the South China Sea. In November, 2012, the plant fully completed the implementation of its warranty obligations in terms of construction and delivery of this pair of frigates to the Vietnamese side.

The positive results of the fulfillment of the first contract created prerequisites for the elaboration by the Ministry of Defense of the SRV of the issue of placing in the Russian Federation an order for the construction of the second pair of frigates Gepard-3.9. The intergovernmental contract for the supply of frigates was signed on October 17 2012 of the year, after which work was carried out on the coordination and preparation of the state contract for the supply of products for export under the current legislation of the Russian Federation.

The state contract between Rosoboronexport OJSC and Zelenodolsk Plant named after AM Gorky OJSC was signed on February 15 of the year.

The main differences of the new pair of frigates from the previous one are the presence of anti-submarine weapons and the use of a more modern power plant with improved characteristics.

Frigates "Cheetah-3.9" equipped with modern missile and artillery, aviation, anti-submarine and radio engineering weapons, as well as mine and anti-sabotage weapons, means of external and intra-ship communications, broadcasting, visual observation and audio communications.

The Russian side is negotiating with Vietnam on the supply of additional PBRK "Bastion" within the framework of the target state credit for the purchase of several types of weapons.

PBRK "Bastion" is able to protect the coastline with a length of more than 600 km from the landing operations of the enemy.

PBRK K-300P "Bastion-P" is one of the most modern in the world (developed by JSC MIC NPO Mashinostroeniya). It is a mobile missile system, armed with a unified supersonic anti-ship missile (PKR) K-310 "Yakhont". The range of the complex is up to 300 km.

An agreement is also being prepared with Vietnam to provide technical assistance in the production of Yakhont anti-ship missiles.

A delegation of Zvezdochka Ship Repair Center OJSC in April 2011 conducted negotiations with the command of the Vietnamese Navy and the leadership of the General Export-Import Company Van Xuan under the Ministry of Defense of Vietnam.

During the talks, the sides discussed issues of supplies of spare parts, service and modernization of the ships of the Navy of Vietnam, and also considered the prospects for the participation of the CS Zvezdochka in the reconstruction of the shipyard in the city of Camran.

Following the negotiations, the parties signed a protocol on the start of work on the supply of spare parts.

Currently, Vietnam, with the assistance of Russian developers, is implementing projects to build two types of ships for its Navy — the 54-meter patrol ships and the 71-meter landing craft.

The head patrol ship TT400TP (HQ-272) of the Vietnamese Navy was commissioned in January 2012. The armament and most of the ship’s equipment are Russian-made. The armament includes the X-NUMX-mm AK-76 artillery mount, located in the bow, the X-NUMX-mm AU AK-176 on the aft superstructure, several machine guns and, possibly, MANPADS.

Later, the second ship of the TT400TP class was commissioned, the construction of the third one is planned, possibly according to a modified project, using the experience gained and national technologies.

Vietnam also built the first landing ship with the assistance of Russian specialists. The HQ-571 landing ship "Truong Sa" was launched at the shipyard in Haiphong in October 2011 of the year and put into service in March 2012 of the year.

Ctrl Enter
Noticed oshЫbku Highlight text and press. Ctrl + Enter
We are
The action “Military service under the contract is your choice!” In Rostov-on-Don: future contract servicemen, exhibitions and “Russian Knights”At JSC "Zelenodolsk plant them. A.M. Gorky "will mark the fifth of a series of anti-diversion boats of the project 21980
54 comments
Information
Dear reader, to leave comments on the publication, you must to register.