CSTO summit in Sochi: around Syria, claims of Sargsyan and the southern borders

25 September 2013
266
During the week (23 of September) a summit of the CSTO member states (Collective Security Treaty Organization) was held in the Sochi sanatorium “Rus”. The presidents of Russia, Kyrgyzstan, Armenia, Belarus and Tajikistan gathered in Sochi to hold the summit. Kazakhstan this time was represented by Prime Minister Serik Akhmetov. At the Sochi summit, the presidency of this military-political alliance passed from Kyrgyzstan to Russia. Summing up his presidency in the CSTO, Kyrgyz President Almazbek Atambayev was extremely brief:

During the period of our chairmanship, good progress was achieved. Perhaps it just coincided. But I think we have worked well.

Vladimir Putin took over the baton from the Kyrgyz leader, who outlined several main directions for the work of the CSTO:

Strengthening cooperation to ensure security at the external borders of the CSTO.

Increasing the effectiveness of joint training of management bodies and formations of individual components of the Organization’s collective security system.

Systematic preparation of the Organization’s peacekeeping forces for participation in regional peacekeeping operations.

The need to effectively combat contemporary challenges, including the threat, as Putin put it, “transfusion” of terrorism from other countries (using the example of the terrorist attack in Kenya), as well as the threat of drug trafficking in the region (Afghan drug trafficking).

CSTO cooperation with other international organizations. 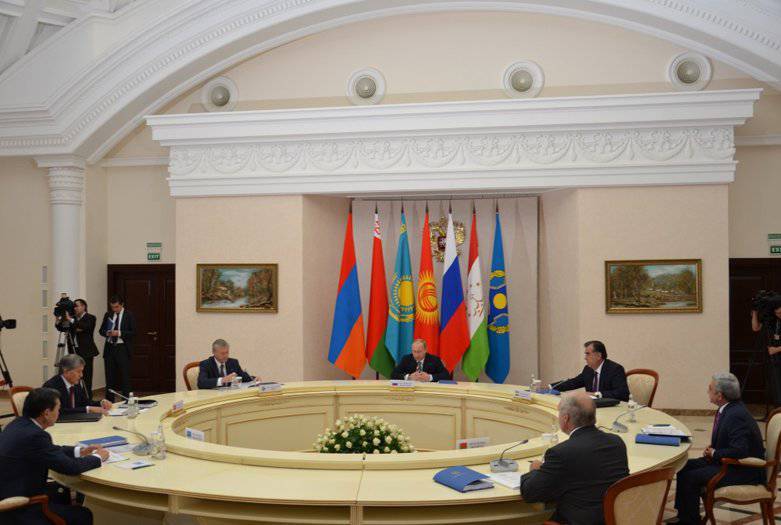 If we talk about the topics most discussed at the summit, we can highlight the topic of Syria, the topic of protecting the Tajik-Afghan border, as well as the issue related to certain claims of the Armenian President Serzh Sargsyan to some members of the Organization.

On the Syrian issue, those gathered were unanimous. All supported the Russian initiative to take the Syrian chemical weapon under international control, as everyone said, and for the need to solve the Syrian conflict exclusively through diplomacy. The heads of the CSTO member states prepared a joint statement calling on all the warring parties to sit down at the negotiating table and resolve the situation in the legal field.

The organization’s general secretary, Nikolai Bordyuzha, noted that the CSTO did not calculate the Organization’s options for action if the United States (or any other country) had struck Syria. They did not calculate it because the CSTO, as the representatives of the top of this military-political institute themselves say, is positioning itself as a regional structure that cares primarily about the security of those countries that are part of the CSTO.

It would seem that such a diplomatic language, by definition, cannot lead to internal friction within the Organization, but such friction has proved itself. The fact is that the President of Armenia Sargsyan, speaking at the Sochi summit, sharply criticized those states that are members of the CSTO and at the same time “on the side” accept negative resolutions in relation to other states of the Organization. Sargsyan touched upon this topic after three Central Asian members of the Collective Security Treaty Organization (Kyrgyzstan, Kazakhstan and Tajikistan) adopted a resolution some time ago at the site of the Islamic Cooperation Organization (OIC) saying that the conflict in Nagorno-Karabakh should be resolved exclusively in the plane of Azerbaijani territorial integrity. And although Sargsyan, as they say, did not poke anyone inside the CSTO, the representatives of Kyrgyzstan, Kazakhstan and Tajikistan clearly understood that this was a stone in their garden. Adoption, quote of the “anti-Armenian resolutions” the Armenian President considered a double game, from which the CSTO only loses.

But this statement of Sargsyan poses a very difficult question to the entire Organization. On the one hand, the CSTO seems to be doing well: joint training operations are conducted, the development of the management system and interstate cooperation is evident, a communique is adopted, signatures are put under single documents. But it is, let's say, the front side of the work. And there is also a rather unsightly wrong side, which, the aforementioned Serzh Sargsyan learned and demonstrated to all.

It turns out that Armenia in the organization goes with the promise: they say, if we are all members of the CSTO, then we must and support each other in a military and political manner; If we assume that someone does not support someone here, then the very existence of the Organization in this regard looks doubtful. At the same time, Sargsyan does not discover America: all this is spelled out in the Collective Security Treaty. A specific example is a couple of articles from this Treaty.

Art.2: The participating States will consult with each other on all important international security issues affecting their interests and coordinate positions on these issues.

In the event of a threat to the security, stability, territorial integrity and sovereignty of one or several participating States or a threat to international peace and security, the participating States immediately initiate a mechanism of joint consultation to coordinate their positions, develop and take measures to assist such States participants in order to eliminate the threat.

In the event of an aggression (an armed attack threatening security, stability, territorial integrity and sovereignty) to any of the participating States, all other participating States will, at the request of that participating State, immediately provide it with the necessary assistance, including military, as well as support from their disposal of funds in the exercise of the right to collective defense in accordance with Article 51 of the UN Charter.

States parties shall promptly notify the United Nations Security Council of the measures taken under this article. In implementing these measures, the participating States will adhere to the relevant provisions of the UN Charter.

It is obvious that Armenia more than anyone else (at least for now) is trying to squeeze the most out of the Treaty. Sargsyan’s words are not only a message to all the CSTO members to recall the letter of this Treaty itself, but also give head to the main goals of Armenia’s accession to the Organization. This goal is obvious - an attempt to solve the Karabakh issue at any suitable moment using the forces and means of the CSTO. But the fact is that today not all members of the Organization are ready to express solidarity with Yerevan. Supported by the official Bishkek, Astana and Dushanbe "anti-Armenian" resolution in the OIC - example number one. The words of the authorities of Kazakhstan that in the event of an escalation of the conflict in Nagorno-Karabakh (NKR), the Kazakh military will not take part in it both on the side of Armenia (member of the CSTO) and in the conflict in general. The main reason is that, according to official Astana, the current status of the Nagorno-Karabakh Republic does not threaten the security of Armenia.

Summarizing all the above, it turns out that the situation in the CSTO is not at all cloudless. If we return to the painful question of the NKR, then the participating countries clearly do not want to consult on them with each other, trying to get away from the unpleasant conversation. Sargsyan is trying with all his might to remind everyone of the second article of the Collective Security Treaty. For the time being, the Armenian president is simply patted on the shoulder, as if to say: Serge, old man, calm down, don't force up, there is no threat to your country, and therefore your appeals are deprived of soil. But how much the Armenian leader is ready to take this calm from other CSTO members is a separate question. If not ready, then the CSTO may well turn into a kind of mini-clone of NATO, where a number of states are trying to resolve their territorial and other issues solely through membership in the alliance. Of course, this would not be at all desirable, but it is impossible to dismiss the probability of becoming a clone completely.

During the summit, a problem was discussed that could be related to the upcoming withdrawal of the International Security Assistance Force contingent from Afghanistan. The main concern is not only an increase in the volume of drug flows along the northern route (through Tajikistan, Kyrgyzstan, Kazakhstan and Russia), but also a possible “transfusion” of extremist activity. In this regard, the CSTO addressed the issue of strengthening the Tajik-Afghan border with an additional military contingent. Not so long ago, by the way, the Russian ambassador to Afghanistan spoke about this. He said that Russia is considering the possibility of transferring its border guards to the Tajik-Afghan border.

Recall that the Russian border guards were on combat duty in the region until the 2005 year. Today, the border is guarded by Tajik border forces, exposing the same drug traffic is not the barrier that is expected of them. So far, no decision has been taken to send Russian and other border guards from the CSTO. The Secretary General of the Organization Bordyuzha noted that military personnel from Russia and other CSTO countries would not be sent to help Tajik border guards. But a decision was made on military-technical and financial assistance to the Tajik MF and other troops of the republic. For this, Russia is going to allocate more than 6 billion rubles (according to Kommersant). If this money is really allocated, it would be nice to establish control over their spending. True, not money can go to Tajikistan, but equipment, armament and ammunition for servicemen who are supposed to cover the borders of the CSTO from the south. In this case, I would like to hope that the allocated equipment and other things will not become easy prey for forces that can "spill over" into Tajikistan from Afghanistan after the recall from Barack Obama of his "falcons bearing freedom" from the latter.

Ctrl Enter
Noticed oshЫbku Highlight text and press. Ctrl + Enter
We are
Prospects, subtleties and difficulties of the formation of the SCO PRO, or when the observers are closer to the participantsDay of the Armenian army. How the armed forces of Armenia were formed and developed
Military Reviewin Yandex News
Military Reviewin Google News
266 comments
Information
Dear reader, to leave comments on the publication, you must sign in.