Three trips to the war 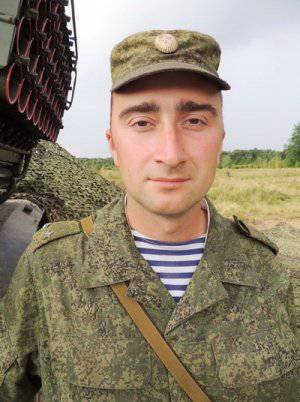 In the break between the “battles” we sit with Lieutenant Colonel Rublev in an improvised gazebo-smoking room, built by soldiers' hands in a shady grove, a few hundred meters from the firing positions. Last night, the positions were hot: the rocket artillery battery, participating in tactical exercises, led a concentrated fire on the conventional enemy. All calculations shot out successfully.


Today, the battery prepared for the arrival of high authorities. It was not so much a gloss — order here is already exemplary, as under the leadership of the acting deputy commander of the brigade — the commander of the jet division, Lieutenant Colonel Artyom Rublev, worked out various introductory exercises. The authorities did not appear, but the introductory were worked out in full.

- Here, one might say, romance, the soldiers are learning technology in the field, and this, I think, is correct. I often recall cadet years, as we thoroughly studied local wars and conflicts, the tactics of combat in the mountains and in the city. The school was a strong faculty. The head of the shooting and fire control department, Colonel Vokalchuk, could, for example, go into an open field and perform any shooting without a single table. Our teachers paid special attention to what can be useful in a war, in a real combat situation, ”says Artyom Mikhailovich. - Training on technology took place in the field. Every week - a march of five kilometers. Twice a year - combat shooting exercises, and from the third year we went on foot to the training ground solely on foot: in this way, we, future officers, developed endurance. On the landfill they lived in ordinary camp tents. We also had a five-day survival course in the forest: the cloak-tent was pulled from above, the spruce branches were laid down from below - so they slept, without any pillows and blankets.

Military wisdom Rublev comprehended in his hometown in the Kolomna Higher Artillery Command School. The father, the senior warrant officer of the Airborne Forces, died when Artyom was still a boy. We lived together with my mother. They lived hard. Probably, in part, and therefore the school, without any figurative strain, became his second home, still holds such an important place in his memory.

Rublev's first business trip to Chechnya took place in 2001, a few months after graduation (he received an appointment in the North Caucasian Military District, in the 242 motorized rifle regiment for the position of commander of a mortar battery control platoon). In October, a platoon was transferred to Grozny. After the quiet provincial Kamyshin, the sight of a war-torn city struck. A platoon spent a week and a half at the checkpoint. We spent the night in a ruined house, it was impossible to make fire. The next two months were on the Terek Ridge in constant readiness for hostilities. Here is where - thanks to the school! - The science of survival under the open sky was useful.

The second trip, from February to November 2002, was not only the longest, but also the most difficult. The battalion tactical group, where Lieutenant Rublev was included as an art corrector, traveled almost all of Chechnya. Bamut, Samashki, Shalazhi, Komsomolskaya, Alleroy, Achkhoy-Martan, Serzhen-Yurt, Vedeno, Kharachoy, Old Atagi ...

- Under Alleroi, a motorized infantry company and a mortar platoon occupied altitude and held it for six weeks. A week after we were entrenched there, Maskhadov threatened that any local loyalty to us would be shot. Soon the head of the settlement was killed, ”says Artyom Mikhailovich. “And a couple of weeks later, a large gang of four hundred people came to us.” We are only eighty-five ... Well, the squad platoon at five in the morning went to check the posts, saw the militants sneaking into the green stuff and opened fire on them from the AGS. The bandits went on the attack, but ran into a minefield and retreated.

There, in Alleroy, I learned that in Chechnya, one of thirty-three young lieutenants had died, who had come to the regiment last summer, including me. His name was Alexey Osipov. Killed by negligence - opened the radiator cap of an abandoned car, and there was installed a stretch ...

I also remember well the battle under Shalazhi. It was already in November. Somewhere in the twenty-one hour we were attacked, the battle took the third platoon. The gangsters in the dark managed to get very close. So close that at some point, the squad platoon Andrei Matavilin caused a fire on himself. We then laid mines about fifty meters from our defense. Militants could not stand, retreated to the “green”. Continuing to fire on them, he called on the BM-21 “Grad” battery fire. All near "green" turned into a flaming hell ...

Early in the morning we received an order to move to another area. When mortars were loaded into cars, one of the burning headlights shattered into smithereens. It was a sniper who fired at the flickering shadows. To detect it, and even in such darkness, there was no possibility. Immediately put out all the lights, lay down. A little later, continued to gather by touch. Fortunately the bullet then landed in the spotlight. Also a science ...

The third trip was in March - July 2003 of the year. The self-propelled artillery battery, where Rublev was then a senior officer, stood on the border with Dagestan. This trip was relatively calm. They shot at the identified militant concentrations at a distance of 15 — 17 kilometers, mostly at night.

After the 242nd regiment was disbanded, Rublev ended up in his native Kolomna, at the 1000th training center for the combat use of missile forces and artillery of the Ground Forces, where for several years, as the chief of staff of the training division, he participated in the training of junior artillery specialists. In the Baltic coastal forces fleet, in his current position as commander of a jet division, he is a little over a year. Like the vast majority of officers who went through the crucible, Artyom Mikhailovich is inclined to evaluate various aspects of combat training through the prism of his experience and apply this experience to the extent possible.

- It is mandatory to conduct practical training to repel attacks on the convoy, including overcoming forest debris on the roads. We pay great attention during the exercise to combat protection: in Chechnya, there were cases when security at night was completely cut out. Or such an important point: as an artilleryman, I need coordinates for reference to firing positions. When out of habit, in Chechnya, they tried to install appropriate signs — a pillar or, for example, a cross on a tree — the militants carried these signs. So, you need to be able to use natural landmarks: the intersection of the road, some kind of building, a large boulder, a rock. Constantly teach this to my subordinates, as well as orienteering the terrain. Even at the school, we didn’t have orienteering classes in the forest along a compass or a map. And this, as it turned out, was a noticeable gap. Today there is orientation in the program preparation, but only a few hours are devoted to it, so we fill in the missing knowledge ourselves. The program does not provide for any survival courses, although the need for this is obvious. And yet, in my opinion, in order to increase the effectiveness of combat training, one should increase the number of field exits, and they should start not from the stage of battery coordination, as it happens today, but during the coordination phase of platoons. And finally: only twenty-four shells are allocated to one live-fire today - this is not enough. The problem is well known, I hope that it will be solved soon. This year, the brigade has already begun to receive new KamAZ and combat vehicles, life is changing, so there is reason for optimism.

Ctrl Enter
Noticed oshЫbku Highlight text and press. Ctrl + Enter
We are
If you have to fight in the mountainsUkrainian army in Iraq: how it was in reality
Military Reviewin Yandex News
Military Reviewin Google News
9 comments
Information
Dear reader, to leave comments on the publication, you must to register.