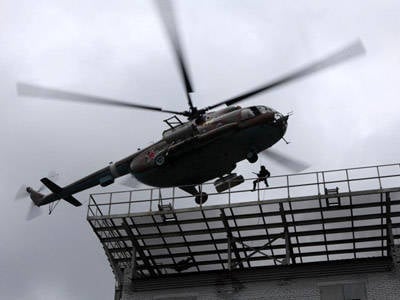 In the training center in the village of Novy, servicemen of the Separate Operational Assistance Division of the Internal Troops worked on blocking a terrain section and repelling an attempt to break through the blockade of a conditional gang, the special forces unit overcame a special fiery assault strip and demonstrated tactics to free hostages in the building.

In the training center in the village of Sofrino, the battalion tactical group and the reconnaissance unit of the Separate Operational Task Force of the Central Regional Command of the Internal Troops using special and armored vehicles, with the support of helicopter artillery, neutralize conventional terrorists in the building, in open areas and in vehicles.

In the training center in the village of Zhornovka, Smolensk Region, military personnel of the special forces unit "Mercury" of the Central Regional Command of the Internal Troops in collaboration with units of the 604 Special Purpose Center "Vityaz" of the internal troops, which, due to the legend of the exercises, are combined (aviation and by road) were transferred to perform combat missions in the Smolensk region, they will search and neutralize the conditional bandit group in the area of ​​the guarded object.

To coordinate the actions of the subdivisions, control centers have been deployed, including new command-staff vehicles, a satellite communications station and other modern communications facilities. Armored vehicles, artillery and helicopters were involved in the complex occupation.

By decision of the President of the Russian Federation Vladimir Putin, from 10 in the morning of 17 in September of 2013, the internal troops of the Ministry of Internal Affairs of Russia in connection with the conduct of special exercises "West - 2013" are put on full alert.

In accordance with the territorial defense tasks assigned to the troops, issues of testing readiness to combat sabotage and reconnaissance groups, terrorist groups and enemy troops, execution of algorithms for taking critical facilities under enhanced security, organizing interaction with military authorities, executive bodies are being worked out. subjects and local governments on territorial defense issues, as well as the implementation of standards of readiness.

Ctrl Enter
Noticed oshЫbku Highlight text and press. Ctrl + Enter
We are
Russian military personnel landed on the Baltic coast as part of the exercises ZVOResults of anti-terrorist work on Dagestan in April 2014
Military Reviewin Yandex News
Military Reviewin Google News
11 comments
Information
Dear reader, to leave comments on the publication, you must to register.