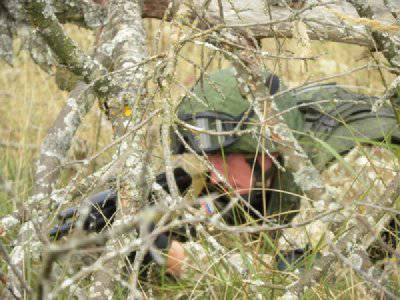 During the first days of the exercise of the Collective Rapid Reaction Forces (CRRF) of the CSTO “Interaction-2013”, “trial” battles took place with the participation of battalion tactical groups from the armed forces of the Organization's member states. The paratroopers of the 31 Guards detached airborne assault brigade of the Russian Airborne Forces as part of the designation troops worked out the issues of coordinating and phased implementation of individual elements of the practical maneuver stage.

With the command of the CSTO CRRF, on the first day, an operational gathering was held, where issues of coordination and preparation for performing tasks during a joint operation were worked out. During the command-staff training session, the commander of the KSOR, whose duties are performed by the commander of special operations forces (SSO) of the armed forces of Belarus, Major General Oleg Belokonev, decided to use the military contingents assigned to them.

As part of the Russian group of KSOR involved in the exercise, the divisions of the Airborne Forces and the Air Force of the Russian Federation total number of about 250 people. This is almost a third of the total number of participants in the joint exercise. The 31-I Guards Odshbr represented by two operational groups: controls and battalion tactical group, which consists of an airborne assault company, self-propelled artillery battery, reconnaissance platoon.

The Russian Air Force in the exercise is represented by six Il-76MD aircraft and four Mi-24 and Mi-8 army helicopters aviation. The commander of the Russian military contingent is the Deputy Commander of the Airborne Forces for Peacekeeping Operations and CRRF, Major General Alexander Vyaznikov.

In the native element

Osipovichsky landfill is rocket-artillery in its purpose. Provides the process of combat training of military units and subunits of rocket troops and artillery. So, the artillery paratroopers got, one might say, into their native element - there is where to turn around on these 8 thousand hectares. Here and the MLRS "Hurricane" feels at ease, and "Tornado" - under certain conditions.

The commander of the 2 self-propelled artillery battery of the assault assault battalion of the 31 Brigade of the Guard Captain Oleg Lozhkin is confident in his subordinates and in the successful implementation of the task. For this there is the necessary knowledge and practical experience.

31-I Guards Odshbr - wide-profile, if I may say so, the brigade as part of the Airborne Forces of the Russian Federation. It is entrusted with the tasks not only of participating in the Collective Rapid Reaction Forces, but also of carrying out peacekeeping missions, including under the auspices of the UN. This determines some specificity in the preparation of brigade personnel.

Between "war" and "peace"

Belarusian colleagues warmly welcomed the Russians and representatives of other CSTO member states. In fact, they were accepted as true brothers - and not only by arms. For example, the 31 Guards Odshbr truly Belarusian roots. The connection was formed at the final stage of the Great Patriotic War in the Belarusian Slutsk. Since that time, Ulyanovsk residents have never been to their small homeland, and this return is very symbolic.

Through the efforts of the defense department of Belarus, the general staff, and the personnel of the Osipovichsky garrison, all the necessary conditions for a “war” and “peaceful life” were created at the test site. The field camp is compact and qualitatively landscaped: the M30 and M10 tents are set up to accommodate and accommodate the personnel, tents are set up under the consumer services rooms, where you can cut your hair, pat uniforms, repair shoes. Two field baths are also deployed to organize the daily washing of personnel.

We were pleased with other necessary moments in everyday life, prudently prepared by the Belarusians.

On the territory of the field camp there are two cafes that provide servicemen not only with pastries and other products, but also with essential items. At the same time, the cafe staff every time meets the training participants and closes it much later than the official completion time.

According to the deputy commander for work with the personnel of the 31 Guards Guard Odshbr, Lieutenant Colonel Viktor Onufrechik, the Belarusian side also took care of the exercise participants' leisure time. Here and sports events, and performances of Belarusian artists, and the ability to watch television programs, as well as educational tours in Osipovichi and Minsk.

Soldiers are provided with periodicals. Among the printed in field conditions there are also fresh issues of the newspaper "Krasnaya Zvezda". There are a wide selection of board games (checkers, chess, backgammon, etc.) in the field information rooms and leisure personnel. However, the paratroopers are especially pleased with the fact that the Belarusian side had prepared and equipped an airborne complex (VDK) for training by the time they arrived at the exercise.

In a fire ambush

At the same time, the definition of “fire ambush” sounds even sweeter for paratroopers. A sample of its conduct was shown to us by subordinates of the commander of the 2 th assault assault battalion of the guard Major Ivan Velikotsky. One day, the teachings “parachuted” me to the place of the organization and conduct of the fire ambush and told me to wait ... While waiting for the paratroopers, I was fascinated by the collection of mushrooms, which here are apparently invisible. I lean over the next one, and I am from under the birch: “Hello, do not block the view!” The personnel of the 1 of the 2 airborne assault company can disguise themselves.

Immediately, the "illegal armed groups" arrived. A convoy of militant vehicles was being advanced on country and dirt roads. To carry out sabotage on infrastructure facilities, they used tactics of covert forest trails without the use of general roads. Available four-wheel drive vehicles were seized by terrorists at the airfield and from the local population.

Three trucks jam-packed with “militants,” and another one with an anti-aircraft gun, went straight to me. Fortunately here it is, desantura, side by side. Imitation worked as real. 10-15 minutes - and from the column of illegal armed formations there is not a trace left. Together with the Russians, this task was performed by servicemen of the armed forces of Kazakhstan. All 130 fighters are also representatives of airborne troops. In cooperation with them, the airmobile company of the 103 Guards Separate Mobile Brigade of the Belarusian Special Operations Forces is working, organizing ambushes on the most probable routes for the advancement of the main militant forces. The defeat of the head machine is carried out by controlled mines, the rest by fire from hand grenade launchers.

Having completed the destruction of the blockaded militant group, the CORF units begin to inspect the area, collect prisoners and trophies.

As the Assistant Secretary of Defense for ideological work, Major General Alexander Gura, head of the main ideological department of the Ministry of Defense of Belarus, stressed in a conversation with the Krasnaya Zvezda correspondent, “the teaching will demonstrate how the CORF will counter extremist groups that break through to the territory of a conditional state.” And how the collective forces will suppress terrorist actions depends on the stability in the region and the security of the local population.