On guard of peace 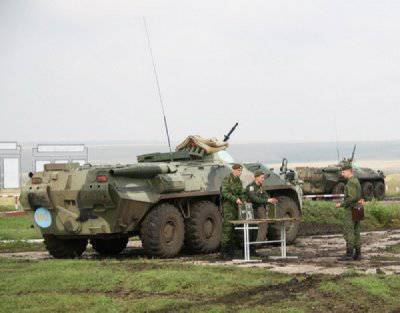 The Russian peacekeepers arrived in the area of ​​the “Unbreakable Brotherhood-2013” joint exercise with the CSTO peacekeeping forces, which will be held at the Chebarkul training ground in the Chelyabinsk region from 7 to 11 in October. The personnel of the peacekeeping brigade together with the units of the armed forces of the CSTO countries in the course of joint actions will have to work out an operation to maintain peace in the region of collective security.


The personnel of the peacekeeping motorized rifle brigade of the Central Military District made a march using the combined method from the Samara region to the Chelyabinsk region. According to the press service of the Central Military District, four military trains were involved in transporting people, equipment and weapons. In addition to the Russian peacekeepers, military contingents from Armenia, Belarus, Kazakhstan, Kyrgyzstan and Tajikistan, totaling more than 2013 thousands, will be involved in the joint exercise “The Unbreakable Brotherhood-2,5”.

The redeployment of all participants to the Chebarkul training ground is scheduled for completion on October 4. The peacekeeping contingent of Kazakhstan, which is to march from the Almaty station, will also arrive in the Chelyabinsk region by rail. Armenian troops will fly from Erebuni airfield to Shagol airbase. A military transport plane will land there aviation Belarusian Air Force, which will take off from the airport Machulishchi.

On the eve of the 15 th Separate Guards Motorized Rifle Division of the Red Banner of Berlin, the Kutuzov Order Brigade of the Russian Peacekeeping Forces was visited by a group of military attaches representing foreign 35 armed forces in Russia. The command of the district and the brigade acquainted the foreign guests with the features of equipment and training of Russian peacekeepers.

During this two-day trip, representatives of the armies of foreign countries were accompanied by Deputy Chief of Staff of the Central Military District, Major General Sergei Chuvakin. He and the commander of the 2 Guards Army Guards Major General Alexander Zhuravlev held a briefing for military diplomats on the activities of the peacekeeping brigade.

In accordance with the directive of the Minister of Defense of the Russian Federation, the brigade was formed in the Roshchinsky 1 February 2005 of the year on the basis of the 589 Second Guards Motorized Rifle Berlin Red Banner, Order of the Kutuzov Regiment, inheriting the traditions of the first peacekeeping military unit of Russia. From 19 November 1992 to November 1997, the guardsmen of the Berlin Motorized Rifle Regiment performed peacekeeping tasks to normalize the situation, restore law and order in Transnistria, Abkhazia and Tajikistan. The regiment's artillery took an active part in the first Chechen campaign.

In its newest stories From December 2005 to November 2008, the peacekeeping brigade performed peacekeeping missions in the zone of the Georgian-Abkhaz conflict. The peacekeeping compound includes three motorized rifle units and one reconnaissance battalion, special units of combat, rear and logistical support. All of them are fully staffed by contract servicemen.

In the Roshchinsky military camp, representatives of foreign armies got acquainted with the location and everyday life of the Russian “blue helmets” formation. The commander of the 15 th separate guards motorized rifle brigade of the peacekeeping forces of the Guard, Colonel Konstantin Stepanishchev, presented to foreign guests an exhibition of equipment and weapons deployed at a military airfield.

According to the UN requirements for peacekeeping formations, the crew is equipped only with light armament: the maximum caliber 82 mm, as well as the BTR-70 armored personnel carriers, Ural vehicles, and other wheeled vehicles specially adapted for peacekeeping tasks. However, according to the brigade commander, the compound is soon waiting for rearmament.

“The brigade will receive about 150 the recently adopted BTR-82A armored personnel carriers produced by the Arzamas engineering plant,” Colonel Stepanishchev said to the guards. The firepower of the BTR-82A more than doubles the capabilities of its predecessors. Instead of a machine gun turret, the new machine has a combat module with an automatic 2A72 cannon of 30 mm caliber, paired with a PKTM 7,62-mm machine gun. The armament is equipped with electric drives of vertical and horizontal guidance and a digital two-plane weapon stabilizer, which allows you to conduct aimed fire on the go.

Military diplomats also visited the former Roshchinsky All-Arms range - today the training complex Roshinsky. Here, in field work, the Samara peacekeepers showed military diplomats how tactics were worked out in the buffer zone between the conflicting parties, how to counteract various tricks and provocations of the conflicting parties in a rapidly changing situation.

At the Roshchinsky training checkpoint, which is part of the training complex, a session was held on checking documents, baggage, and inspection of vehicles. In addition, the Raschina peacekeepers demonstrated the adoption of measures to prevent the penetration of representatives of the conflicting parties into the buffer zone.

The commanders of peacekeeping units demonstrated their skills in training personnel and equipment for patrolling in the zone of a peacekeeping operation, organizing the passage of civilians through the positions of peacekeeping forces. "Blue Helmets" from Roshchinsky showed foreign senior and senior officers accurate shooting from rifle weapons and BTR, as well as quite a decent level of language training.

In the course of training at the training facilities and areas of the Roshchinsky range, the commander of the guard brigade, Colonel Konstantin Stepanischev, was accompanied by military representatives of the leading NATO countries - the United States of America and the Federal Republic of Germany. US Defense Attache Brigadier General Peter Zvak seemed to feel a little more involved in the events than other foreign military representatives.

These days, the anniversary of the first Russian-American exercise "Peacemaker-94" is being celebrated. For the first time in the framework of the joint peacekeeping command-staff exercise of the land forces of the Russian Federation and the United States, which was held at the Totsky military training ground. From the Russian side, then, the 589-th Guards Motorized Rifle Regiment took part, from the American side - the headquarters and divisions of the 3-th Infantry Division.

Subsequently, the partnership of Russian and American "blue helmets" was revived in the new format of the joint command and staff peacekeeping exercises Atlas vision. It is held for the second year in the summer in the German city of Auerbach. The partners of the Russian peacekeepers from Roshchinsky are now soldiers of the 560 reconnaissance brigade of the National Guard of the US state of Georgia.

According to the results of the joint exercise of command at the end of July, the head of the intelligence service of the guard brigade, lieutenant colonel Yevgeny Ilyushin and the commander of the 3 motorized rifle guard battalion, captain Evgeny Fomin were awarded medals by the governor of the US state of Georgia. “Your commendable achievements during the exercise, efforts to improve the level of mutual understanding of the military personnel of the peacekeeping brigades of the two states have become the key to successful results of Atlas Vision-2013,” it is written in the award certificate.

It was also understandable that the attentive attitude of the Brigadier General Reiner Schwalb, the chief of staff of the attache on defense, to the roshchina peacekeepers was emphasized. The 15-th Separate Guards Motorized Riflemen twice-order brigade of the Russian Peacekeeping Forces bears the name of Berlin, which was awarded for successful participation in the storming of the Reichstag in April-May of 1945. From 1945 to 1991, Berliners stood in the German cities of Leipzig and Halle, and now the brigade annually sends its officers to a joint peacekeeping study in the city of Auerbach in the federal state of Saxony.

Of particular interest to foreign military representatives were joint peacekeeping exercises with the allies of the Collective Security Treaty Organization (ODCS). The attention of the military attaches was occupied by the peculiarities of the participation of brigade units in the first peacekeeping exercise of the Collective peacekeeping forces of the six CSTO “Indestructible Brotherhood-2012”, which was held in October last year in Kazakhstan. Foreign military representatives were also interested in details of preparations for the upcoming “Indestructible Brotherhood”, which is scheduled for this October at the Chebarkul training ground of the Central Military District.

Ctrl Enter
Noticed oshЫbku Highlight text and press. Ctrl + Enter
We are
Completed a surprise check of the troops of the Central Military District
Military Reviewin Yandex News
Military Reviewin Google News
Add a comment
Information
Dear reader, to leave comments on the publication, you must sign in.