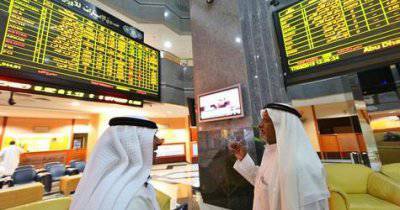 The United Arab Emirates decided to invest in Russia a lot of money - five billion dollars. The press wrote that the money will be built roads (including the Central Ring), communication networks, airports. However, other analysts suggest that road projects pay for themselves very slowly and may in general be unprofitable, which speaks of political interest covered by Arab bounty.


12 September The Russian Direct Investment Fund and the Department of Finance of Abu Dhabi signed an agreement on the allocation of up to 5 billion dollars for infrastructure projects in Russia. This was announced by the general director of the fund, Kirill Dmitriev, reports "Sight" with reference to ITAR-TASS.

However, one should not think that this is the first major investment of the UAE in the Russian Federation. In 2010, the Emirates entered the top ten largest investors in the Russian economy for the first time. UAE investment in Russia then amounted to about 18 billion dollars.

As Olga Samofalova writes ("Sight"), the impetus for Arab generosity was the exceptional tax breaks that Russia granted to investing state-owned companies.

And on the eve of the signing of the papers, the government of the Russian Federation approved a draft law on ratification of an agreement with the United Arab Emirates on tax exemption of investment income for state-owned companies of both countries. The agreement itself was signed in December 2011. The signed document, notes O. Samofalov, has a truncated version: tax breaks apply only to government agencies, which include central banks, state pension funds of the parties, central and regional governments, financial and investment companies, which are state-owned by 100%.

The Arab side received profit tax benefits from Russia, a zero dividend rate, and protection from taxation of interest and income from the sale of property (except for real estate). The Russian investor in the UAE will receive preferences for corporate tax and income tax.

“It is important to zero the dividend tax, which in Russia is 15%. With other countries, Russia is usually not so generous and only reduces the tax on dividends from 15% to 5-10%. Meanwhile, it was precisely the zeroing of this tax that helped seriously interest the state investors from the UAE. As a result, Russia did not lose ... "

As the IA "REGNUM" With reference to the Kremlin’s press service, 12 of September, Vladimir Putin met with the Crown Prince of Abu Dhabi, Deputy Supreme Commander of the UAE Sun. Mohammed Al Nahyan. During the conversation, the Russian president said: “We have very good relations with your country, and, of course, the Emirates are Russia's leading trade and economic partner in the Middle East, one of the leading ones. In general, the volume of trade is not so big, it can be much more - 1,5 billion. But we have very good prospects and growth trends. ” Vladimir Putin added: “Great opportunities are opening up in the field of investment cooperation, and I am very pleased to note your agreement with the Russian Direct Investment Fund on joint work and on possible investments in this joint work of up to 5 billion dollars. I hope that this work will develop successfully, and we, of course, will support and administratively accompany it in every way. ”

Mohammed Al Nahyan said in response that "we are doing everything possible to build bridges between the two states - the Russian Federation and the United Arab Emirates." He noted that the UAE is engaged in large investments in the world, and said: “I thank you, Excellency, for giving us the opportunity to build such a new bridge for relations with Russia. We have strong confidence and confidence in your market, which is why we are in your country today and we hope that investment projects will be successfully implemented and built up. ”

Now to the question of what will be “successfully implemented and built up in Russia”.

Igor Naumov and Mikhail Sergeev ("Independent newspaper") indicate that the conditions of investment of the Arab sovereign fund in Russian projects to experts are not clear. For example, a large project for the Central Ring Road may be unprofitable. But foreign sovereign funds need to be given a refund guarantee.

Alexander Razuvaev, director of Alpari’s analytical department, says: “In the case of such investments, Russian state structures are the guarantor of the return of funds. At least, foreigners perceive their obligations as a sovereign Russian debt. At the same time, agreements may establish a minimum percentage of profitability plus a share in the profits from investments in a joint venture. ”

The article notes that specific investment agreements are, as a rule, opaque. Such investments actually increase the external public debt, even if formally they do not belong to the debts of the government.

Igor Nikolaev, director of the Institute for Strategic Analysis at FBK, says: “Theoretically, infrastructure projects can be recouped. But in the Russian context, calculations for the profitability of long-term investments may not be justified. ” According to him, the entry of Abu Dhabi into Russian projects may be part of political agreements that Russians may never know about.

And Dmitry Sorokin, first deputy director of the Institute of Economics of the Russian Academy of Sciences, believes that investment in gas pipelines and oil pipelines is of interest to Abu Dhabi, and not in roads. “This is also infrastructure, the same as roads and railways, communications,” explains the scientist. According to D. Sorokin, Arabs are unlikely to agree to invest money in something other than the "pipe". Investments in the transport infrastructure imply long return periods, and it’s not a fact that the investment will pay off altogether.

Analyzing the V.O. Novoyaryov meeting and the delegation of the leadership of the Emirate of Abu Dhabi, Dmitry Butrin (Kommersant) First of all, it notes that the investments of the UAE and other countries of the Persian Gulf through the RDIF are designed, among other things, to stabilize the Russian foreign policy position on key issues of the region, especially on the Syrian one.

As for direct investment, according to Kommersant, first of all, Abu Dhabi is interested in the Central Ring Road, the project of reconstruction of the federal highway М11, projects in the field of telecommunications and power grid infrastructure.

Love Lyulko (Pravda.ru) reminds that the merit in the conclusion of the transaction belongs to Kirill Dmitriev - the former banker of Goldman Sachs. Also, the analyst notes that the crown prince, who met with Putin, is the deputy Supreme Commander of the Armed Forces of the United Arab Emirates.

Kirill Dmitriev is a graduate of Starford University and Harvard Graduate School of Business. At the beginning of his career, he worked as an investment banker at Goldman Sachs in New York and as a consultant at McKinsey & Co. in Los Angeles, Moscow and Prague.

The author of the article points out that road infrastructure has always been a weak point of the Russian economy. But only for the World Cup 2018 of the Russian Federation need to build 7,7 thousand. Km and 2 thousands of kilometers of railways, which will cost 35 billion dollars.

L. Lyulko also recalls that the crown prince of Abu Dhabi arrived in Russia after the Prince of Saudi Arabia, Bandar bin Sultan (general intelligence chief). At the same time, the UAE is an ally of the United States and Saudi Arabia. The analyst points out that the emirate of Abu Dhabi has recently invested 13 billion dollars in Turkish projects, so investments in Russia are relatively small. The material ends with a curious conclusion that “the more rich sheikhs are involved in the economy of the Russian Federation, the more cautious they will behave in determining their political preferences.”

Thus, while it is premature to talk about the specific investments of five billion dollars. There is no point in judging the political component, if any. In the end, the UAE invested in Russia before - for example, in 2010, which could not be connected with the Syrian issue.

Observed and commented on Oleg Chuvakin
- especially for topwar.ru
Ctrl Enter
Noticed oshЫbku Highlight text and press. Ctrl + Enter
We are
The fall of the Syrian airbase Abu ad-Duhor. The longest siege of the civil war is overGeopolitical mosaic: Western journalists discovered Machiavelli in the service of Putin, and Obama was advised to take an example from Don Corleone
Military Reviewin Yandex News
Military Reviewin Google News
73 comments
Information
Dear reader, to leave comments on the publication, you must to register.