A crime without a statute of limitations. Why did Yeltsin need to shoot the White House? 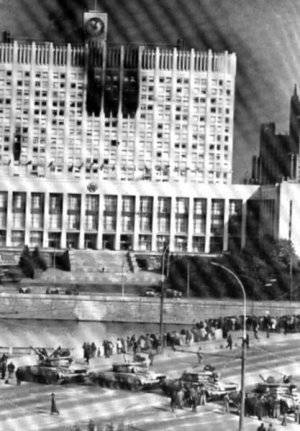 Eighteen years ago, something happened in our country that later came to be called differently: insurgency, putsch, “Black October” ... Many words. Empty and meaningless. And the essence is the same: in the fall of 1993, a bloody coup d'état took place in Russia, for which none of the perpetrators has yet responded even morally.


We are talking about the tragic events of September 21 - October 5 1993. Many still have one question: why? After all, this is not something that could have been avoided - it could not start at all. But someone stubbornly warmed up the conflict between the branches of government. So who

I address my question to a well-known Russian politician, deputy of the Supreme Council - the highest parliamentary body of Russia 1990-ies, a direct participant in those bloody events, who almost became their victim - Sergei Baburin. Here is what he said:

- It was obvious: Yeltsin does not need a civilian world. Just not needed. For one simple reason: he wanted power. Absolute power. And his entourage wanted the freedom to steal as much as he wanted. And they really wanted to. Parliament interfered. And they decided to simply eliminate it. From the Kremlin, then, the provocation was for provocation. Rudeness for rudeness. Already in May, Yeltsin openly declared that he was going to "sort things out" with the Supreme Soviet, and began on him an "artillery preparation" ...

In practice, this meant streams of dirt on all television channels, massive brainwashing and a splash of such monstrous disgusting propaganda that I personally still feel sick. I have never seen anything like this before or after. Exempt from censorship of the Soviet-style media, corrupt political analysts, other "free-thinking" citizens showed a sample of demosychoidal propaganda, which can not be called "democratic" language. By the way, many of these Yeltsin apologists today are building up the "conscience of the nation", they are members of the Public Chamber of the Russian Federation, they teach us how to live and build a civil society ...

Yeltsin was afraid of the army. Then I was still afraid. And he was not sure that at the decisive moment she would execute the order. Therefore, he: a) first of all decided to rely on internal troops; b) called mercenaries from abroad. These are the second, the most interesting. Do you know the word "Beitar"? Let me explain: “Beitar” (“Joseph Trumpeldor Union”) is the semi-terrorist organization of Zionist, established in 1923 year in Riga (founder Zeev Zhabotinsky). In practice, they are engaged in political terror.

... According to the official version, the first shooting began near Ostankino at about seven o'clock in the evening. In fact, as evidenced by the participants in these events, who were subjected to merciless reprisals by forces loyal to Yeltsin, the first shooting of demonstrators took place in 15.30 near the mayor's office. On the people who had gathered at the rally near the main entrance of the White House, machine-gun fire was opened from the windows of the Luzhkov administration and automatic fire from its porch. Almost immediately after that, at 15.45, machine-gun fire from the windows of the Mir Hotel (the headquarters of the Main Directorate of Internal Affairs and the 20 military unit) was opened at the people who had gathered at 3111-th entrance of the White House. 7 people were killed. Here are those who gave the order to shoot at unarmed people: Commander of the Internal Troops of the Ministry of Internal Affairs, General Kulikov AS (subsequently the head of the Ministry of Internal Affairs and the deputy of the State Duma) and the head of the Moscow Main Department of Internal Affairs, General V.I. Pankratov.

Do you know what the ratio of Ostankino forces was? From Makashov: 4000 unarmed demonstrators, 18 machine gunners and one rocket launcher (attached to the guard column). Well, plus Makashov himself, too, with a gun.

Question: what can be stormed by such forces? ..

But how was the television station guarded? Eyewitnesses testify: 25 armored personnel carriers with the emblems of the Vityaz unit and from 500 to 700 submachine gunners of the Dzerzhinsky division. Plus full-time security.

Could a military general Makashov give an order to assault people in such a ratio (as the pro-Yeltsin media loudly lied to)?

The fire was squall and cross. Initially, machine guns and assault rifles were beaten from the windows of ASK-1 and ASK-3. Five minutes after the start of the shooting, the Vityaz armored personnel carriers left the area, blocking the escape routes, and began to shoot unarmed people from large-caliber machine guns. They killed everyone. There are witnesses of how the lieutenant "Vityaz" gave the order to shoot the ambulance crew that arrived at close range. Paramedic Shlykov Pavel Alexandrovich, 1972 year of birth was killed. The rest received various injuries.

Now again to the official data. According to him, about 40 people died on the square in front of Ostankino. Recall for comparison, in December 1989 of the year, during the revolution in Romania, the Ceausescu troops in the same way opened fire from the same APCs on the exact same crowd. The number of victims then went off scale for several hundred. Who is here, what, if I may say so, “bullets” fly out of the barrel of an armored troop-carrier? Such a "bullet" any crowd flashing through. So the official figures are very, very deliberately understated.

.... On 5 o'clock in the morning on October 4, Yeltsin issued decree number 1578. According to him, General Kulikov, who had just been appointed commandant of Moscow, was given powers not limited by anything. What does this mean in practice? Guess yourself. In the city, all laws were actually repealed. Internal troops received the right to kill. Kill uncontrollably and indefinitely. And they killed ... They killed, killed, killed ...

By six o'clock in the morning, the remnants of the defenders of parliament took refuge in the White House building.

The snipers began by opening fire on the units that were on Yeltsin’s side. What for? But Yeltsin, as mentioned above, did not trust the warriors. And they decided to stimulate them. Kill a couple of officers and blame everything on the "rebels." The fire was fired from the roofs of houses already occupied by the GUO, and (attention !!!) from the roof of the American embassy! On which, according to different versions, for several hours already stood a helicopter under steam - to save Yeltsin: in case of failure of his plan).

And now I will give the main official data. The number of dead 3-5 October 1993 of the year. Judging by the fact that television is ushering in, they were from 142 to 147 people. Well, let's estimate whether this is true. At about 7.30 in the morning, the first assault on the building begins. The balance of power is as follows: in the White House there are about 10 000 people. They have an 62 machine gun, several grenade launchers and incendiary bottles.

Total, on 4 units of armored vehicles on one machine. And now so well established that pro-government forces in October 4 102 sniper rifles were involved. In addition, at the time of the execution of the parliament around its building, up to 20 000 soldiers of the Ministry of Defense and internal troops were concentrated.

So what kind of assault can we talk about? Is it even possible to use the word "assault" here? Where appropriate to use the word "massacre", "violence", "massacre" ... The massacre of its own citizens. During this, I may say, "storm" in the parliament building, according to witnesses and a number of independent experts, have been killed and a half thousand people. According to the same sources, up to three hundred people died near Ostankino.

It was something else. Something so shameful and disgusting that it will never be recognized by the current servants of the people. It will not be because in this case no amnesty will save some of them.

I am talking about extrajudicial executions of captured compatriots.

Witnesses of these executions are still alive and can testify. Among them are members of the Supreme Council of S. Baburin, VI Shashiashvili, O. Rumyantsev, S. Umalatova and others; Lieutenant Colonel M.V. Rutskoi (brother of Alexander Rutskoi). And others who then miraculously survived. According to their testimonies, the officers of the Internal Troops of the Ministry of Internal Affairs, the GUO and the Beytar mercenaries bypassed the structure of the prisoners and those who had traces of gunpowder in their hands were taken in an unknown direction. Moreover, several times Beitarovites soon returned and said that people died while trying to escape. The corpses were stored under a humpbacked bridge.

There is a whole bunch of medical reports saying that people were killed at close range, shot in the back of the head.

There is evidence of fighters from the Dzerzhinsky division who have gone over to the side of the Supreme Soviet. There were data about the larger military formations that moved to the aid of parliament ... They are all no more. During the "assault" the attackers received orders to kill people in uniform on the spot. Then, when the funeral of Dzerzhinsk fighters who died "in battles with insurgents" was shown on TV, participants in the defense of the White House identified these officers and soldiers in the coffins who were alive and well at the time of the addition of weapons. Here are the names of some: Major S. Gritsuk, privates O. Petrov and head YV Requests to the competent authorities to clarify the circumstances of their death remained unanswered. ... Then the cleaning of the catacombs under the building began. There are testimonies of people who miraculously escaped from there. According to them, almost everyone who was there was shot on the spot. Part of the dungeons flooded with people. This was done on the orders of the newly appointed commandant of the White House, General Arkady Baskayev. The corpses were stored in a bunker shelter. Later they were carried through the passage to the subway line.

According to an independent investigation, conducted in 94-95 years, direct, directly responsible for the mass murder of prisoners of war are:

- General of the Interior Ministry MVD Romanov (OMON and the consolidated company OMSDON);

- Generals Rushaylo and Pankratov, as well as the ex-mayor of Moscow Luzhkov Yu.M. (divisions of the police department of the internal affairs department of Moscow);

- Generals Korzhakov and Barsukov (the regiment of the presidential guard);

The reader can familiarize himself with the result of this investigation in the book Anathema. By Ivan Ivanov. His real name. As far as I know, several people worked under this pseudonym. Read it, people! I have not set forth a tenth part of what is written there.

PS Do you know what really shocked me then? The position of our liberal intelligentsia. The conscience of the nation, so to speak. Some of them then simply radiated joy. Bulat Okudzhava, he altogether said: "I enjoyed this spectacle." After that, the actor Gostiukhin came to him to a concert in Minsk, broke before the eyes of the public, and threw his records into the face of Okudzhava ...

Ctrl Enter
Noticed oshЫbku Highlight text and press. Ctrl + Enter
We are
About Stalin and KhrushchevWhat you didn't want to know about England
Military Reviewin Yandex News
Military Reviewin Google News
71 comment
Information
Dear reader, to leave comments on the publication, you must to register.