24 September 2013
17
18 August 1944 German intelligence received from a reliable source information that in Belarus in the rear of the Red Army is located in the environment of the Wehrmacht numbering up to 2,5 thousands of people. Loyal to the oath and the Fuhrer, the soldiers intend to fight and make their way to the west. Commanding the surroundings lieutenant colonel Sherhorn. The command of the Wehrmacht was delighted with such a gift of fate and began to make plans to use such a large military unit in the rear of the Soviet troops. The Germans could not even imagine that the information they had received was the beginning of Operation Berezino, a grandiose mystification started by the NKVD 4. 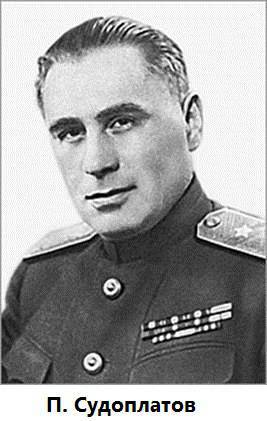 Essence of the operation

The idea of ​​the operation arose in the spring of 1944. The author of it was, according to some information - Colonel Maklyarsky, according to others the idea of ​​the operation was proposed by Stalin himself. The purpose of the operation was to make the Germans believe in the presence of a large military unit in the rear of the Soviet troops and divert to its support the maximum possible amount of the material resources of the enemy. The surrounded grouping was supposed to be (according to the Hitlerites) a suitable base for sabotage groups, therefore, among others, the task was to lure as many parachutists as saboteurs oriented toward sabotage in the Soviet rear and organizing an intelligence network into its location.

The apotheosis of the operation was to be the “exit” of the surrounded grouping in the location of the German units, during which it was supposed to introduce an appropriately prepared and equipped special unit of the Red Army into the open passage by the Germans in order to break the front.
The operation was entrusted to the 4-e NKVD Office. The operation was supervised by the Head of the Department P. Sudoplatov, the deputy organizer of all activities carried out as part of the operation was Deputy Sudoplatova N. Eitingon. Operations received the code name "Berezino". Not all plans come true. But what has been done is now being taught in special schools as the filigree work of specialists of the highest level. 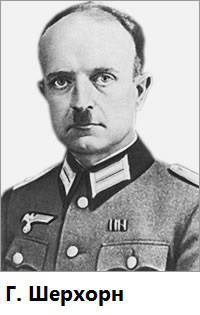 First of all, it was necessary to select a suitable candidate for the position of "group leader". What was needed was a really existing officer, of a sufficiently high rank, whose ability to rally people around himself and lead them along the enemy’s rear for a long time would not cause the Germans to have any doubts. At the same time, it was supposed to be a person who consciously made a decision on cooperation with the Soviet secret services, ready and (which is equally important) capable in the case of direct contact with emissaries from Berlin to play the role of the commander of the unit heroically fighting behind enemy lines.

In search of a suitable officer, Sudoplatov’s staff departed to camps for German prisoners of war. The desired candidate was found by I. Shchors and M. Leonov in the 27 / 1 camp near Moscow. It was the Wehrmacht Lieutenant Colonel Sherhorn. In early August, he was taken to Moscow.
From the accompanying documents: Sherhorn Heinrich Gerhardt, born 1897 Lieutenant colonel. Professional military. The commander of the rear guard regiment. NSDAP member since 1933. Captured near Minsk 9.07.1944. Confused pessimistically. Convinced of the defeat of Germany. I agree to cooperate. Assigned nickname "Shubin".

Information from a trusted source

18 August 1944, the first "bait" was abandoned. The “reliable source” was the agent “Max”, who had worked for the Abwehr since February 1942. The pride of German intelligence was in fact an employee of the NKVD, Alexander Demyanov, who was successfully introduced into the ranks of the Abwehr. In the interests of Operation Berezino, the communications officer of the General Staff of the Red Army was “seconded” to Minsk, where he participated in the interrogation of a captured German officer. During the interrogation Demyanov allegedly found out about Lieutenant Colonel Sherhorn's group fighting in the rear of the Red Army. For a week, Berlin kept silence, checking through its channels the presence in the Wehrmacht of such a lieutenant colonel and his track record. 25 August “Max” received a response radiogram, in which he was asked to contact the group and report the coordinates of the drop in cargo and the parachute group. Germans bait swallowed. The operation has begun.

For the reception of the “guests” and the cargo, the group formed under the command of Major GB Borisov flew to the place of the alleged deployment of the “part of Sherhorn” (village Glukhoe, Minsk region). The group included 16 leading employees of the 4 Directorate, 10 ethnic Germans - anti-fascists, who have long been collaborating with Soviet intelligence and 20 OMSBON machine gunners. That was the composition of the whole "army of Sherhorn."

Together with the group, Maklyarsky, Mordvinov, Serebryansky, Fisher (Abel) flew to the area of ​​operation - the entire color of the Soviet counterintelligence of that time, the head of the operation, Eitingon, and Lieutenant-Colonel Sherhorn himself, who were to meet the “guests”. At one of the bases left by the Soviet partisans in the area of ​​Lake Pesochnoye, the Sherhorn headquarters was urgently equipped. The Germans brought in were dressed in the form of Wehrmacht soldiers. The group was supplied with captured food and personal items. The arriving agents had to remain in ignorance for as long as possible that this “part hiding in the Belarusian forest” was nothing more than a sham. The whole area of ​​the operation was cordoned off by patrols in order to exclude even the possibility of any accident. But it’s impossible to foresee everything.

How the operation nearly failed before it started.

Danger came from where it was not expected at all. Not German agents, but vigilant Soviet citizens almost destroyed the Berezino operation at its very beginning. NKVD officers only started to create an “encircling camp” in the deep forest, and on the table of the People's Commissar of the NKGB of Belarus, Tsanava laid down a report about the appearance of a military partisan military base consisting of Wehrmacht soldiers, accomplices of the Hitlerites and the Red Army deserters in Lake Pesochnoye.

Fortunately, the People's Commissar did not hurry, did not order the liquidation of the "partisans", but reported this report to Moscow, suggesting that the detected group be used for operational purposes. From Moscow, he received an unexpected reply that in the area of ​​Fr. Sand is a special operation. Also, Canaan was instructed to render all possible assistance to the officers conducting the operation. But Eitingon received a harsh scolding from Sudoplatov and instructions to strengthen the security of the area of ​​operation. 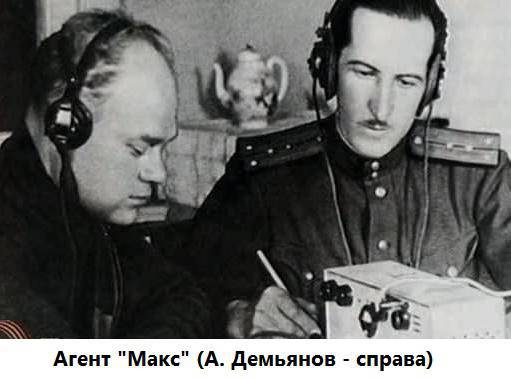 On the night from 15 to 16.09. 44 in the specified "Max" area landed 3 parachutist. Arrived met and transferred to the "headquarters". The senior group Kurt Kibert told Sherhorn that the courageous Wehrmacht soldiers fighting in the rear of the Soviet troops were reported to the Fuhrer himself, and he demanded to do everything possible to save the soldiers loyal to him. After a cordial meeting, "guests from Berlin" came out of the dugout, where the soldiers, already in Soviet form, opened their eyes to the true state of affairs. The next day, a radiogram went to Berlin saying that the group had arrived safely, confirms the presence of the Sherhorn squad, and that one of the parachutists was seriously injured during the release and is unconscious (refused to cooperate).

Convinced of the real existence of part of Sherhorn, the German command began to intensively supply it weapons, ammunition, medicines and food. For its supply, Goering singled out an 4 transport aircraft. In the course of the first month, 16 agents also arrived at Sherhorn, some of them were recruited by the NKVD and joined the “game”. The operation began to gain momentum.

In Germany, the fate of Sherhorn and his soldiers was closely watched personally by the commander of Army Group Center, Colonel-General Reinhardt, and the head of the 103 Abwer team (callsign Saturn) Barfeld. But the main protagonist from the German side was Obersturmmbuhführer SS “Rebel saboteur No. XXUMX” Otto Skorzeny. Skorzeny was by no means a simpleton. During the operation “Magic Shooter” (a set of activities for the supply of the Sherhorn Group), they abandoned 1 agents, which were not reported to Sherhorn. The agents were tasked with secretly entering the specified area and checking whether Sherhorn’s group really exists. All 8 agents were caught, some were recruited and became part of Operation Berezina.

In his book, The Secret Operations of the RSHA, Skorzeny describes in detail how he organized the air bridge with the "encircling units", how, with great difficulty, he knocked out resources for the "Sherhorn soldiers." (As the Germans retreated to the west, melting stocks of weapons and food inside the Reich) If “the sabotage expert knew” that the contents of the “packages” he collected with such difficulty went to supply the Red Army, he would have torn from his book these pages!

While Skorzeny was collecting his "packages", "Sherhorn's soldiers" made their way to the west. On the way, they repeatedly engaged in combat with the rear units of the Red Army, carried out sabotage, took prisoners, and collected “invaluable” intelligence information. All this required a lot of work on the preparation of data indirectly confirming the legend. These are notes in the newspapers “on the elimination of bandit formations in the rear”, and orders for the rear of the guard about increased vigilance, and reports from local agents.

In December, the 1944 squad that had grown up was divided into 3 columns, and the Nazis had to take care of the 3 groups. German radio operators constantly spotted the group talks among themselves and their tearful requests for help (radio operators worked in the Lubyanka in sweat). Sherhorn continued to accept cargoes and agents. In December, 4 agents, ethnic Belarusians who had been trained in the Abnukommand 103 and who had information about local agents, were thrown out to the unit. With the release of "Sherhorn", Polish agents began to arrive at the borders of Poland. Most agents "successfully infiltrated", began to "deliver information" and conduct sabotage.

The command of the Wehrmacht praised the courage of the "fighters of Sherhorn." In one of the containers, the Chekists found Iron Crosses with unfilled award sheets. Sherhorn himself was ordered to be a colonel by the order of the Fuhrer of March 16 on March 1945, and on March 23 was awarded the Knight's Iron Cross.

The end of the operation "Berezino"

5 May 1945, a radio operator on Lubyanka, received the latest radiogram for the “Sherhorn Group”, in which the command thanked the colonel and all his soldiers for their courage and loyalty to duty and regretted their continued support. So ended the operation "Berezina" - a grand bluff, and not disclosed by German intelligence. 8 months of weapons, ammunition, food, warm uniforms, medicines, so necessary to the Nazis at the front, were sent to support the "group of Sherhorn." Prepared agents from among the "adopted by Sherhorn" "handed over" the local agents and became channels for disinformation of the enemy.

If it were not for the end of the war, it is still unknown how long the Soviet security officers would be led by the German special services. So, reading the memoirs of the venerable leaders and employees of the Abwehr and Zeppelin (SD), be careful. One should not take for granted their stories about the creation of an extensive intelligence network in the territory of the USSR, about conducting large-scale sabotage operations in the rear of the Red Army. Very often, objects exploded only on paper, and "successfully implemented agents" wrote their reports under the dictation of the Chekists. What we have every right to be proud of.

Ctrl Enter
Noticed oshЫbku Highlight text and press. Ctrl + Enter
We are
Operation "Monastery"Diplomats of the People's Commissariat of Defense: on the eve and during the war
Military Reviewin Yandex News
Military Reviewin Google News
17 comments
Information
Dear reader, to leave comments on the publication, you must to register.