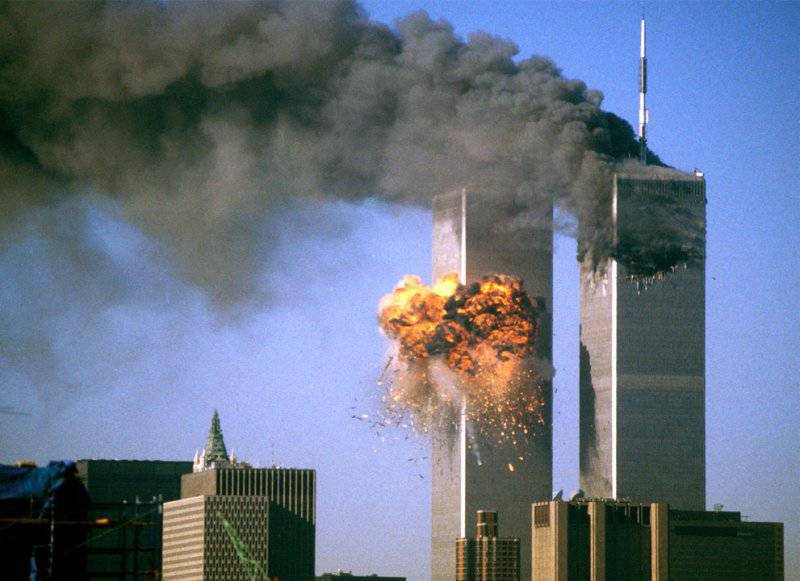 In the USA, a large-scale terrorist attack is possible with the use of chemical, bacteriological or nuclear weapons.

Recently, another anniversary of the tragic date, the monstrous 11 terrorist attack of September, took place, as a result of which one of the American symbols disappeared - the World Trade Center building, the famous “twin towers”. A huge number of people died, thousands of destinies were mutilated.

But there were other results - US intelligence agencies received additional funding and additional powers for the war with al-Qaeda.

Most of all received the Central Intelligence Agency. Of course, the Pentagon felt a little deprived - and we saw a severe crisis on the Korean Peninsula, which allowed the military to demand additional funding. Here, quite inopportunely, the sequester of the American budget was drawn, which affected all security officials. And somehow suddenly there was a new loud terrorist attack - an explosion at the Boston Marathon. But there were a lot of questions about this terrorist act - it was too clumsy, he was committed. And the situation on the Korean Peninsula has almost returned to normal, having moved from military preparations to the sphere of verbal battles. However, the sequestration of the US budget while no one has canceled. And here, as if by magic, the Syrian problem escalated - an excellent reason for a little war and new allocations.

But bad luck happened - Moscow extremely negatively apprehended this idea of ​​Washington, calling into question the reliability of information on the use of chemical weapons by Syrian government troops. Moreover, some US allies in NATO agreed with the Russian position on the inadmissibility of a military solution to the Syrian problem. So what after this order to do the American security forces? They still need money.

As you know, they do not pay for anything better than for their lives, especially if they are in danger. Therefore, if there is no particular danger, it can be created - as we can all do, we saw with the example of 9 / 11. And it is likely that we may soon see something similar - and the scale may turn out to be much larger.

In order not to bother yourself and the reader with unfounded assumptions, we simply give a set of facts that were collected and presented to the American portal CityWatch by well-known human rights activist and journalist from Los Angeles, Lisa Cerda, member of the Tarzana Property Owners Association, vice president of the Community Rights Foundation Foundation of LA.

An elementary analysis of these data suggests that the US government is preparing for an emergency situation in the country in early October that will require the mobilization of efforts by various services. And one of the states of the so-called “third district”, including the states of Washington, Delaware, Maryland, Pennsylvania, Virginia and West Virginia, may be threatened.

But the most interesting thing is that the facts testifying to the preparation for the occurrence of an emergency situation are surprisingly united by common terms. However, judge for yourself:

Since the end of July, units of the UN peacekeeping forces have been conducting training, in which samples of American weapons, American English, as well as exercises to conduct combat operations in large cities are being conducted. Preparation should be completed by the end of September.

The Center for Disease Control for October 1 ordered delivery to the indicated states of medicines (mainly antibiotics) for 11 million dollars.

A vaccine against a new coronavirus should be prepared for October 1 - according to the decision of the recent emergency meeting of the World Health Organization (such an urgent meeting was held only once).

Simultaneous testing of GPS and communication satellites begins with 29 September. Such tests are conducted regularly, but never coincide, since this will lead to the loss of the ability to control the movement of objects and the situation.

By 28 September, courses should be completed for all US Department of Homeland Security personnel in the AP-15 rifle and shotgun, as well as the use of knives.

By October 1, the Ministry of National Security should receive 2800 vehicles with increased mine protection.

By September 30, the National Guard officers must be trained in curbing riots and helping people in emergencies and natural disasters. In addition, for units based on the east coast, the exercise will take place over 10 days (starting September 26) in Virginia and Delaware, although they should be held in the Gulf of Mexico.

From September 25 to October 2, an emergency alert system should be tested daily.

300 school systems in September should give each student a “rescue kit” - a supply of everything you need in case of an emergency on 3 day.

In the period from September 28 to November 5, all US Army soldiers on vacation are prohibited from leaving the country.

The teachings of the 911 service, which should have already begun, are postponed until September 27 and will be held on the northeast coast.

What can all this talk about? The fact that they are waiting for some very large disaster with very serious consequences. If you think about and recall the specifics of the work of the special services, it is quite possible to assume that a large-scale sabotage is being prepared - most likely in the form of a terrorist attack using a chemical or bacteriological weapon. Given the current geopolitical situation, it can also be assumed that representatives of the Syrian government will be accused of this sabotage, which will thwart Russia's peace initiatives to resolve the Syrian problem and give grounds for the United States and its allies to start operations against Syria.

If we go a little further and add additional facts, we can assume that nuclear weapons can also be used for a terrorist act. So, recently on the portal www.storyleak.com was posted information about the secret movement of nuclear warheads up to 5 kilotons from the US Air Force "Dyce" base near Abilene, Texas. No one knows exactly which stocks are transported and what is the final destination. But one more fact draws attention to itself - the interest of the Pentagon and the CIA suddenly renewed recently to the already practically written off mortars for firing tactical nuclear weapons M388 "Davy Crockett".

Initially, it was assumed that these nuclear warheads could be used to strike from Israel’s territory (without visible US involvement) on the alleged chemical weapons depots (including underground), as well as bunkers, command centers and shelters of the Syrian government, as a result of nuclear weapons a high temperature explosion can neutralize chemical weapons, and the low power of warheads will avoid the spread of radiation and large casualties. However, recent events in the United States themselves cause vague concerns about whether this nuclear weapon can not be used in the United States under the guise of an attack by foreign terrorists?

I would like to hope that in the near future the world will still not be shuddered by a new terrorist attack in the United States and will not see a new war. But if this does not happen in the next couple of months, this does not mean at all that this will not happen at all - such a large-scale preparation, which we see now, just does not take place. However, taking into account the US Federal Reserve's expected statements on October 16 regarding new measures to save the budget, it can be hypothetically assumed that the US is preparing for civil unrest and war with its people - for some reason, police units are equipped tanks and unmanned aerial vehicles. And for some reason, a huge number of plastic coffins have long been purchased.

Ctrl Enter
Noticed oshЫbku Highlight text and press. Ctrl + Enter
We are
The world we leave, the world we enter, and the world between themInterview by President Bashar Al-Assad to the Sunday Times
Military Reviewin Yandex News
Military Reviewin Google News
55 comments
Information
Dear reader, to leave comments on the publication, you must to register.