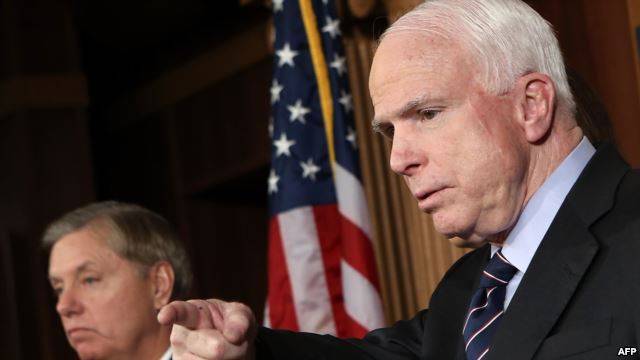 Senator John McCain was interviewed by a Radio Liberty correspondent in New York on the day that McCain’s letter was published on Pravda.Ru website. The goal of one of the most influential US senators, the traditional critic of the Russian authorities, is to explain their views on major international issues, including the Syrian crisis and the US-Russian relations of the Russian audience.


- Senator, I had a feeling that the critics and supporters of your performance in Pravda.Ru - and this is partly surprising - were divided approximately equally: some say that you absolutely definitely pointed out the main Russian troubles, others insist that the author does not understand what he is talking about. Your reaction

- I can understand these two points of view. But the facts are a stubborn thing. My comments are based on facts. This and the suppression of the opposition, this and the case of Magnitsky, this and the complete control of the authorities over the press, this and continuing violations of human rights.

- What is your goal, deciding to speak in this edition?

- It happened almost by accident. During a conversation with an American commentator, I said that I doubt that Pravda would publish my comment. Following this, one of our media outlets turned to two Pravds. One of them led to the publication, I quote: "We can consider the issue of publishing an article if its position does not contradict the position of the Communist Party regarding the war in Syria."

Naturally, this condition was unacceptable. But another "Truth" was ready to publish my article. One of my goals was to uncover the truth. The fact is that what Mr Putin said about America and what is happening in our country directly contradicts reality. And I am ready to take advantage of any opportunity, no matter how insignificant it is, to turn to the Russians directly. Because I am pro-Russian, because the insults to which the Russians put Putin’s autocratic regime must, in my opinion, meet with opposition from our side.

- Senator McCain, judging by the reaction of the Russian audience to your speech, many Russians agree with Vladimir Putin regarding the preference for a diplomatic resolution of the Syrian problem. They do not understand why you insist on force measures?

- I agree with Mr Putin that diplomacy is better than war. But those examples of the intervention of the United States in conflicts that I know of were undertaken in the interests of our national and universal security. Take, for example, Bosnia. With the support of Russia, there was a destruction of people. After eight thousand people were killed in Srebrenica, we began to act. Take Kosovo, where the Serbs with Russian support staged a massacre of people belonging to another ethnic group. If we look at Afghanistan, at first even Russia supported our power actions in this country, because it was there that the terrorist attacks of September 11 were organized, the victims of which were thousands of Americans. In terms of Iraq, we won in this conflict. The situation was under control, and then President Obama refused to leave a small American contingent there. After we leave Afghanistan, it will not be the place where al Qaeda plans terrorist attacks and from where it attacks the United States. If we recall the Second World War and the large-scale support for Russia provided by the United States, the support that helped Russia defeat Germany, then I suspect the Russians are not indignant about our intervention in the conflict in that case.

- With regard to the Syrian conflict, do you think that you need to follow the path proposed by Russia, or do you prefer some alternative?

- According to Vladimir Putin, the chemical attack was a “cunning provocation” arranged by the rebels. Vladimir Putin knows that this is not true. Should we take at face value the words of a person who spreads a deliberate lie? Obviously, this attack is not the work of the rebels. His foreign minister said that Russia would by no means support actions under the Seventh Article of the UN Charter, providing for forceful actions in the event that Assad does not fulfill the requirements of the UN. Very few people believe that Bashar Assad will honestly cooperate with the international community. After all, he still continues to insist that his forces did not suit these attacks. But we know that they did it. That is, there is a big question about trusting what Assad says. But wait and see. In the meantime, we are obliged to support those who fight against him, that is, the Free Syrian Army, because while we are talking, Russian planes loaded with military equipment arrive in Syria, which Bashar Asad uses to destroy his own people. This is a shameful fact.

- In my opinion, Russia has been a great country for centuries. Her contribution to world culture, literature, art is immeasurable. At the same time, we all remember the horrors of the Stalin era, the destruction of millions of people, especially in Ukraine. We know about the courage of the Russians, they demonstrated this during the Second World War. The intellectual level of the country is extremely high. I am a big fan of Russia. And I believe that the Russians should have the right not to be sent to prison for their words, not to be persecuted because of their sexual orientation. Now, according to international human rights organizations, Russia is not a free country. The atmosphere in the country is very bad.

“When it comes to American criticism of the human rights situation in Russia, some Russians believe that the US is too intrusive to the internal affairs of the country, others say that Washington should be more active in criticizing Russia. What is your point of view?

“I think that when the Magnitsky Act is extended, it will have a positive effect similar to the effect of the Jackson-Vanik amendment during the so-called Cold War. There are quite a few tools with which you can convince the Russian authorities of the need to respect the basic civil rights and freedoms of Russians. Russians should have the right not to fear arrests like the one that Sergei Magnitsky went through, they should not go to prison for life, as was actually the case with Khodorkovsky.

- Whom do you think the action of the "Magnitsky law" should concern?

“I do not believe that all the people involved in the senseless torture, beatings and murder of Sergei Magnitsky, have suffered responsibility for this. Our Ministry of Finance interprets the law approved by us very narrowly. I think that the operation of the law should affect representatives of the highest level who are responsible for what happened.

- Senator, Vladimir Putin just announced that he does not rule out that he will run for president for the fourth time ...

- I am shocked that he may want to become the president of Russia for the fourth time.

- Apparently, you are not very cute, or am I wrong?

- I can not say that I do not like it. It's not about his personality, but about his actions. I knew a lot of people for whom I did not feel much sympathy, but they caused my respect and admiration. The question is what does his government do. Why, on the eve of the Olympics in Russia, a law is being passed, according to which, in essence, actions of persons with sexual orientation that he does not like are equated with crimes?

- Senator McCain, how do you see the future of US-Russian relations?

- I think a lot depends on what happens in Syria. There is no doubt that Vladimir Putin won a major victory. He has become an important player in the Middle East, his role is similar to the one that Russia last played in the 1973 year. He looks like a real mediator, and it is not surprising that some Middle Eastern leaders re-evaluate their positions and their relations with the United States.

- What do you think about the reboot: has it exhausted itself, as many say, and if so, what's next?

- I said a long time ago that we need to develop a realistic approach to relations with Russia. We must clearly understand what the tasks are and what are the motivations of Vladimir Putin. His goal is to restore the prestige and influence of the Russian empire, and he is ready to take extraordinary steps to achieve this goal. In Chechnya, he gave a massive slaughter, we know about it. He invaded Georgia. Now he is putting pressure on all countries in the zone he calls near abroad. This is the essence of Vladimir Putin, and we must take it as it is.

- How do you assess the policy of the Obama administration in this context?

- How blatant failure! Proof of that is the situation that I just described.

- Senator McCain, you were a witness historical events in US-Russian relations. What does your vast experience tell you, how will relations between the United States and Russia develop?

“If we are unshakable, if we build our relations with Putin on a realistic basis, if we take certain steps, such as renewing our efforts to create an anti-missile defense in Europe, we will extend the effect of the“ Magnitsky law ”to other violators of human rights, if we if we sign free trade agreements with European countries and help them achieve energy independence, this will be a realistic approach to relations with Vladimir Putin.

- Do you think such plans are feasible?

- Everything will depend on the president of the United States.

Ctrl Enter
Noticed oshЫbku Highlight text and press. Ctrl + Enter
We are
Interview of V. Putin to Channel One and the Associated Press AgencyWhat you didn't want to know about England
Military Reviewin Yandex News
Military Reviewin Google News
82 comments
Information
Dear reader, to leave comments on the publication, you must to register.