24 September 2013
73
Recently, the majority of our fellow citizens, answering the question of whether real heroes exist in our time, demonstrate a smirk, saying something like this:


Yes, what kind of heroes? Some "buy-sell" and "take what is bad lies" around. Werewolves in uniform, sales prosecutors, mayors, rectors, judges and others. Heroes in the past.

One can agree with this proposition, well, quite partially, taking into account the thesis “There were people in our time!” It is impossible to agree with this one hundred percent by definition. The reason is that from television screens and from the front pages of the newspaper we are much more likely to broadcast about robberies, murders, fraud and bureaucratic corruption, rather than about people who sometimes at the cost of their health, and sometimes at the cost of their lives, try to accomplish until the end what is considered their duty. Yes, it’s foolish to argue with the fact that we need to know corrupt officials in person, that we should be informed about the presence of fraudulent and robber groups, but at the same time we cannot lose sight of the positive information that often tells us that people of honor and high dignity, who are ready to honestly do their work and even sacrifice themselves, have by no means ceased in our country.

The fact that honest and decent people, people with a high level of personal responsibility in our country have, can demonstrate the information that came from the Amur region - from the zone of the largest flood in recent decades. Can these people be considered heroes? - judge each of you.

City Komsomolsk-on-Amur. The flood wave from the regional center - Khabarovsk - reached the 250-thousandth city by the beginning of the second decade of September. The water began to arrive at an unprecedented pace, threatening to break through the so-called Mylkinsky dam - originally six meters in height and the 5-kilometer-long embankment, which protected the southern districts of the city. Rescuers, military and ordinary volunteers from among the inhabitants of Komsomolsk-on-Amur and other cities, realizing the danger of breaking through the dam, increased its height by 4 meters, using the ground for this. However, this was not enough. The water arrived and arrived, stepping over the 9-meter mark. The water mass of the lake Mylki (Milka), which was fenced off by a dam, was about to flow through the last centimeters of the groundwork. The situation was aggravated by the fact that a strong wind rose in the region of the lake (up to 25 m / s), and a real storm began.

To protect the city from complete flooding, hundreds of people in chemical protection suits or ordinary jackets and raincoats lined up on top of the groundwater obstacles to water, cut the bulk dams, turning them into waterproof fabric shields that had to be held by the hands under the waves. People resisted the elements for several hours, and they managed to keep the city. The battle for Komsomolsk-on-Amur on the Mylkinskaya dam was fought knee-deep in icy water, under the onslaught of waves and hurricane wind. 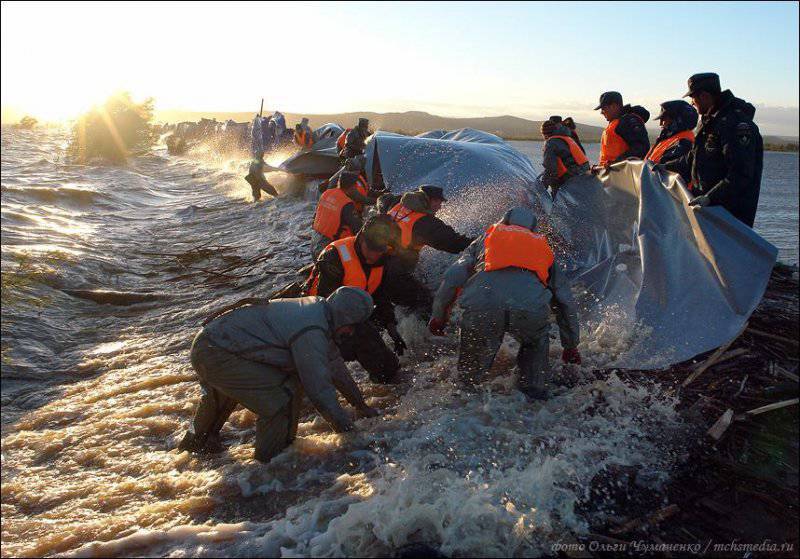 The water turned over multi-ton KAMAZ trucks on a sagging soil literally a couple of meters away from the human shield that protected the city. Instead of KamAZ trucks, cadets, students, military and contract servicemen, rescuers, volunteers from among local residents, including even schoolchildren, had to work. While some were holding cut bulk levees, trying to stop the element, others passed sandbags along the chain.
At the same time, the dam was also strengthened from below. Here the group of divers of the Ministry of Emergency Situations worked. Divers worked truly in the most difficult conditions, risking at any moment to be literally thrown on the fortifications built by a storm. 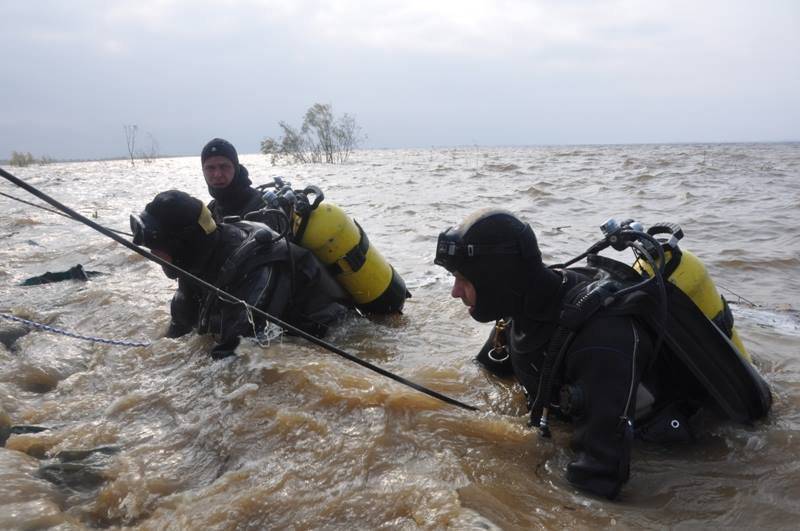 One of those who, defending his hometown from a breakthrough, worked on the Mylkinsky dam, is a ninth-grader Alexander Alemasov. Alexander traveled to the dam himself - after school, and worked here, helping adults, until late at night.

I'd like to help my hometown. I hardly notice tiredness, I am used to working.

This is by the way that our modern young people can only drink beer at the doorways, but because of the computer they don’t get out ...

Emergencies Minister Vladimir Puchkov personally met with a ninth-grader from Komsomolsk, who thanked Sasha, handing him a letter and a gift. But, to be honest, a gift is somewhat strange - an iPhone ... Of course, for a modern schoolchild, an iPhone is a cool thing, so to speak, but here it is not an iPhone that should be presented, but a state award. Let's hope that this case will also come to this, as it will find the matter of awarding all those who defended the Mylkinskaya dam, and with it the whole 250, the thousandth city. 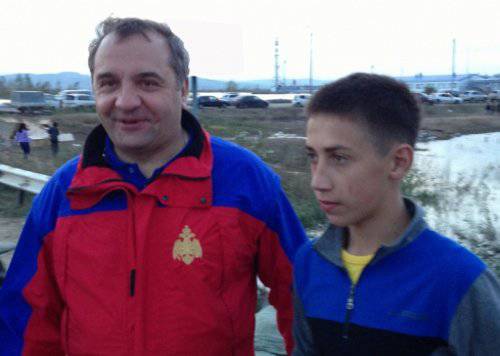 It is surprising that even after what Alexander Alemasov and other Komsomolsk-on-Amur defenders mentioned in the material did, there are such gentlemen in our society who, even in this case, find a reason for stinging expressions. For clarity, we give several examples of assessing the actions of a boy by “individual people”.

A certain Nikita Bobrov writes in one of the social networks (a quote without spelling corrections, but with a “zapikivaniem” mat):
"Nashol about school ...".

I would like to ask Nikita this: but nothing, as long as people like you warm their soft seats, Alemasov and hundreds of other people tried to do everything so that you were “dry and comfortable”? .. I would like to express myself more harshly, but then it turned out that Nikita Bobrov did not reach the age at which he could be "tougher". By the way, Nikita Bobrov's favorite quote, which they posted on their page on the popular social network:
I somehow do not care how I look in your eyes. In my I look great, this is important.

It says a lot, doesn’t it ... Doesn’t psychologists at school No. XXUMX of the city of Komsomolsk-on-Amur, in which he studies, pay attention to the boy ...

PS The Mylkinskaya dam and other objects on Amur were held: cadets of the Voronezh and Ivanovo institutes of the State Fire Service of the Emergencies Ministry, soldiers of the military service 1042 (Khabarovsk), 1043 (Kamchatka Krai), 978 (Urals), 653 SC Emergency Services Ministry (Siberian Rescue Center), military units Of the Russian Federation, among them lieutenant Igor Kovalev, residents of the city of Komsomolsk-on-Amur. On behalf of the Military Review information resource, I want to say sincere thanks for the work to those people who have taken and continue to take an active part in countering the elements in the Far East and eliminating the consequences of its rampant.