24 September 2013
123
On Saturday, armed with machine guns and grenades, people broke into the Westgate shopping center in Nairobi, Kenya. The media wrote that the terrorists were from 9 to 15. We know only the exact number of victims - 68. In addition, as a result of the attack, an 300 man was injured. Among those killed were relatives of the Kenyan president. The Islamist group Al-Shabab claimed responsibility for the attack, stating that the attack with the shooting and taking of hostages was revenge for the participation of the Kenyan troops in combat operations against Al-Shabab in Somalia. According to eyewitness accounts, the attackers talked in Somali and Arabic. According to CNN, the group itself is published on the Internet with the names of nine attack aircraft - there were three Americans, two Somalis, a British, a Canadian, a Finn, and one Kenyan. However, the list was subsequently deleted. 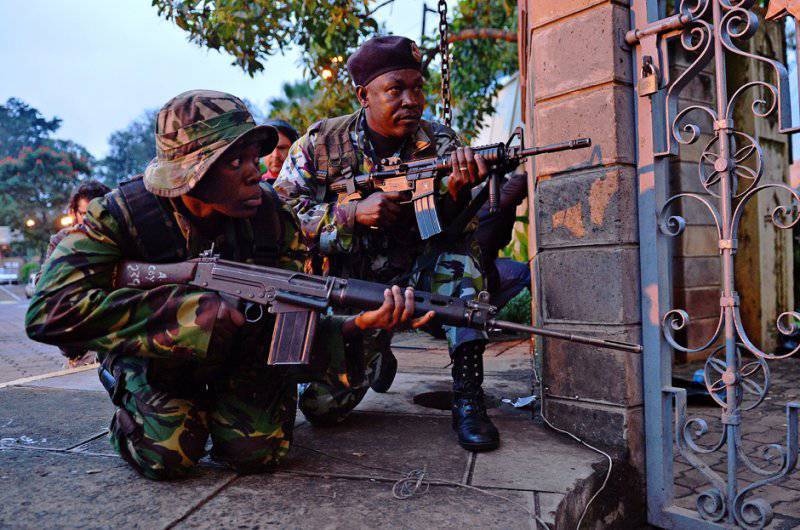 September 21 gunmen attacked visitors to the Westgate (Westgate) shopping center in Nairobi. Shoot - or rather, kill - they did not start immediately. The key point: before the firing of machine guns, the militants said that they allowed Muslims to leave the building. The latter only needed to name the mother of the Prophet Mohammed. The one who answered the question unsuccessfully or was silent, or laid on the floor, or immediately shot. After fluently polling the public for knowledge of the Koran, the terrorists opened fire in bursts and began to hurling grenades.

Responsibility for the attack was “officially” assumed by the Al-Shabab group associated with Al-Qaida, which used Twitter for its statement.

The authorities were able to evacuate more than a thousand people from a shopping center popular with foreigners and rich Kenyans. The operation to free hostages taken by the militants continues to this day. The exact number of people captured by the militants is unknown: according to various estimates, there are no more than thirty and no less than ten.

“This is the most sophisticated center of Nairobi. “There is always a lot of security and security cameras everywhere,” she said in an interview. "BBC" Natalia Glotova, an employee of a foreign company, who lived for several years near Westgate. “You can't even take pictures inside.” If you try, then the guards immediately appear from under the ground. ”

An eyewitness, an employee of the Netherlands Embassy, ​​Rob Vandaike, told the Associated Press that he was sitting in a restaurant when intruders threw hand grenades into the shopping center. Then came the gunfire. Later, army units entered the building.

According to some reports, reports "Bi-bi-si", the invaders brought in the shopping center weapon under the veil. It is not clear how many men and women are among them.

Now the area around the building cordoned off by police and military units. The operation continues. 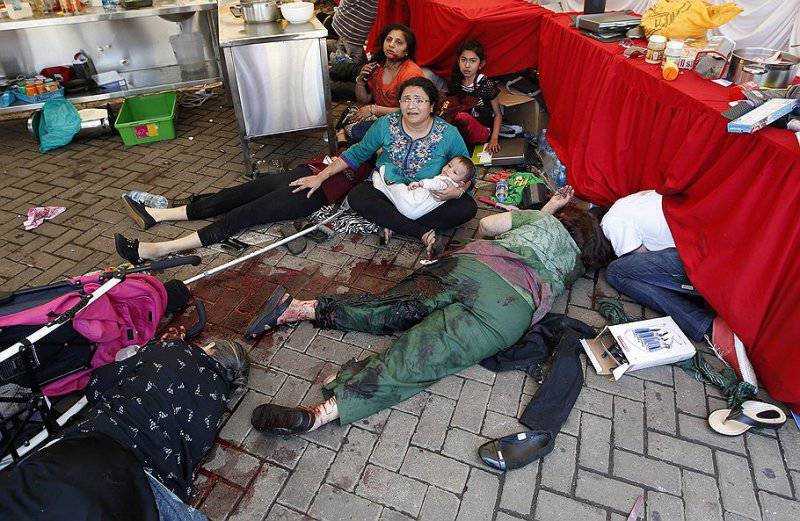 As transmits ITAR-TASS With reference to the Daily Nestion, after the release of the majority of the hostages, the assault on the premises where the militants were stationed was not stopped. Colonel Cyrus Ogunu, a spokesman for the Armed Forces of Kenya, made a statement: “Most of the hostages have been released. The Kenyan Defense Forces established control in most of the building’s premises. ” The military did not disclose how many people were freed and how many terrorists continue to resist. It is reported that the militants took refuge in a room with windows and partitions of bulletproof glass. (According to other information, we add, the militants spread out on different floors).

The terrorists not only stated via the Internet that the action in Nairobi was revenge for the participation of Kenyan troops in combat operations against it in Somalia, but also challenged President Uhur Kenyat, who promised to severely punish the murderers.

“From where Kenyatas take power to threaten us.” We fought with the armed forces of Kenya for two years. If Uhuru wants peace from us, then he should withdraw his troops from Somalia, ”Reuters news agency reports the words of the representative of Al-Shabab in Somalia, Abdiaziz Abu Musaba.

It is interesting that among the militants who participated in the attack on the shopping center in the capital of Kenya, even US citizens were discovered. Reports about it "Lenta.ru" with reference to CNN. The American channel refers to the lists allegedly published on Twitter, but subsequently deleted by the Al-Shabab group.

According to CNN, the list included nine names of the alleged invaders: three Americans, two Somalis, a British, a Canadian, a Finn, and only one Kenyan. 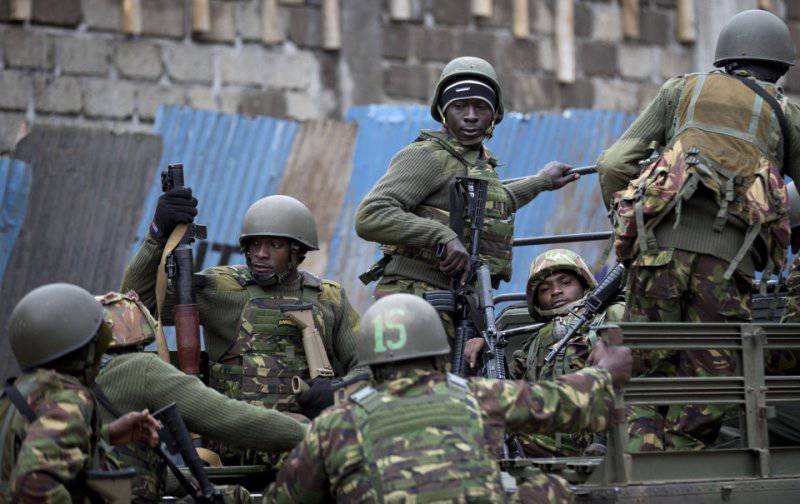 NBC reports that the FBI is now investigating reports about the possible involvement of US citizens in events in Kenya. According to this channel, among the attackers there might not even be three, but five Americans, two of whom belong to the Somali diaspora, registered in the state of Minnesota.

As transmits RIA News" with reference to France Press, Al-Shabab militants threaten to kill the remaining hostages. “We have instructed the inside mojaheds to take action against the hostages,” the agency quotes the statement of the representative of the group Ali Mohamud Raj. It appeared on one of the Islamist sites.

Sergey Strokan (Kommersant) draws a parallel between the Westgate attack and the major 2008 bombing of the year in India:

“The object of the Islamist attack, which began on Saturday and stretched for more than a day, was Westgate shopping center in the center of Nairobi. In its scenario, the “Kenyan 11 of September” resembled a five-year-old mega-terrorist attack committed by a group of terrorists in the business capital of India, Mumbai in November 2008.

The target of Islamic militants in both cases became the centers popular with foreigners and representatives of the local elite, business cards of the two cities. Symbolic coincidences are found even in the names: if in the most westernized city of India, the shooting of visitors and the taking of hostages among other places took place in the Taj Mahal hotel at the India Gate complex (India Gate), but in Nairobi, the slaughterhouse took place in Israel’s fashionable the Westgate shopping mall. ”

The special representative of the Russian president for Africa, the head of the international committee of the Federation Council, Mikhail Margelov, hopes that the Kenyan leadership will cope with the consequences of the terrorist attack. Commenting on September 22 RIA News" The situation in Kenya, Margelov said that “Islamist group Al-Shabab has taken responsibility for the terrorist attack in the mall of Kenya’s capital Nairobi — Al Qaeda’s official militant network in East Africa since February last year ... "

Speaking about the reasons for the attack, he said: “Of course, the killers' tasks could have included elementary shop robbery, but Al-Shabab was the successor of the once powerful Somali Union of Islamic Courts, and therefore only the desire to plunder the causes of the tragedy against the backdrop of Shelves do not open. " Margelov is convinced that "this act of terrorism, the motive of which is the active participation of the Kenyan military contingent in the mission of the African Union in Somalia, where Al-Shabab is outraged, spreading its atrocities to neighboring countries." He also recalled that "Kenya recognizes the legitimacy of the Transitional Federal Government of Somalia, calls for increased international assistance to this government, prepares military personnel for the Somali army." 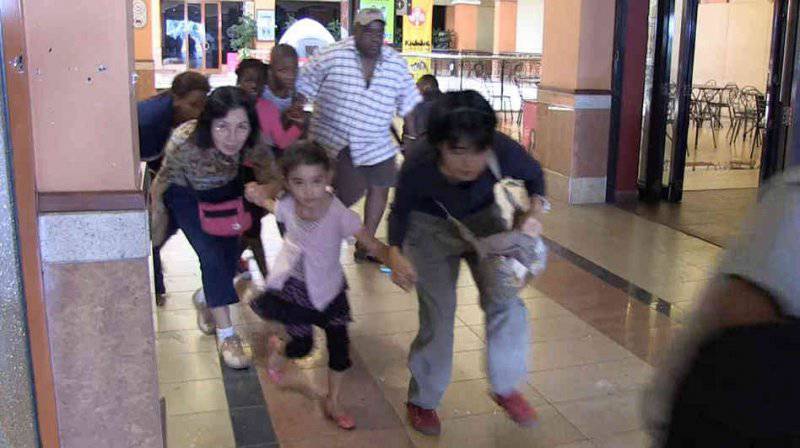 Margelov believes that "the recent peaceful election of the President of Uhuru Kenniata is an indisputable achievement of democratic procedures and modernization reforms in Kenya." According to him, “this alone is the subject of hatred by the jihadists of Al-Shabab, who carry out terror both in Somalia and in neighboring countries.”

President Kenyat turned on the nation. “The vile criminals who committed this cowardly act hoped to intimidate, sow discord and cause despair among Kenyans,” he quotes. ITAR-TASS. “We have repelled terrorist attacks in the past and will defeat them again.”

Assistance to Kenya in the fight against terrorists was offered by the USA, Canada and some other states.

According to a representative of the US government, the wife of an employee of the United States Agency for International Development (USAID) died. A spokeswoman for the US National Security Council, Caitlin Hayden, announced that Washington is ready to assist Kenya in bringing to justice those involved in the attack.

The press service of Canadian Prime Minister Stephen Harper said that among the dead - two Canadians. The country is ready to provide "any help" to the Kenyan authorities in bringing to justice those involved in the attack, Harper said.

Died at Westgate and two Frenchmen. President Hollande "condemned this cowardly attack in the strongest terms."

British Foreign Secretary William Hague said that the Kingdom’s Foreign Office "maintains close contact with the Kenyan authorities over what happened at the Westgate shopping center in Nairobi."

As for international organizations, UN Secretary General Ban Ki-moon is confident that the terrorists will be brought to justice. Martin Nesirky, a spokesman for the secretary-general, said the actions of the militants were "a deliberate attack aimed at defenseless civilians."

To this we must add that, as long as the United States, the United Nations and the Western “international community” condemn the Islamist terrorists in Kenya in a friendly chorus, they actually support them in Syria ...

Observed and commented on Oleg Chuvakin
- especially for topwar.ru
Ctrl Enter
Noticed oshЫbku Highlight text and press. Ctrl + Enter
We are
Kenya against Somali terrorists: war on the Horn continuesResults of the week. "So I have a shaggy heightened"
Military Reviewin Yandex News
Military Reviewin Google News
123 comments
Information
Dear reader, to leave comments on the publication, you must to register.