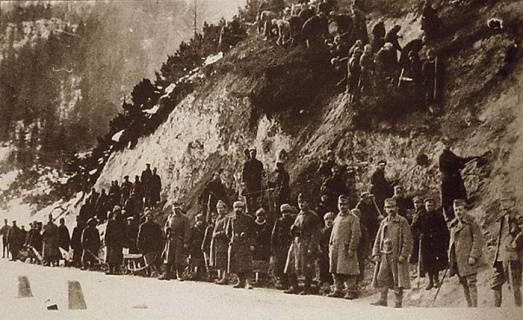 On the construction of the Russian road were involved from 10 to 12 thousands of prisoners of war from the Russian Empire. Photo courtesy of the author

For the first world war 1914 – 1918 the name of “imperialistic” or “Germanic” was fixed by the Soviet historians. But, right up to the October events of 1917, it was called “the Great” and “The Second Patriotic” (the first one in the 1812 year). In today's Russia, it largely continues to be an “unknown” war. What is not surprising: any memory of her was carefully washed out from the pages of textbooks stories, and its material evidence in the form of Russian military graves were mercilessly ruined (as, for example, the cemetery of the St. George Cavaliers at Sokol in Moscow) or disappeared, falling into disrepair. The only exception is probably some of the burial places in the Kaliningrad region of the Russian Federation - the former territory of East Prussia, and Russian memorials in the territory of foreign countries: Poland, Germany, Austria, Hungary, Romania, the Czech Republic, Slovakia, France, Greece, Serbia, Slovenia, etc. It is not surprising, therefore, that the interpretation of the First World War, which was shameful and inglorious as war, continues to dominate: as if there was no victorious Galician battle (1914), unprecedented in its heroism of defense of the fortress Osovets (1914 – 1915), the Erzurum battle and the capture of Trapezund (1916) ... The only deviation from the general rule is the Brusilov breakthrough (1916) mentioned in the Soviet historiography.

On the eve of the approaching 100 anniversary of the outbreak of World War I, it is necessary to pay tribute to the memory of 1 million 300 thousand of our compatriots killed on the battlefields, 4 million 200 thousand wounded (of which 350 thousand died of wounds), 2 million 417 thousand, past the horrors of captivity, about 500 thousand. Missing.

Paradoxically, in some foreign countries, in particular, in small Slovenia, the memory of the Russian victims of the First World War has not only been carefully preserved for a century, but in recent years it has also prompted the Russian side to take part in this important matter. Every year on the last Sunday of July, near the Slovenian town of Kranjska Gora, a ceremony is held to commemorate Russian soldiers who died in Austrian captivity in the 1915 – 1917 years. The 2013 year was not an exception - in 21 the first time the official Russian delegation consisting of representatives of the parliament and the government, the Russian embassy in Slovenia honored the memory of compatriots. The Slovenian side was represented at the highest level - the ceremony was attended by the President of the Republic of Slovenia Borut Pahor and the Prime Minister Alenka Bratushek.

Traditionally, wreaths were laid to the obelisk at the mass grave of more than 300 unnamed Russian prisoners of war. Traditionally, hundreds of local residents, as well as the descendants of the first wave of Russian émigrés, came here at the call of their hearts. Traditionally, words of grief about unknown victims of World War I and expressing gratitude to the Slovenian side for preserving their memory sounded. It did not speak of this solely protocol for the Russian side, the ceremony only about the origins of the tradition, the participants of its origin were not mentioned, not a single name of the Russian prisoner of war, whose remains are buried under a monument erected and lovingly preserved by Slovenes.

According to the research of the University of Ljubljana’s Calls Zupanich-Slavec, the first Russian prisoners of war in Kranjska Gora appeared in the 1914 year - 25 Siberians, who were used primarily for household work. However, since the summer of 1915, the situation has changed. After Italy went over to the side of the Entente and declared 23 to it on May 1915 of the war of Austria-Hungary in the valley of the river Soča (Italian name Isonzo - mentioned in E. Hemingway’s novel “Goodbye weapon! ”), The so-called Soshsky Front unfolded, during which, in the period of May 1915-th to December 1917, the 12 battles took place, which ended with the defeat of the Italian troops. In this connection, large groups of Russian prisoners of war — soldiers of various nationalities: Russians, Ukrainians, Belarusians, Tatars, Georgians, Jews, and even Volga Germans — began to be brought to Kranjska Gora by rail. All of them are usually, without distinction, called "Russians" and used their work in the construction of a strategically important highway through the high-mountain pass Vršić (1611 meters).

According to various estimates, thousands of Russian prisoners of war were involved in construction from 10 to 12. In inhuman conditions - many hours of hard physical labor, life in poorly heated barracks with poor feeding and illnesses - by October 1915, they had completed the construction of the 30-kilometer-long stretch of road leading to the front, but continued to work on supporting walls, drains and clearing roads from snow drifts. On it immediately began to transport a variety of military cargo and the transfer of troops. In parallel, the labor of prisoners of war was used for the construction of the cable car. Not only hunger, cold and diseases took their lives, but also many accidents and accidents at construction, during blasting and other types of hard work. Often prisoners of war buried their dead comrades along the road, denoting the burial with short-lived wooden crosses.

The real tragedy happened 8 March 1916, when a huge snow avalanche suddenly fell from the southern slope of the Moistrovka and Robichya mountains - tons of wet, heavy snow with tremendous force fell on the anti-avalanche shields, which, unable to withstand the onslaught, collapsed, crushing all the inhabitants of the building hulls - workers of the northern camp. Among them were Russian prisoners of war and their Austrian guards. The second time the avalanche collapsed on Sunday 12 March. Rescue work was not carried out because of the continued avalanche danger and the refusal of prisoners of war of the southern camp to senselessly risk their lives. Because of the martial law, the data on the victims were classified, so the record of their number was most likely made according to rumors and assumptions. The researchers of this catastrophe claim that the number of victims was 200 – 300 people, whereas the residents of Kranjska Gora consider that there were at least 600 people. The author of the monograph “Borovshka Village” View Cherne believes that information taken from the chronicles of the local church, which deals with 272 victims, can be considered the most reliable. When the snow melted, the dead were transported to various cemeteries, most of all to Kranjska Gora, to a mass grave, to the place where the Russian chapel was later placed, to the military cemetery in Trent, some were buried in separate graves right on the slopes.

12 May 1917, an avalanche struck the southern camp, then 30 Russian prisoners of war and 6 Austrian soldiers guarding them died. Despite the tragic incidents, Russian prisoners of war had to work further: the entire 1916 year and until the beginning of October 1917, construction work was carried out, as well as the maintenance of the road in difficult climatic conditions of the high mountains.

The total number of victims is estimated at about one thousand. After the end of the First World War, part of the Russian soldiers did not want to return to the Russia devastated by the revolution and the Civil War and remained in Yugoslavia. With their participation and thanks to the efforts of the local community of Kranjska Gora, which in 1912 – 1936 was run by Mayor Iosif Laftijar, the last refuge of the dead Slavic brothers became the subject of constant care. And starting from 1921, Russian White-Immigrants from all over Yugoslavia, together with their families, began to gather annually in Kranjska Gora and make foot pilgrimages along the “Russian road”. Church ceremonies were held near the chapel, which were usually timed to the day of St. Vladimir, on the last Sunday of July. The chapel became for them a symbol of abandoned Russia.

This tradition continues today: the descendants of Russian emigrants are indispensable participants in annual ceremonies. Anyuta Bubnova-Shkoberne, a professor at the Law Faculty of Ljubljana University, recalls how she was still an 8-year-old girl in 1952 with her father, a well-known Yugoslav engineer-seismologist Sergei Bubnov, and his grandfather, rear-admiral of Russia fleet Alexander Bubnov (1883–1963) began participating in the annual pilgrimages to the Russian Chapel. The service was first conducted by priests of the Russian Orthodox Church Outside of Russia from Belgrade and Zagreb, and in the 1970s and 1980s themselves were descendants of Russian emigrants with the participation of local Catholic priests. In the early 1990s, thanks to the efforts of the first Ambassador Extraordinary and Plenipotentiary of Russia to Slovenia (1994–1997) Alexei Nikiforov, Ambassador Extraordinary and Plenipotentiary of the Republic of Slovenia to the Russian Federation (1993–1996) Sasha Gerzhin and Permanent Representative of the Republic of Slovenia to the UN European Office (1992 –1997) Anton Bebler, members of the Slovenia-Russia society, officials from Russia and Slovenia, representatives of the Russian Orthodox Church began to take part in the Day of Remembrance of Russian Soldiers. In 2006, in connection with the 90th anniversary of the tragedy at the Vrsic Pass, the Russian chapel was fundamentally restored, and the section of the road from Kranjska Gora to the Vrsic Pass received the official name “Russian”.

DEAD SHADOWS ARE NOT IMMUT

At the 2013 ceremony of the year, as in the previous two decades, members of the Russian delegation gave correct speeches about Russian-Slovenian friendship, thanked the Slovenian side for contributing to the perpetuation of the memory of compatriots, expressed hope that the 100 anniversary of the Vrshicha tragedy should be commemorated Interstate Summit. Only here, nothing was said about specific steps to perpetuate this very memory, and nothing seems to be done except protocol events. For many years, Slovenian local historians have been trying to restore the names of Russian soldiers who died while building the road, but the doors of the state-run Vienna archives remain closed for them (the 100-year ban may be lifted just before the anniversary). To open them already now is possible only with the efforts of statesmen who make protocol trips to the picturesque burial places of compatriots.

Apparently, the Russian side highly appreciates the contribution of the community and administration of Kranjska Gora to preserving the memory of the Russian victims of the First World War 1914 – 1918. This can be confirmed by the fact that during the celebrations the Ambassador Extraordinary and Plenipotentiary of Russia in the Republic of Slovenia Doku Zavgayev conveyed to the mayor of the alpine town Jura Zherjava gratitude of the President of the Russian Federation “For his great contribution to the perpetuation of the memory of Soviet soldiers who died fighting against fascism in the territory of the Republic of Slovenia "(INFORMATION: on the territory of Slovenia there are more than 50 tombs of Soviet soldiers and prisoners of war who participated in the partisan movement in 1941 – 1945 years, but none of them are present in the territory of the municipality of Kranj Ska Gora). Are we still ashamed of the victims of the “imperialist” war, or is it unworthy of our gratitude to preserve precisely their memory?

Only in Austrian captivity was 917 thousand Russian prisoners of war, of whom more than 27 thousand found the last refuge in a foreign land (including about 10 thousand in Slovenia), the vast majority of their graves are nameless. The best memory of them is not the planned construction in Russia of the pompous monument “To the Unknown Soldier of the First World War”, but the appearance of their restored names on the obelisks. Anniversary celebrations on the occasion of the 100 anniversary of the First World War will be heard, and she risks remaining “unknown”, as the names of hundreds of thousands of Russian soldiers who fell on the battlefield and in captivity remain unknown.

Ctrl Enter
Noticed oshЫbku Highlight text and press. Ctrl + Enter
We are
C George on the chest. Cavaliers of the Order of St. George on the fronts of the First World WarWorld War II: The Fall of Imperial Japan
Military Reviewin Yandex News
Military Reviewin Google News
32 comments
Information
Dear reader, to leave comments on the publication, you must sign in.