23 September 2013
47
Slingshot held in the hands of every boy. However, hardly anyone perceives it as a real weapon. And in vain! A number of firms in the west produce slingshots, not only as children's toys, but also as full-fledged combat systems for special forces.


In the process of the development of civilization from the primitive communal system to our time, man had to create weapons of various purposes. First, in this capacity, he used stones, sticks, animal bones. Often, these items were thrown by our ancestors at the enemy so that the first samples of throwing weapons appeared. In the future, developing and gaining experience, the man moved to the creation of special weapons for hitting the enemy at a distance of darts, spears, slings ... Developing him as a social being led to new ideas and designs of bows and various kinds of catapults. And most recently by the standards stories the most perfect firearms throwing weapon appeared. It should be noted that each person lives and develops in a society of his own kind, adopting the customs and habits of his direct ancestors. Including in the field of defense and attack. For many centuries, people taught their children how to use weapons, using for this “childish” reduced copies of real swords, bows, and guns. Used in this process and special devices that develop children's agility, accuracy and strength. To these should be attributed and simple device, familiar in the last hundred years, probably every boy slingshot. Most of us see in a slingshot only children's fun, but not a full throwing weapon. And in vain! Referring to the references. It turns out that there is a clear definition of what this thing is: "Slingshot is the simplest throwing spring weapon consisting of a branched handle, rubber, and a cord where the projectile is inserted." 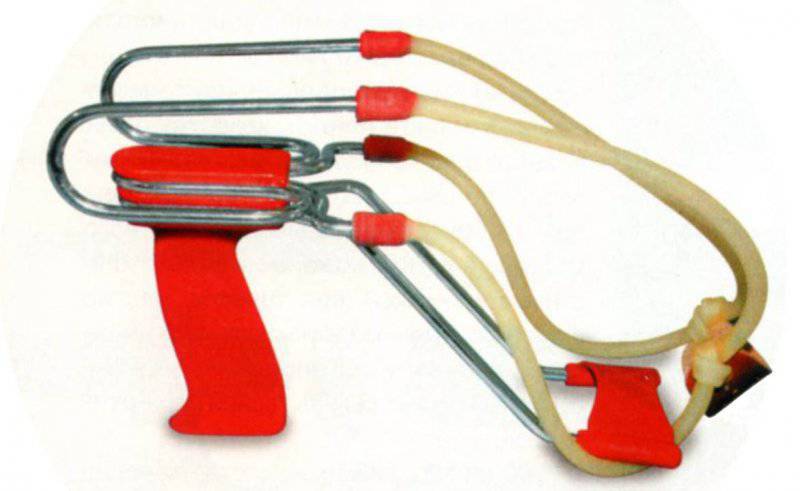 Mod.470.003 - a powerful slingshot of the Italian company Advance with an emphasis for a hand 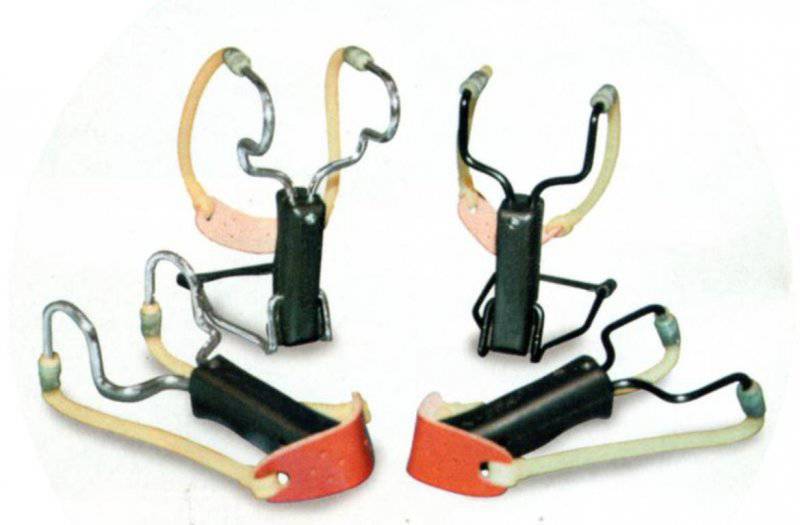 Many Advance slingshots can be produced in a classic form factor or can be equipped with a simple palm rest.

The simplest design of such a device is a flyer made of wood, such as a nut, on which are attached two rubber bands, to which, on the other hand, is attached a wide strip of inelastic material, such as leather. In this strip, the owner lays a pebble, stretches the rubber bands, and then releases the strip. Due to the elastic forces of the ribbons, the pebble accelerates and flies for a rather large distance. This method of throwing, as well as the classical construction of the slingshot, served as an example for the creation by a number of foreign firms of recreational hunting and even military weapons.

Leading positions in the production of modern slingshots are held by Marksman (USA), Combow (USA) and Advance (Italy), which manufacture such devices for both civilian consumers in the ordinary version and for special forces in the form of a real combat system. Slingshot in the ordinary version of the Marksman company They have quite a traditional look, but are produced using modern technologies and materials. The handle of this product is made of impact-resistant plastic of various colors, the flyers are pressed into the handle, the rubber cords are made in the form of cylindrical cords with hollow tips, which are put on the fliers, and the heel is made of synthetic material. The surface of the handle may have recesses for the wearer's fingers or grooves. 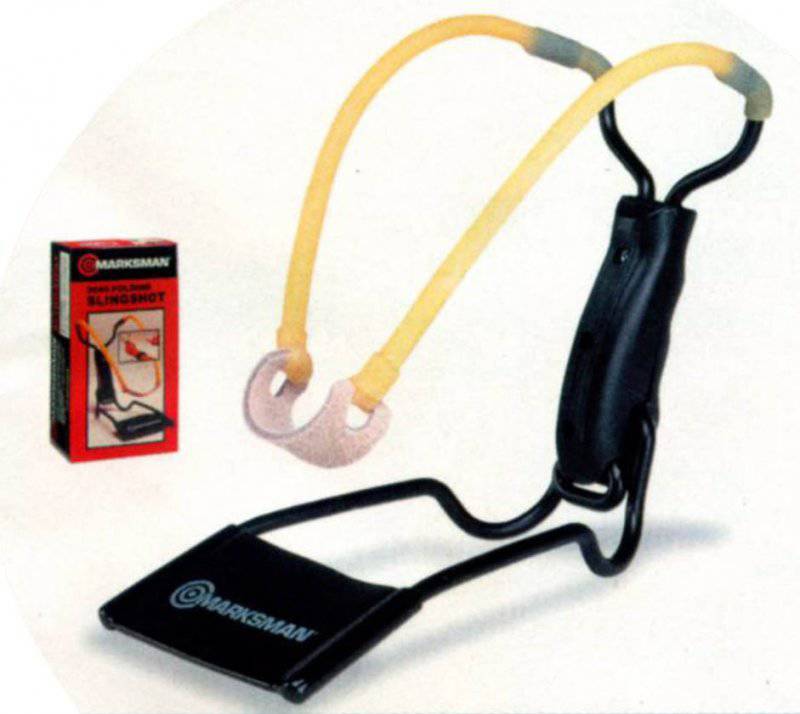 Slingshot 3040 Folding Slingshot from the company Marksman. Its peculiarity lies in the fact that the shape of the frame of support for the hand allows you to rely on it when shooting with the support 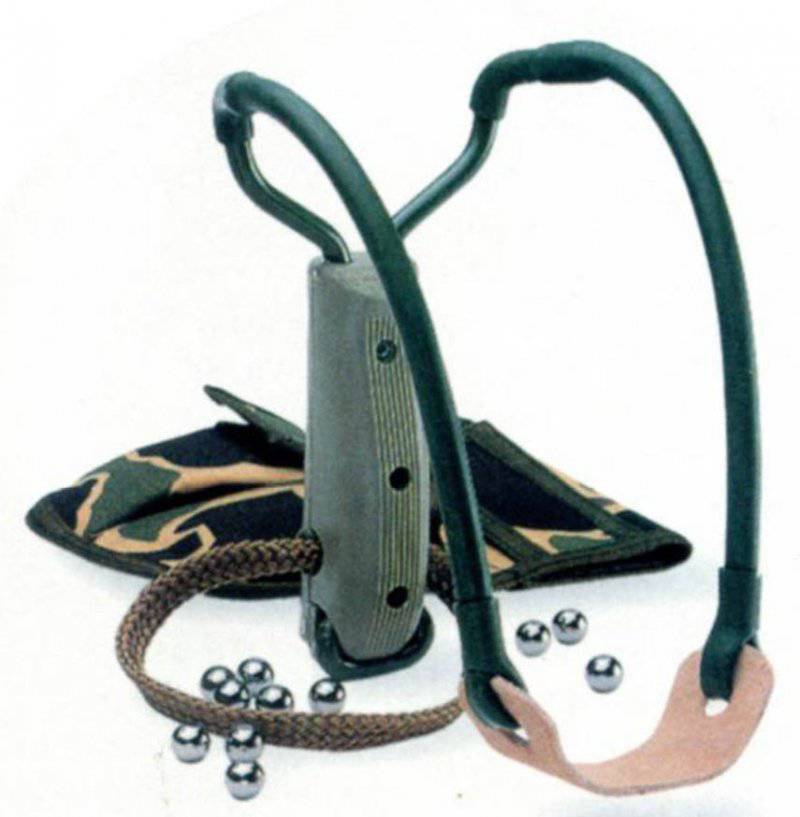 Further improvement of the design led to the creation of a sample on which the flyers are mounted on the upper end of the handle with a special screw, and the ball magazine (with a capacity of 25 balls 6,5 mm in diameter) is attached to the handle, simultaneously serving as a hand for the shooter. Slingshots are available even in the elite version. In this case, the handle is made of precious woods, the flyers are made of high-strength steel with an anti-corrosion coating, two-colored rubber strands, and the heel is made of calf leather. Advance (Italy) supplies the slingshot in the ordinary version for the average buyer to the market. Three basic models are offered to customers: a simple slingshot, a slingshot with a plastic handle and figured flyers and a slingshot with figured flyers, a support for a hand and a special patented fastening of flyers to the body of the handle. For shooting, balls with a diameter of 6,5 mm, 8 mm and 10,5 mm are used. US firms are engaged in the development and production of combat slingshots, and this weapon is intended to equip special forces. A slingshot as a combat weapon has a high efficiency, a relatively long firing range, it is silent and compact during transportation.

The company Marksman has created a military slingshot, having a body made of impact-resistant plastic, equipped with a handle, armrest and a rubber ring for fixing this weapon on the arm. At the head of the case there are special washers for fastening the yarns, which are fixed using special locks. The heel is made of genuine leather. The shooter is supplied with special glasses. The shooting is carried out with steel balls. In the United States, a special Combow slingshot has also been created, designed to equip the special forces, hunting and training shooting units. In special units, it is used as one of the means of "survival" in extreme conditions.

Slingshot shooting is carried out with balls (or any improvised projectiles), and with a minor revision with arrows. The slingshot consists of a body with a handle, an emphasis for the elbow of the arm, two tubular grip clamps and a throwing block - an elastic band. In the traveling position, the slingshot is fastened with a belt to the belt of the shooter. The slingshot body is made of aluminum alloy, the handle is made of vinyl. Matt body trim. An important feature of the design of this sample was a special device, “the increasing effect of a stretchable rubber band on the throwing body”. In a standard slingshot (without such a device), the rubber band is stretched to 460 mm, and in the Slingshot Combow to 740 mm. It is almost twice as large. When firing a steel ball with a diameter of 12,7 mm, it is thrown at an initial speed of 68,6 m / s, a short hunting arrow with a mass of 0,16 kg - at a speed of 46-61 m / s. The range of the arrow - 137-183 m! Slingshot comes with a holster and a quiver for arrows, which are attached to the foot and made of nylon fabric. Holster and quiver can also be attached to the waist belt. 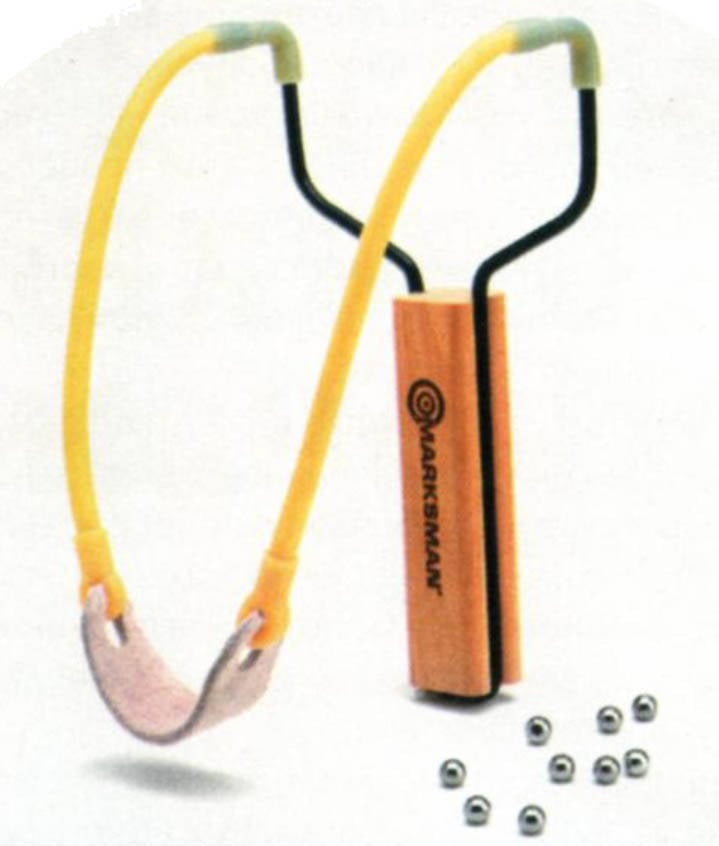 Laserhawk Stealth Slingshot is a superrogat from Marksman. This is a serious weapon. 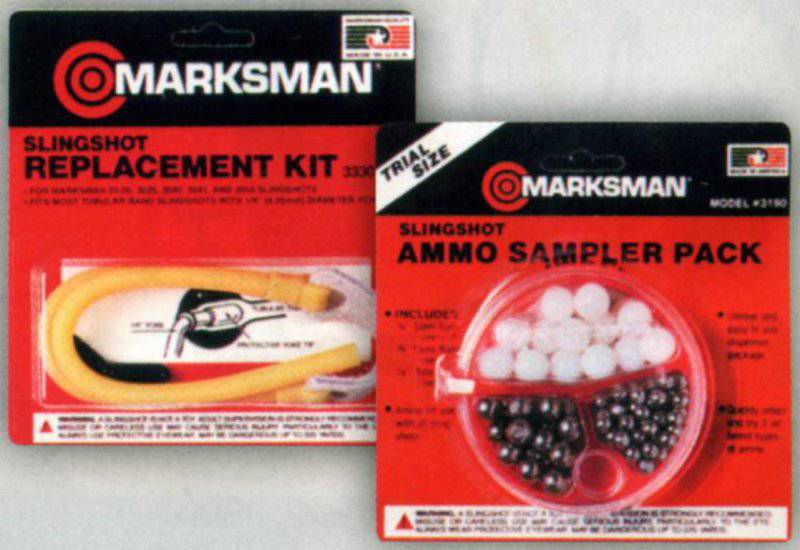 Slingshot combat thing is not cheap! Say, Combow is offered to the buyer in the following configuration: the device itself (at the price of 62,95 dollars), spare rubber harnesses (4,95 dollars), waist belt (52,95 dollars), holster (5,95 dollars), quiver for arrows (3,95 dollars. ), steel balls in the amount of 100 pieces (9,95 dollars) and three packs of hunting arrows (9,95 dollars). As a result, this "children's toy" will cost the future owner a tidy 150,65 dollar. But realizing that Combow is actually a powerful, silent weapon used in special forces and, at the same time, suitable for serious hunting, you agree that the game is worth the candle. So, modern slingshots are created using the best achievements in materials and technologies by foreign companies this is a full-fledged throwing weapon that can cause significant damage to humans. In this regard, in a number of foreign countries, laws have been passed prohibiting selling them to persons younger than 18.

Ctrl Enter
Noticed a mistake Highlight text and press. Ctrl + Enter
We are
Martini-Henry rifle - the most perfect "hardware"Firearms of combat swimmers
47 comments
Information
Dear reader, to leave comments on the publication, you must to register.