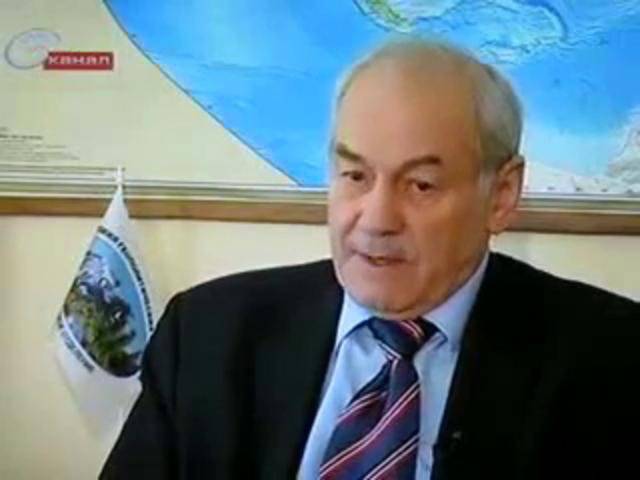 Russian President Vladimir Putin 23 September in Sochi will participate in the regular session of the Collective Security Council (CSC) Collective Security Treaty Organization (CSTO), which includes Armenia, Belarus, Kazakhstan, Kyrgyzstan, Russia and Tajikistan. During the session, it is planned to discuss issues of further strengthening allied cooperation and improving the CSTO collective security system. Great attention will be paid to ensuring the protection of the borders of the Member States, primarily taking into account the upcoming withdrawal of foreign troops from Afghanistan in 2014. Especially for "AN" to the question "Is the struggle for peace now in full swing?" Answered ...

Leonid Ivashov, President of the Academy of Geopolitical Problems, Colonel General, Doctor historical Sciences:
"It is with Russia that the opposition to the policy of the USA is connected"

- Indeed, the struggle to prevent the next Great War today is the main problem for all mankind. Here Russia goes to the first positions in the world space. Today it is with our country that the opposition to the policy of the United States, which is a policy of aggression and fascism, is linked. Unfortunately, China is still cautious (but is following Russia's fairway), and many other countries support Russia. In fact, our country is responsible for maintaining the international security system.

But for the United States, this system is an obstacle to completing the construction of a unipolar world, where the Americans and their satellites will act as world gendarmes, destroying all dissenters and executing those leaders who resist international robbery.
But after the Libyan drama in Russia, politicians and representatives of big business had a sense of danger for their posts, capital, and even their lives. Therefore, in Russia today, there is some consolidated objection to US policy.

Russia must today develop its tactical success in resisting aggression against Syria into a strategic victory and a change in the current situation. For this we need allies, and here, as they say, no need to disdain anyone. After all, each member of the CSTO has a vote in the UN. But, of course, they too are under pressure from the forces of war from the West.

So in the framework of the CSTO, it is also necessary to form a common collective position in the struggle for peace and for the preservation of the international security system. I believe that among the CIS countries and especially the CSTO members there are no opponents to this. But everyone is waiting for the leader, everyone is waiting for a political and diplomatic offensive. And, of course, without reliance on military force, on the defense potential, there can be no strong foreign policy. Therefore, against the background of what the Russian leadership is trying to do today to strengthen its defense capability, it is necessary to use the potentials of all our allies, including the SCO and the CSTO.

“Everyone knows that Tayleran said that politics is the art of cooperation with inevitability.” In collaboration, it is inevitable that the negative consequences of such a policy should be minimized. And for this you need to help the United States in the literal sense, and since we are partners, you need to cooperate with them in a partnership way and pay their attention to the rather rude steps they make, and even mistakes. That is, we need to help the Americans in a partner way to avoid such blunders. True, for this, of course, it is necessary to overcome the powerful resistance of the bureaucracy both in Russia and in the USA.

At one time, I proposed to US senators to create a joint commission to assess threats of this kind, in particular missile ones. They immediately agreed, but then this proposal came into conflict with the positions of the Pentagon and the Russian Foreign Ministry. And it is clear why: their joint threat assessment is much more objective, and the Pentagon, apparently, did not need such objectivity.

And in our Ministry of Foreign Affairs objected to this proposal on the pretext that discussing this issue with the Americans would actually mean recognizing the existence of such a threat ...

Alexander Konovalov, President of the Institute for Strategic Evaluations:
“There would be political will ...”

One pole is the states that are ready to live by legal standards and strive for it, although they sometimes do zigzags, like the USA. And the other pole is a world that is not ready to accept these rules of the game, which is trying to break them. In this sense, Russia, Europe, the United States, and even China are one pole.

If we accept the concept of multipolarity, which is so actively promoted by our political leadership, and we consider any new economically developing region to be the pole, then we will not just make a big mistake. We must understand that all these poles are located along the borders with Russia, and they are developing faster and more intensively than Russia itself.

So if there are many of these poles, we must understand that, in strict accordance with Newton's law, these poles will sooner or later, by the force of their gravitational pull, tear Russia apart.

We need an innovative strategy and market promotion of high-tech products. I understand that our intellect was traditionally concentrated in the military sector. But military markets are very limited, besides, they are shrinking. Sale weapons will not pull our economy: the locomotive is too weak, and the composition is too heavy. In addition, we now spend less on science than, say, Finland. To expect that in this case we will have modern weapons competitive in the markets - this is just a utopia! I do not think that we are competitors of the USA in these conditions.

On the other hand, cooperation with America is also possible in the high-tech field. There would be political will.

Alexey Bogaturov, Director of the Scientific and Educational Forum on International Relations, Honored Scientist of the Russian Federation, Professor at MGIMO:
“In the face of the CSTO, to create the vanguard of the international security system in Eurasia”

- Remember, exactly a week before George W. Bush officially declared victory in Iraq, in Bishkek and it was decided to establish the Collective Security Treaty Organization (CSTO)? It looked like Russia's attempt to react in a certain way to what is happening in Europe.

One might think that the CSTO is an organization created against NATO, but this is already yesterday. In my opinion, it can be assumed that Putin’s entourage decided, through the CSTO, to create the vanguard of the international security system in Eurasia, because this is also where the CSTO specialization can arise.

But the situation in this area is complicated by the presence of China, which is an active participant in the Shanghai Cooperation Organization (SCO).

It turns out that the CSTO overlaps the SCO against the background of a small but quite distinguishable US military presence in the region. Will these bodies compete with each other or will they cooperate? It seems to me that there is a big chance that they will cooperate. But for this they must agree on who is responsible for what. These are practical issues that Russia will have to resolve in the coming years with both the United States and Europe.

Andrei Kokoshin, Deputy of the State Duma of the III-V convocations, First Deputy Minister of Defense (1992-1996), Doctor of Historical Sciences, Professor, Academician of the Russian Academy of Sciences:
“... regarding security in the Central Asian region”

- In my opinion, the Collective Security Treaty Organization can also attract those countries that have common interests with regard to security in the Central Asian region. And who said that it must be the republics of the former USSR?

The CSTO is becoming an attractive organization, and the creation of a Collective Rapid Reaction Force is particularly important for Central Asia, especially in light of the fact that a foreign military contingent will be withdrawn from Afghanistan next year.

Vladimir Rubanov, a member of the presidium of the Council on foreign and defense policy, the former head of the analytical department of the KGB of the USSR:
"Commodity capital controls the greatest resources - from economic to media and political"

- It is known that foreign policy begins at home. But it is not quite clear what is modern Russia in terms of its identity? The problem lies in its terrible split - for many reasons: from value orientations to pragmatic interests. Such a diversity of interests, in turn, raises the problem of the absence of a coherent foreign policy and national strategy.

There are quite clearly formulated and actively pursued interests of the raw capital, which controls the greatest resources - from economic to media and political. He calls himself simply - the elite.

Part of society is fragmented and does not have such resources, and on this basis it is called marginal. I will try to speak out from the standpoint of this “marginal”. The formula “what is good for a raw material company imenek is good for Russia” seems to me that it does not work today. Russia today does not have the opportunity to move to a technology development strategy that would stop its slide to the level of a raw material country.

The technological basis of development is concentrated in Russia in the defense industry, which now operates mainly through operating on the global arms market. But in this market, Russia and the United States are competitors, so the pro-American orientation of the commodity sector and its interests conflict with the interests of the high-tech sector of the domestic economy. After all, the markets for the latter are China, India, Iraq, the countries of Southeast Asia, and for raw materials producers - Europe and the USA. And this internal contradiction is projected into foreign policy.

And a policy aimed at protecting the national interests of an economically powerful state is called "marginal." Hence the calls, such as "Enough about morality, let's count the money!"