Grandmaster Emomali Rahmon, or Migrants, oil and weapons in exchange for the Russian base

23 September 2013
48
At the end of last week, representatives of the Union of Tajik Youth Emomali Rakhmon was nominated as a presidential candidate. In early October, Rahmon marks the 61 year, of which he has been the Tajik president for almost 18 years. In addition, from 1992 to 1994, Rakhmon was Chairman of the Supreme Council of the Republic of Tajikistan. Election of the President in this Central Asian state will take place on November 6. 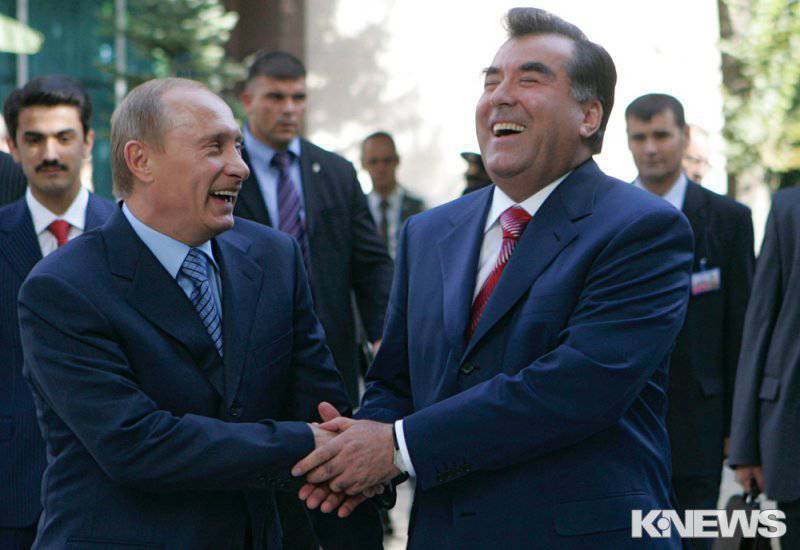 According to the letter of the Tajik Constitution, the new term, if Rakhmon is elected a president (which, frankly, is unlikely), will be his last. But ... Lastly, according to the current Constitution, and this document in the Republic of Tajikistan, as many of our readers know, is very flexible, especially in that part concerning deadlines for the president to be in power. And if today the possible new term of Rakhmon is registered as the final, then nothing prevents the Majlisi Oliya (the Supreme Assembly of the Republic of Tajikistan (I mean the parliament) to make this term not the last).

With what indicators does Emomali Sharipovich approach the new presidential race (although the word “race”, as, by the way, in our Russian version, is hardly suitable for elections in the RT in recent years) ... Unemployment, corruption, low standard of living, almost complete absence developed industry. But all this Rakhmon today manages to skillfully overshadow. How skillful and how does he manage? Let's try to figure it out.

Let us begin with rather unexpected information, which is actively disseminated today by the Center for Strategic Research (CSR) under the Tajik president. Just a few days before Rakhmon’s nomination as a presidential candidate, a high-ranking representative of the SRC, Saifullo Safarov, said that external forces today can focus on trying to split the states existing in Central Asia and create new territorial entities. As one of the areas of preparation by the foreign forces of the hypothetical split, Safarov defines precisely Tajikistan. According to him, Islamist groups can be financed by the same external forces in order to split the two states at once, with the subsequent separation of the so-called “Great Badakhshan” from them. In addition, in the Center for Strategic Studies under the President of the Republic of Tajikistan, they believe that the conflict can be extended to the Fergana Valley, which means that Kyrgyzstan and Uzbekistan will also be drawn into the conflict.

According to the geopolitical experts of the Republic of Tatarstan, the situation with the intensification of the situation of instability around several states in the region cannot be ruled out because the withdrawal of coalition forces from Afghanistan is scheduled for the next year, with certain regional players presenting NATO weapons. Uzbekistan is called as one of such states, and the Uzbek authorities themselves have repeatedly made it clear that they will not even be against receiving military equipment and weapons from the so-called International Security Assistance Force and specifically from the United States. However, it should be noted that today representatives of international human rights organizations (a word that has been giving something doubtful lately ...) to the Uzbek authorities have joined in the fights today. For example, representatives of Amnesty International decided to denounce Karimov that he, he says, is stifling freedom of speech. Human Rights Watch announces that Uzbek women, according to a certain top-secret program, are being sterilized by the government after the birth of their second child, and in Uzbekistan’s prisons literally do not get over political prisoners to whom the competent services do not allow employees of the International Red Cross and Red Crescent. In general, it’s kind of hinting that Islam Karimov doesn’t need to leave weapons and military equipment, but, you know, he will go on strengthening the regime ... Whether they will listen to the International Amnesty and HRW in the Pentagon and NATO is an interesting question ... After all, these organizations solve their own tasks and this means that a conflict of interests is quite possible, as well as a complete disregard for the “fears” of each other ...

But back to Rahmon and Tajikistan. Obviously, Saidullo Safarov announced a possible “mess” in Central Asia for a reason, and that this statement clearly fits with the imminent start of the presidential race. In the presidential race, as you know, any methods are good, and therefore statements about the split being prepared by external forces are a kind of message to the people of Tajikistan, aimed at removing this threat from RT to the choice of President Emomali Rakhmon.

This version is confirmed by the fact that recently the Tajik special services have begun to actively declare the detention in the territory of the republic of terrorist groups controlled by al-Qaeda. Last weekend, the security services of Tajikistan reported on the detention of terrorists who were going to carry out a series of terrorist attacks in Dushanbe. The group included 6 people led by a certain Allamurod Makhanov, who, according to Tajik intelligence services, was trained in one of the al Qaeda camps in the Pakistani province of Waziristan. It is noteworthy that all Tajik terrorists managed to take all six terrorists, as they say, alive and unharmed, and in addition, to withdraw their suicide belts, grenades, an arsenal of automatic weapons and detonation equipment. In general, either this Allamurod Makhanov was a bad student in the school for training al-Qaeda militants, or the Tajik special services are working exclusively on excellent military and political ... Meanwhile, the terrorists are already giving confessions ...

Against this background, another very interesting one has come from Tajikistan. news. Emomali Rakhmon, the same Rakhmon who, for an extremely long time (since last October), was drafted with the signing of an agreement on the extension of the Russian 201 base in the Republic of Tatarstan to 2042, was suddenly granted and sent the document for ratification to parliament. That is, Rakhmon managed to pull a whole year with the direction of the agreement to the High Assembly, realizing that it was better to wait for the pre-election times. Now, the parliament is obviously ratifying the document on the presence of Russian troops in Tajikistan (in Majlisi Olia at the Emomali Rahmon People’s Democratic Party 55 seats from 63), and Rahmon will be presented as a candidate who sees Russia as a strategic partner, which for the vast majority residents of the republic is of considerable importance.

Not only did Rakhmon reach for the ratification of the pre-election “race”, he also played an excellent chess game with Moscow in obtaining economic preferences for future ratification. The Russian authorities made unprecedented concessions: they announced duty-free deliveries of hydrocarbons to Tajikistan, modernizing the RT army at the expense of the Russian budget, and also prepared documents regulating the preferential location of Tajik citizens, who in the Russian Federation according to official census data around 250 thousand, and according to statistical research data various independent institutions - at least 2,5 millions.

In general, today Emomali Rahmon looks not just a president and a potential candidate for the presidency of Tajikistan, but a real grandmaster. He plays the game, which not only will once again lead him to the Tajik political Olympus, but also allow him to receive delicious economic cakes from Russia. 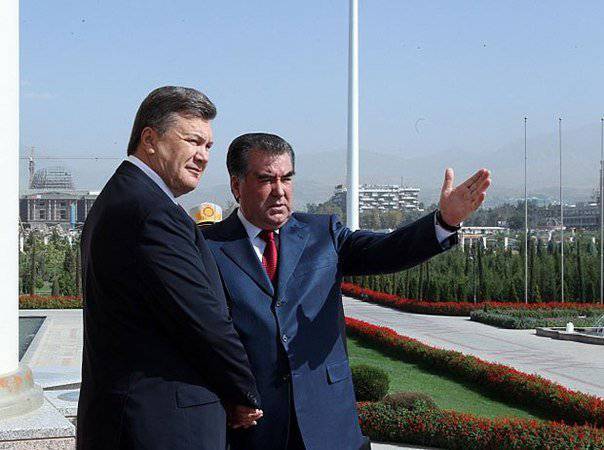 Ctrl Enter
Noticed oshЫbku Highlight text and press. Ctrl + Enter
We are
Tajikistan wants to get out of the influence of RussiaWhy Uzbeks and Tajiks do not take the world
48 comments
Information
Dear reader, to leave comments on the publication, you must to register.