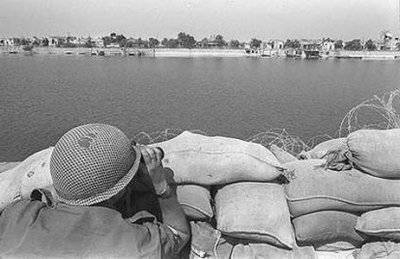 One of the most enduring myths of the Cold War is the theory that 18 July 1972, the Egyptian President Anwar Sadat, "unexpectedly expelled Soviet military advisers from the country." The theory is described in a variety of memoirs and scientific works, from which readers will learn that the Egyptian president “suddenly” decided to expel “impudent Soviet advisers” who, in addition to their unleashed manners, embarrassed Egyptian officers, did not let him unleash a new war with Israel. Sadat allegedly already then, in July, 1972 matured in order to fly over from the Soviet camp to the American camp. Also called the number of “deported” advisors - 15-20 thousands.


The traditional version of the event is compressed, and its perception is then and now set forth in the following documentary work, which in itself is a worthy epoch monument.

In August, 2007, Isabella Ginor and Gidon Remez, published a curious work on the “Distorted term“ expulsion ”of Soviet“ advisers ”from Egypt to 1972. They put forward a series of arguments indicating that the theory of “exile” was created by Henry Kissinger, the Soviet elite, and the Egyptian regime. At the same time, each of the parties proceeded from its specific and momentary interests, but together they managed not only to mislead the public, but also the intelligence of most friendly and hostile states, including Israel’s intelligence. Kissinger owns the “expulsion of Soviet advisers from Egypt” stamp, and for the first time he spoke about exile as one of the main goals of American foreign policy in June 1970.

Ginor and Remez point to a number of obvious discrepancies between dramatic PR pictures and what actually happened.

The first and strong argument destroying the theory of “expulsion” is the mass evacuation of the families of Soviet advisers in early October 1973, on the eve of the Doomsday war - through 15 months after the “deportation” of the advisers themselves.

The reason Sadat decided to send advisers was the USSR’s reluctance to provide Egypt with the newest types. weapons, just does not hold water. The flow of deliveries of Soviet weapons in Egypt not only did not stop, at the request of Sadat he was provided with SCAD missiles, whose technical services and launches were carried out by Soviet specialists.

Even at the time of the “deportation”, it was clear to any attentive observer of the movement of Soviet military personnel in Egypt that this was not about “advisers” —the individual officers of the officers assigned to the Egyptian formations, but about the withdrawal of integral combat units. It was about the Soviet military units transferred to Egypt as part of Operation Caucasus - the rescue of the Egyptian army during the 1970 war of the year. Among the “deportees” was a fully equipped air defense division, several experimental squadrons of the MiG-25, electronic warfare units and special forces.

Relying on declassified American documents, for the first time a proposal for the withdrawal of Soviet military units from Egypt was made by USSR Foreign Minister Gromyko during a meeting with President Nixon in May 1971 of the year. The motivation of the Soviet side remains unclear, but, apparently, the leadership of the USSR, satisfied with the rescue of an Egyptian ally in 70, found it too costly and risky to keep whole combat units on the Israeli front, and decided to limit it to advisers and trainers, who were not in anyone sent and did not withdraw. Around the same time, a similar proposal was received by US Secretary of State Rogers from Egyptian President Sadat. Sadat told Rogers that “Russian land forces will be withdrawn from the country within 1972 months.”

The proposals of Sadat and Gromyko played into the hands of Kissinger, who was in the midst of building a “policy of defusing international tensions.” Within the framework of this policy, the “deportation of Soviet instructors from Egypt” was one of the most important achievements of Kissinger’s political genius — or at least how he described his genius, and with what he remained stories.

In exchange, the Russians and Arabs got what they wanted, namely that America would not dispute the Arab-Soviet interpretation of the UN Resolution 242, which, in their version, demanded the withdrawal of Israeli troops "from all the occupied territories." Gromyko demanded American guarantees that after the withdrawal of the Soviet military units from Egypt, the United States would pressure Israel to go to "the conclusion of a complete and comprehensive peace."

In retrospect, the Soviet leadership made a classic diplomatic maneuver — by offering the opponent something that they were going to do anyway.

Kissinger did not say anything to the Israelis about the coming withdrawal, and on July 18 portrayed extreme surprise and “shock” that he continues to express in his abundant memoirs.

Ginor and Ramirez base their version of events, namely that in July 1972, Soviet military units were withdrawn from Egypt, agreed with the Americans, and not “sudden deportation of advisers” from three types of sources: Egyptian secret documents seized by the Israelis during the War Judgment Day, the memoirs of the Soviet participants in the events and on the declassified document of the Foreign Ministry of Britain, which reflects the perception of the incident from the point of view of the friendly to the Americans, but uninformed intelligence.

Captured Egyptian documents were translated into Hebrew and published almost 30 years ago. Only they are enough to dispel the myth of “expulsion”. The documents show that nothing happened with the Soviet advisers in July. Among them are the work plans of advisers for 1973 year. Other documents demonstrate that the number, military ranks and functions of 1973 advisors of the year were no different from 1972. Some advisers arrived in Egypt in 1971 and remained in the Egyptian parts until May 1973 - without at least a brief recall.

In the spring of 1972, Brezhnev, in preparation for the summit with Nixon, was very interested in cultivating Egyptian ties in Washington. The USSR Ambassador in Cairo, Vinogradov, writes in his memoirs that at the meeting of the 11 Politburo in October 1971, the idea of ​​withdrawing half of the Soviet military personnel from Egypt was approved. On July 16, advisers, in some cases even civilians, were recalled to Cairo by personal order of the USSR Ambassador, Vinogradov. The review was noted by curious observers - for example, the French military attache in Cairo. The same information was provided by secret agents in Cairo to the British military attache Urvik. The secret agent of Urvik, most likely, was the son-in-law of Sadat Marouane Ashraf. Ashraf was an Israeli intelligence agent, as many later wrote, most likely a double agent who merged Israelis into misinformation, and as it turns out now, perhaps a triple agent.

The withdrawal of the Soviet air defense division, stationed at the Suez Canal, was the most dramatic and noticeable event of July 1972. The division was deployed in Egypt in 1969-1970 and consisted of conscript soldiers. The division numbered 10 thousands of people.

There are different versions of what happened, but most agree on one thing - after 10 days of drinking and drinking in Cairo, advisers were sent in their parts. The scale, the simultaneous recall of advisers to Cairo created the required impression that Soviet military advisers did leave Egypt. While it was easy to notice the dispatch of military personnel to Cairo on such a scale, it was almost impossible to spot the return of individual officers — real advisers, and not conscripts in combat units.

The most visible confirmation of the “expulsion” of Soviet specialists for Western intelligence agencies and Israel was the cessation of flights over Sinai and Israel by the then experimental MiG-25 aircraft. Since both the Egyptian and Soviet pilots could control the MiG-21 fighters, it was impossible to distinguish the pilot’s nationality on the aircraft of this model. Unlike the MiG-21, the MiG-25 was controlled solely by the best Soviet test pilots. The withdrawal of the Soviet MiG-21 squadrons from Egypt began in August 1970 of the year - immediately after the armistice. The last Mig-25 squadron was launched on 16-17 in July 1972 and became the most visible “confirmation” of the “exile” theory. Part of the Soviet aircraft, along with instructors, was transferred to Egypt, part - Syria. Since, in any case, the aircraft carried Egyptian identification marks, and the pilots were in Egyptian form, foreign intelligence was not able to fully distinguish the Soviet MiG-21 squadrons from the Egyptian squadrons. Most of the memories of the Soviet pilots say that their units were withdrawn from Egypt until June 3. 16-17 July was the last squadron of the MiG-25.

In contrast to the widespread illusion that the military-technical cooperation of the USSR and Egypt was buried along with the conclusion of the advisers, the facts and memories of the participants indicate the opposite. Andrei Jena was suddenly sent to Egypt at the head of a group of 11 specialists in June 1972. His task was to lead the assembly of the newly delivered Soviet C-20 aircraft, and he was directly subordinate to the Egyptian Air Force commander, General Hosni Mubarak. Jena writes that six weeks after his arrival, he was informed about the end of the mission. Despite this, another two weeks later he was informed about the continuation of the mission “at the request of the Egyptian side”. Jena writes that the streets of Egyptian cities, especially Cairo, Yu are much smaller than Russians: “Our high-rise hotel in Naser City was empty, the Soviet headquarters were transferred to a private villa. We also now lived in a three-story villa near the new headquarters. ”

Kissinger described the “expulsion” of advisers in triumphant terms: “One area where Soviet policy is completely upset and confused is the Middle East. The sudden refusal of the services of Soviet instructors in the United Arab Republic is the final touch to the fact that the Soviet offensive in the region was choked. Their influence on Sadat has decreased. ”

Soviet diplomat V. Marchenko in his memoirs gives a somewhat different and more sober assessment of the incident: “Sadat’s break with the Soviet Union was a more theatrical gesture than a real political reversal. The flow of Soviet weapons and ammunition to Egypt did not stop and did not fall. ”

Based on: The Cold War in the Middle East: Regional Conflict and the Superpowers, 1967-73

Ctrl Enter
Noticed oshЫbku Highlight text and press. Ctrl + Enter
We are
An attempt on the president. How thirty-five years ago Anvar Sadat was killedWar and peace hero
Military Reviewin Yandex News
Military Reviewin Google News
19 comments
Information
Dear reader, to leave comments on the publication, you must to register.