Unexpected turn in the case of the murder of a paratrooper in the Saratov region, or the Unlearned Pugachev lessons

23 September 2013
206
Many of our readers will remember the review of the incident that took place in July of this year in a small town of the Saratov region - Pugachev. Recall, on the night of July 6, a conflict broke out between the local Zotolaya Barrel cafe-bar between Ruslan Marzhanov (a local guy who served as a conscript service in the Airborne Forces) and representatives of the Chechen diaspora of the city. As a result, the quarrel turned into a fight, in which Marzhanov and 16-year-old Ali Nazirov participated. When hot young people were on the street, 28-year-old Ruslan Haydayev stood up for his younger brother (talking about Nazirov). Initially, the investigation considered that during a fight between Marzhanov and Khaydaev, Nazirov literally emerged from behind the back of the latter and began to strike Marzhanov with a scalpel, from which he died on the way to the hospital. It is noteworthy that representatives of the Chechen diaspora, with whom Marzhanov, as it turned out later, were in very warm relations, tried to deliver him to the hospital. Father Marzhanov, answering the question of who is to blame for the death of his son, gave an unequivocal answer: vodka is to blame! 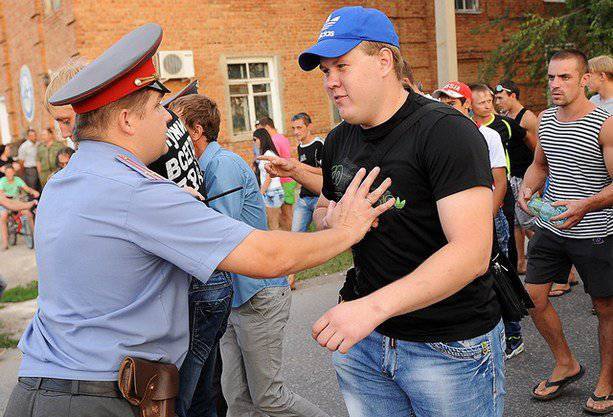 As a result, Ali Nazirov was detained almost immediately, and almost immediately began to confess. In the city began unrest. People who heard the words “Chechens killed a Russian paratrooper” took to the streets with demands to local authorities to put things in order and rein in the Chechen diaspora. Leaders of nationalist movements were going to arrive in Pugachev, but, according to the press service of the Ministry of Internal Affairs, they were taken off trains heading for the Saratov region.

The local authorities realized that they needed to react somehow, and the first thing they did was to introduce something like a “dry” law in the city. In addition, a conversation took place with representatives of the diaspora, after which several (6 people) Chechens left the city, whom the diaspora itself considered aggressive. The number of immigrants from Chechnya in Pugachev is, according to various estimates, from 80 to 100 people with a total population of the city of about 41,5 thousand people.
After some time, law enforcement officers detained three more Chechens who were cousins ​​of a murder suspect: that same Ruslan Khaydaev (28 years), Khamzat Khamdaev (25 years) and Khizir Khaydayev (21 year). A few days later, the fourth cousin of Nazirov 20-year-old Ali Khaydaev was arrested. This young man lived in the neighboring district of the Saratov region, and when police officers came to his house, he tried to pounce on them with pitchforks.

The decision to arrest the Khaydaevs was made after Nazirov, who initially claimed that it was he who killed Marzhanov, suddenly refused all his testimony. At one of the interrogations, he stated that he never held a scalpel in his hands ...

This unexpected turn история received after checking the biography of the Haydaev brothers. It turned out that some time ago Ruslan Khaidayev (the one who had entered into a fight with Marzhanov) managed to avoid prosecution in the case of the intention to organize an act of terrorism against law enforcement officers in the territory of the Chechen Republic. The investigating authorities report that the accused is in illegal possession weapons and for some reason, Khaydaev’s ammunition (we guess, for what reason), the author was declared insane, freeing him from criminal charges. Having recognized the criminal as insane, he was sent to one of the local psychiatric hospitals for compulsory treatment. For a couple of weeks, Khaydaev “fully recovered” and went to Pugachev to relatives living there.

It can be assumed that Khaydaev was offered “to disappear for a while” from the republic, so as not to “hurt the lad” by compulsory medical and other procedures ...

But, as we understand, the “boy” turned out to be not calm, and, barely having time to “disappear” in Chechnya, instantly “showed himself” in the Saratov region.

Today, representatives of the investigation are inclined to believe that the blows with a knife (scalpel), which subsequently led to Marzhanov’s death, were inflicted by Ruslan Khaydaev.

This whole story reveals a whole layer of negativity. First, the opportunity for the criminal to escape both from criminal prosecution and from compulsory treatment is obviously not without the help of “cronyism” or envelopes with bills.
Second: the lack of control over how the decisions of the courts are executed, as, in principle, the complete lack of control over the work of the courts themselves. The judicial system has become a separate state, where its own rules reign (and this is not only in the Chechen Republic), and any attempt at public control rests on the phrase "our courts are independent." From whom and from what are not dependent? I would like to believe that from corrupt sites, but it is believed, sorry, weak ...

Third: the use of diasporas as institutions for harboring criminals, and even for the direct cultivation of criminal groups within these diasporas, while at the same time covering up dark and wet affairs with conversations about inter-ethnic solidarity and tolerance. But what kind of tolerance can there be for criminals, to whatever nation or denomination they belong to?

In general, the investigation into the murder of Ruslan Marzhanov continues. Against this background, the Saratov region is again noted as a region where the situation with the national diasporas is, to put it mildly, not simple.

Now the topic of crimes involving diasporas has surfaced in the city of Rtishchevo, which is almost identical to Pugachev in terms of the number of inhabitants. According to local media, a conflict broke out between representatives of the Kurdish and Chechen diasporas living in the area. The incident occurred near the railway crossing, where several men who were natives of the Chechen Republic, jumping out of the car, attacked the car, in which at that moment there were several Kurds. The attack used traumatic weapons and baseball bats. Result of the attack: beaten half to death in serious condition was taken to a local hospital. A criminal case has been opened into the attack, but the police have not yet identified the perpetrators ... Cars with Saratov riot police arrived in the city.

The conflict between the two diasporas arose for a reason. According to information received from local residents, ethnic groups have been trying to divide spheres of influence for a long time, but, apparently, they have failed to do this. Do not want to give any one or the other. As a result: dismantling in the style of 90-x, which turn a calm city into another hotbed of ethnic clashes.

In one of the local newspapers (the Saratov Reporter), an appeal even appeared to the head of the administration of the Rtishchevsky municipal district, Alexander Saninsky:

Alexander Petrovich! If you can not provide security for residents of Rtishchevo - leave voluntarily. In broad daylight, in the center of the city, in spite of the passers-by and the cars standing in a convoy are made brazen and unscrupulous crimes. Thanks to your connivance growing chaos in the city. Be a man! Find the strength to confess your helplessness!

It is obvious that after just the mentioned conflict between the Chechen and Kurdish diasporas such publications in the Saratov press would hardly have appeared ...

PS Would Pugachev’s “Golden Barrel” have a bloody conflict if Haydaev was where he was determined to be? .. Would this murder happen if the esteemed representatives of the diaspora were not harboring criminals? .. There would be a conflict in Pugachev and in Rtishchevo in the event that local administrations would conduct a direct dialogue with the diasporas in the legal field with, let's say, explanatory work in terms of the need to comply with the law? .. There is food for thought on the topic of "where there is” national crime and Do be such in our country ...

Ctrl Enter
Noticed oshЫbku Highlight text and press. Ctrl + Enter
We are
Lessons from the tragedy in Pugachev
Military Reviewin Yandex News
Military Reviewin Google News
206 comments
Information
Dear reader, to leave comments on the publication, you must to register.