Missile and artillery reconnaissance vehicle: the Azerbaijani version of the modernization of the BRDM-2

23 September 2013
42
Not all countries have a developed defense industry. Therefore, they have to either buy weapons and military equipment of foreign production, or upgrade existing products on their own. A few days ago, Azerbaijani engineers showed the first prototype of a combat reconnaissance and patrol vehicle, which is a development variant of the BRDM-2. A considerable number of such vehicles remain in service with the Azerbaijani army and the new project is designed to raise their combat potential, bringing it in line with the requirements of the times. 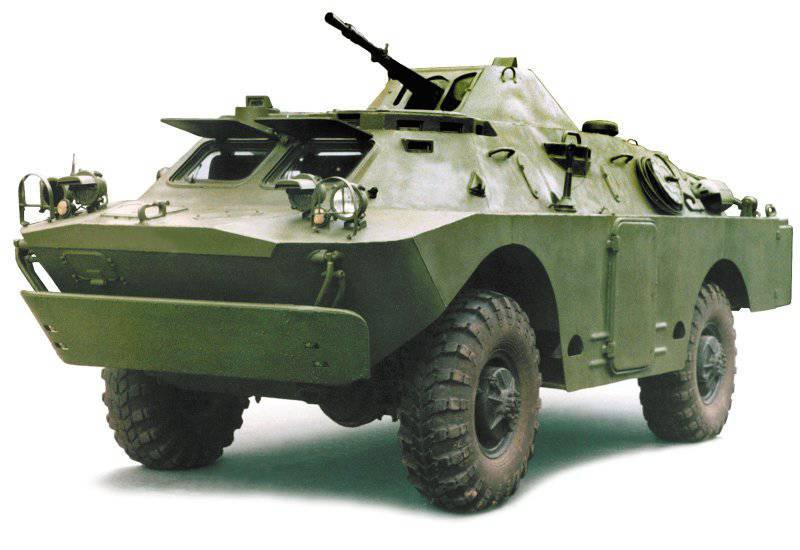 First of all, it should be noted that the designers and industry of Azerbaijan have not the first time taken to modernize outdated armored vehicles built in the times of the Soviet Union. A few years ago, they demonstrated the BRDM-2 with an Israeli-made combat module installed on it. This time, the modernization, the name of which is still unknown, implies significantly larger changes.

The armored case of the base machine has undergone great alterations The shape of its frontal part, sides and aft has changed. Some elements of the updated armored hull with their appearance may indicate that a certain additional booking has been set over the base’s own armor. In addition, as it is easy to see, the Azerbaijani designers removed additional wheels from the machine under the bottom. This made it possible to equip it with a V-shaped bottom, diverting the energy of a mine explosion to the sides. Also, after upgrading the car lost its characteristic windshields with armored casings. Now the driver and commander must monitor the environment through the viewing devices placed directly under the hatch. In addition to the viewing instruments, the machine is equipped with several video cameras located in different parts of the body. The signal from the cameras is transmitted to the monitors in the control room. In the aft hull of the hull there are two hatches for access to the units of the engine compartment. Allegedly, the improved armor case of the combat vehicle withstands the hit of large-caliber armor-piercing bullets.

In the existing photos it is clear that the updated BRDM-2 as a whole has retained the old layout. In front of the armored hull, the control compartment is still located, in the middle one, the fighting compartment, and the stern part is used for the engine and transmission units. However, new equipment was added to the old layout. The car received a diesel engine with 155 horsepower. With the help of a hydropneumatic transmission with a five-speed gearbox, torque is distributed to all four wheels. Such a power plant allows a vehicle with a combat mass of about 8150 kg to accelerate on a highway to a speed of about 110 km / h. On a dirt road, the maximum speed drops to 60-70 km / h. The 150-liter fuel tank allows you to travel up to 800 kilometers without refueling. When upgrading, the BRDM-2 lost not only the extra wheels, but also the jet propulsion unit. Apparently, after modernization, the combat vehicle lost the ability to swim across water obstacles.

To improve the working conditions of the crew in the hot climate of Azerbaijan, the combat reconnaissance and patrol vehicle received an air-conditioning system. The main unit of the air conditioner is located in the engine compartment, at the left side. This placement of the air conditioner raises serious doubts about the effectiveness of its work. It is unlikely that this device will be able to work normally, being in a closed volume (no ventilation grilles can be seen) near the hot engine. To provide electricity to the air conditioner and a number of other systems, the upgraded machine is equipped with a separate diesel generator with a power of 5 kilowatts. 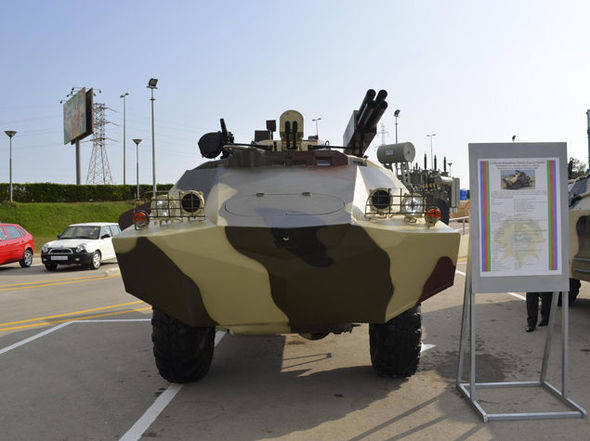 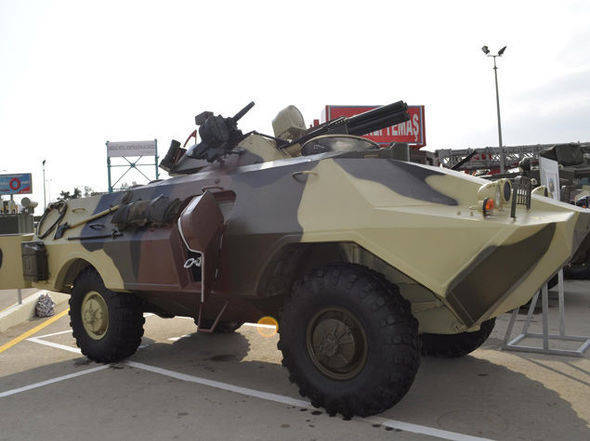 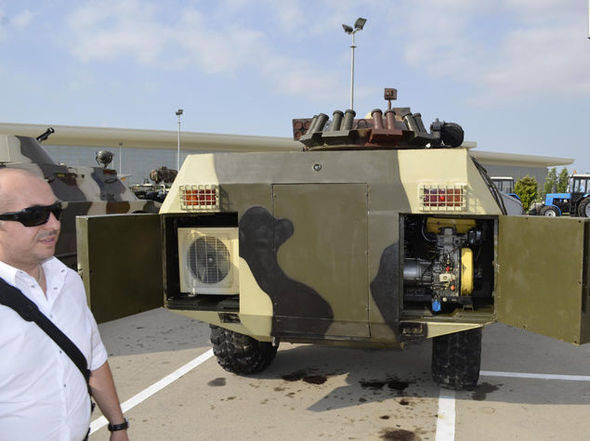 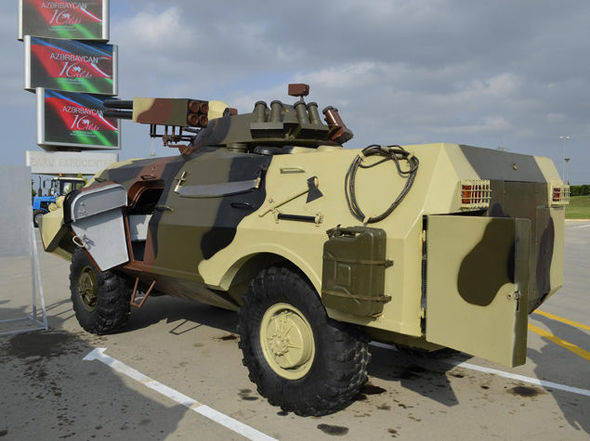 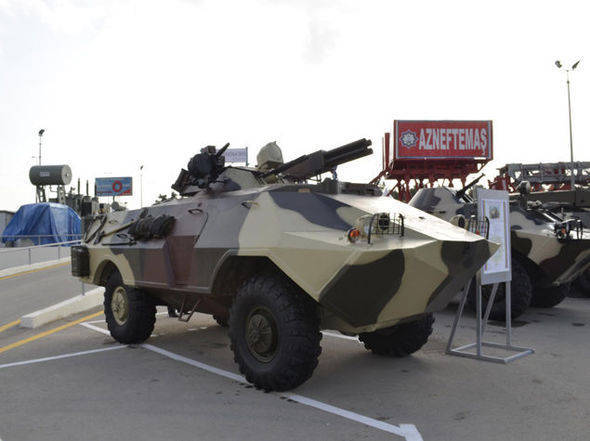 Dramatic changes have undergone a set of weapons reconnaissance and patrol machine. Azerbaijani engineers installed double-barreled in the modified tower aviation gun GSH-23L 23 mm caliber. A gun with a rate of fire of up to 4 thousand rounds per minute is designed to provide the combat vehicle with high firepower. At the same time, a high rate of fire is associated with an increased consumption of ammunition. The capacity for laying shells was not called. Probably, the updated armored vehicle is capable of transporting no more than a few hundred 23-mm ammunition. The barrel weapons complex also includes a 17 mm AQS-30 automatic grenade launcher (Azerbaijani version of the Soviet / Russian AGS-17 Flame) and a 7,62 mm PKT machine gun. Finally, the updated BRDM-2 is equipped with a package of four guides for unguided missiles S-5 or S-8. At the back of the tower there are smoke grenade launchers.

Of particular interest is the guidance system available weapons. It is proposed to direct the double-barreled cannon and machine gun on the target by turning the turret and turret mechanisms. Grenade launcher and package guides have a different guidance system of the original design. They are placed on the outer surface of the tower and also rotate in the horizontal plane along with it. For vertical guidance of a grenade launcher and rockets there is a system of metal rods, connecting the "external" weapons with the "internal" and simultaneously tilting all the weapons in the vertical plane. Thus, all the available weapons of the combat vehicle are aimed at the target simultaneously. Apparently, the same sight is used for targeting.

The modernization project of the BRDM-2 was allegedly completed and implemented as the first prototype solely by the industry of Azerbaijan. Given the state of the Azerbaijani defense industry, one should not be surprised at how strange, unusual and in a certain sense the new development looks doubtful. At the same time, ambiguous applied solutions, such as air conditioning in a closed space, a strange composition of weapons and a no less strange system of its guidance, can not hide the most important feature of the new Azerbaijani project. The fact is that the Transcaucasian state does not have a developed defense industry, but at the same time seeks to improve the state of its armed forces. The result is strange, ambiguous, but interesting and probably viable projects.