24 September 2013
70
The final preparations for the upcoming Russian Arms Expo-2013 exhibition, which starts in Nizhny Tagil on September 25, are being completed. The list of participating companies is already known and information is received on what types of weapons and equipment will be displayed at the exhibition. According to Rosinformbyuro, the concern Tractor Plants will show a self-propelled 2013-XNNXX Sprut-SD on RAE-2. Last news About this project suggest that the exhibition may appear an upgraded version of self-propelled guns. 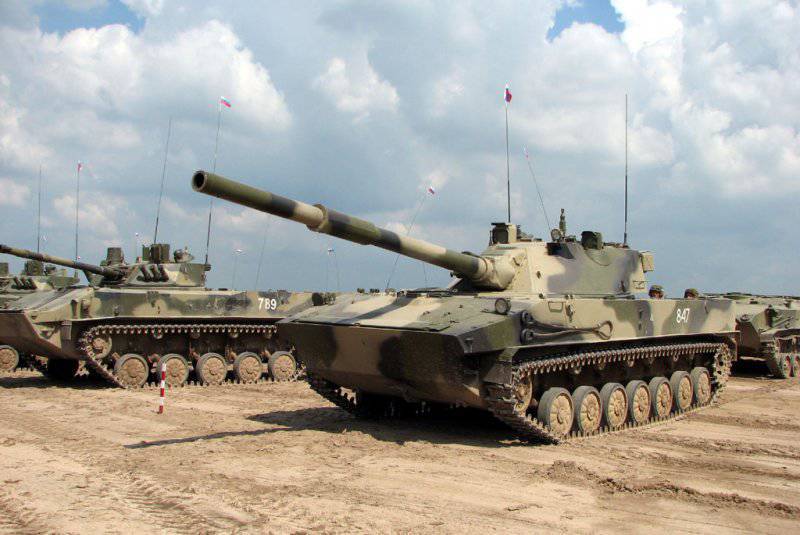 SAU "Octopus-SD" is not a novelty. Project development began shortly after the collapse of the Soviet Union. The Volgograd Tractor Plant and Plant No. 9 (Yekaterinburg) in the early nineties began to create a promising self-propelled anti-tank gun designed to arm units of the airborne troops. The new machine was supposed to help paratroopers fight tanks a potential adversary and other targets for the destruction of which requires a powerful 125 mm caliber gun.

As the basis for the new self-propelled gun, the BMD-3 infantry fighting vehicle chassis was selected. To install a gun turret and all the necessary systems, Volgograd designers modified it. The placement of a large number of relatively large units required an extension of the armored hull. In this regard, the chassis received two additional support rollers on board. In addition, the project used some of the developments created in the framework of the light tank project “Object 934” of the late seventies.

The armored body of the Sprut-SD self-propelled anti-tank gun is generally similar to the BMD-3. It is made of aluminum alloys. The hull provides all-round protection against small arms. weapons, and the frontal projection withstands hit of 23-mm projectile from the distance 500 meters. The tower of the Sprut-SD combat vehicle is also made of aluminum, but its frontal part is additionally reinforced with steel sheets.

In front of the SAU case there is a control compartment with a driver’s workplace. Next to the driver there are seats for the commander and the gunner, on which they are located during the march. When bringing the car into a fighting position, the commander and driver move to their jobs in the tower. The fighting compartment is located in the middle part of the body. Engine-transmission - in the feed. 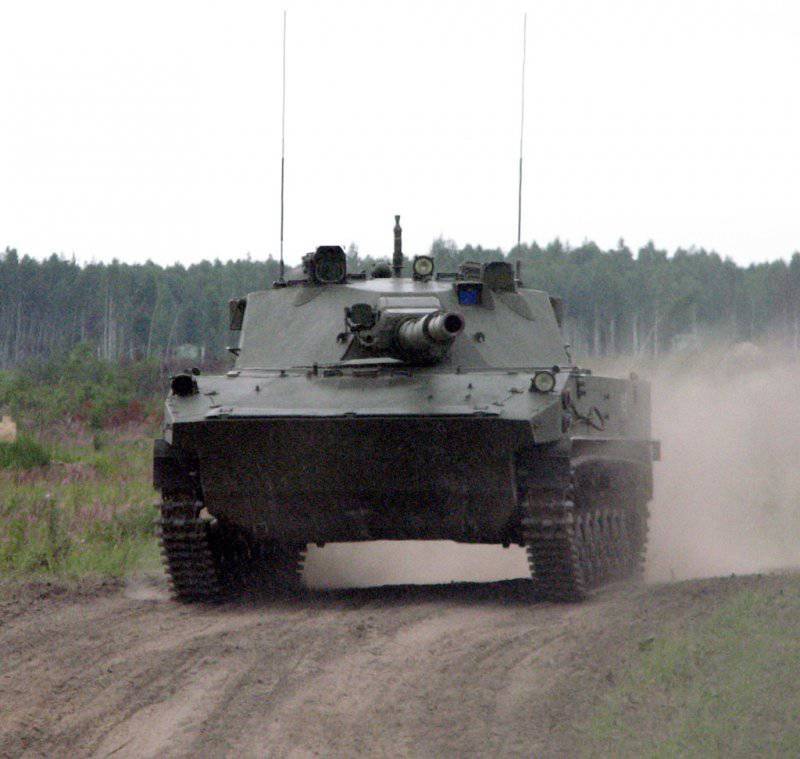 The multi-fuel diesel 2В-06-2 with horsepower 510 installed in the engine-transmission compartment "Sprut-SD". It provides the 18 ton machine with a fairly high power density at the 28 HP level. per ton of weight. Hydromechanical transmission is coupled to the engine with a hydrovolume turning mechanism. The transmission includes an automatic gearbox with five forward and reverse gears. Torque is transmitted to the drive wheels, located in the aft side of the machine.

The running gear of the Sprut-SD self-propelled anti-tank gun is similar to the corresponding BMD-3 units, but at the same time it has a number of differences associated primarily with the lengthening of the vehicle body. Seven road wheels on each side of the machine have individual hydropneumatic suspension. Suspension mechanisms allow you to adjust the clearance of the machine in the range from 190 to 590 millimeters. The running gear is controlled by a driver. Used suspension units provide high throughput and smoothness, regardless of the type of surface.

The power plant and chassis allow the combat vehicle to accelerate on the highway to a speed of 70 km / h. When driving on rough terrain, the maximum speed decreases to 45-50 km / h. Cruising on the highway - 500 kilometers. To cross water obstacles, self-propelled anti-tank gun equipped with two water cannons in the rear of the hull. With the help of water cannons, the combat vehicle can swim at speeds up to 10 km / h. The parameters of the sealed armored hull allow the self-propelled gun to float at an excitement of up to three points and fire before reaching the coast. At the same time, however, shelling of targets is possible only in the front sector with a width of 70 °.

The “main caliber” of the “Sprut-SD” SAU is the 125-mm smooth-bore gun-launcher 2-75. This weapon is a further development of the tank gun 2А46, used on modern Russian tanks. As part of the adaptation of the tank guns for use in light self-propelled guns were used several interesting technical solutions. First of all, it is necessary to note the new recoil devices, which effectively suppress the recoil impulse and provide a rollback of no more than 700 mm. The high-ballistic cannon can use the entire range of available ammunition for 125-mm smooth-bore guns, including guided missiles. Since the Sprut-SD is a self-propelled anti-tank gun, a weapon stabilized in two planes can be induced in a vertical plane only in a limited range of angles: from -5 ° to + 17 °. Horizontal guidance - circular, produced by rotating the tower. 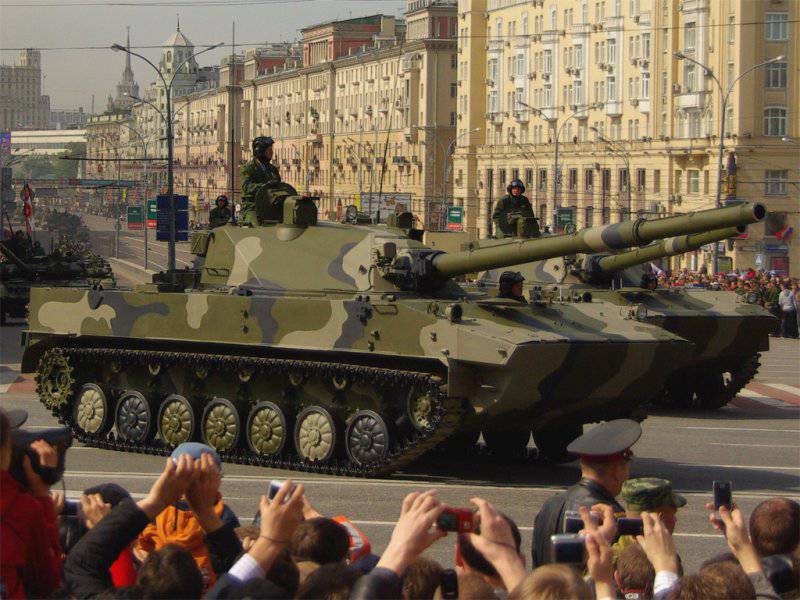 As with modern Russian tanks, the 2C25 “Sprut-SD” self-propelled self-propelled gun has an automatic loader. It consists of a rotating carousel conveyor on the 22 separate-cartridge shots, lifting and unloading mechanisms. At the command of the gunner or commander, the conveyor turns to the desired angle and leads the appropriate type of ammunition to the lifting mechanism. Next, the chain-lifting mechanism takes the ammunition to the loading line, where the disking mechanism sends it to the breech of the gun. First, a projectile is fed into the cannon, then a partially burning sleeve. After the shot and the opening of the bolt, a special mechanism picks up the fired cartridge case pan and throws it out of the fighting compartment through the flap in the rear sheet of the tower. Automatic loader mechanisms are designed so as not to interfere with the work of the crew. The transfer of the commander and the gunner from the management department to the combat department and vice versa is carried out without leaving the vehicle.

In the conveyor automatic loader is placed up to 22 shots of various types. Another 18 shots are stacked. After the ammunition is used up in the automatic loader, the crew can use projectiles from other layouts, loading the gun manually. At the same time, the rate of fire drops significantly.

As an additional weapon, the Sprut-SD self-propelled artillery mount carries a PKT machine gun, paired with a cannon 7,62-mm. In a cartridge case of a machine gun one tape with 2000 cartridges keeps within. 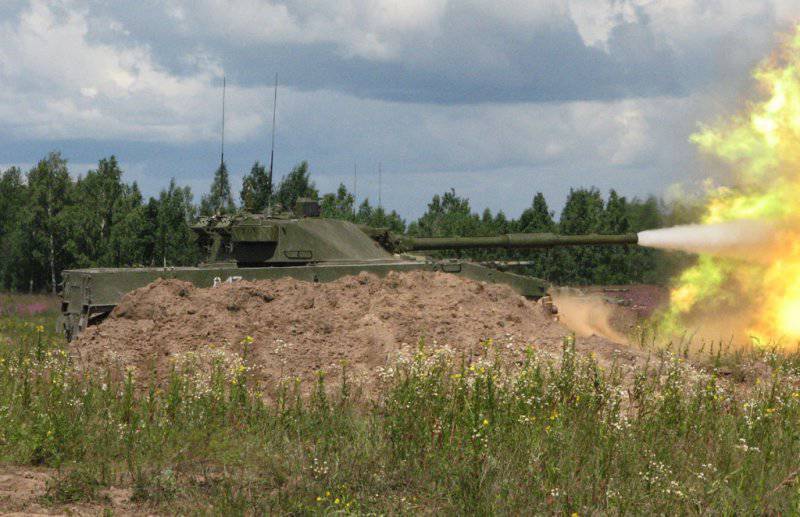 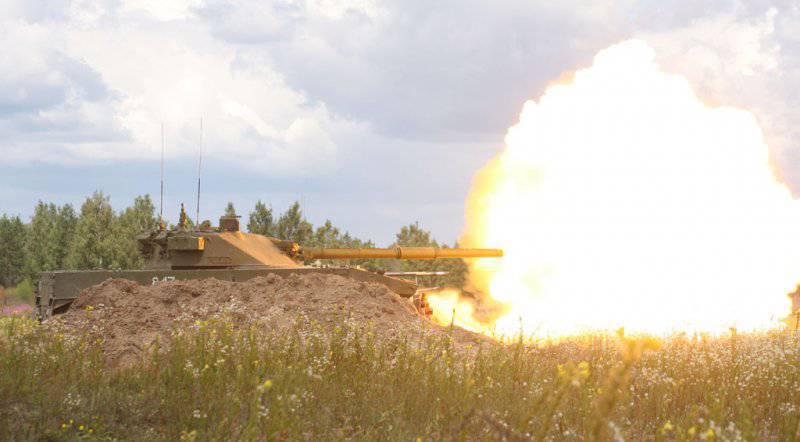 In the middle of the last decade, self-propelled anti-tank guns 2C25 "Sprut-SD" were adopted. Due to their size and weight, they can be transported and paratrooped by Il-76 military transport aircraft. At the same time, each aircraft can take on board two combat vehicles. Unfortunately, the total number of self-propelled guns Sprut-SD in the Russian armed forces does not exceed a few dozen. Moreover, in 2010, there were reports that this type of equipment is planned to be excluded from the list of purchased combat vehicles. As it turned out a little later, the Airborne Forces still plans to purchase and use self-propelled guns, and in the future it intends to receive its upgraded version.

In the middle of August, new photos were shared, showing the Sprut-SD combat vehicle with some large on-board screens. As it turned out, currently the concern "Tractor Plants" is modernizing a self-propelled anti-tank gun. The result of this work should be an increase in the level of protection of the combat vehicle, as well as the unification of a number of units with the newest combat vehicle BMD-4M. Information is also available on a significant upgrade of electronic equipment, including a fire control system.

It is quite possible that the prototype of the Sprut-SD automatic control system with enhanced armor protection will be shown at the upcoming Russian Arms Expo-2013 exhibition. However, in the original non-upgraded version, this combat vehicle is of great interest both for specialists and for the general public.