23 September 2013
114
In the previous Instructions, we showed that the ideologues of the Orange Revolution, led by American Ph.D. Gene Sharp, rely on demagogues in the countries undermined by them, arming them with a network strategy of a "non-violent" coup d'état. The main tool of this strategy is the “progressive import goods” being promoted to the attacked country - the “western model of democracy”. It performs the function of a “Trojan horse”: it “blows up” the country from the inside, plunging it into an acute large-scale crisis, and, as a result, into the abyss of corruption. The next "dish" to the table of "world democracy" is served ...


Orange network policy uses a commercial strategy for the sale of goods by network companies. The fact is that commercialization in the West has spread today to the sphere of politics. Political leaders, from Obama to Cameron and Hollande, have already become “political goods”, which are “sold” to society in elections through political-commercial networks. This proven technology is being transferred by the West to its henchmen around the world.

Ordinary members of political networks, as in commercial companies, receive money and bonuses for "promoting" the main "product" of the network, "selling" it to the public. Therefore, the issues of financing political network companies, the sophistication of “sales” technologies, and the use of the Internet are becoming major issues, pushing aside ordinary political programs and parties. Roughly speaking, in political network companies, the amount of money decides everything. Remember the question of “Brother-2”: “You have a lot of money, and what will you do? “I will buy everyone,” brother-Sukhorukov answers, and this is the main strategy of the grid companies - to buy the greatest number of agitators, and through them the buyers, or the votes in the elections.

In any commercial network company, its “product” is literally a subject of worship, ordinary networkers are required to unconditionally believe in the unique properties of their product, because without such a belief, it will not “infect” the buyer — he will not believe and will not buy a wonderful product. Therefore, network companies really resemble totalitarian sects, and their followers are often simply insane and aggressively impose their goods on customers. On the other hand, the network violently protects its goods from any criticism, does not respond to any arguments.

We see all these features in A.Navalny’s recent political campaign, in which his network “sold” to Navalny’s society. Observers noticed this, and the networkers called him “the witnesses of Navalny”, and in this they are closer to the truth than they themselves write about it, because they write about it “with a smile”, they consider as if frivolous. It is very serious. 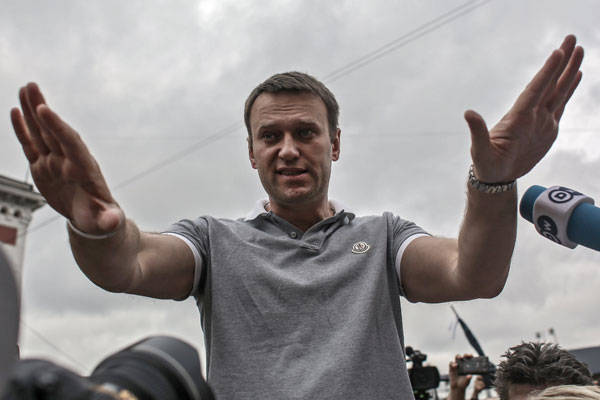 After all, the “product” in network policy is associated with a living person, the leader of the network, therefore the totalitarianism of the political network increases dramatically. And soon we can see real totalitarian political sects, with all the following circumstances ... And there are already political scientists who write benevolently about Navalny, like Zlobin, they directly say that the future is behind political movements, which Navalny opens the door. But they are silent that this will be a new edition of political totalitarianism.

By the way, Obama’s statement about the “exclusivity” of America and its democracy is not a reservation or inaccuracy, it is a statement of the main, unique “product” of the American political network. Political scientists in the United States explain that V.Putin will never achieve understanding at this point from the American man in the street - he understands his dependence on the success of America, his “network”, that is, he is already quite zombied by it.

However, let us return to our main task: how can we annihilate (“destroy”) a political commercial network? To do this, as in the commercial network, you need to debunk its main "product". And this is possible, since it is also its Achilles' heel, since it always seems to be “unique”, with an enormous range of applications. In the political network, it is necessary to debunk both the leader of the “network sales” and the “political product” promoted by the network.

In the case of Navalny, this is obvious, and a scandalous demagogue, with a dark legal past: fraudsters cannot be trusted at all, nothing. Navalny, on the other hand, has a conflict of interests: politics and the “fight against corruption”. Even if such people speak the truth, then only to cover it with another lie. A more difficult task is to expose the "political goods", which is always hiding behind a demagogue, defending them from criticism. Therefore, by the way, “hamsters”, even agreeing that Navalny is a liar, innocently forgive him: “he also contributes to the promotion of Western democracy in the country (political goods), and this alone is fighting Putin’s dictatorship”. The end justifies all means.

The “political commodity” of the West for all of Eastern Europe is the “Western model of democracy”. The spread of Western democracy in the world is the official doctrine of the United States. Although this is not necessary, in the Arab world as a “commodity” of democracy, the United States supports the “Islamic model” (Islamist movements). The fact is that with the help of Islam (Sharia), it is impossible to control modern society, even in Egypt, Islamic “democratic” rulers deprive the country of development prospects, cannot cope with the country's technological, secular problems, and destabilize society; which is what happened in Egypt, and ended with the military coup of General Al Sisi. The same problem threatens to blow up Turkey, where secular national social forces are opposing Erdogan’s Islamists for the same reason.

The “Western model of democracy” is the same simulacrum, in principle, like the “Islamic model”. There are American, French and other “democratic mechanisms” of governing society, but there is no universal “Western model”. All working models are adapted to specific countries, historically, and therefore work.

“Model democracy” as an aggregate of the best, is nowhere in the world, it’s like sewing a jacket, and declaring that it is suitable for any person. For each person, the jacket must be customized, as well as the "democratic mechanism" is individual for each nation. But the “democrats” cannot say about this - then, after all, you are not selling “universal democracy”, and they simply lie to us about its universal values ​​that this “democratic jacket” can be put on any country, people.

When the “model democracy” is put on the country, it binds all its life movements, needs, aggravates all problems, gives rise to unprecedented corruption, but for dogmatists from democracy, liberal reformers, this is another reason to accuse their own people of barbarity and immunity. to “normal” democratic institutions ...

However, more importantly, in the West, the “democratic mechanism” with its election, parties, separation of powers and other things is just a facade, behind which lies the “ruling class”, a certain oligarchic republic grouping. A kind of United America CJSC, whose shareholders are the real power, non-elected and irremovable, hiring US presidents through elections to perform representative functions.

The presidents are well aware that they are “caliphs for an hour,” that you can always impeach the president, at worst you can kill him (like Kennedy). This may seem strange, but in Russia today there is more political freedom than in the USA: our home-grown “Occupy” participate in elections, are represented in the AP of Yaroslavl (Nemtsov), and in the homeland, in the USA, they are dispersed.

Further, the “democratic mechanism” cannot work by itself without the control center in the form of United America CJSC. After all, in order to manage, we need, as Woland said, at least some plan, a program for the foreseeable future. And this plan cannot depend on the arbitrariness of the next demagogue who has won the presidential election.

To the world, the West offers “democracy as the power of the people,” that is, the power of demagogues a la Yushchenko or Saakashvili. Having come to power, they overturn the country in a crisis of “model democracy”, the country becomes “democratic” and, as it were, naturally begins to need external management from United America CJSC in order not to fall apart from the arbitrariness of its own demagogues. (It was “United America” that helped “to leave” those who did not live up to the hopes that lost their rating, Yushchenko and Saakashvili, replacing them with other people.) This is how the sales circle of this “Trojan horse” - the “western model of democracy” closes with network orange companies, and CJSC United America "extends its rule to the next young" democracy. "

The only way out for a country subjected to such ideological aggression is to spit on “model democracy”, and urgently push the “democratic mechanism” to suit you, as is done in Western countries, that is, to move on to an independent “sovereign democracy”. What Putin did with his like-minded people, for which he received the title of "dictator" in the West, and called Russia "an authoritarian country." This is absolutely logical: the public refusal of the sacred democratic product CJSC United America is a sacred crime in terms of the uniqueness of this commercial offer.

If Russia managed to get rid of this "straitjacket" - the "unique" democratic jacket, Ukraine is still in it, and therefore already in step (we will be optimists) from colonial status. However, every abomination has its limits, and the orange "controlled chaos" is controlled only to a certain extent. Orange demagogues quickly lose the confidence of the people, and then the power, as happened in Russia, and recently in Egypt. Let's hope that sooner or later this will happen in Ukraine. The resources of United America CJSC for all their demagogues in the world are clearly not enough: the global financial crisis is knocking at all ...