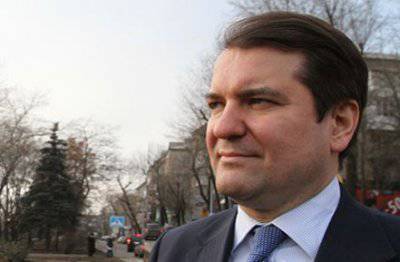 
I appeal to you as a representative of the ruling party, directly responsible for what is happening in the country, the party itself, which, if you remember, has always put good-neighborly relations with fraternal Russia at the forefront of its campaign.

I am sure you know that this question is not an empty sound for your voters. They can now tell you, manipulating with numbers, about the broad support among the population of the idea of ​​unrealizable “European integration”. You may be told that now the supporters of the signing of an agreement on the phantom “association with the EU” are more than those who support the idea of ​​Ukraine joining the Customs Union with Russia. But ask the same Yevhen Kopatko, who recently conducted a solid study of Russian-Ukrainian relations: how do your voters directly relate to this choice - those who voted for the Party of Regions, for its representatives, for Yanukovych? And you will learn that the overwhelming majority of the Party of Regions ’basic, root electorate has advocated and is in favor of closer integration of Ukraine with Russia, and not with the European Union! They believed, they consider and they will consider Russia the closest ally, and not the enemy, no matter how many Ukrainian mass media, busting against Moscow, may work.

In this regard, ask yourself a question: where are you going to be elected for the next deputy term? What will your party and President Yanukovych come to with the election of the 2015 of the year? Do you really think that your voters will forgive you for the deterioration of relations with the Russian Federation? Recall that representatives of the Party of Regions have argued over the past few years! On all airs and round tables, at meetings with voters and in the press, you emphasized that “European integration” is possible only if fraternal and friendly relations with Russia are maintained. And nothing else! And now Moscow itself, through the mouths of top Russian leaders, insists: the agreement on “association” with the EU in the form that is literally imposed by Brussels, will drastically weaken Russian-Ukrainian relations, will eliminate the possibility of Ukraine’s participation in integration projects with CIS partners. Do any of you think that Putin is bluffing about this ?! Do you really not understand that, having crossed out the path to the Customs Union with this destructive agreement for Ukraine, do you lose your support among your base electorate?

Really, after the meeting of the PR faction with the president and after his words that the opponents of “European integration” “blamed themselves”, you did not understand that a project was launched on the actual discharge of both the party that you represent and President Yanukovych himself? Someone is actively working to ensure that by 2015, the current president has been deprived of support among his constituents, and the Party of Regions has lost all influence in his land - in the South-East of Ukraine. Perhaps, Yanukovych managed to instill the idea that by flirting with nationalist, anti-Russian, pro-Western currents he would gain points in the West of Ukraine, without losing much among his “God of the given” electorate. But you, I hope, understand that, no matter how much Yanukovych and your party flirted with the nationalists, you will not become “yours” for the West. The repetition of the project “Kuchma-1999” in the present conditions is impossible for a number of reasons. If only because for this purpose, it is necessary not to deduce the second place, as it is done now, but a person against whose background in the eyes of Galicia Yanukovych will seem to be a lesser evil. But you agree that before the 2015 year, this can not be done?

Why do you and your party lead to 2015 year? With its “pro-European” and, in fact, anti-Russian actions and statements, the authorities kill all confidence in the Party of Regions and Yanukovych in the South-East, completely demoralize and demobilize the basic electorate, not receiving anything in the West. You lose the support of the most active part of the population in your regions, those people who supported you in the most difficult moment. Yanukovych to the presidential election will remain virtually without any strong party!

Who benefits from this scenario? I have no doubt: those who influence Yanukovych more strongly than on the processes within the Party of Regions and the PR faction in parliament. Levochkin, Firtashi, Arbuzov, playing tricky combinations for retaining and strengthening their personal positions in power, eliminating objectionable politicians within the party and faction aimed at rapprochement with Russia (the case of Igor Markov is an illustration, you won’t make it clearer!) party that does not fit into these combinations. When a faction was told to face you at a meeting to “blame yourself” in the event of pro-Russian sentiment, is this not an indication that the line has been crossed, that the president has actually already been pushed into the path of rejection from the residents of those regions that made him president - a deputy, and from the party, the honorary leader of which he is?

I understand that after the exponential flogging arranged by Markov, many of you will decide once again not to risk, not to be substituted, not to stick out, and dutifully vote for the so-called. “European integration” laws, not only plundering the economy of Ukraine, but also crossing out the opportunity to change the situation for the better in the near future, burning bridges for cooperation between fraternal countries. Many will do it, so that later they will not “blame themselves”. But after all, at least some instinct of self-preservation must work! Think about what will happen to you, with your business, with the people who trusted you, in the event of the collapse of the project called “Party of Regions”! Collapse, inevitable in case of further deterioration of relations between Russia and Ukraine! Worsening, inevitable in the case of the signing and ratification of the agreement on the illusory "association with the EU", giving neither you nor the people of Ukraine absolutely anything but this deterioration!

Dear MP! I understand that your voice and your opinion over the past couple of years have been reduced to a minimum in the faction. I understand that the same Levochkin-Firtash-Arbuzov reduced the role of the Party of Regions itself in decision-making to a minimum. But ultimately, it is from you and your colleagues in the faction that the fate of the document called the “association agreement” will depend. The future of your faction, your party, and you personally depends on you and your pressing the button when ratifying this surrender of Ukraine! After that, “blame yourself” will not be told by President Yanukovych anymore, but by your own voters, for whom friendship with Russia is one of the key factors of choice. And I dare to assure you, this “blame yourself” already very soon will be for you and for Yanukovych himself much more painful than what you heard from his mouth.