The European Union "forgot" about Tymoshenko because of the market 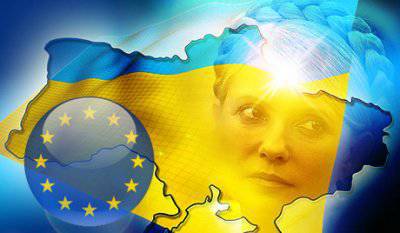 The Yulia Tymoshenko case was a convenient instrument of pressure on Ukraine’s President Viktor Yanukovych. But now, more than ever, the European Union needs a new large market for goods, and the EU’s economic interests have prevailed over the desire to fight for “democratic values”, says Kirill Tanayev, director of the Institute of Modern Media
Europe’s desire to see Ukraine alongside itself is so great that even the question of Tymoshenko will not prevent Ukraine from signing an association agreement with the EU. This was stated by the Ambassador of Lithuania in Kiev Petras Vaitekunas. According to him, the European Union no longer sets such a specific condition. The point is that the laws of Ukraine comply with EU norms and standards.


At the same time, the Lithuanian Ambassador did not rule out possible difficulties with the signing of the agreement because of the still unsolved issue of Tymoshenko. The EU representative in Ukraine, Jan Tombinsky, also mentioned this in passing.

Why Tymoshenko’s work has ceased to be so fundamental for Europe, Kirill Tanayev, director of the Institute of Contemporary Media, told Golos Rossii.

- It turns out, the European Union turned away from Tymoshenko? After all, not so long ago this question was almost the main condition for concluding an agreement?

- For the European Union, the emergence of a new large market for goods in a crisis is key. In the conditions of a severe recession in which the European economy is located, additional actions are needed, which allowed at least to somehow revive the economic situation in the eurozone countries.

How Ukraine will turn out to be just such a resource is a difficult question. But politically, the European Commission, Brussels, the European bureaucrats show that, they say, you see, we are trying. The Tymoshenko case was convenient for putting some pressure on Viktor Yanukovych, but when it came to serious material interests, no one in Europe was interested in Tymoshenko, it was always clear.

- It turns out, for the sake of its own interests, Europe even forgot about justice and legality, about which she spoke so loudly?

- Of course. The case Tymoshenko Yanukovych, of course, no one will forgive. It will always be a black mark for him. But in this situation, it is more profitable for Europe to close its eyes to this.

- But is it possible? After all, she was their banner, symbol. And now the European Union actually refuses to protect it?

- I will answer the first question: it means you can. And on the second I will say that it has never been a banner or a symbol. Europe towards Ukraine has been extremely cynical over the past twenty years. When it is profitable for her, she supported some, when it is not profitable, she supported others.
In addition, during Yushchenko’s presidency and Tymoshenko’s premiership, Ukraine’s advance towards the European Union was zero. There was a lot of rhetoric, words, but there was no business. And Viktor Yanukovych, whom they considered their political, ideological, and other enemy, turned out to be the man who did all this.

- Does the EU have other ways to put pressure on Kiev on the issue of the release of Tymoshenko other than signing an association agreement with the EU?

- Of course, over time, pressure will be exercised through the European Parliament, various statements will be made, unpleasant words will be pronounced. Kiev will be required to comply with a variety of provisions that implies an association agreement. But Kiev does not care.

Ukraine behaves very simply. It confronts everybody with a choice: friends, you have problems in the economy, you need our market - please take us as we are, and we will not do anything, it’s necessary for you. This is Ukraine’s view of the West.

A look at the East is different: friends, see, we have a common movement of our politicians directed to Europe, we look there, Europe takes us. And you do not supply gas to us as it should. Want not want, you have to come to terms with it. The position that Ukraine has taken now, to put all before the fact - what you want, then do it.

- It turns out that the Tymoshenko case has been postponed. Then, when Ukraine nevertheless signs the association agreement, can this case come up again?

- Europe will continue to nudit. Nothing else will be.

- Do you think it is possible that Tymoshenko will sit until the end of the term?

- Hard question. We do not know all the behind-the-scenes agreements. Maybe they have already agreed on something, they just do not talk in public. Tell when it will be necessary.

- If Ukraine, after some time, realizes that it has made a serious mistake, will it be able to use the invitation to the Customs Union?

- Complex issue. First, Ukraine did not promise anything special to the Customs Union. Secondly, all her conversations about the Customs Union didn’t go beyond the words “arrange us a special regime of three plus one”.

“It also does not exist, because it is only a political agreement that after the Eurasian Economic Union emerges from January 1 and 2015, Ukraine will be able to receive observer status as part of this union.” Statutory documents of the Customs Union and the Common Economic Space do not imply the presence of observers.

What is the point of giving Ukraine the status of an observer, if it does not seek to join the Customs Union? Her introduction is a very difficult question. Ukraine has entered the WTO on very poor and unfavorable conditions. These norms differ significantly from those on which Russia joined the WTO and on which Kazakhstan enters.

This means that Ukraine, in order to join the Customs Union, will have to substantially revise its relations with the WTO. This will entail substantial financial losses, payments, compensation.